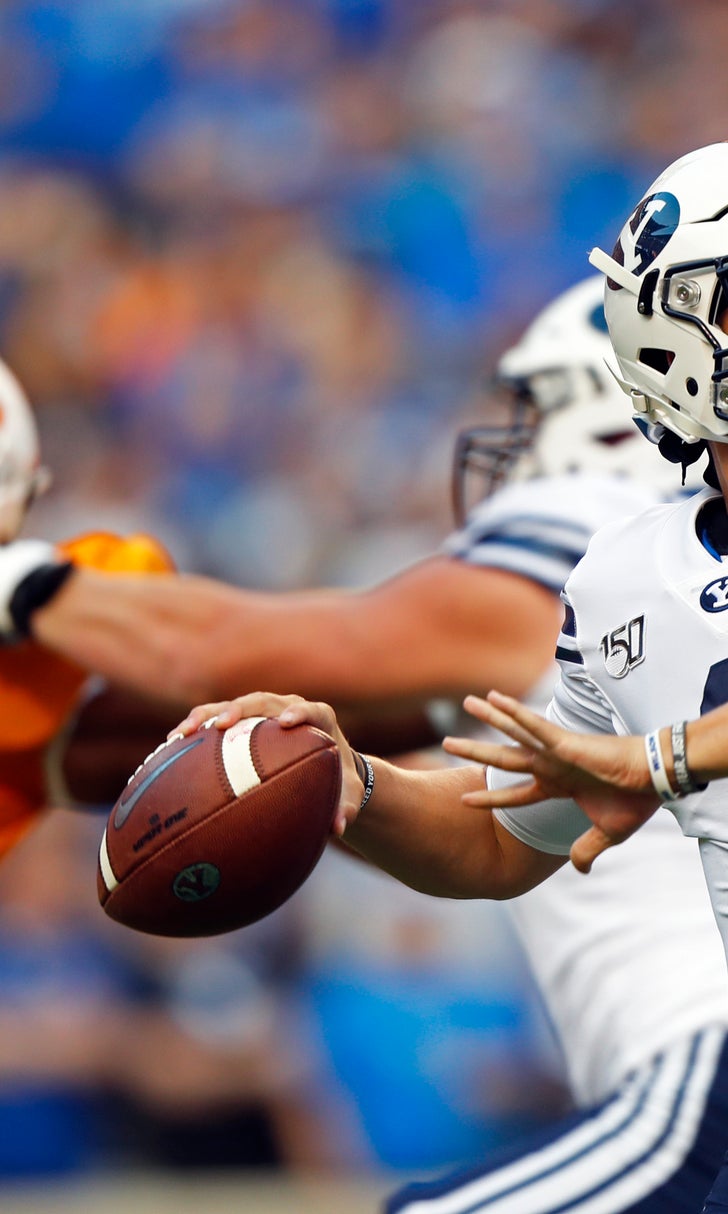 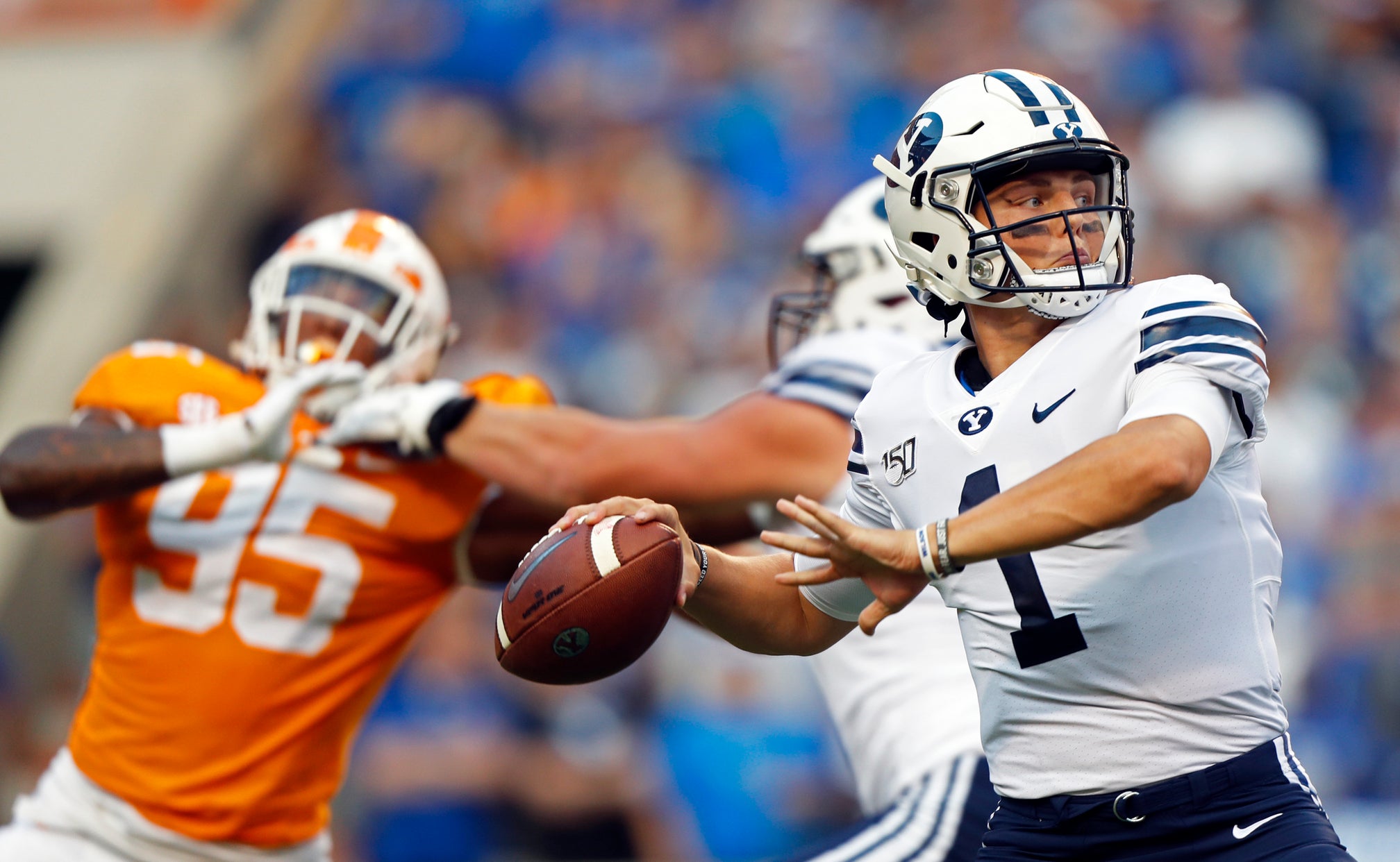 KNOXVILLE, Tenn. (AP) — Finally given time to throw for one of the few times all night, Zach Wilson delivered a stunning pass and helped rescue BYU from near-certain defeat.

Wilson's 64-yard completion to Micah Simon set up a game-tying field goal with one second left in regulation. BYU went on to beat Tennessee 29-26 in the second overtime session as Ty'Son Williams scored from 5 yards out with help from his offensive linemen.

"It's one of those things where all your reads and all your decision-making and what kind of coverage they are in, it kind of all goes out the window," said Wilson, who was sacked four times and pressured for most of the night. "It's kind of like you know what, where can I extend the play?"

The remarkable rally enabled BYU to rebound from a 30-12 loss to No. 13 Utah and avoid its first 0-2 start since 1995 with Southern California and No. 14 Washington looming for the Cougars in the next two weeks.

"Oh, this is huge," BYU coach Kalani Sitake said. "We obviously looked at the schedule and we know games that we want to win and want to perform well. I don't think our guys are proud of what they did last week, but we talk about getting over that feeling, and the best way to do it is play the next week and prepare for it."

Instead, it's Tennessee that is 0-2 for the first time since 1988, when the Volunteers lost their first six games. Tennessee has gone 6-16 over its last 22 games.

Tennessee was trying to bounce back from a humiliating season-opening 38-30 loss to 26-point underdog Georgia State. For most of the night, it appeared the Vols would do just that.

They got 154 yards rushing from Ty Chandler and two touchdown catches from Jauan Jennings. They controlled both sides of the line of scrimmage pretty much the entire game.

Yet that ultimately wasn't enough, thanks to that Wilson-to-Simon connection.

BYU was facing third-and-6 from its own 20 with less than 20 seconds left when Wilson threw deep to Simon, who got way behind cornerback Alontae Taylor and caught the pass just beyond midfield. Simon then raced into the red zone before Taylor brought him down.

"I was on the same side as (Matt) Bushman, who is a really great tight end, so a lot of eyes and a lot of guys were looking at him," Simon said. "I think they just kind of had a mis-lapse in coverage and I got behind the guys and Zach made a great pass."

After Wilson spiked the ball with five seconds left, Jake Oldroyd kicked his third field goal, a 33-yarder that barely slipped inside the right upright with a second remaining.

The Cougars got the ball first in overtime and scored on Wilson's 14-yard touchdown pass to Talon Shumway. Tennessee tied it on Jarrett Guarantano's 13-yard pass to Jennings.

Tennessee opened the second overtime session by settling for Brent Cimaglia's fourth field goal, a 40-yarder that briefly gave the Vols a 26-23 lead.

Then Williams ended it once and for all.

The South Carolina graduate transfer appeared to be stopped just a few yards short of the end zone on second-and-3 from the 5, but he kept running until he crossed the goal line. His offensive linemen pushed him along those last couple of yards.

"I just got in there and just got dirty, just kept my feet moving and was able to get to the goal line and score a touchdown," said Williams, who ran for 92 yards and two scores.

BYU: Wilson went 19 of 29 for 232 yards, but his offensive line must do a better job of protecting him. ... The Cougars must play the first half of next week's game without defensive lineman Devin Kaufusi, who was ejected for targeting.

Tennessee: A young team showed it still must learn how to win as it somehow failed to close this game out. Tennessee needs better production from Guarantano, whose interception early in the second half set up a BYU touchdown. Guarantano threw for 97 yards in the first quarter and just 79 yards the rest of the way.

Tennessee scored a touchdown off a deflected pass on its opening drive when it went for it on fourth-and-3 from the 5, but the Vols failed to capitalize on plenty of other scoring chances.

The Vols lost the ball on downs at the BYU 19 and at the BYU 30, and they also settled for four field goals.

Those missed opportunities eventually cost them the game.

"The bottom line is there's a couple of errors we made in the game that you can't do," Tennessee coach Jeremy Pruitt said. "You can't do. You just don't do. It's tough to win against anybody when you make errors like that. It's a tough pill for everybody to swallow. Everybody worked hard this week, responded the right way."

FOX College Hoops Preview with Titus & Tate
Mark Titus and Tate Frazier sat down with a star-studded cast of college basketball faces to preview the 2020 season.
2 days ago