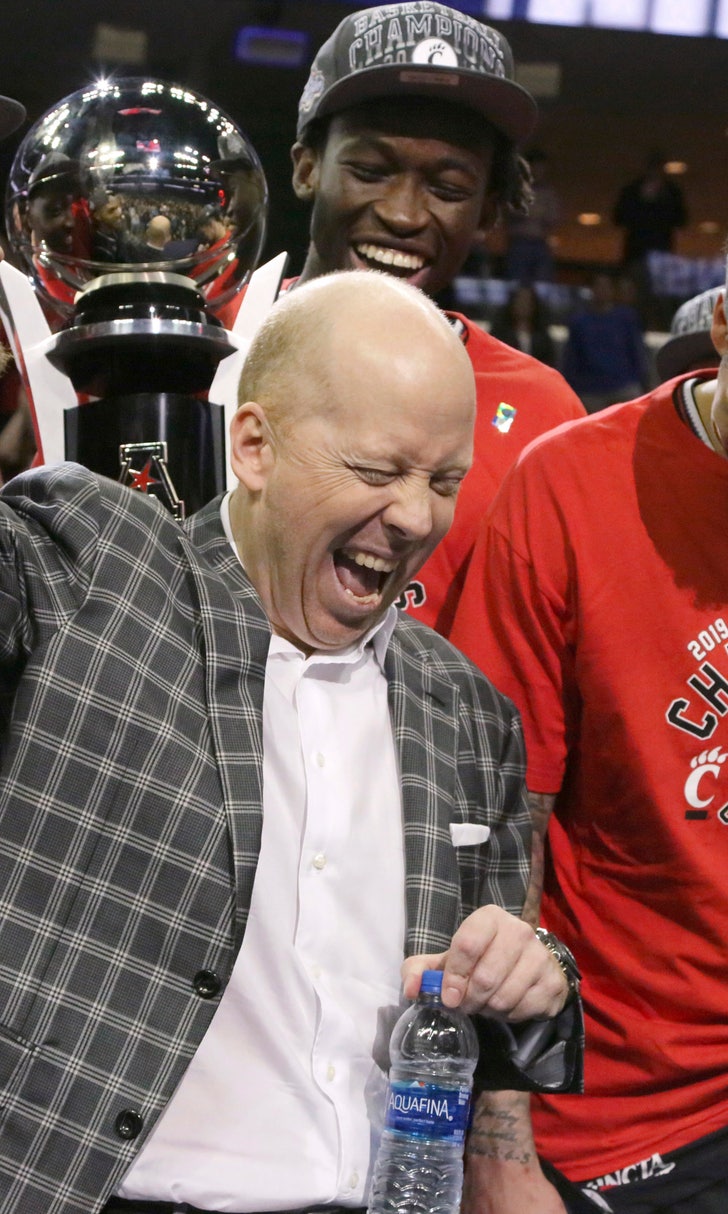 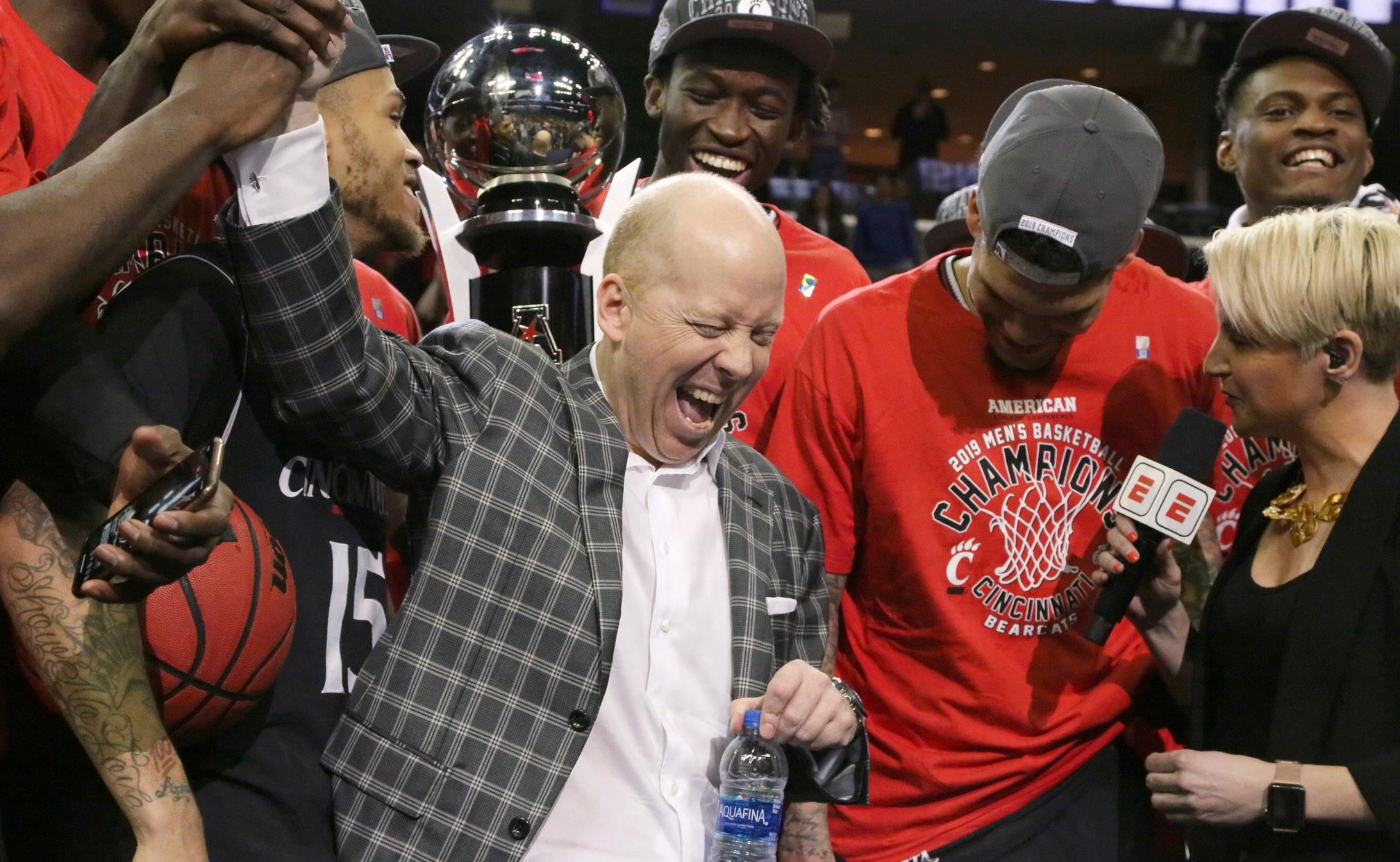 The university said Cronin agreed to a $24 million, six-year deal.

UCLA's search has been marked by a series of starts and stops since Alford was dismissed on Dec. 31. The school had never before fired a coach during the season.

The Bruins were interested in Texas Christian's Jamie Dixon, but couldn't reach a deal because of his $8 million buyout. Then they turned to Tennessee's Rick Barnes, and again couldn't come to terms.

"Throughout what was a thorough and exhaustive search, those of us on the committee repeatedly discussed and emphasized the importance of bringing in a coach who really wants to be here," Myers said in a statement.

So Cronin moved to the forefront.

He had a 296-146 record at his alma mater Cincinnati over 16 seasons and led the Bearcats to the NCAA Tournament in each of the last nine years. However, they made it past the first two rounds just once during Cronin's tenure, earning a Sweet Sixteen berth in 2012.

Twice in the last three years, the Bearcats beat UCLA, including a 29-point rout in December not long before Alford was fired.

The Bearcats went 28-7 this season, winning a second consecutive American Athletic Conference tournament championship before losing to Iowa in the first round of the NCAA Tournament.

"Mick has built a fantastic program at Cincinnati, backed by integrity and discipline, and he has instilled an undeniable toughness in his student-athletes," Guerrero said in the statement. "I am confident he will build this program the right way and lead UCLA basketball back to national prominence."

Cronin, 47, will be introduced at a campus news conference Wednesday.

"UCLA is a very special place with a strong tradition of excellence," he said in the statement. "To be able to join such a world-class institution is truly a privilege, and I can't wait to get started in Westwood."

Alford wasn't a popular hire among UCLA supporters, who didn't think he was an upgrade from Ben Howland, who took the Bruins to three Final Four appearances. They wanted a bigger name.

How boosters react to Cronin and his emphasis on defense remains to be seen. Attendance has also lagged in recent years.

"I have great hopes for Mick Cronin and am confident he understands our values of academic and athletic excellence, recognizing the very high bar set by Coach John Wooden," UCLA chancellor Gene Block said in a statement.

Except for brief stints at Louisville and Murray State, Cronin has spent his career in his hometown of Cincinnati. He graduated from the university in 1997.

His only other head coaching stint was at Murray State from 2003 to 2006, when the Racers were 69-24. Cronin was associate head coach at Louisville under Rick Pitino from 2001 to 2003 and worked as an assistant and video coordinator from 1996 to 2001 under Bob Huggins at Cincinnati.

Cronin returned to Cincinnati as head coach in 2006, reviving the program after Huggins was forced out.

Health issues forced Cronin to miss most of the 2014-15 season as he recovered from an aneurysm that was discovered after he complained of lingering headaches. He returned to his coaching duties ahead of the next season.

Cronin built a reputation as a recruiter who could identify and lure top talent to Cincinnati, including future NBA players like Lance Stephenson of the LA Lakers.

Alford was a solid recruiter as well, although critics believed UCLA underperformed during his tenure.

The Bruins' roster will be depleted by the early departures of sophomores Kris Wilkes and Jaylen Hands, who recently announced their plans to hire agents and declare for the NBA draft.

But next season will mark the return of guard Tyger Campbell and forward Shareef O'Neal, who both missed their freshman year. Campbell had a knee injury and O'Neal had heart surgery. Among the incoming recruits are Jaime Jaquez and Jake Kyman.

Alford was fired after the Bruins began the season with a 7-6 record. At the time, they were mired in a four-game skid that included home losses to Belmont and Liberty.

Alford had a 124-63 record in Westwood after taking over the program in March 2013. The 54-year-old coach won one Pac-12 tournament title but never a regular-season league title, and made four NCAA Tournament appearances, including Sweet 16 berths in his first two years.

But the drop-off was swift for a school that owns a record 11 national championships. The Bruins lost to St. Bonaventure in the First Four last season, the first time in school history that UCLA was relegated to a play-in game.

They failed to make the NCAA Tournament in 2015-16, when the team went 15-17 for the program's fourth losing record since 1948 when Wooden became the coach.

They also didn't make the NCAAs this season under interim coach Murry Bartow, who took over from Alford and guided the Bruins to a 17-16 finish, including a 9-9 Pac-12 mark.