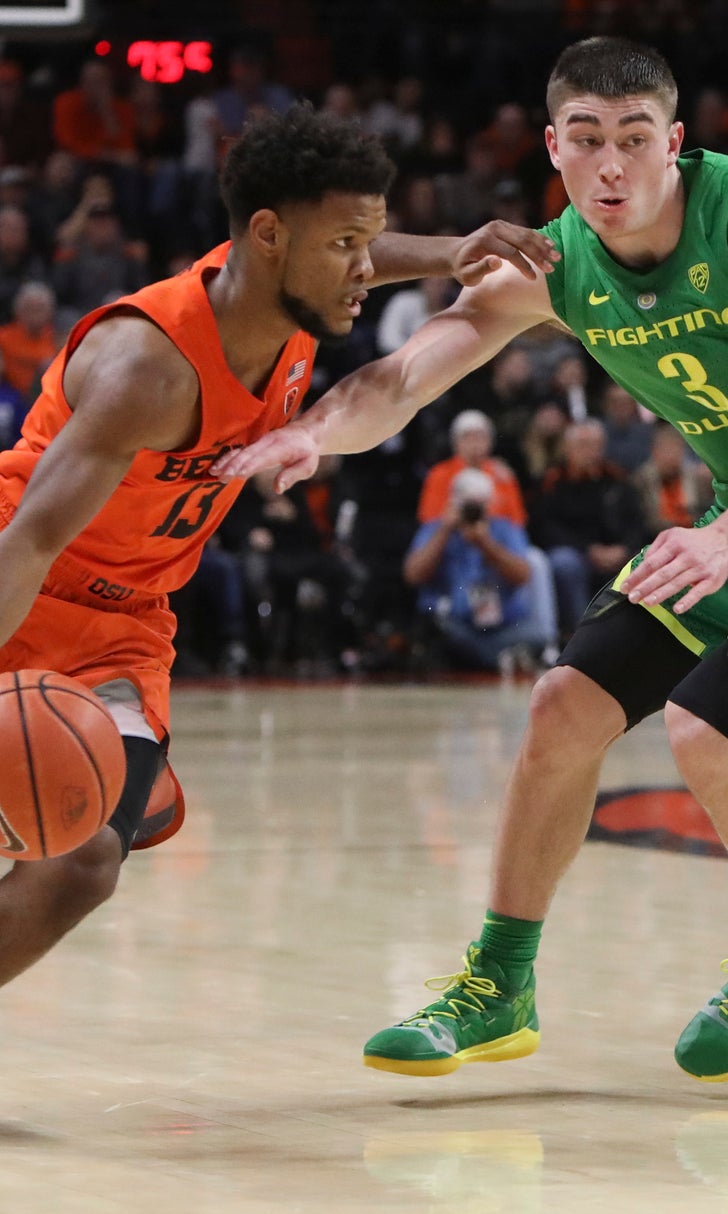 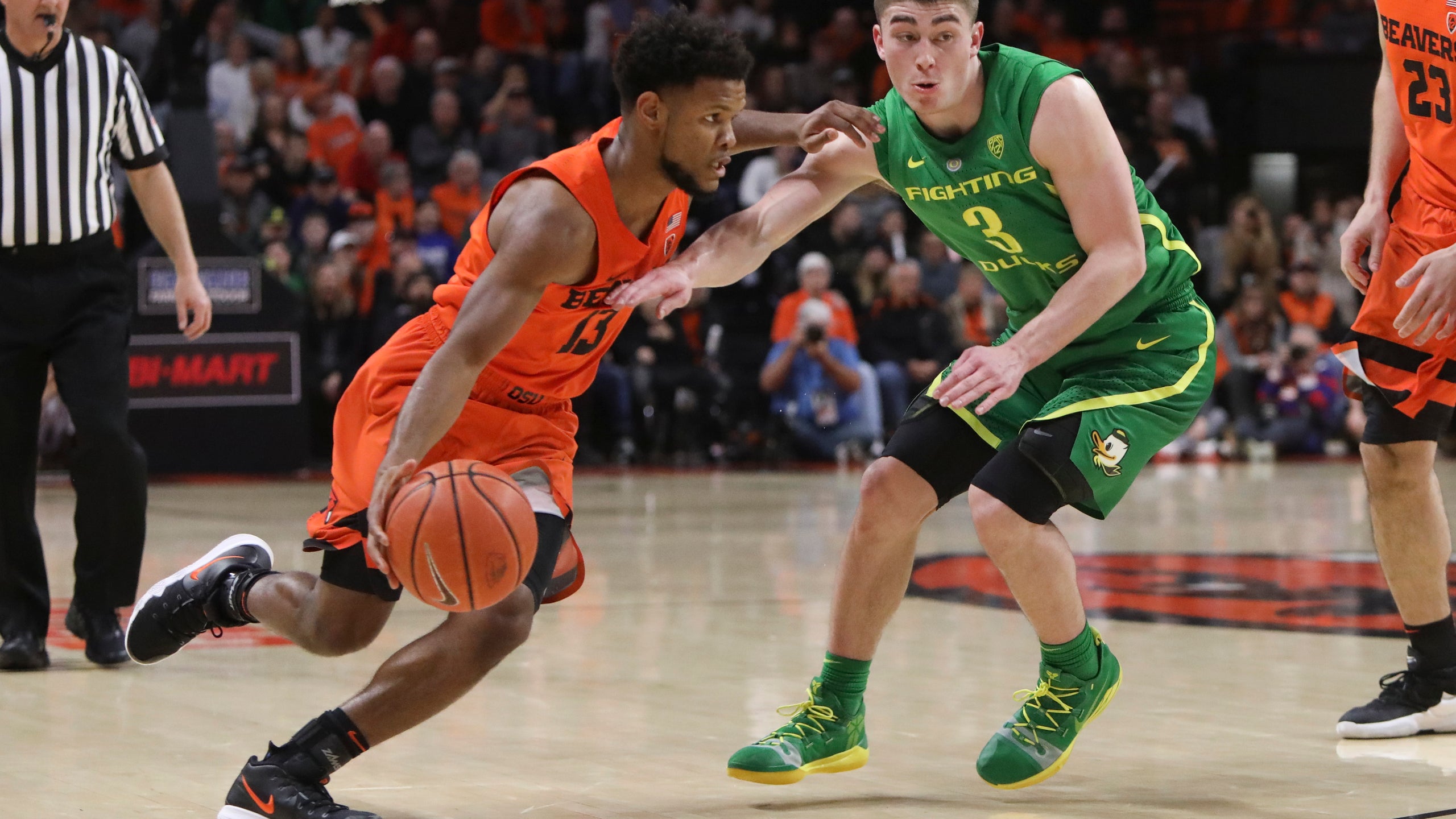 CORVALLIS, Ore. (AP) — For the Beavers, it was more about the league than the rivalry.

Stephen Thompson Jr. had 22 points and Oregon State swept the Civil War series for the first time in nine seasons with a 72-57 victory over Oregon on Saturday night.

Tres Tinkle got off to a slow start but added 13 points and seven assists for the Beavers (16-8, 8-4 Pac-12). With the win Oregon State matched its best overall record through 24 games since coach Wayne Tinkle's first season in 2014-15.

The Beavers moved into second in the Pac-12 standings behind 11-1 Washington. The win also gave the Beavers their best mark in Pac-12 through 12 games since they went 11-1 in the 1989-90 season.

"I will say this, this week was more about the big league game than a rivalry game in our practices, in our meetings," Wayne Tinkle said. "We talked about the way things were going with other teams, we just needed to stay focused on our business and that was winning a home league game here down the stretch."

Oregon State trailed for the entire first half, but back-to-back 3-pointers from Tres Tinkle and Thompson gave the Beavers a 56-46 lead with 5:48 to play. Oregon State went on to lead by as many as 17 points down the stretch.

Kenny Wooten, still wearing a facemask because of a broken jaw earlier this season, missed a practice this week because of the flu but started for the Ducks. Wooten matched his career high with seven blocks in Oregon's 69-46 victory at Stanford last Sunday. He finished with four points, and no blocks, in 28 minutes against the Beavers.

"Bad turnovers, don't shoot free throws at all, and then they score 45 points and shoot 54 percent in the second half, so that's not a very good formula for winning on the road," Oregon coach Dana Altman said following the loss. "We all had a lot to learn and a lot to grow from, but that second half was not pretty."

King had eight points as Oregon built a 12-6 lead to start the game. The Ducks extended the lead to 17-10 with Victor Bailey Jr.'s 3-pointer.

The Beavers got within 17-16 after Gligorije Rakocevic's dunk, but King answered with a 3-pointer.

Tres Tinkle, who went into the game leading the Pac-12 with an average of 21.2 points a game, did not have a field goal in the first half until a 3-pointer that closed the Beavers within 28-25 with just under two minutes to go.

Tinkle added a layup to pull Oregon State within a point and the Beavers went into the break trailing 28-27. King led all scorers at the half with 11 points for Oregon.

Thompson opened the second half with a 3-pointer and a free throw to give the Beavers the lead. Tinkle's layup extended it to 36-28.

Paul White hit a jumper and a 3-pointer and King added a free throw to get the Ducks within 38-36. King's 3 put Oregon the briefly in front, 42-40, but Thompson made a 3 on the other end to give the lead back to the Beavers, and Alfred Hollins padded it with another.

"They were doing a decent job of changing their defenses," said White, who finished with 12 points. "They were taking the middle away for the most part in their zone. But I think, with us, we were just rushing certain shots or just weren't looking for the best just shots. So they played pretty well defensively but for us it was just one of those games where it wasn't going in."

Payton Pritchard was coming off back-to-back 20-point games for the first time in his Oregon career. But he didn't make his first field goal until late in the second half, finishing with four points and seven assists.

Ducks: Freshman center Bol Bol, out for his lone season at Oregon because of a left foot injury, watched from the Ducks' bench. The son of Manute Bol played nine games. ... Oregon went scoreless for the final 3:45 of the first half.

"It was definitely very special, the atmosphere was amazing. With me and G (Rakocevic) being seniors, I know it was extra special for us to get that win on our home court and to be able to sweep in the rivalry," Thompson said about the crowd. "Just really fed off their energy throughout the course of the game."

THE SERIES: It was the 352nd meeting between the in-state rivals, an ongoing NCAA record that dates to 1903. The Beavers hold a 188-163 advantage. The teams split the series last season.

Andy Katz's Tiers: Best Of The Rest
Gonzaga and Baylor are known commodities, but which other teams look poised to make a Final Four run? Andy Katz breaks it down.
17 hours ago