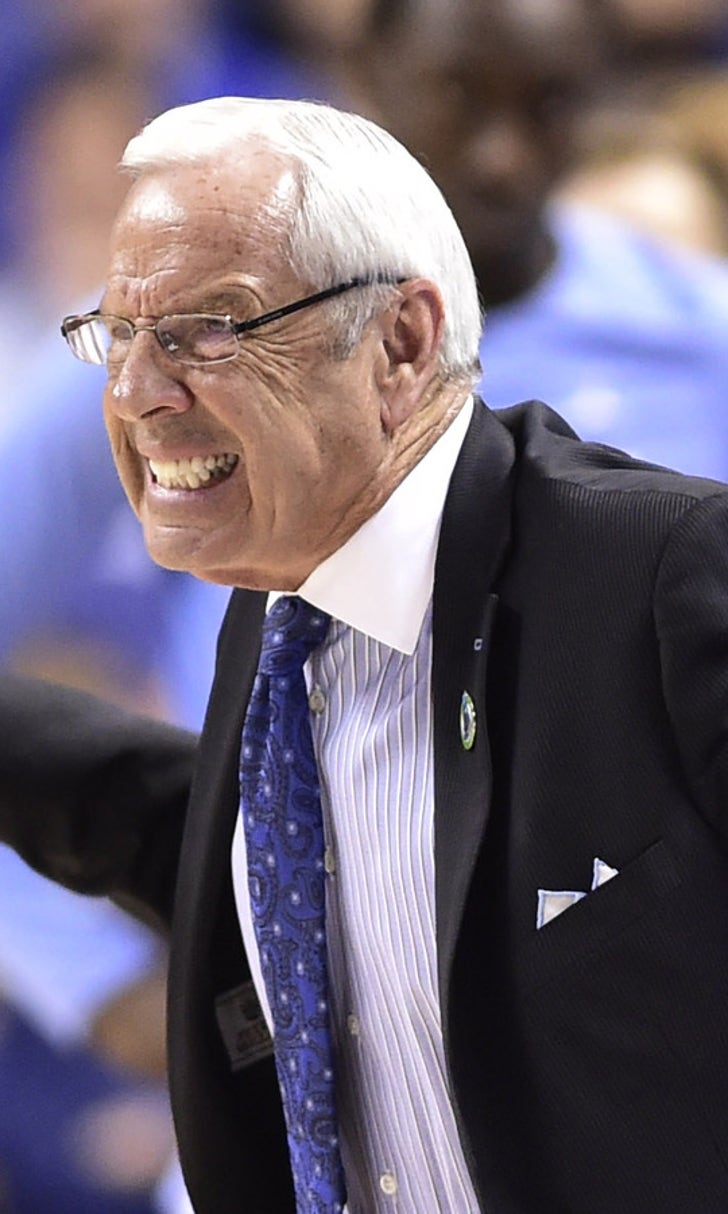 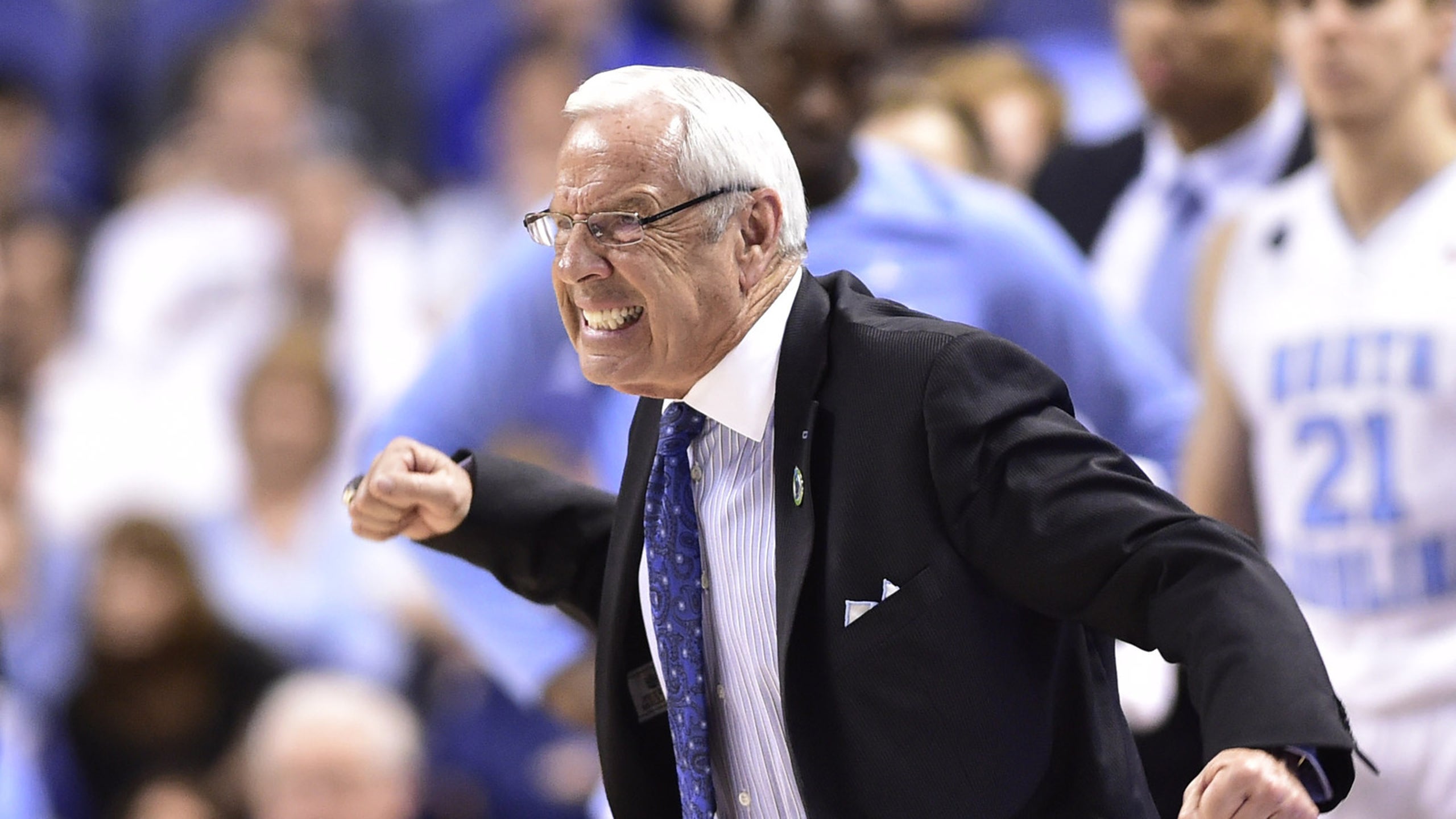 WASHINGTON — The ACC Tournament semifinal between No. 7 North Carolina and defending champion Notre Dame was tight and tense early, with the teams separated by only a single point with about 6 minutes to go before halftime.

Suddenly, Notre Dame simply could not score — or, better, North Carolina wouldn't let it. And the Tar Heels couldn't miss. They just kept pouring it on, scoring outside and inside, from consecutive 3-pointers by Marcus Paige to a steal and end-to-end drive for a layup by Theo Pinson.

With a back-to-himself Paige leading the way, North Carolina scored 24 consecutive points — yes, 24! — over a 9 1/2-minute span bridging halftime and easily beat Notre Dame 78-47 on Friday night for a spot in the title game.

"We could make our travel plans at halftime," Notre Dame coach Mike Brey said. "Let me put it that way."

It was relentless and riveting, and it put UNC (27-6) in its 34th league final and fifth in the past six years. But the Tar Heels have gone 0-4 in that span, including a loss to the Fighting Irish a year ago.

UNC will meet No. 4 Virginia on Saturday night. The Cavaliers beat No. 11 Miami 73-68 in the second semifinal.

Whatever doubts there might have been about the Tar Heels as the NCAAs approach — Could they succeed without much from leading scorer Brice Johnson? Could Paige pull out of his shooting slump? Could the team display enough defensive toughness? — were wiped away during the game-changing run.

"We turned the corner defensively a little bit these past several weeks," Paige said. "We're definitely hitting our stride, but I still don't know what our peak is, which is probably a good thing."

He scored half of his 16 points during the big, rout-making run, and that might have been the best news of all for UNC. He was supposed to be one of the team's stars but has struggled much of the year, and was shooting less than 30 percent over his previous three games.

Four others scored in double-figures for North Carolina, including Johnson and Joel Berry II with 12 apiece.

Bonzie Colson led Notre Dame (21-11) with 15 points, while Zach Auguste had six points and 10 rebounds after getting 19 and 22 in a quarterfinal victory over Duke.

With more size up front, North Carolina was able to seize control under the basket. By halftime, the Tar Heels held edges of 21-12 in total rebounds and 18-4 on points in the paint.

That was something else.

Notre Dame shot 30 percent, finished with a season-low point total and had 17 turnovers.

"They were fabulous. Their defense was a different level than what we've seen or played against," Brey said. "We really had nowhere to go."

After Colson's basket trimmed UNC's lead to 23-22 with 6:12 left in the first half, Notre Dame wouldn't score a point — not a jumper, not a layup, not a putback, not a 3-pointer, not even a foul shot — until there were nearly 3 1/2 minutes gone in the second half. By then, when Colson stepped to the line and made a pair of free throws, North Carolina's lead had reached 47-22.

In all, the Fighting Irish went more than 11 minutes between field goals.

Sure, Notre Dame wiped out a 16-point deficit to beat Duke in overtime Thursday. And the Fighting Irish erased a 15-point hole while coming back to defeat North Carolina last month. This, however, was different.

"Once they saw we weren't going to stop scoring," UNC's Pinson said, "I felt like they (were) just like, `OK, let's just keep playing and not get embarrassed.'"

In addition to 4-for-7 shooting on 3s, Paige had seven assists and zero turnovers.

"I guess you could call it the 'old' me, but I didn't think I ever left," Paige said, "even though I hadn't been playing at the level I had previously been playing at."

Notre Dame: Previous season low for points came in a 68-50 loss to Miami on March 2. ... Entered making 47.6 percent of its shots this season.

North Carolina: This was the largest margin of victory in an ACC Tournament semifinal. ... Its 95th win in league tourney play ties Duke for most in history.