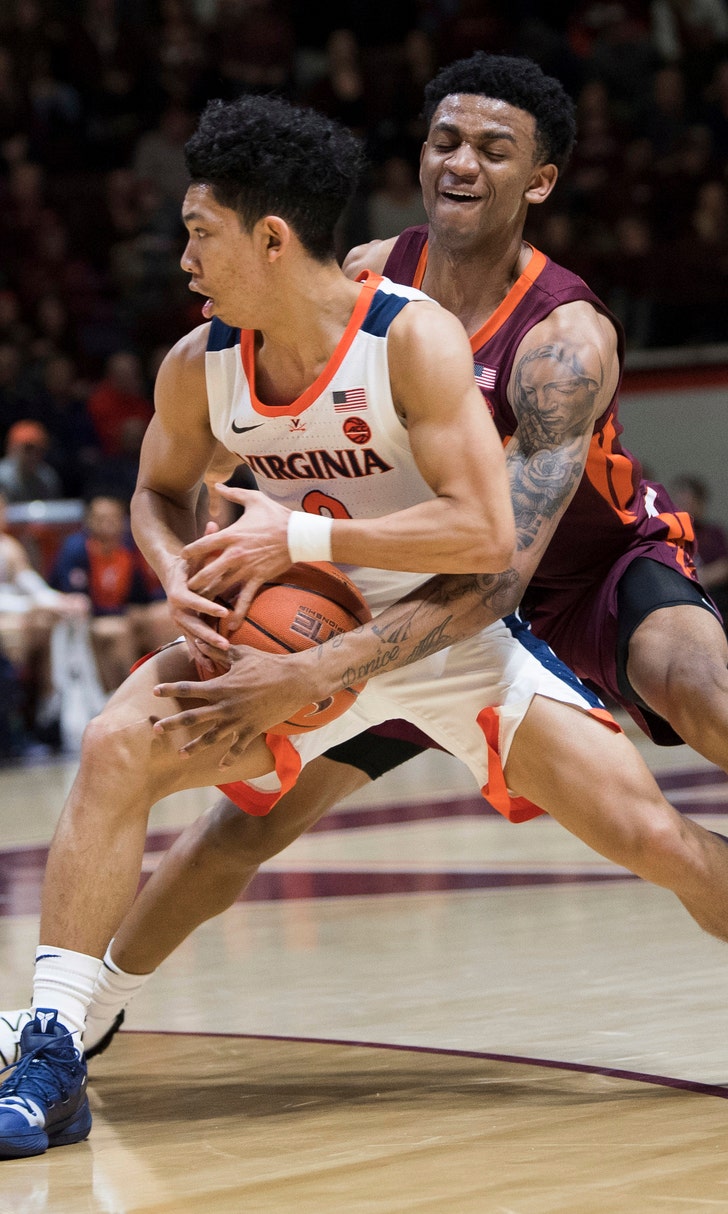 BLACKSBURG, Va. (AP) — Kyle Guy scored 23 points and it was his big first half that gave No. 3 Virginia a chance to get things right in the second half.

Thanks to Guy's 17 first-half points and some uncharacteristically poor shooting by No. 20 Virginia Tech, the Cavaliers overcame a sloppy start and outlasted the Hokies 64-58 on Monday night, sweeping the season series from their state rivals.

"In the first half, they definitely missed a lot of open looks," guard Ty Jerome said. "They're a great shooting team so we got a little lucky in the first half, and then in the second half I think we did a better job of dialing in, beating handoffs better and we made some adjustments."

Had it not been for Guy, who hit four first-half 3-pointers, it would have been a much taller task for the visitors.

"In the first half, they were just missing shots, open shots," Virginia coach Tony Bennett said of the Hokies. "Kyle kept us in it with his 3-point shooting. ... We weren't sharp defensively. We were loose with the ball. ... We were too finesse, and then in the second half it turned in the right direction, but his banging shots — he had what, 17 in the first half? — that kept us in it because we were not doing the job."

The Hokies, though, were unable to take advantage. Despite arriving as the third-best 3-point shooting team in the country at 41.8 percent, they were 2 for 13 from beyond the arc in the half, which ended with them trailing 32-29. They added their third and last 3-pointer of the night 17 seconds into the second half to pull even at 32-all, but finished 3 for 28 from long range, or just 10.7 percent.

"Tonight just wasn't our night as a team shooting," said Ahmed Hill, who was 1 for 9 from behind the arc.

And Virginia, one of the nation's best at defending against 3-pointers, got back to playing its way.

"Offensively, they took their time, they got what they wanted and kind of wore us down," Hill said.

Jerome added 16 points and De'Andre Hunter had 10 for the Cavaliers (23-2, 11-2 Atlantic Coast Conference), who won for the sixth time in their last eight visits to Cassell Coliseum.

Kerry Blackshear Jr. had 23 points and 13 rebounds for the Hokies (20-6, 9-5), who played their sixth game in a row without floor leader Justin Robinson (injured foot). Hill added 16 points and Nickeil Alexander-Walker had 11, but those two were a combined 10 for 31 from the field.

The game was tied at 32 after Hill's 3-pointer to open the scoring in the second half, but the Cavaliers gradually built their lead to 48-38 with about 11 minutes to play. The Hokies scored the next five points, rousing a sold-out crowd, but Virginia turned up its defense and held the Hokies scoreless for six possessions over the next 4 ½ minutes and opened its largest lead at 56-43 with 5:51 to play.

Hill broke the drought for Virginia Tech with a steal and dunk, and Alexander-Walker followed a Virginia miss with a basket in traffic, but Jerome answered with a driving bank shot for the Cavaliers and their lead was 58-47 with 4 minutes to play. Three-pointers by Guy, his sixth of the game, and Braxton Key rebuilt the Virginia lead to 64-54 with under a minute left.

The way Virginia's first half ended was indicative of the entire 20 minutes.

Kihei Clark rebounded a Hokies miss with 5 seconds left, but immediately turned the ball over, Isaiah Wilkins laying it in for the Hokies.

The Cavaliers led 32-29 at the break and Jerome said he was feeling fortunate that his team was ahead, but Bennett fixed that.

"What he said to us at halftime, it was kind of hard to remember we were up," Jerome said. "He really gave it to us."

Virginia: The Cavaliers appeared extremely loose in pregame warmups, but again were hurt by turnovers (eight) and sloppy play in the first half. They also played the last 12-plus minutes of the half without Hunter because of foul trouble and appeared out of sorts at times without their scorer most capable of making his own shot. They finished with 13 turnovers.

Virginia Tech: The Hokies have struggled mightily at times without Robinson, but Blackshear has emerged as more of a go-to offensive performer in his absence. In his last two games, he's 18 for 23 from the field with 52 points. That can only help if and when Robinson returns from his left foot injury. The Hokies finished with just nine assists on 23 field goals.

Virginia: The Cavaliers play at No. 18 Louisville on Saturday.

Virginia Tech: The Hokies go on the road to play at Notre Dame on Saturday.