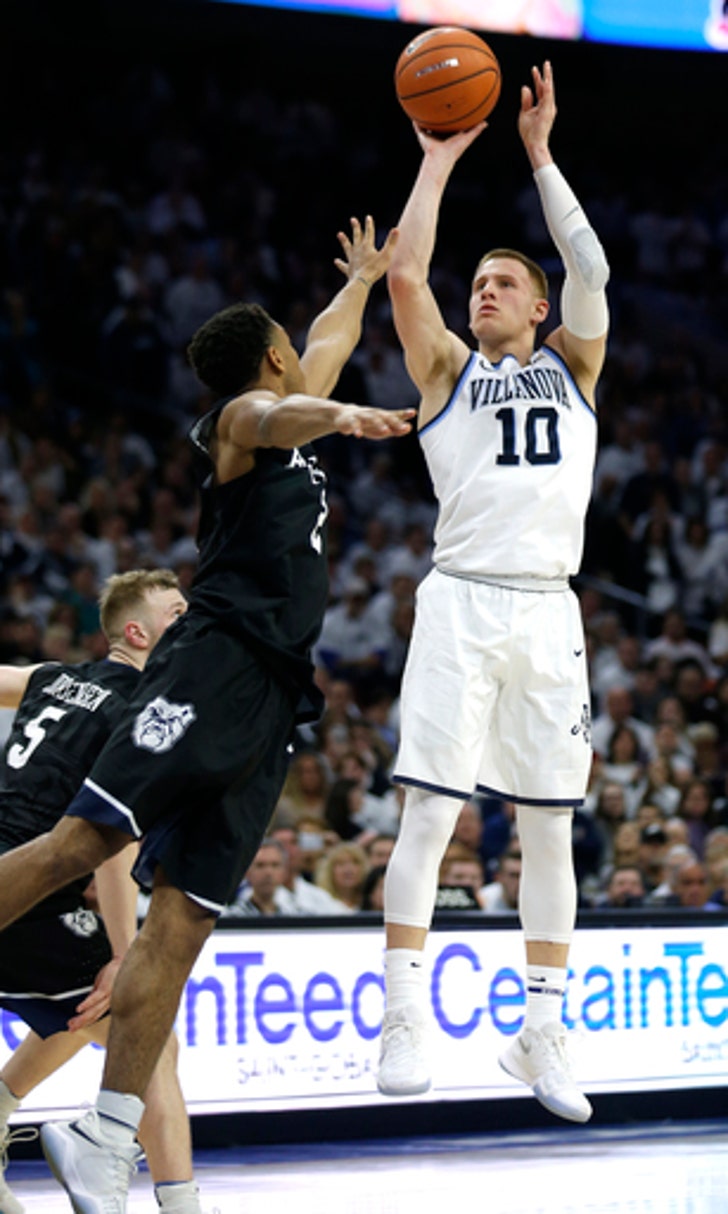 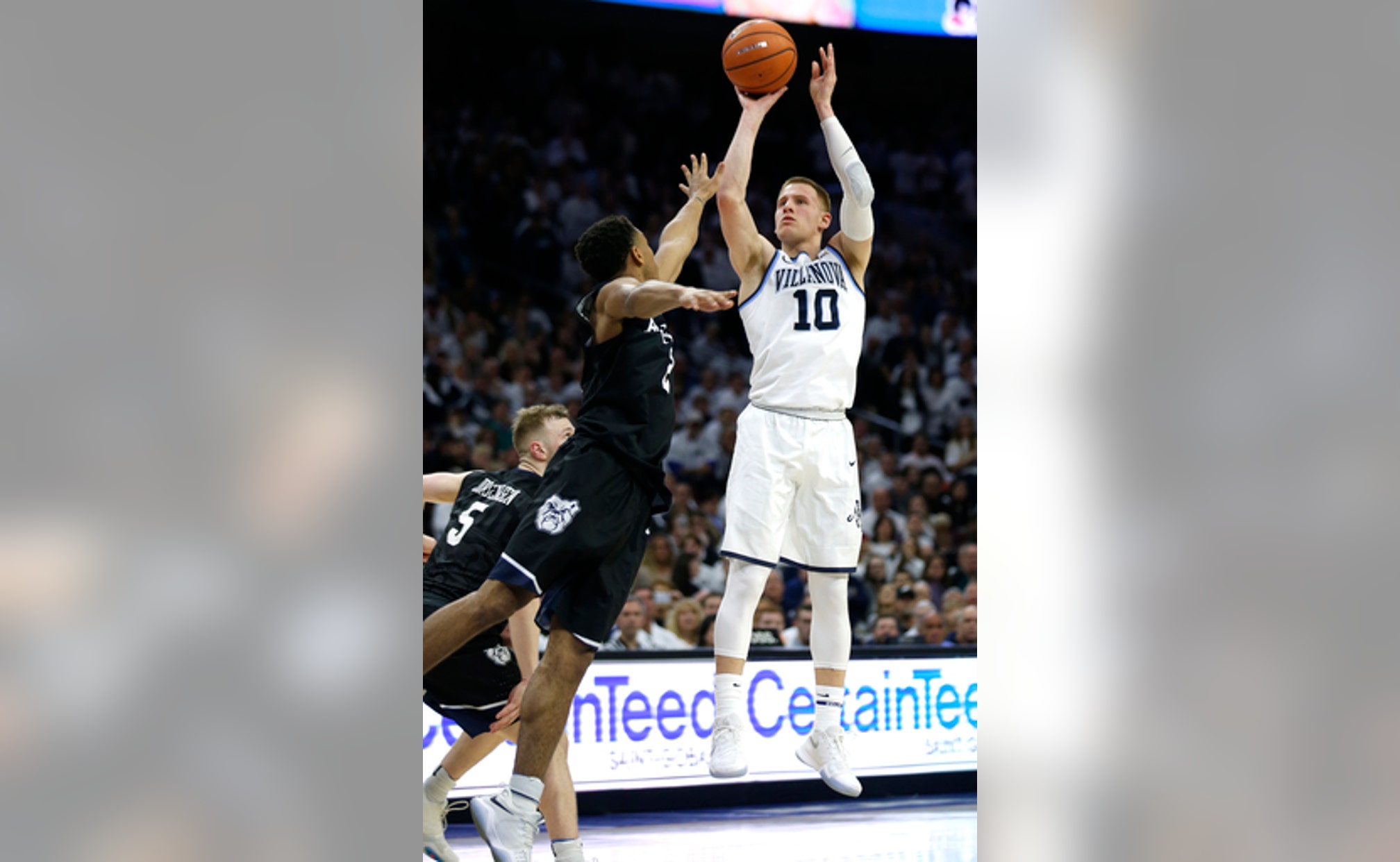 PHILADELPHIA (AP) Donte DiVincenzo scored a career-high 30 points, Jalen Brunson had 27 and No. 1 Villanova bounced back from its second loss of the season, rallying past Butler 86-75 Saturday.

Omari Spellman added 10 points and 11 rebounds for the Wildcats (23-2, 10-2 Big East), who avoided losing consecutive games for the first time since March 2013. The injury-depleted Wildcats were coming off a surprising home loss to last-place St. John's three days earlier.

Kelan Martin scored 30 and Kamara Baldwin had 25 for Butler (17-9, 7-6), which handed Villanova its first loss of the season on Dec. 30. The Bulldogs had won three straight vs. Villanova, and looked they might continue the streak when they led by as many as 13 in the first half behind Martin's hot hand.

CHARLOTTESVILLE, Va. (AP) - Kerry Blackshear Jr. scored on a putback with 5.8 seconds left and Virginia Tech spoiled Virginia's opportunity to climb to No. 1.

Blackshear rebounded a missed layup by Justin Robinson and banked it in as he was being fouled. He missed the free throw, but Ty Jerome's 28-foot attempt at the other end missed badly and the Hokies (18-7, 7-5 Atlantic Coast Conference) had a marquee victory.

Robinson led the Hokies with 20 points and seven assists.

The Spartans (24-3, 12-2 Big Ten) have won eight straight, improving their chances of contending for a conference championship and earning a No. 1 seed for the NCAA Tournament.

Goodin got fouled by Ronnie Harrell Jr. after Harrell had made three straight free throws to give the Bluejays a one-point lead with 4.6 seconds left. Goodin took an inbound pass from Naji Marshall and drove the length of the court to the basket, with Harrell making contact in the lane and sending him to the line.

Toby Harrell's baseball pass sailed out of bounds on the other end, and the Big East-leading Musketeers (23-2, 11-2) to win.

Texas Tech (21-4, 9-3) relied on strong second-half defense. After a 27-27 deadlock in the first half, the Red Raiders turned up the pressure.

Dean Wade led the Wildcats with 13 points on 4-of-12 shooting.

Auburn leaned heavily on Harper early in the game. He scored 12 consecutive points for the Tigers, including back-to-back 3s for a 17-9 lead. Auburn (22-3, 10-2 Southeastern Conference) never relinquished the advantage.

Brown, the fifth-leading scorer in the SEC with an average of 16.6 points per game, was held out with a right shoulder injury suffered in the first half of the Tigers' loss to Texas A&M on Wednesday night.

WACO, Texas (AP) - Manu Lecomte scored eight straight points for Baylor after Big 12 co-leader Kansas had pulled within a basket, and the senior guard finished with 18 overall in the Bears' upset victory.

The Jayhawks (19-6, 8-4 Big 12) trailed 30-20 at halftime after having more turnovers (nine) than made field goals (seven) before the break. They were down by as many as 13 points after that but got within 58-56 with 7:14 left after consecutive jumpers by Lagerald Vick.

Devonte Graham had 14 of his 23 points after halftime for Kansas, while Malik Newman finished with 20.

The Bulldogs (23-4, 13-1 West Coast Conference) jumped on the Gaels (24-3, 13-1) early and never trailed to avenge a home loss to Saint Mary's last month and move back into a tie for first in the conference race with four games remaining.

Arizona, beaten Thursday night by UCLA in the Wildcats' first home loss of the season, defeated USC in Tucson for the eighth straight time. Coupled with UCLA's loss at Arizona State earlier Saturday, Arizona extended its Pac-12 lead to two games over the second-place Trojans and Bruins with five more to play.

Bates-Diop made two early 3-pointers but Iowa made the lanky small forward largely ineffective in the first half. It wasn't until the latter part of the half and the first four minutes of the second that the Buckeyes eventually pulled away.

TUSCALOOSA, Ala. (AP) - Donta Hall had 17 points and 11 rebounds and Collin Sexton scored 16 points to lead Alabama to a victory over Tennessee.

The Crimson Tide (16-10, 7-5 Southeastern Conference) thoroughly dominated the Volunteers (18-6, 8-4) around the basket and cashed in on a number of fast-break chances

Hall made 8 of 10 field goals and blocked three shots. Tennessee had no answer to Sexton's quick darts to the basket, and the freshman also had four assists.

Tennessee had only one scorer in double digits. Grant Williams scored 12 of his 16 points in the second half.

Iowa State built and then blew a 17-point lead, but Donovan Jackson's 3 with 1:55 left put it ahead 80-77. Wigginton then beat the shot clock with a long 3, and Jackson hit a pair of free throws to clinch the win.

Maye also had 17 rebounds and spent most of the second half as a one-man show for the Tar Heels (19-7, 8-5 Atlantic Coast Conference).

The Shockers (19-5, 9-3 American Athletic Conference) had 17 assists and just two turnovers while building a 55-33 halftime lead and were never threatened after that.

Conner Frankamp scored 14 points for Wichita State, Shaquille Morris had 12 and Darral Willis added 10 as the Shockers shot 52.4 percent from the floor.

Kendall Stephens added 21 points for Nevada (21-5, 10-2 Mountain West). The Wolf Pack rebounded after falling to UNLV on Wednesday night for their first home game of the season.

John Calipari has lost three consecutive games for the first time since taking over the Kentucky program before the 2009-2010 season.

BOSTON (AP) - Ky Bowman stole a rebound under the basket, drew a foul and hit two free throws with 2.9 seconds left as Boston College scored the last nine points of the game to rally for a victory over Miami.

The Hurricanes led 70-63 with 6:17 left- their biggest lead of the game - before missing their last nine shots and turning the ball over five times. Jerome Robinson had six of his 29 points down the stretch, and Bowman had the other three.

The victory snapped a 12-game losing streak against Miami for BC (15-10, 5-7 Atlantic Coast Conference).