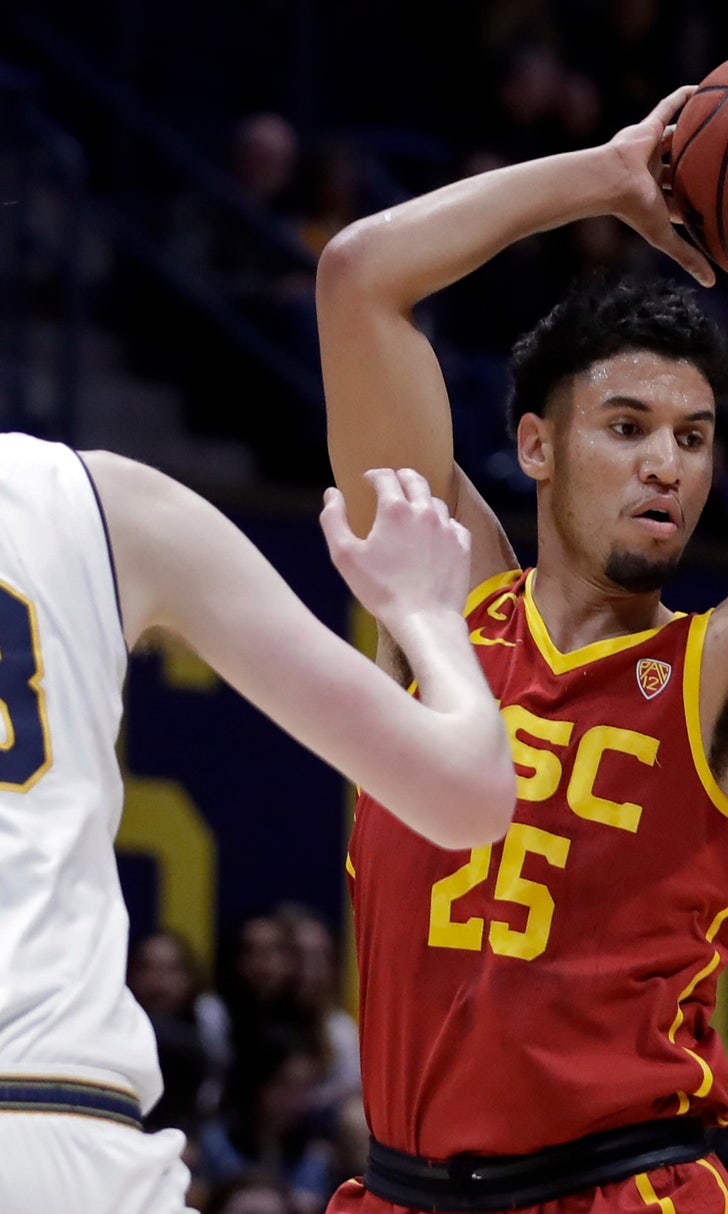 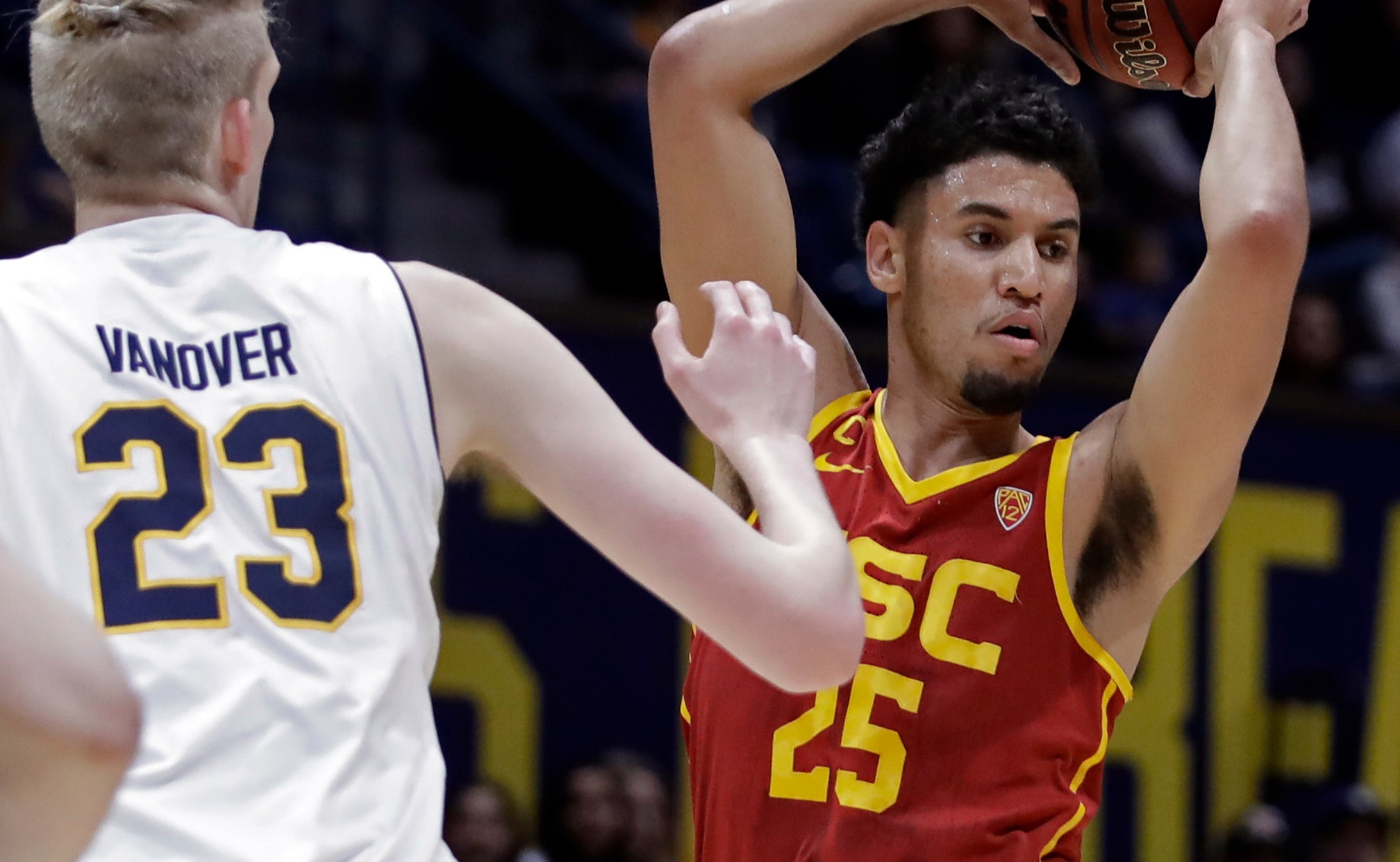 previous story
Jackson leads No. 1 Baylor women in 87-53 win over Oklahoma
next story
Game changer: Tebow enters Mets camp ‘all in’ on baseball

BERKELEY, Calif. (AP) — Bennie Boatwright couldn't understand why USC coach Andy Enfield was yelling for him to shoot a 3-pointer, even though Boatwright had a defender in his face.

The next time down the court Boatwright didn't wait for his coach to say anything and launched himself into the Trojans record books and a spot in Pac-12 history as well.

Boatwright scored 36 points and set a USC school record with 10 3-pointers in an 89-66 win over California on Saturday night.

In doing so, Boatwright became the fourth player in Pac-12 history to make 10 3s in one game.

Boatwright was stellar all night and shot 12 of 19 while finishing one point shy of his career high set earlier this season. He went 10 of 13 beyond the arc to break the previous USC record of nine shared by Anthony Pendleton (1987) and Katin Reinhardt (2015).

"He deserved it," Enfield said. "He played a great game. He took open shots and then made some tough shots down the stretch. He played very well."

Enfield pulled Boatwright with 12:07 left in the second half with the senior having made nine 3s. But Boatwright checked back in with 8:07 remaining and missed one 3 before nailing the record-setting shot four minutes later to put USC ahead 87-56.

It came after Boatwright passed up a chance while Enfield yelled for him to shoot.

"I caught it and I didn't shoot it, and Enfield was like, 'Shoot it,'" Boatwright said. "I was like, 'You're telling me to shoot it? OK, you don't gotta tell me twice.' The next time I touched it, I got it up."

Boatwright went back to the bench moments later and exchanged high-fives with coaches and teammates.

Justice Sueing scored 17 points and Matt Bradley added 14 for California (5-20, 0-13). The Golden Bears have lost 14 straight and are headed for back-to-back 20-loss seasons for the first time in school history. Both have come under coach Wyking Jones.

"We took a major step back today," Jones said. "I don't know if it's fatigue. I don't know what it is, but we were just a step slow on every rotation. Our communication wasn't there. We've got to get back on track, because we're just in a funk right now."

Only three other players in Pac-12 history have made 10 3s in a game. Arizona State's Stevin Austin did it twice in 1993 and '94, while Oregon's Tajuan Porter (2006) and Washington State's Robert Franks (2018) also reached the milestone.

Coming off a 79-76 loss at Stanford when they were outscored 7-0 in the final 44.2 seconds, the Trojans never trailed and led by 31 to complete the season sweep of Cal. USC's win was its second in eight conference road games this season. USC has won two of its last three conference games away from home, an encouraging sign for Enfield's team which closes out the Pac-12 schedule with three consecutive on the road.

USC: Boatwright was phenomenal and made his big night look relatively easy against a Cal defense that repeatedly left him open for uncontested shots. Porter followed Boatwright's lead while helping anchor the Trojans' perimeter attack. It was also a big win for USC, which entered the day in a four-way tie for sixth place in the Pac-12.

California: The Bears were coming off a gritty effort in a loss to UCLA three days earlier but showed none of that in another lopsided loss. Sueing has been fairly consistent most of the season and had another solid night, but Cal's offense mostly sputtered. The Bears five wins so far are their fewest since 1913-14 when Cal was an independent and played only two games, winning both.

USC: Hosts Oregon on Thursday. The Trojans had won three straight against the Ducks before losing in Eugene, 81-60, on Jan. 13.

California: Plays at Arizona on Thursday.

North Carolina Fans Get Their Prize
The wait is over, UNC faithful. Your billboard has landed smack dab in Durham, North Carolina, for all Duke fans to see.
10 hours ago