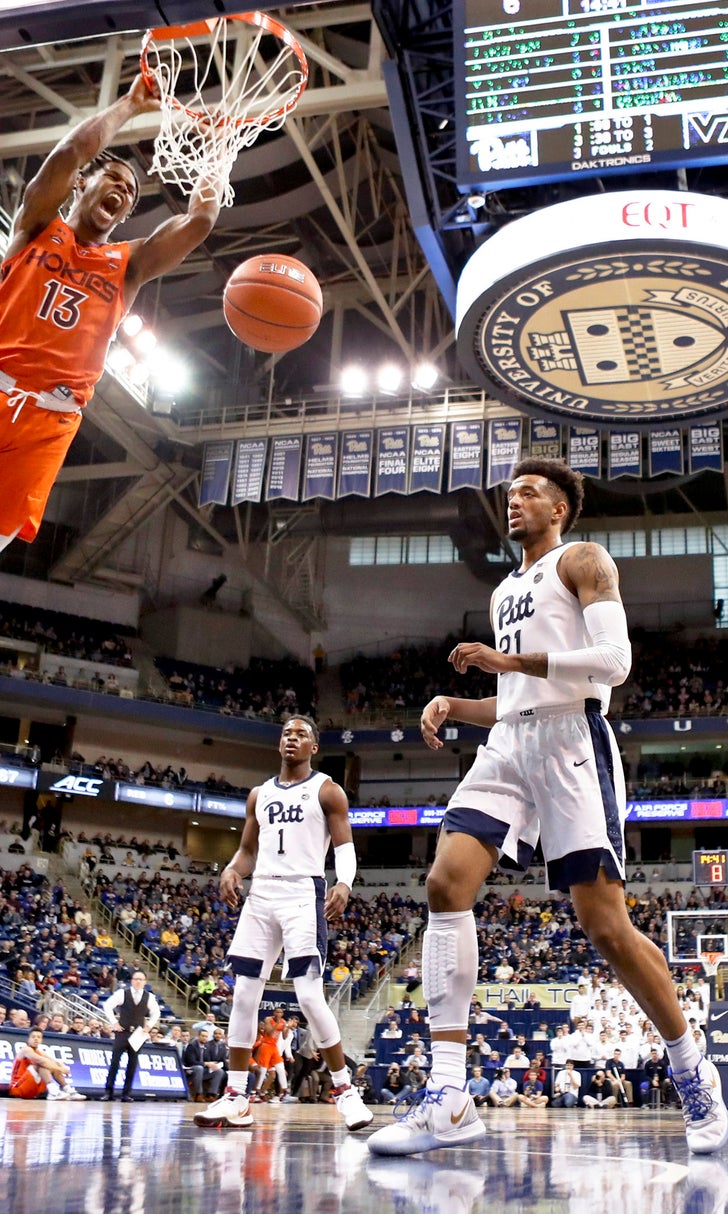 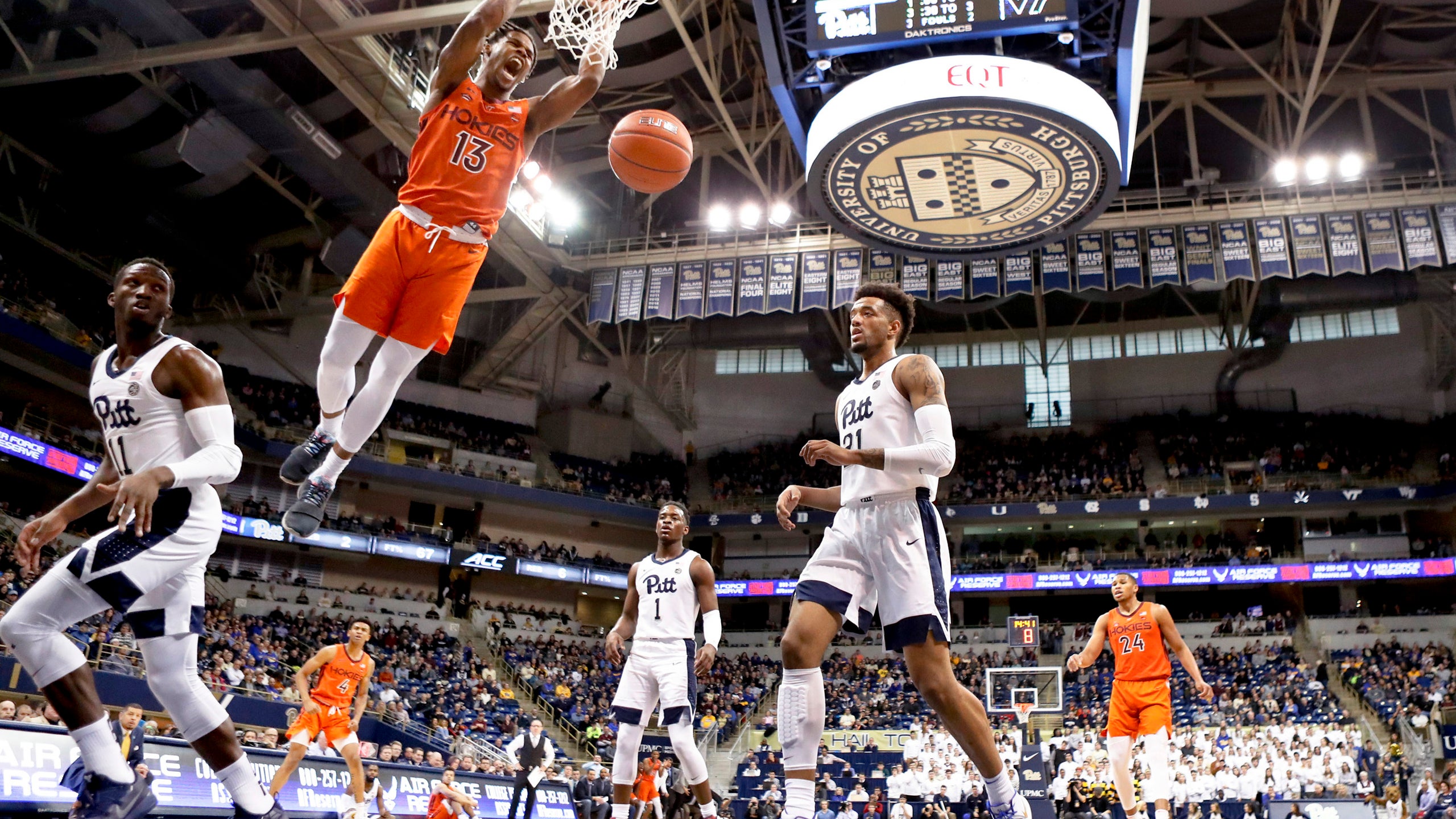 PITTSBURGH (AP) — Kerry Blackshear Jr. was mid-answer when the sight of a couple of Virginia Tech teammates recording his postgame interview with phone in hand became a bit too intrusive.

"I'm panicking, boy," Blackshear said. "You've got to get that off me."

It was the first time all day the junior forward looked rattled. Blackshear poured in a season-high 29 points during a near flawless performance to lead the 22nd-ranked Hokies to a 70-64 victory over slumping Pittsburgh on Saturday.

The 6-foot-10, 250-pound Blackshear overwhelmed the undersized Panthers. He made 8 of 9 shots from the field, including all three of his 3-point attempts, and went 10 of 11 from the free throw line in addition to grabbing nine rebounds as Virginia Tech (20-5, 9-4 Atlantic Coast Conference) reached the 20-win mark for the fourth consecutive season.

The last three wins have come despite missing senior point guard Justin Robinson, who remains out indefinitely with a toe injury. After an initial wobble — the Hokies lost two of their first three without Robinson — they have found their footing behind Blackshear.

The Hokies relied on it when necessary against the Panthers. Blackshear scored a career-high 31 on 12-of-16 shooting last year against Pitt and was even more efficient this time around. Jumpers. Putbacks. Layups. Dunks. He was dominant from nearly start to finish no matter who the undersized Panthers put on him.

Though Pitt (12-14, 2-11) kept scrapping — at one point 6-3, 185-pound freshman Trey McGowens threw Blackshear to the floor as the two battled for a loose ball — the Panthers dropped their ninth straight.

Xavier Johnson led Pitt with 18 points. Sidy N'Dir chipped in 12 points and six rebounds but every time the Panthers appeared ready to make a push, the Hokies responded. When Johnson's 3-pointer drew the Panthers within 48-46 with 7:28 to go in the second half, Virginia Tech knocked down three straight 3s of its own —including one by Blackshear to extend the advantage to 59-47.

"It's an example of a veteran team, a team that's been together and had some experience, that's used to winning, to step up and make plays when we had momentum," first-year Pitt coach Jeff Capel said.

Pitt eventually cut it to 63-56 on a pair of free throws by Johnson with 1:58 remaining and created a turnover in the backcourt when N'Dir stepped in front of a pass. Panther guard Kham Davis drove to the basket for a layup but the bucket was waved off when officials called Davis for a charge.

Blackshear immediately converted two free throws at the other end to make it 65-56 and Virginia Tech did just enough down the stretch to win its fourth consecutive meeting with Pitt.

The Hokies' poise down the stretch allows them to briefly exhale before a visit by fourth-ranked Virginia on Monday. The Cavaliers rolled in an 81-59 victory on Jan. 15. The Hokies know they need to be better in all phases this time around.

A year after going winless in the ACC, Pitt's initially promising 2-2 start in the conference under Capel has faded though he remains impressed by his team's effort.

"I understand how hard this is going to be and it's not a quick fix," Capel said. "We won a couple of games early and it changed some expectations for all of us. I think I've had a pretty good perspective on this. It's hard. It's really hard. It's frustrating. We want to be better, but we're getting better."

Virginia Tech: The Hokies seem to have overcome the offensive issues that plagued them as they tried to deal with the absence of their second-leading scorer in Robinson. Virginia Tech shot 51 percent (21 of 41) from the floor and 10 of 21 from 3-point range after shooting 48 percent in a win over Georgia Tech on Wednesday.

Pitt: The problem for the Panthers is in some ways a matter of mere physics. The Panthers lack the size to create any sort of offensive threat inside, allowing teams to play zone and force them to chuck it from deep. Defensively there's little they can do against a legitimate post presence like Blackshear.

Virginia Tech: The Hokies fell behind by 22 in the first half in the initial meeting with the Cavaliers and never recovered.