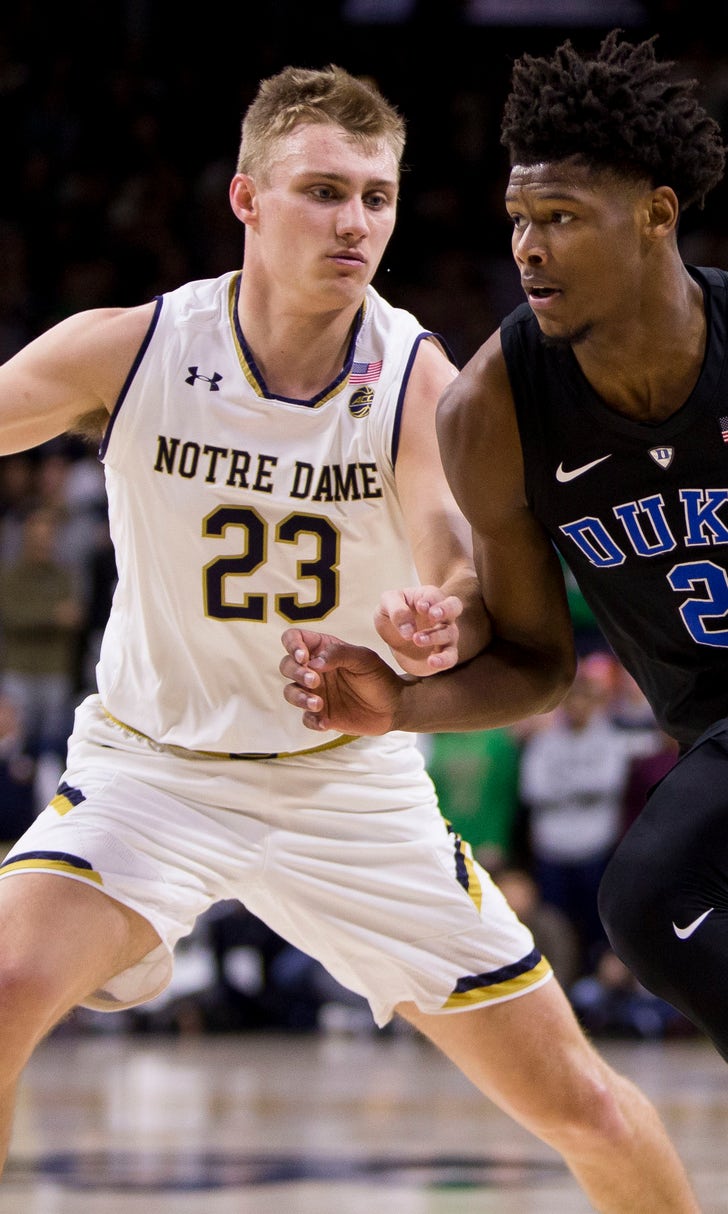 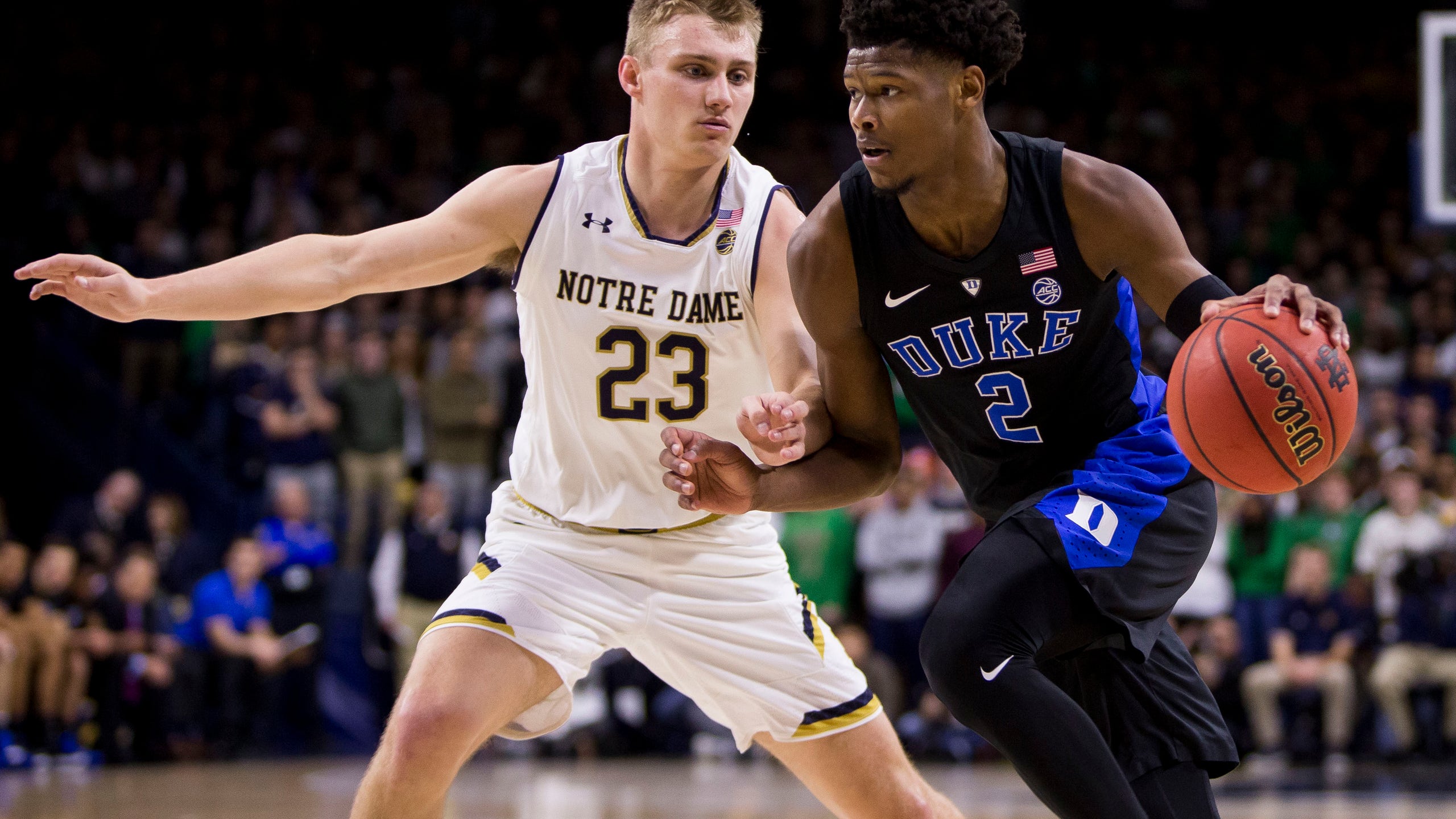 previous story
No. 11 Kansas in a slump as it hosts No. 16 Texas Tech
next story
Samkova, Dierdorff capture snowboardcross titles at worlds

DURHAM, N.C. (AP) — Few teams score quite like Duke but the 3-point line could be the Achilles' heel for the explosive Blue Devils

It's a clear weakness for the star-studded squad. No. 2 Duke is shooting just 31.1 percent from behind the arc and is on pace to become the worst team in school history from 3-point range — even after a 10-for-19 performance at Notre Dame earlier this week.

And yet the Blue Devils are shooting them more often than usual — their average of 24.3 per game is their highest in nearly two decades.

It's a surprising trend for a team that boasts the nation's No. 4 scoring offense at 87.2 points per game while ranking fourth in Ken Pomeroy's offensive efficiency rankings.

"It's definitely something we can fix," point guard Tre Jones said Friday. "We've talked about it a lot now, and trying to work on it much moreso."

Freshman phenoms Zion Williamson and RJ Barrett can score with ease at the rim — but it's been way more difficult for them, and everybody else, to do it from 20 feet, 9 inches away.

"We're not short of any shooters," co-captain Jack White said. "We have more than enough guys that can knock down an outside shot."

The Blue Devils (18-2, 7-1 Atlantic Coast Conference) enter Saturday's game against St. John's ranked 311th in Division I in 3-point shooting percentage, their worst ranking in any of the NCAA's team stat categories. It's by far the worst among teams in the AP Top 25 — the next-worse is No. 25 Florida State at 220th — and better than only four other Power Five schools.

One possible reason, Jones said, is that the Blue Devils spend so much energy on defense that fatigue sets in at the other end.

"As hard as we've been playing on defense, it can throw us off when it comes to our shots at the offensive end," Jones said.

Statistically, it seems tough for Duke to avoid setting a school record for worst 3-point-shooting percentage, a mark currently held by the 2008-09 team that shot 34.9 percent.

They could catch them by making 29 consecutive 3-pointers. Or, if they keep shooting 24 of them during their remaining 11 regular-season games, they'd need to shoot 42 percent the rest of the way to bring their percentage up to that level before tournament play.

Cameron Reddish's 33 percent shooting from long range stands as the best among the team's regulars, and he hit the team's biggest 3 of the season — one with 0.8 of a second left that beat Florida State on Jan. 12.

But he's also had a handful of clunkers — incredibly, all at home. He was 1 for 9 against Hartford, 1 for 8 against Georgia Tech, 1 for 6 against Virginia and 0 for 5 against Yale.

Barrett (32 percent) also has had a few forgettable performances from beyond the arc. He went 0 for 7 against Texas Tech, 1 for 6 against Virginia and in the Syracuse loss he was 4 for 17 — the most 3s taken by a Duke player since Bobby Hurley in 1993.

White became the just the third player in Division I this season to go 0-for-10 from 3-point range in a game when he did it against the Orange's 2-3 zone. And no player in the nation has missed more 3s without making one this season than Jordan Goldwire — who's 0 for 15.

That Syracuse game was telling because it may have shown the blueprint for beating them: Pack the paint around Williamson, clog the driving lanes and dare the Blue Devils to repeatedly hoist 3s.

With Jones injuring his shoulder early in that game, the offense devolved into a seemingly never-ending stream of 3s that clanked off the rim. Duke put up a school-record 43 3s in that game but made only nine.

Georgia Tech tried something similar with its unique zone and led the Blue Devils by eight points in the second half before Duke pulled away for a 66-53 win despite finishing just 2 of 21 from 3-point range.

"A big emphasis at the start of the year was the stand-still 3s," White said. "Just guys being ready off the ball. ... I just wasn't ready for my shot. ... I think an emphasis has been brought back on that, which will obviously help get our 3-point shooting back up. We're going to have bad shooting games. We've just got to stick with it."