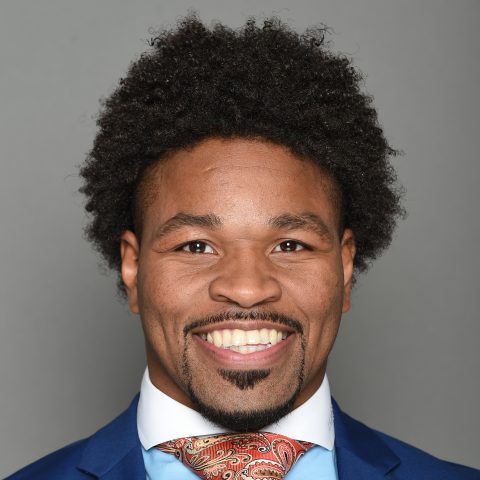 A true warrior of the sport who always fights the toughest competition and biggest challenges, Porter became a two-time world champion in September 2018 when he won a hard-fought decision over fellow welterweight star Danny Garcia to capture the WBC Welterweight World Championship and then defended the belt live on FOX in March against Yordenis Ugas. He then lost to Errol Spence Jr. in a welterweight unification bout that was voted Fight Of The Year in 2019 by several boxing media members. He currently holds a professional record of 30 wins, three losses and one draw, with 17 KOs. He lives and trains in Las Vegas.

Known for his rugged style and elite athleticism inside the ring, Porter was an All-Conference running back in high school in Akron, Ohio. In addition to his prowess on the gridiron, Porter began to make a name for himself as an amateur boxer, with world championship potential he would one day realize.

Fighting mostly as a middleweight, Porter put together an amateur record of 276-14, including victories over the likes of Daniel Jacobs, Oleksandr Usyk and Demetrius Andrade. He turned pro in October 2008 and by 2010 he debuted as a welterweight by defeating fellow prospect Ray Robinson by unanimous decision.

Despite fighting to a spit draw against Julio Diaz in 2012, Porter was able to work his way to a world title shot with a victory over then unbeaten Phil Lo Greco and a decision over Diaz in their 2013 rematch. Standing in Porter’s way was IBF Welterweight Champion Devon Alexander, who would defend his title against Porter in December 2013.

Porter proved he was meant for the bright lights as he showed off his speed and power to earn a clear decision win over Alexander to become world champion. After a fourth-round stoppage of Paulie Malignaggi in his first title defense, Porter would lose a majority decision to Kell Brook August 2014 in a rough fight that saw both men suffer cuts from accidental headbutts.

Determined to reclaim his championship status, Porter continued to look for tough challenges, including a June 2015 showdown against four-division champion Adrien Broner that saw Porter emerge with a wide decision victory despite suffering a knockdown. Next, Porter engage in one of 2016’s most memorable fights against WBA Welterweight Champion Keith Thurman.

Porter was just one point from each judge from walking out with a draw against Thurman, but still left with even more respect and adoration from the fans in attendance at Barclays Center and watching on CBS. Still, Porter did not take an easy path back from this defeat, he first stopped former champion Andre Berto in April 2017 and followed it up with a win over rugged brawler Adrian Granados to secure his WBC title fight against Garcia.