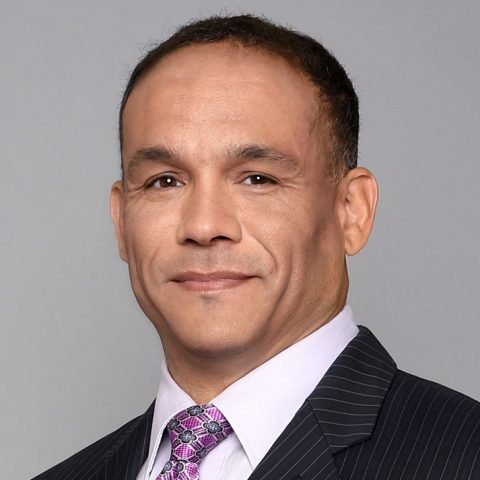 Robert Smith is an analyst for FOX Sports’ coverage of college football, primarily calling games from the broadcast booth.

A native of Euclid, Ohio, Robert Smith starred as a running back at The Ohio State University and was named the Big Ten Freshman of the Year in 1990 when he rushed for 1,126 yards. He played two seasons with the Buckeyes football program, in 1990 and 1992, leading the team in rushing both years and averaging 88.4 yards per game with 18 total rushing touchdowns. Smith also ran track at Ohio State and earned first-team All-Conference recognition in 1992 and 1993.

Smith was selected by the Minnesota Vikings in the first round of the 1993 NFL Draft and played his entire eight-year pro career with the franchise. He was a two-time Pro Bowl selection and led the NFC in rushing in 2000 with a career-high 1,521 yards, but announced his retirement following that season to preserve his health.

In 2004, Smith released his first book, “The Rest of the Iceberg: An Insider’s View on the World of Sport and Celebrity,” in which he writes openly about his time with the Buckeyes and Vikings and his relationships with other players and coaches. He began his broadcasting career in 2005 with ESPN, contributing regularly to “College Football Live” and the network’s Saturday studio coverage. An amateur astronomer, he was featured in the 2007 PBS program “Seeing in the Dark.”