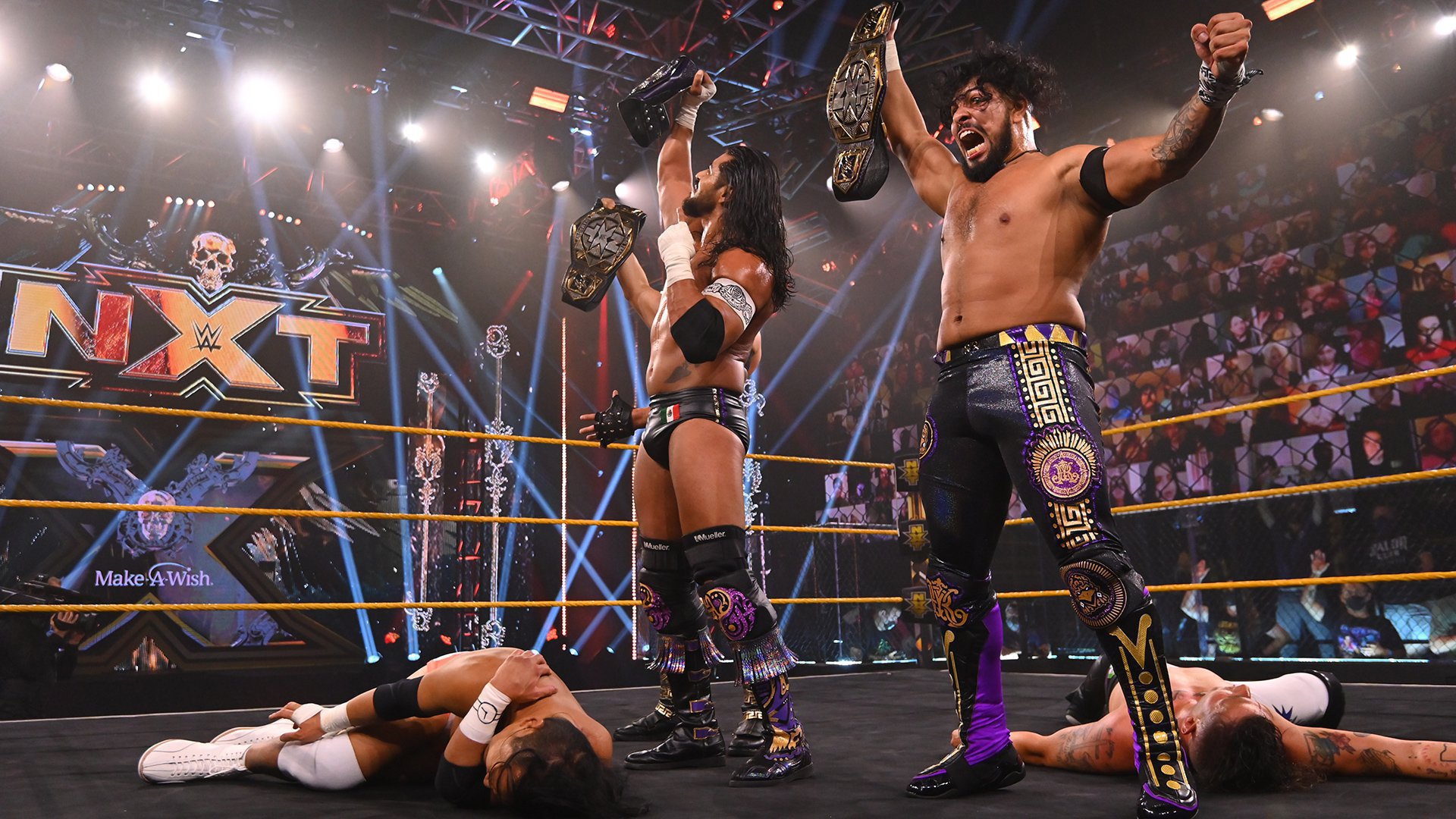 With NXT Women's Champion Raquel Gonzalez looking on, Mercedes Martinez and Dakota Kai battled in a seesaw affair. Martinez and Gonzalez eventually found themselves face to face on the outside, with Martinez dropping the champion with a straight right. Gonzalez retaliated back in the ring with a massive boot, forcing the disqualification. But Martinez was anything but a winner, as "Big Mami Cool" left her lying after a savage assault.

Zack Gibson & James Drake came to the Capitol Wrestling Center to stake their claim to an NXT Tag Team Championship opportunity against MSK, but what they got instead was a beatdown from the hard-nosed team of Tommaso Ciampa & Timothy Thatcher, who are also eyeing the titles.

Zayda Ramier def. Toni Storm thanks to an assist from Zoey Stark

Clearly still not over her upset loss against Zoey Stark back at NXT TakeOver: Stand & Deliver, Toni Storm sought to make an example of the upstart Zayda Ramier. Storm did just that until Stark arrived after Storm badmouthed her earlier, and Stark's presence at ringside caused a lapse in Storm's focus. Ramier wisely capitalized, hitting a spectacular Shooting Star Press to deal Storm another disappointing defeat.

With help from the rest of The Way, Austin Theory looked to be cruising to victory after Bronson Reed ate a superkick from NXT North American Champion Johnny Gargano outside the ring. The match devolved into chaos when Dexter Lumis arrived at ringside with his eyes locked on Indi Hartwell, who spurned him after Lumis supposedly sent flowers to Way rivals Shotzi Blackheart & Ember Moon.

Theory collided with Lumis, sending him crashing to the outside, and moments later Reed flattened "All Day" with the Tsunami, earning another crack at Johnny Gargano.

Marcel Barthel & Fabian Aichner did an excellent job isolating Drake Maverick, but eventually Killian Dain was fed up enough to bulldoze his way into the ring despite not being the legal man. Imperium later seemed stuck in a disagreement on the outside when Barthel ordered Alexander Wolfe to attack Dain — Wolfe's former SAnitY stablemate — with a chair. While Wolfe couldn't pull the trigger, he did stop an attack by Dain, and Barthel sent The Beast of Belfast crashing into the steps.

Meanwhile, back in the ring, Barthel & Aichner planted Maverick with the European Bomb for the victory.

Shotzi Blackheart & Ember Moon were not even able to compete in their scheduled match against The Robert Stone Brand, as Candice LeRae & Indi Hartwell viciously ambushed them. The Way left the NXT Women's Tag Team Champions in tatters at ringside, setting the stage for next week's Street Fight for the titles.

NXT Cruiserweight Champion Kushida and his NXT Tag Team Champion partners showcased impressive synergy until the bout took a brutal twist thanks to Santos Escobar, who powerbombed NXT's resident Time Splitter through the announce table. Back in the ring, Joaquin Wilde & Raul Mendoza brought the onslaught to MSK as well, though Wes Lee & Nash Carter refused to stay down.

Kushida seemingly made a mistake refusing medical attention at ringside, as Escobar capitalized by planting him with the Phantom Driver, while Wilde & Mendoza took out Carter with a potent double-team attack to earn the pinfall.

Adam Cole sits down with Arash Markazi tonight on NXT

The last we saw of the former Undisputed ERA front man, he was being loaded into an ambulance after an unsanctioned war with Kyle O’Reilly. O’Reilly was back on the black-and-gold brand last week and caught the ire of NXT Champion Karrion Kross.

With the rubble cleared, what will Cole have to say in his first NXT appearance since the punishing encounter?

Catch the can’t-miss interview this Tuesday at 8/7 C on USA Network!

Santos Escobar and Legado del Fantasma appear to be far from done with Kushida, but he also has some backup on his side.

Kushida stunned Escobar two weeks ago by pinning him to become the new NXT Cruiserweight Champion and retained in his first defense last week against Oney Lorcan before being ambushed by Escobar and company.

MSK’s Nash Carter and Wes Lee, who have had their own problems with Wilde and Mendoza, hit the scene to help NXT’s resident Time Splitter clean house.

Which trio will prevail in this pivotal tussle with potential championship implications? Find out Tuesday night at 8/7 C on USA Network!

Mercedes Martinez to square off with Dakota Kai

Raquel Gonzalez is the NXT Women’s Champion, but is she still taking orders from Dakota Kai?

Martinez’s recent psychological warfare with “Big Mami Cool” and her ally will escalate to the ring this Tuesday night on NXT when she squares off with Kai.

Making no secret about her desire to take the title from Gonzalez, Martinez has also stirred the pot, declaring that even despite reaching the top of NXT, the hulking Gonzalez was still little more than Kai’s “lap dog.”

Now, Martinez plans to take out Kai, then the champion. Can Kai stop her?

Tune in to NXT this Tuesday night at 8/7 C on USA Network!

Can Reed earn another chance at Gargano?

In order to get another chance at Johnny Gargano’s NXT North American Title, Bronson Reed will have to go through Austin Theory.

The Colossal Superstar will collide with “All Day” this Tuesday night on NXT and will need a win to earn a rematch with Gargano.

Reed came up just short against Johnny Wrestling on Night 2 of NXT TakeOver: Stand & Deliver after outlasting the competition in a grueling Gauntlet Eliminator the night prior. But would the result have been different if Reed didn’t have to compete the previous night?

In an attempt to defend the patriarch of The Way, Theory went to NXT General Manager William Regal to request this match — unbeknownst to “Poppa John.” Gargano didn’t sound optimistic after Reed pinned Theory in an Eight-Person Mixed Tag Team Match two weeks ago.

Will we see a similar result when Reed and Theory clash one on one, or will Theory be too great a hurdle for The Colossal One?

The Robert Stone Brand haven’t taken their eyes off the NXT Women’s Tag Team Titles, and they’re ready to prove they deserve a chance at the gold.

Stone has seemingly been scheming on his clients’ behalf with the titles in mind since they were unveiled. Will Aliyah & Kamea come one step closer toward a potential opportunity tonight, or will Shotzi & Ember continue to “TCB?”

Tune in to NXT tonight at 8/7 C on USA Network!

The puzzling situation between Killian Dain & Drake Maverick and Imperium will come to a head tonight on NXT as they clash in tag team action.

But when Drake came to seek retribution last week, Dain held him back, later leading to an argument between the two partners.

Will they be back on the same page tonight when they face off with Marcel Barthel & Fabian Aichner? Or will they be conquered by Imperium?

Adam Cole
share story
USC basketball might be showing more interest in 5-star recruit As the summer continues and we enter a new recruiting world, things are starting to heat up for a lot of prospects in the 2022 and 2023 clas...
2 MINS AGO • USATODAY.COM
Fox Sports™ and © 2021 Fox Media LLC and Fox Sports Interactive Media, LLC. All rights reserved. Use of this website (including any and all parts and components) constitutes your acceptance of these Terms of Use and Updated Privacy Policy. Advertising Choices. Do Not Sell my Personal Info