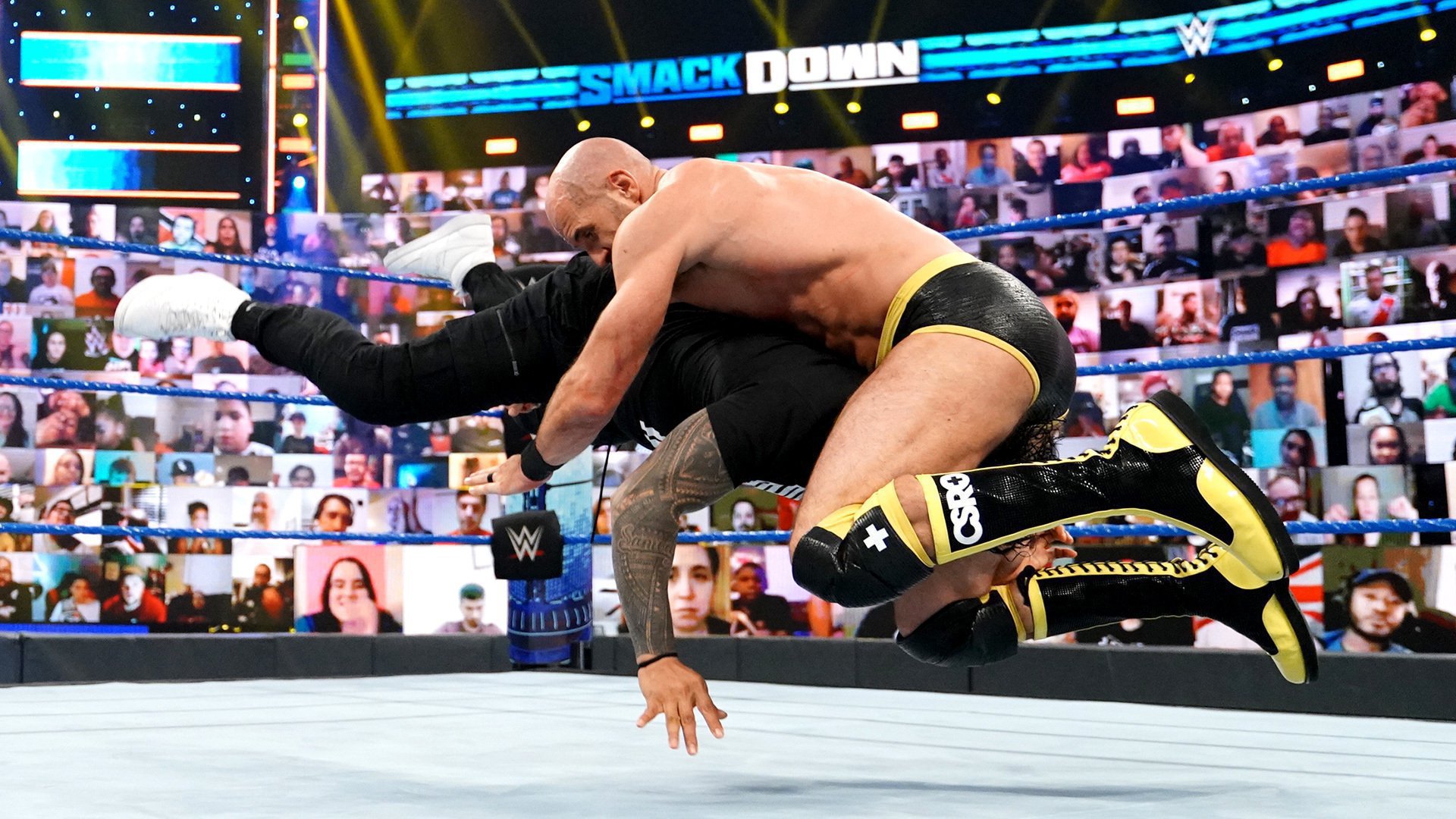 As Jimmy Uso continues to frustrate The Head of the Table by failing to acknowledge him, the Universal Champion challenged his cousin to step up against The Swiss Superman.

Tamina & Natalya came out determined to end the reign of the dominant Nia Jax & Shayna Baszler in a WrestleMania rematch. The Irresistible Force delivered déjà vu to Tamina with another Samoan Drop into the barricades, but The Queen of Harts helped the challengers battle back. After another Samoan Drop to Natalya, Tamina sprang into action with a Superfly Splash that clinched the shocking title win.

As Apollo Crews attempted to present the Nigerian Medal of Honor to Commander Azeez, his fiercest Intercontinental Title challengers brought mayhem to the scene.

Just two days ahead of the SmackDown Tag Team Title Match at WrestleMania Backlash, Rey Mysterio and Dolph Ziggler went at it hoping to make one final statement. A controversial near low blow on a slide from The Master of the 619 incensed Robert Roode, but The Showoff rallied back and nearly grabbed a win with a Famouser. However, Rey would follow his son Dominik’s lead from last week and catch Ziggler by surprise with a quick roll-up win.

Bianca Belair and Bayley engaged in war of words

In a battle of royalty, King Corbin used his strength to reign supreme over The King of Strong Style. After an acrobatic reversal allowed Shinsuke Nakmura to lock in a triangle hold, Corbin powered through into a pin that led to the victory. Nakamura was far from finished as a Kinshasa downed Corbin and allowed The King of Strong Style to steal his rival’s beloved crown.

Jimmy Uso was looking to make a statement after over a year away from the squared circle, but Cesaro had his own message to deliver. The Swiss Superman put his strength and athleticism on display with a cannonball that grounded Uso and a massive Superplex that shook the ring. As Cesaro showed his dominance, Roman Reigns entered the fray, but his WrestleMania Backlash challenger had the final word with back-to-back Neutralizers on Jey Uso to end the night.

Natalya
share story
Blue Jays unable to trump ace in loss to Yankees With their margin for error as slim as the bullpen pickings, the Blue Jays can’t afford any slippage.
3 MINS AGO • TORONTOSUN.COM
Fox Sports™ and © 2021 Fox Media LLC and Fox Sports Interactive Media, LLC. All rights reserved. Use of this website (including any and all parts and components) constitutes your acceptance of these Terms of Use and Updated Privacy Policy. Advertising Choices. Do Not Sell my Personal Info