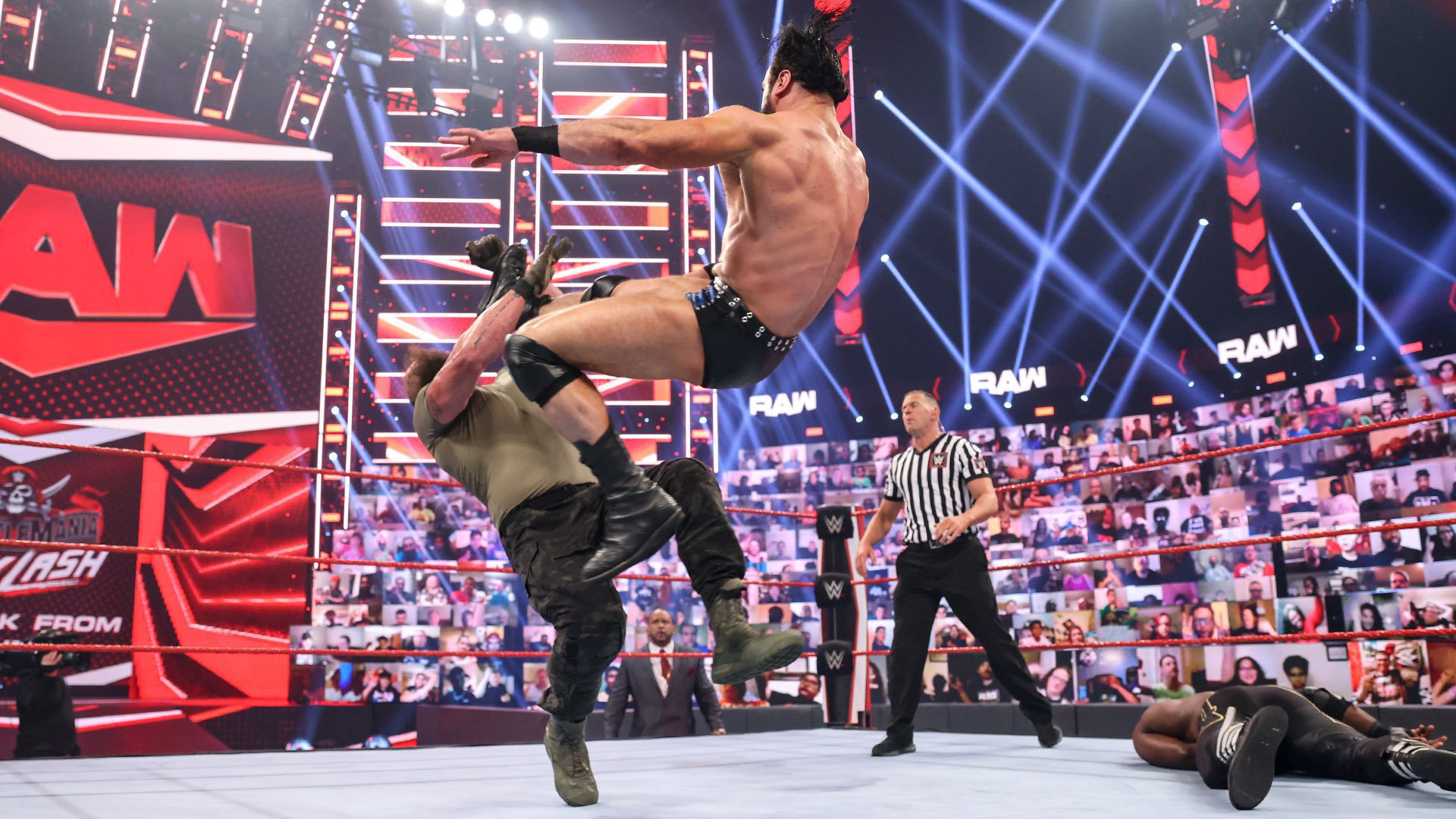 Moments after a Drew McIntyre distraction allowed WWE Champion Bobby Lashley to triumph over Braun Strowman, the Scottish Superstar took out both of his WrestleMania Backlash opponents with a pair of Claymore Kicks. Plus, AJ Styles & Omos retained their Raw Tag Team Titles against The New Day, WWE Women’s Tag Team Champions Shayna Baszler & Nia Jax overcame Naomi & Lana and so much more.

AJ Styles and Omos returned to the red brand for the first time since winning the Raw Tag Team Titles last month at WrestleMania only to be ridiculed by The New Day for their multiple-week vacation.

In the subsequent Raw Tag Team Championship Rematch, however, The New Day failed to reclaim their titles from AJ Styles & Omos after Styles hit the Phenomenal Forearm on Xavier Woods off the towering shoulders of his own personal colossus.

After being reinstated to Raw from her indefinite suppression by WWE Official Sonya Deville and celebrating with a victory over Mandy Rose last week, The Queen kicked out of Dana Brooke's Swanton off the top rope and made her opponent tap out to the Figure-Eight Leglock. When Flair wouldn't break it after the bell, though, Rose stepped through the ropes and knocked her out of the ring.

Afterward, Deville added Flair to the WrestleMania Backlash Raw Women’s Title Match to make it a Triple Threat Match. In response, Rhea Ripley and Asuka both voiced their displeasure, and it wasn't long before chaos erupted between all three Superstars.

After helping The New Day pelt The Miz, John Morrison, Elias and Jaxson Ryker with tomatoes last week, Damian Priest took on The Shaman of Sexy. When The A-Lister's distraction backfired, it opened the door for The Archer of Infamy to triumph with Hit the Lights.

The former members of The Hurt Business looked get back on the winning track against The Lucha House Party. After Gran Metalik pinned Shelton Benjamin with the elbow off the ropes, an irate Cedric Alexander seized the mic, declared Shelton the weak link of their team and made it clear he was done with his tag team partner.

After mocking the suave Angel Garza, Drew Gulak battled The Lethal Lothario. After Garza emerged victorious with the Wing Clipper, he placed his flower in an uncomfortable position and added a kick for (bad) measure.

After Elias and Jaxson Ryker accidently covered Randy Orton with rotten tomatoes while trying to get even with The New Day backstage, The Viper and his R-K-Bro "partner" Riddle reigned supreme over the fruit-wielding assailants with Orton hitting the RKO on Ryker and Riddle hitting the Floating Bro on Elias for the pin.

Moments after signing his WWE contract and becoming a Superstar on Monday Night Raw, Mansoor was offered the opportunity of a lifetime when Sheamus invited him to a match. Mansoor reused to lay down for The Celtic Warrior, which set the stage for a heated showdown. But before a winner could be determined, Humberto Carrillo emerged and attacked The Celtic Warrior as payback for an attack earlier in the night. Nevertheless, Sheamus roared back and hit a Brogue Kick on Humberto and Mansoor.

Naomi and Lana hoped to make Nia Jax and Shayna Baszler feel the glow and walk out as the new WWE Women’s Tag Team Champions. When Reginald interfered, however, it cost the challenger valuable seconds. That was all Baszler needed to make Lana tap out to the Kirifuda Clutch.

Two weeks before the WWE Championship Triple Threat Match at WrestleMania Backlash, WWE Champion Bobby Lashley battled Braun Strowman, with Drew McIntyre joining the Raw announce team. When the action moved outside the ring, The Monster soon got into an altercation with The Scottish Warrior. Although Strowman beat the count back into the ring, further disruption by McIntyre allowed The All Mighty to reign supreme with the Spear.

In the aftermath, McIntyre took out Lashley and Strowman with Claymore Kicks.

Omos
share story
Saturday's top prospect performers Here's a look at Saturday's top Minor League performers from each team's Top 30 Prospects list:
7 MINS AGO • MLB.COM
Fox Sports™ and © 2021 Fox Media LLC and Fox Sports Interactive Media, LLC. All rights reserved. Use of this website (including any and all parts and components) constitutes your acceptance of these Terms of Use and Updated Privacy Policy. Advertising Choices. Do Not Sell my Personal Info