While Genie Bouchard was putting Maria Sharapova on blast for having the gall to return to the sport after dutifully serving a harsh drug suspension, the five-time Grand Slam champion stayed quiet, refusing to enter the fray. She didn’t bite on questions about the critical comments made by Bouchard or other peers and when she lost to Bouchard in a second-round match this week at the Madrid Open, Sharapova kept on driving the high road, offering a “well done” at the net only to be met with an icy stare from Bouchard, who was awfully pleased with herself in press.

The matter appeared to be put to bed, at least until the next time the two play, until Sharapova threw some of the stealthiest shade imaginable, all with a single tap of a button. It’s glorious.

So, Sharapova has a book coming out in September. It’s called Unstoppable: My Life So Far and is being touted as a memoir about “sacrifice” and “a girl and her father and their crazy adventure.” In recent weeks, Sharapova has occasionally tweeted pictures of the cover. 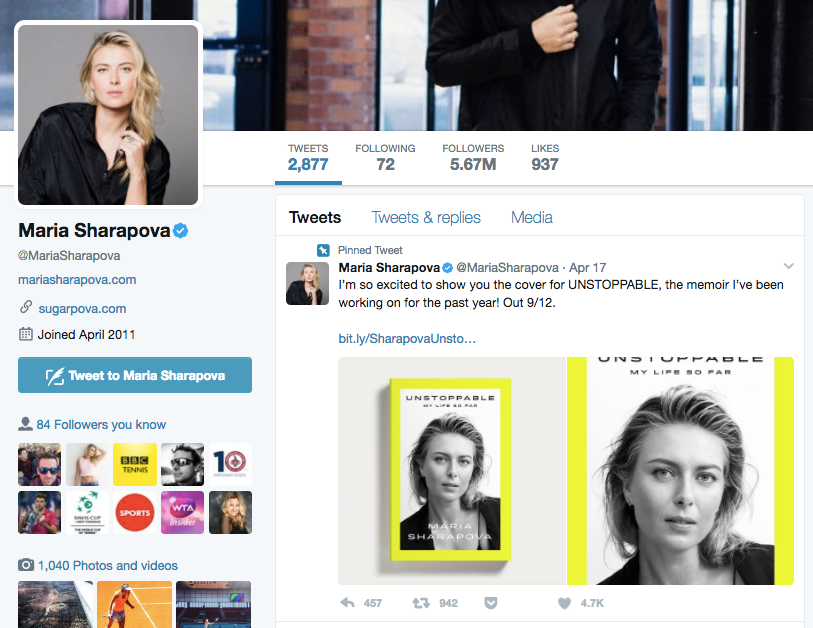 Then, on Tuesday, one day after the match, a Photoshopped image that appeared to come from this Twitter page made its way around the online tennis community, spoofing the Sharapova cover and her new nemesis.

Get your copy of Genie's book at Barnes & Noble today! #bookcoversmaybe pic.twitter.com/rKYz70gwp2

Oh, that’s quite good. A little on the nose maybe but a nice rallying cry for the pro-Masha crowd.

And that was that; just another normal day on Twitter … until:

And … gold. The picture clearly made its way to Sharapova who clearly enjoyed it. Rather than retweet it out to her 5.67 million followers or comment on it, which essentially does the same thing, Sharapova went for the simple “like” option. The benefit of “like” is that the post doesn’t show up on any of Sharapova’s three main pages (tweets; tweets & replies; and media), which helps her maintain a sort of plausible online deniability. Checking to see somebody’s likes isn’t a normal part of the Twitter experience, especially if using Tweetdeck or the phone app. It’s the sort of thing that would go unnoticed by almost everybody – maybe a couple hundred people would have seen it – until one person shares it with everybody else.

The message is still the same. Finally, it’s a counterattack, if only an unspoken one. The whole thing has a sort of impishness that’s classic Sharapova, tacitly saying that all of this is on her terms. She’ll make a small statement like this but won’t provide the soundbite that’ll be replayed ad nauseam. It’s not overt enough to be a salvo but it’s definitive enough to be an ethos. It’s the opposite of Bouchard telling a Turkish TV station that Sharapova should never play tennis again or Serena Williams taking not-at-all-veiled shot at Sharapova in a 2013 Rolling Stone interview. Subtlety is a lost art.

Bouchard had it coming. In addition to the “cheater” who should never “be allowed to play that sport again” from two weeks ago, the 23-year-old Canadian, who was on a seven-match losing streak entering Madrid, said this after defeating Sharapova (in case the scoreline and her Oval Office-like power handshake and icy stare at the net didn’t get the point across):

“Some girls in the locker room are coming up to me and really wishing me good luck before matches, which doesn’t normally happen to me. It showed me that most people have my opinion, and they were just maybe scared to speak out. But privately, you know, I’ve gotten a lot of support.”

That’s some kind of delusional self-martyrdom. (And there’s some doubt about how many people texted, called or approached her – Simona Halep, the former world No. 2, shot her involvement down with such glee: “I didn’t wish good luck to Bouchard because we don’t speak, actually. She’s different.”) Bouchard is a hero because she beat a rusty Sharapova in a second-round match at a second-tier tournament? Maybe in her world, where Sharapova’s cheating, wild cards, unpopularity and status as a fallen idol has become her personal cause, keeping the sport safe from over-the-counter drug users who tested positive for a substance that had been legal 27 days before.

All those insults, all those digs, all those words. And then Sharapova got the final one, without saying a thing.