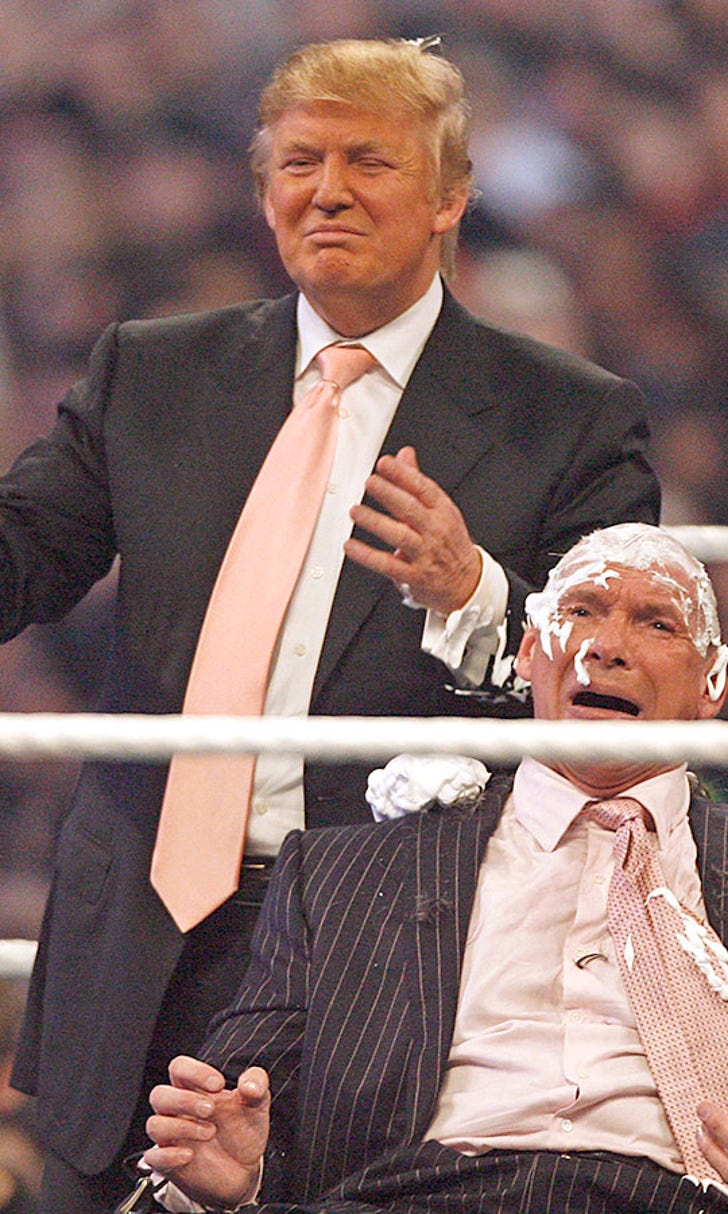 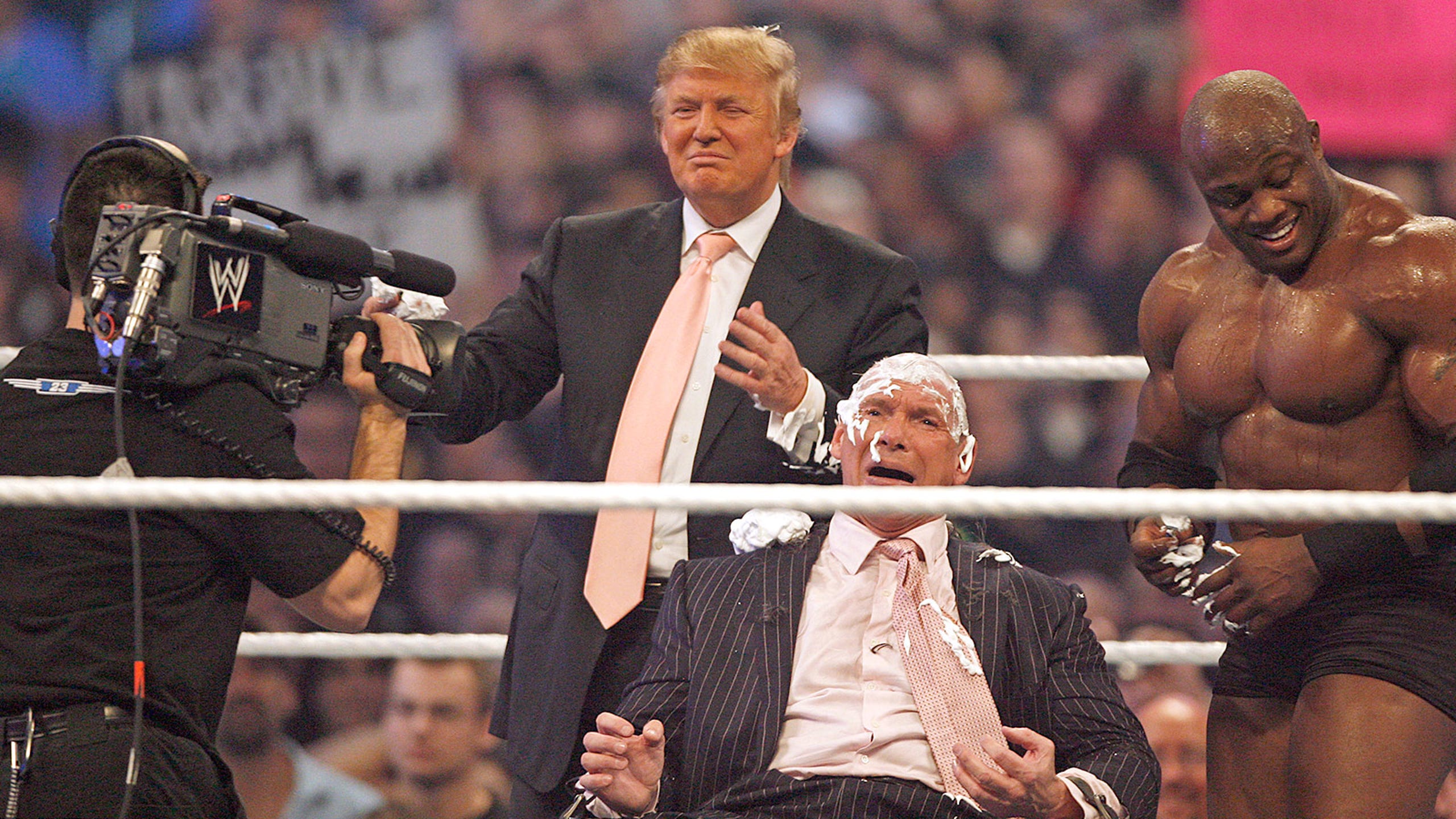 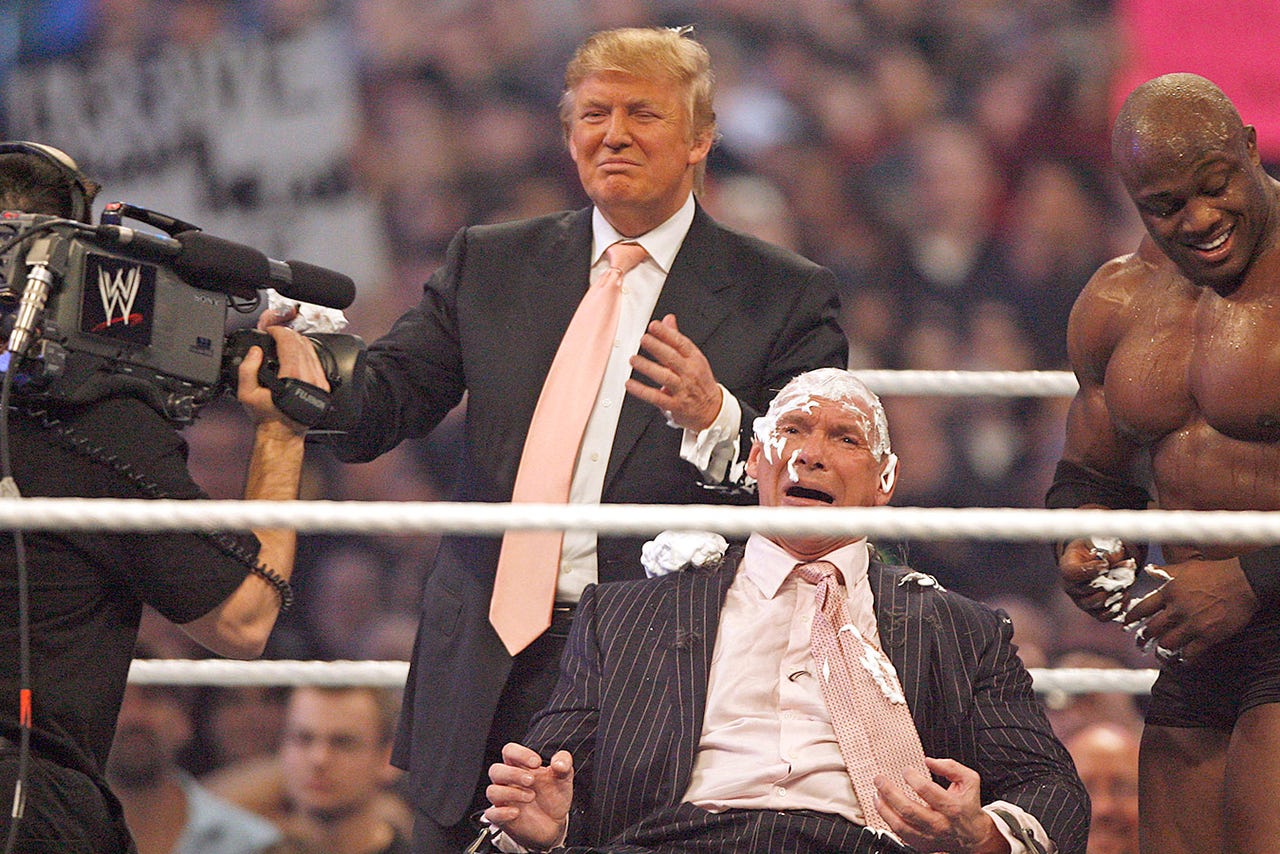 As boxing promoter Don King, another infamous American pop culture icon, has often declared, "Only in America" can a billionaire businessman, enterprising entrepreneur, reality TV show star, and WWE Hall of Fame inductee have a viable chance to become the President of the United States.

Years after Donald Trump burst onto the WWE radar after his Atlantic City property hosted consecutive WrestleMania events (IV and V), "The Donald" has created immense interest in politics as he seeks the Republican nomination for President of the United States.

The manner in which The Donald works -- works up? -- his audiences while stumping is vintage WWE. Watch the mannerisms. Walk to the mic, and the crowd quiets. Walk away, and the decibel level rises. Step back to the podium, step away, all the while pumping up a throng that is ready to hang on every word and thought. 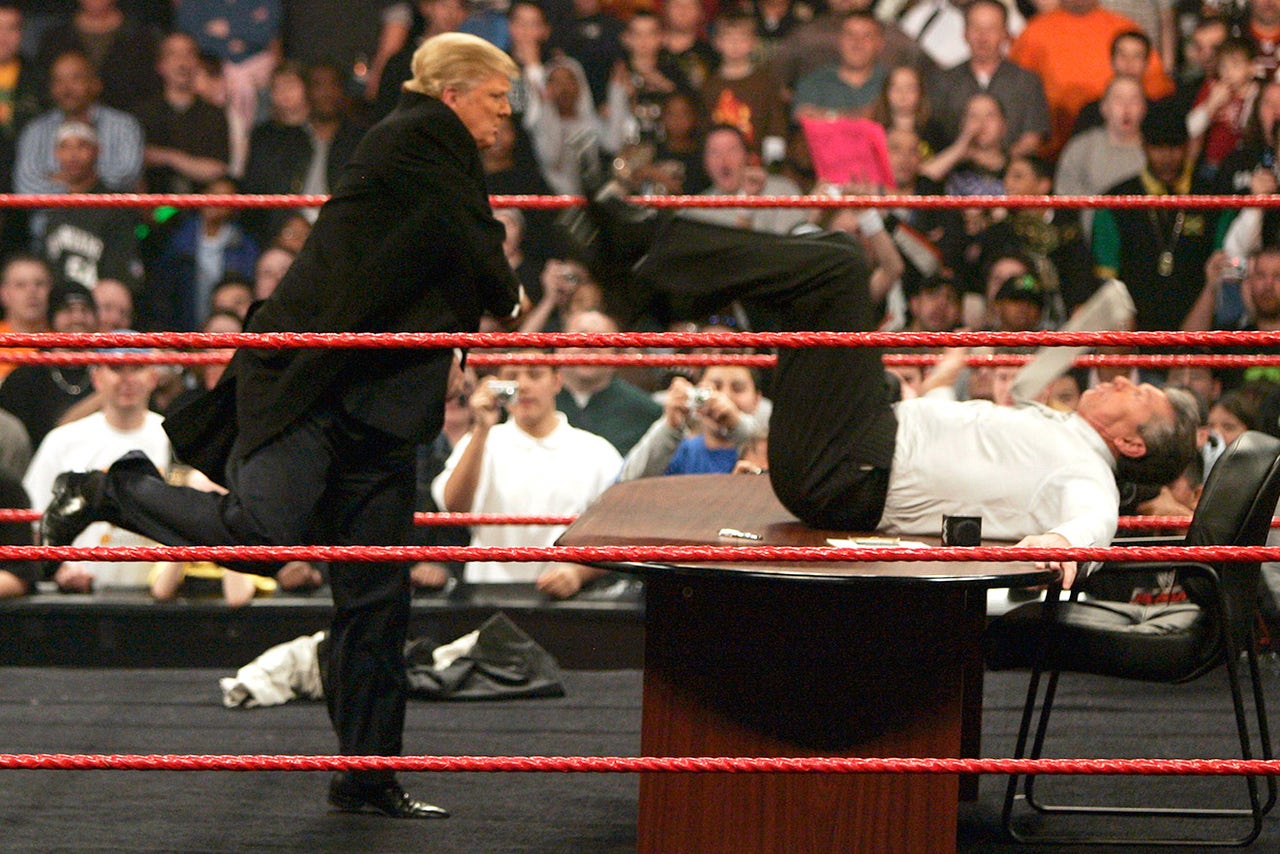 Trump throws McMahon across a table during the contract signing for the "Battle of the Billionaires."

Everything plays out the way it would if the event were happening from a wrestling ring on Monday Night Raw. And with good reason: Trump was enmeshed on WWE TV in one of the most successful storylines in company history.

I witnessed it first-hand, having worked with Mr. Trump on multiple occasions via WWE broadcasts that culminated in the "Battle of the Billionaires" at WrestleMania 23 in Detroit in 2007. These opportunities gave me a unique view of the polarizing candidate.

Trump is a natural-born communicator, a showman who seamlessly integrated into the WWE lexicon by playing himself against a rival billionaire, WWE chairman of the board and resident villain Vince McMahon.

McMahon found a worthy foe in Trump, who was the chairman's first adversary that actually had more cash than the WWE czar. Trump proved to be a man who could match McMahon's bravado, which is no small feat, in an organic and natural manner. The fans ate it up, especially when Trump confronted McMahon on live TV.

Trump evolved into a compelling character during the early part of 2007 that saw the real-estate tycoon significantly increase TV ratings as the viewers became emotionally invested in the "Battle of the Billionaires." This would lead to Trump's WrestleMania 23 representative Bobby Lashley defeating McMahon's surrogate, the late Umaga, to win the distinction of shaving McMahon's head before over 80,000 fans who assembled at Ford Field and a massive pay per view audience from around the world.

Yes, that WrestleMania was all about the hair ... FollicleMania!

Only one WrestleMania broadcast, the first Rock vs. John Cena clash in WrestleMania XXVIII, rivals the financial results of WM23 in Detroit, an amazing accomplishment.

Indeed, "The Donald" had similar box office magic as did Dwayne "The Rock" Johnson and John Cena. Believe 'dat! 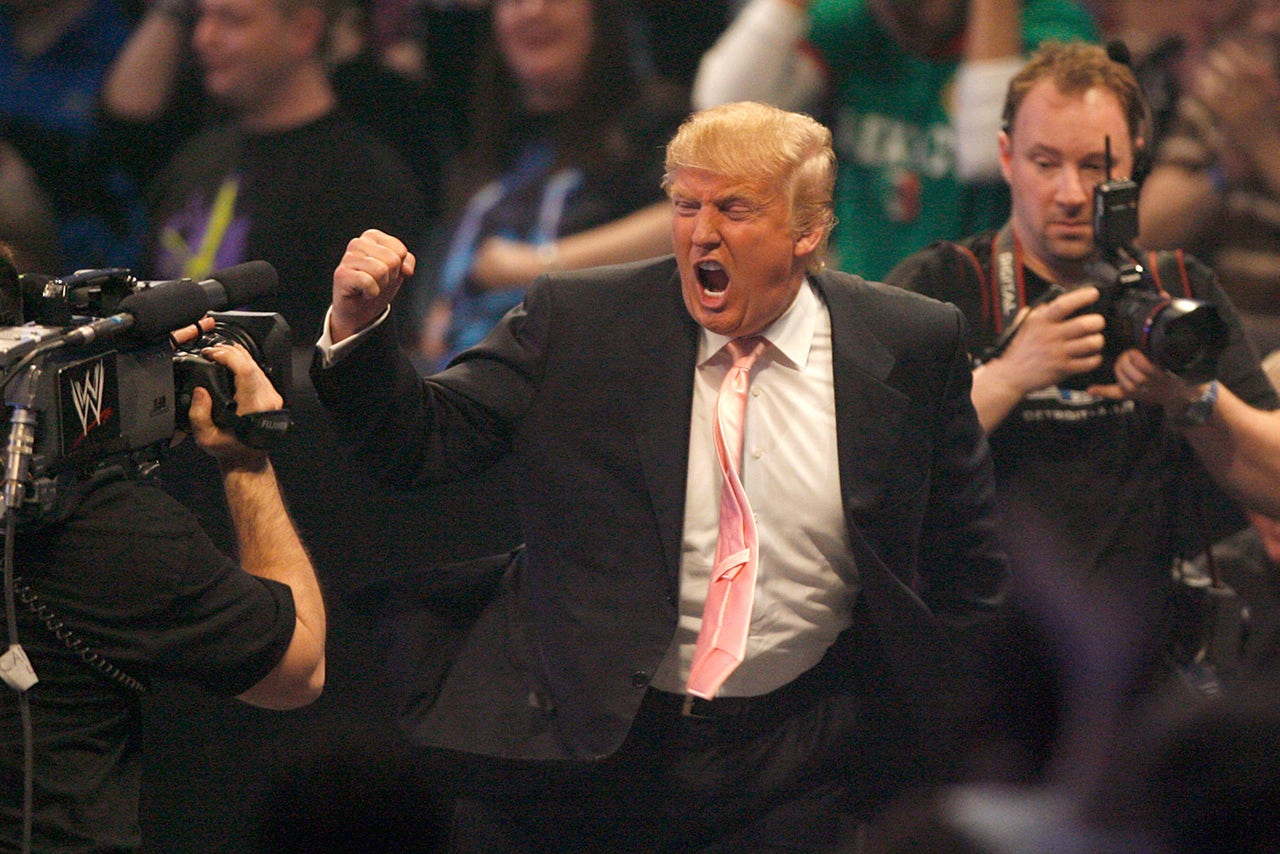 Trump celebrates his win over McMahon at WrestleMania 23.

Trump and McMahon sealing the deal for their hair match was extemporaneous, ad-libbed TV at it's best. Trump played McMahon as if the WWE honcho were Ted Cruz. The crowd ate the presentation up as the buildup to WrestleMania 23 progressed in a major way.

Trump's "Let's Make America Great Again" mantra was foreshadowed by his "buying" Monday Night Raw and vowing to take it from the evil McMahon and make the show great again.

Lashley won the match for Trump, and The Donald was celebratory in defeat of McMahon as Donald saved his signature hair, but Mr. McMahon wasn't so fortunate. To make matters worse, Vince not only had his head shaved cue-ball clean but he was subjected to a Donald Trump "Billion Dollar Clothesline" in the process. In the uniquely bizarre world of pro wrestling, Donald Trump culminated his foray into the genre with his hand raised and his famous follicles in place on his way to being inducted into the WWE Hall of Fame class of 2013.