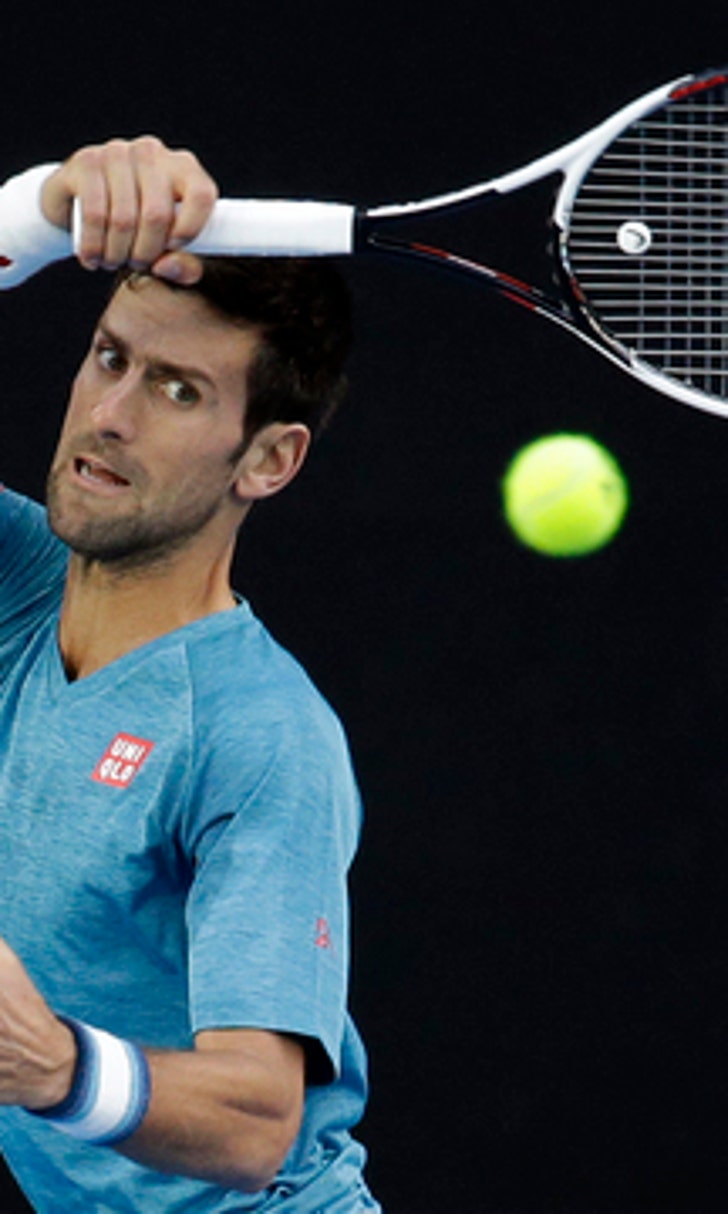 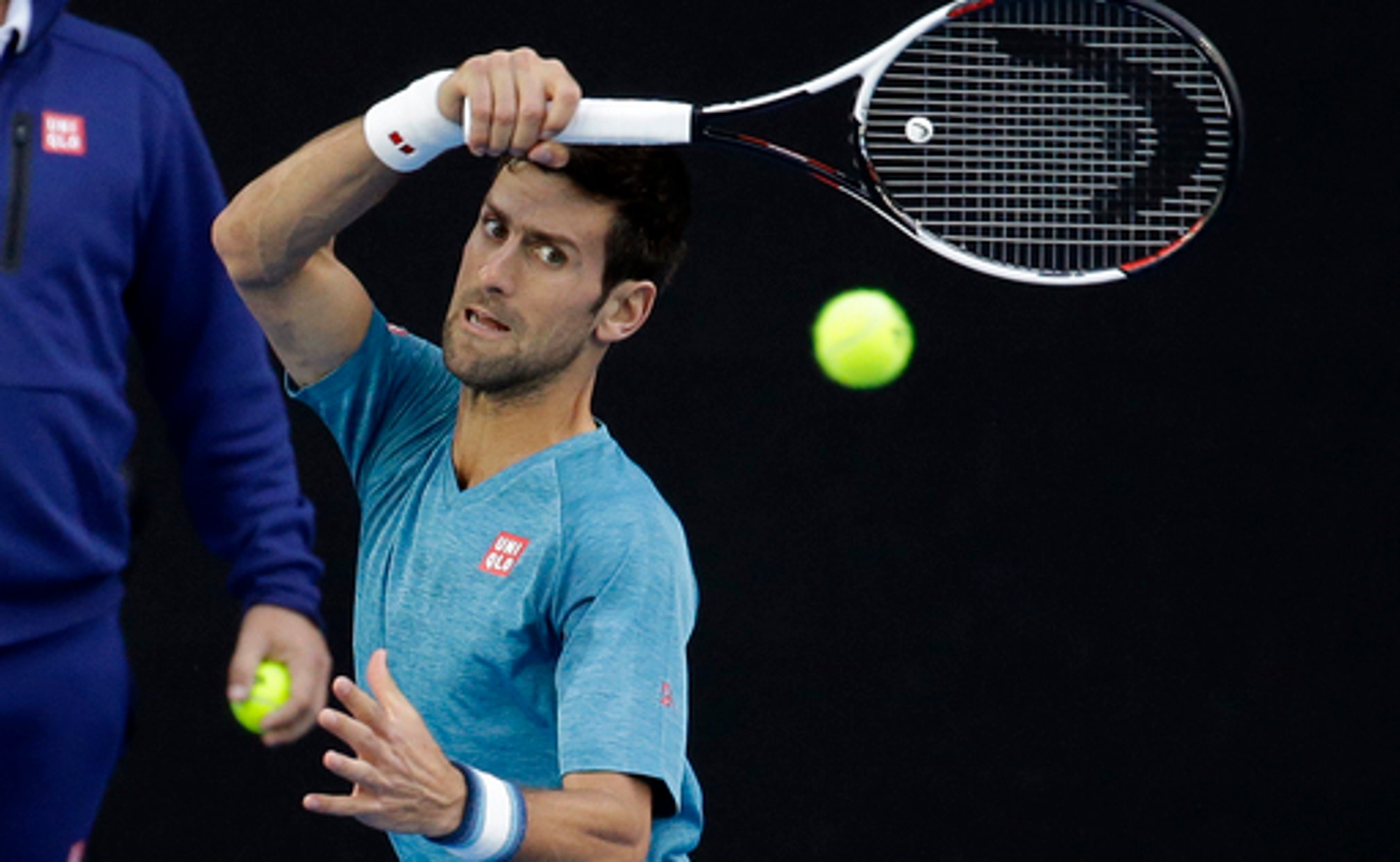 MELBOURNE, Australia (AP) The Latest on Tuesday at the Australian Open (all times local):

The 84-game total broke by one game the mark previously set by Andy Roddick in a five-set win over Younes El Aynaoui in 2003.

Karlovic, who had the advantage of serving to take the lead in the final set, broke Zeballos' serve in the 42nd game of the set, with Zeballos sending an attempted return wide off the court to end the match.

Six-time champion Novak Djokovic is through to the second round at Melbourne Park with a 6-1, 7-6 (4), 6-2 win over Fernando Verdasco, an opponent Djokovic has now beaten nine out of 10 times on a hard court

After Djokovic dominated the opening set, Verdasco saved two break points in ninth game of the second set, sending it eventually to the tiebreaker.

In the third set, Djokovic swept to a 3-0 lead and won in 2 hours, 20 minutes, extending Verdasco's seven-year losing streak against the Serbian player.

Tommy Haas' last appearance at the Australian Open ended with a retirement.

The 38-year-old German was forced to quit his first-round match with an illness on Tuesday while trailing Benoit Paire 7-6 (2), 6-4.

Haas, once ranked as high as No. 2, announced before the season began that it would be his last year on tour. The German's career has frequently been interrupted with injuries, most recently two years ago when he underwent shoulder surgery and again last April when he had surgery on his right foot.

Haas has already been confirmed as tournament director at Indian Wells, California.

Gael Monfils has advanced to the second round of the Australian Open, his 40th Grand Slam tournament.

Monfils, who beat Jiri Vesely 6-2, 6-3, 6-2, lost in the quarterfinals here last year, the first time he had advanced that far in his 11th tournament appearances.

The acrobatic Frenchman reached the semifinals at the last U.S. Open and finished in the year-end top 10 for the first time. He entered the Austrlaian Open as the No. 6 seed.

The pair had never met on hard courts, with Vesely beating Monfils in five sets in the second round at Wimbledon in 2014 before Monfils beat him on clay at Monte Carlo last year in straight sets.

Sam Stosur's long Australian drought has been extended with a 6-3, 3-6, 6-0 loss to Heather Watson, making it back-to-back first-round defeats at her home Grand Slam tournament.The 32-year-old Australian entered the tournament on an eight-match losing streak stretching back to the first round of the U.S. Open last September.

Stosur won the 2011 U.S. Open, a surprising winner over Serena Williams in the final, and has reached the French Open final. Her best run at home, though, remains fourth-round exits in 2006 and '10.

She lost last year to Kristyna Pliskova, who was ranked No. 114. Watson, ranked 81st, has lost in the first round in four of her previous five trips to the Australian Open.

The pair last met on clay at Rome in 2012, when Nadal won in straight sets.

Playing an afternoon match on Rod Laver Arena in 36 degree Celsius (97 Fahrenheit) temperatures, the ninth-seeded Nadal looked sharp despite having taken two injury breaks last year. He played only four matches after a fourth-round loss at the U.S. Open in September.

He's already gone one round longer than last year here. In 2016, he lost to Fernando Verdasco in the first round at Melbourne Park, his only first-round loss at the Australian Open and only the second of his career at a Grand Slam, the other being Wimbledon in 2013 to Steve Darcis.

Milos Raonic and Dustin Brown renewed their Grand Slam duel on Tuesday and the result was the same as the last time - a three-set win for the tall Canadian.

Raonic and Brown met for the first time in the first round of last year's U.S. Open, where Raonic won in straight sets.

Last year as the 13th-seeded player, Raonic had his best performance at Melbourne Park, advancing to the semifinals before losing to Andy Murray.

The 26-year-old Raonic is playing in his seventh Australian Open and in his 24th major. His best result so far has been a run to the Wimbledon final last year.

Serena Williams took her first step toward Australian Open title No. 7 and Grand Slam singles championship No. 23 with a 6-4, 6-3 win over Belinda Bencic.

Williams broke the Swiss player's service in the 10th game to clinch the first set. In the second set, she pulled out to a 5-0 lead but Bencic staged a comeback, breaking Williams' serve the first time she served for the match.

Serving for the match at 5-3, Williams double-faulted on her first match point before clinching it on her second when Bencic netted a backhand.

The last time the pair met - in the Toronto semifinals in 2015 - Bencic won in three sets.

Williams will play Lucie Safarova, who beat Yanina Wickmayer on Tuesday, in the second round.

Konta was a surprise semifinalist at last year's Australian Open, kick-starting a strong 2016 season which saw her break into the top 10 by the end of last year.

The fifth-seeded Pliskova, who beat Serena Williams in the semifinals at Flushing Meadows last year before losing the U.S. Open final to Angelique Kerber, took a 4-1 first-set lead in under 20 minutes.

Pliskova has never advanced past the third round at Melbourne Park, losing each of the last two years at that stage to Ekaterina Makarova.

Serena Williams and Novak Djokovic are set to begin quests for their seventh Australian Open titles on Tuesday at Melbourne Park under sunny skies and temperatures not quite as high as forecast.

Williams, who plays Belinda Bencic in the second match on Rod Laver Arena, is also looking to add to her 22nd Grand Slam singles titles, which would break the record for the Open era.

Djokovic, who has a tough match against veteran Fernando Verdasco to open night play at Rod Laver, has won the Australian Open title five out of the last six years.

The original steamy weather forecast has been scaled back to a high of 35 Celsius (95 Fahrenheit).