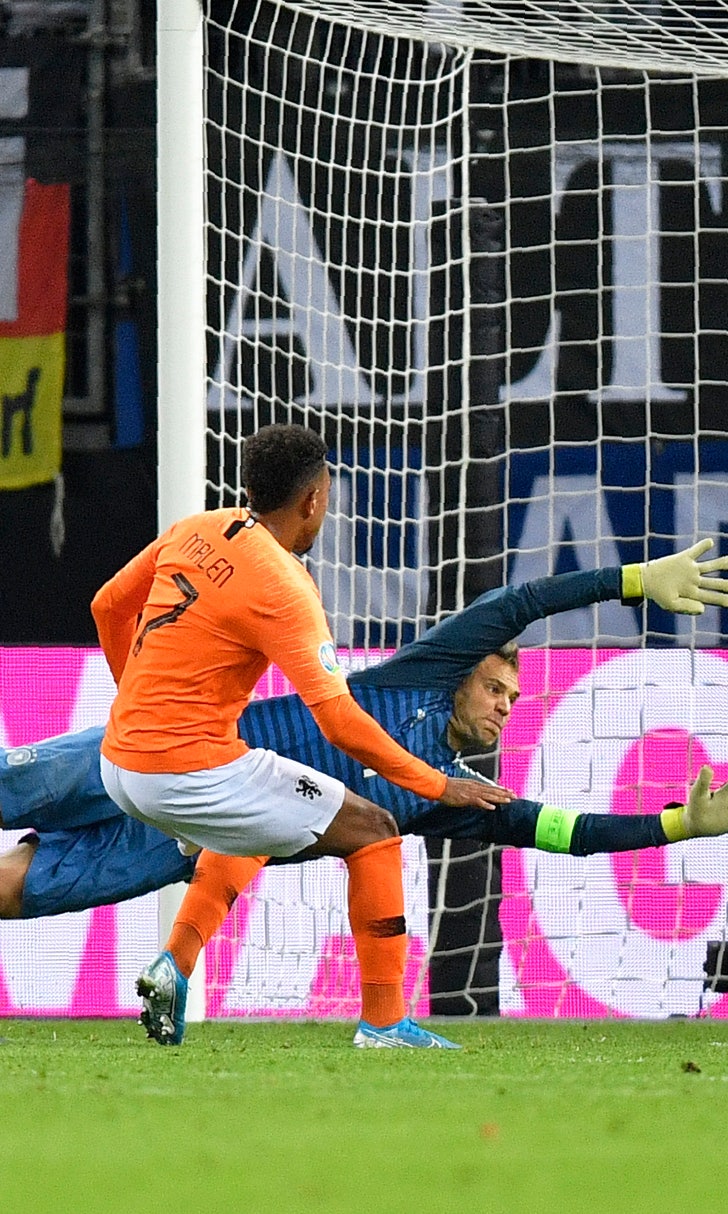 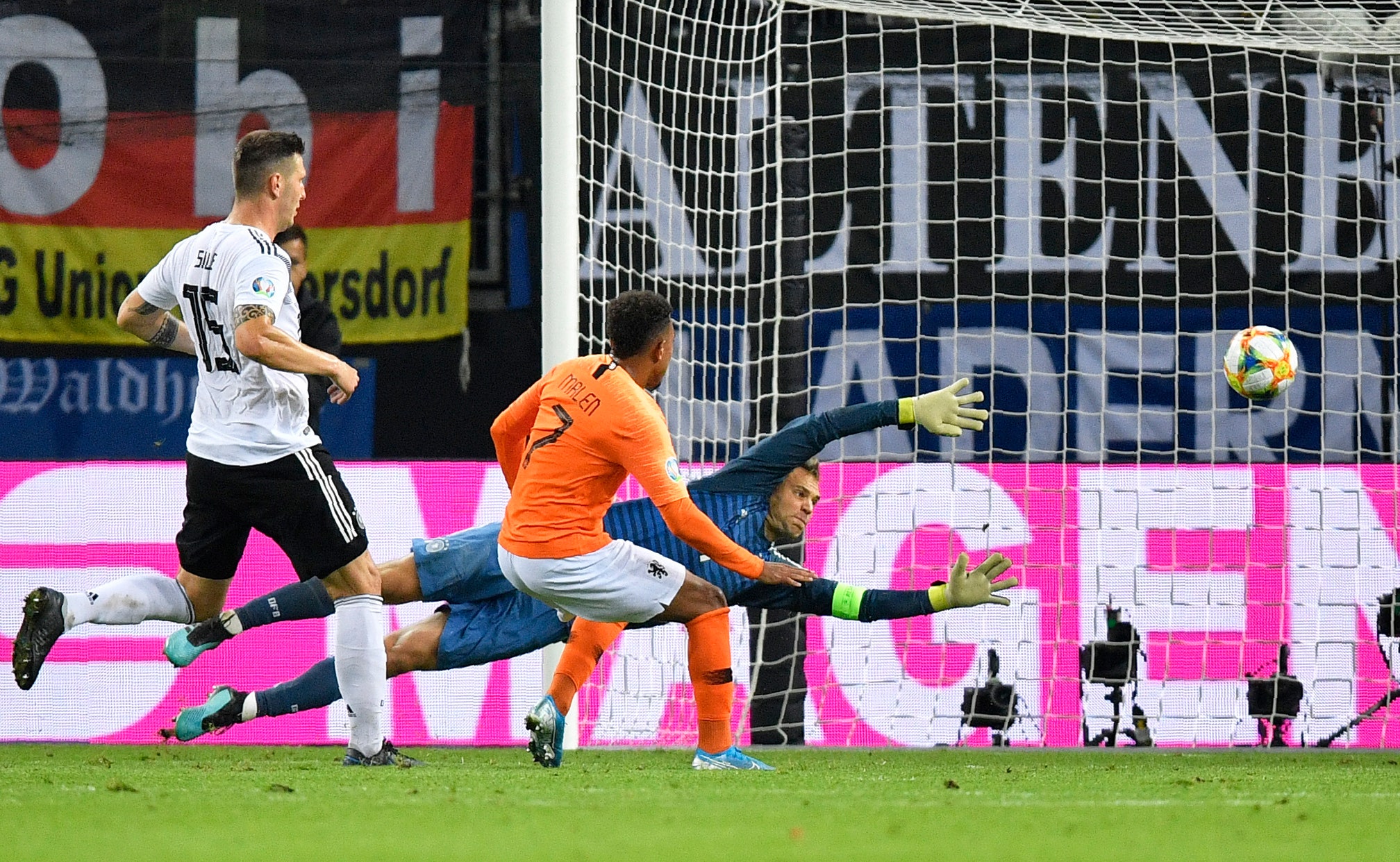 The Netherlands scored four goals in just 32 minutes for a memorable 4-2 comeback win over Germany in European Championship qualifying Friday.

As the old rivals faced off for the fourth time in 11 months, a new face made the difference. On his debut, 20-year-old striker Donyell Malen hit the third goal for the Netherlands off a pass from Georginio Wijnaldum.

Elsewhere, World Cup finalist Croatia recovered from a recent slump to hammer Slovakia 4-0 and close in on a qualification spot.

Belgium swept aside San Marino 4-0 as it marches toward qualification, and Slovenia beat Group G leader Poland 2-0 to spoil the Poles' spotless winning record in qualifying.

Germany was looking for back-to-back wins over the Netherlands and was on track when Serge Gnabry scored off a rebound in the ninth minute.

The Germans did well to track fluid Dutch attacking moves and were a persistent counterattacking threat. But that all changed with two mistakes from defender Jonathan Tah.

First he missed a chance to intercept a cross, allowing Frenkie de Jong to equalize in the 59th. Tah gave the Netherlands the lead seven minutes later, sending a Memphis Depay cross into his own net.

Toni Kroos made it 2-2 for Germany from a penalty which was awarded despite apparent offside in the buildup, but Wijnaldum responded by setting up Malen to restore the Dutch lead. Wijnaldum scored in stoppage time, underlining the Netherlands' second-half dominance.

The Netherlands' win staves off the threat of having to qualify via the playoffs.

While still third on six points, six off group leader Northern Ireland and three off Germany, the Dutch have played one fewer game than both thanks to their run at the Nations League final. Northern Ireland must still play Germany and the Netherlands twice each.

CROATIA BACK ON FORM

Croatia is finally starting to look like the team which reached the World Cup final.

After seven games without a clean sheet, three of them defeats, Croatia shut out Slovakia in style to kick-start its qualifying bid.

Nikola Vlasic opened the scoring in the 45th with a low shot from outside the box. When Ivan Perisic scored with a deflected shot straight after halftime, Croatia never looked back, eventually scoring four goals for the first time since 2017.

Croatia moved level with Hungary, which didn't play on Friday, at the top of Group E.

A surprise semifinalist at the 2016 European Championship, third-placed Wales risked missing out this time despite beating Azerbaijan 2-1. The Welsh were on track to drop points before Gareth Bale's 84th-minute header gave them the win.

It's hard for a 4-0 win to seem unimpressive, but Belgium managed it against San Marino.

The game against one of Europe's smallest nations was scoreless until the 43rd minute, when Michy Batshuayi gave Belgium the lead from the penalty spot. Goals from Nacer Chadli and Dries Mertens secured three points in the second half before Batshuayi scored again in added time.

Russia scored 14 without reply in its previous three games, but lacked bite in a 2-1 win over Scotland. Brazilian-born goalkeeper Guilherme handed Scotland the lead when he palmed an 11th-minute cross into the path of John McGinn for an easy finish.

Russia had a slice of luck in the 40th when a pass deflected off Andy Robertson and landed in front of striker Artyom Dzyuba, who scored his sixth goal in his last four qualifying games — though four of those goals were against San Marino. Russia's second came when Stephen O'Donnell knocked a cross into his own net.

Earlier, Kazakhstan drew with Cyprus 1-1, hurting both teams' already faint qualifying hopes. Belgium leads Russia by a point in Group I, and the Russians have a five-point cushion over Kazakhstan in third.

Poland was looking to match Spain and Italy with five wins from five, but Slovenia had other plans.

Andraz Sporar had a hand in both of Slovenia's goals, teeing up Aljaz Struna for the first at a free kick, and then scoring himself on a counterattack in the 65th.

Austria took advantage to close the gap to Poland to three points with a 6-0 demolition of last-placed Latvia. Austria's win was never in doubt after Marko Arnautovic opened the scoring in the seventh minute. He added a penalty, taking him to six goals in his last four internationals.

Slovenia was third, one point behind Austria.

Donyell Malen
share story
those were the latest stories
Want to see more?
View All Stories
Fox Sports™ and © 2020 Fox Media LLC and Fox Sports Interactive Media, LLC. All rights reserved. Use of this website (including any and all parts and components) constitutes your acceptance of these Terms of Use and Updated Privacy Policy. Advertising Choices. Do Not Sell my Personal Info