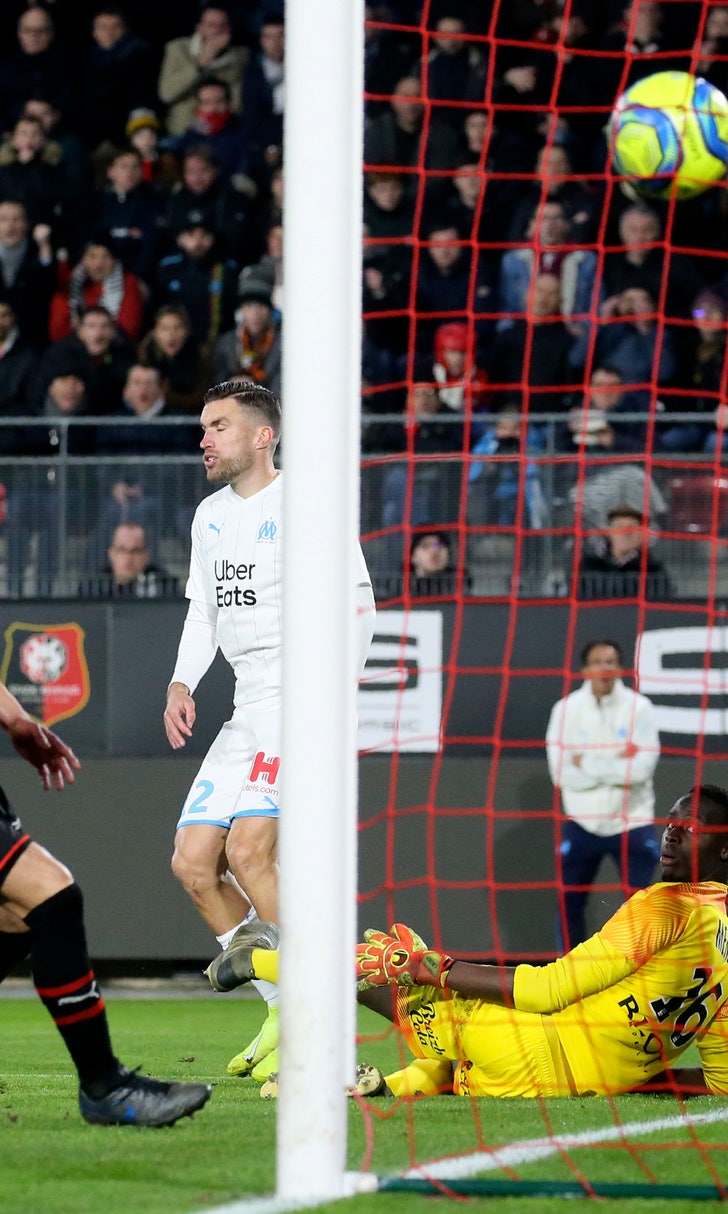 previous story
With a baby on the way, Michelle Wie still has eye on golf
next story
Indians, All-Star Lindor reach $17.5 million deal for 2020

Substitute Kevin Strootman steered in a late winner as Marseille strengthened its grip on second place in the French league by beating third-placed Rennes 1-0 on Friday.

After Dimitri Payet's 84th-minute free kick was saved by goalkeeper Edouard Mendy, Strootman showed good balance to clip the loose ball high into the net from a tight angle just two minutes after coming off the bench.

Marseille is nine league games unbeaten and four points behind league leader Paris Saint-Germain, which has played two games less, and eight clear of Rennes, which plays its game in hand at 19th-place Nimes on Wednesday.

In a tight and physical contest, Marseille center half Alvaro Gonzalez hit the post from 15 meters out following a bizarre corner in the 42nd minute. When Mendy went to clear a routine back pass, the ball hit one of several lumps of crumpled paper thrown from the Rennes fans behind his goal and bobbled up and over his foot for a corner.

Benjamin Bourigeaud's curling shot from just outside the area drew a sharp save from Marseille goalie Steve Mandanda just before halftime. Tempers frayed as players confronted each other in the tunnel at the interval, and the start of the second half was delayed by several minutes.

Rennes forward Raphinha went close with a half-volley from just inside the area which fizzed past the left post in the 67th. Moments later, Mendy kept out a low drive from Payet from a similar distance.

PSG hosts Monaco on Sunday in coach Robert Moreno's first league game in charge of Monaco. He replaced Leonardo Jardim, who was fired by Monaco for a second time.

MSU, KU Reign Supreme at Champions Classic
Michigan State earned its first-ever win over Duke at Cameron Indoor Stadium, and Kentucky stayed cold in a loss to Kansas.
3 hours ago

The Curious Case Of Carson Wentz
Carson Wentz’s fall from stardom is a reminder that whatever heights can be reached in the NFL, past success guarantees nothing.
5 hours ago

Morris Chestnut Enters 'Club Shay Shay'
Actor Morris Chestnut stopped by the club to discuss a sitcom idea for Shannon Sharpe, as well as his hometown Lakers.
6 hours ago

Errol Spence Jr.'s Top 5 Fighters
Ahead of his epic clash on FOX Sports PPV with Danny Garcia, Spence lists the best pound-for-pound fighters in the world.
11 hours ago

MVP Watch: Rodgers Leapfrogs Russ
A red-hot Aaron Rodgers is moving up the odds list of MVP candidates, but the award looks like Patrick Mahomes' to lose.
12 hours ago
those were the latest stories
Want to see more?
View All Stories
Fox Sports™ and © 2020 Fox Media LLC and Fox Sports Interactive Media, LLC. All rights reserved. Use of this website (including any and all parts and components) constitutes your acceptance of these Terms of Use and Updated Privacy Policy. Advertising Choices. Do Not Sell my Personal Info