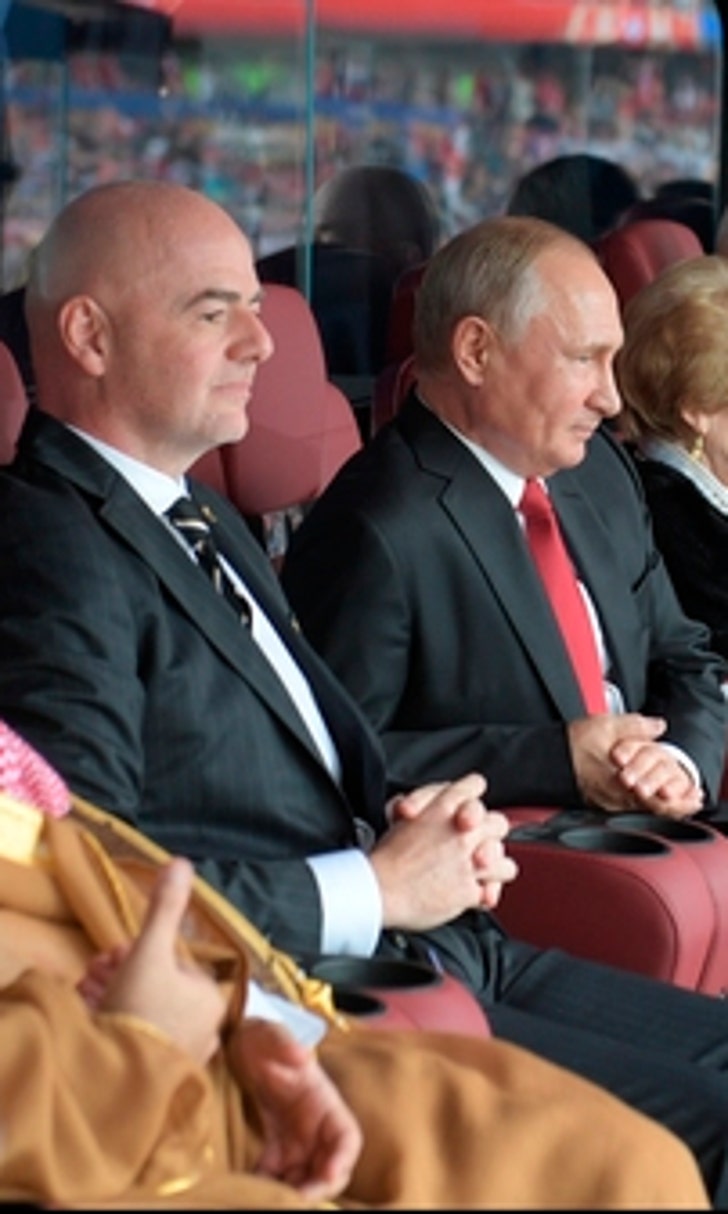 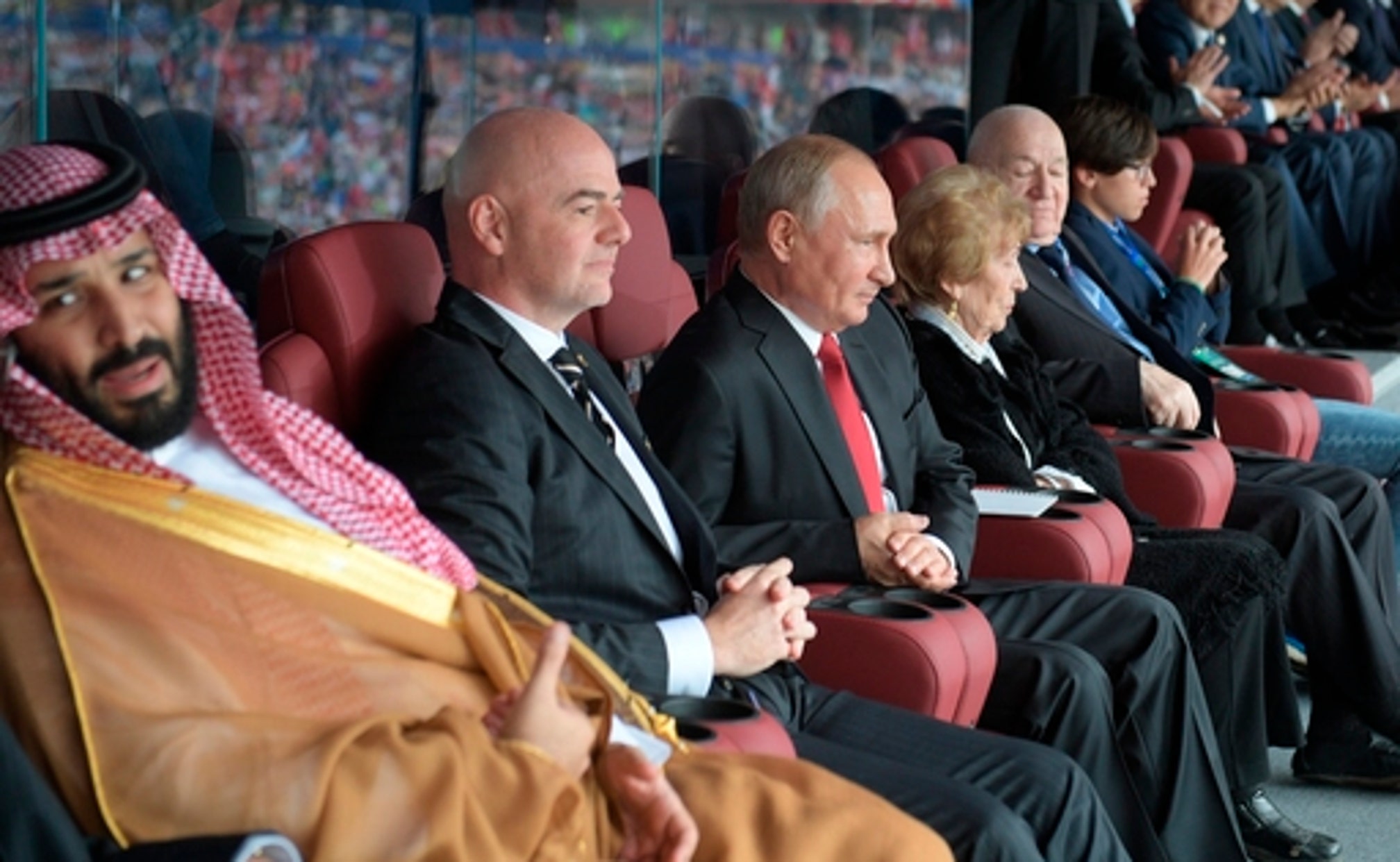 Column: Putin gets luck of the draw at World Cup opener

MOSCOW (AP) When Yuri Gazinsky headed in the first goal of the 2018 World Cup, giving host Russia early joy in what developed into a 5-0 thumping of Saudi Arabia, Russian President Vladimir Putin leaned across to Saudi Crown Prince Mohammed bin Salman with his hand outstretched.

Sandwiched in the middle, Gianni Infantino, the head of tournament organizer FIFA, looked on approvingly.

Football, bringing the world together.

Or so Putin and FIFA would have us believe.

The football mismatch of the opening game Thursday, with a Saudi team so bad it made Russia look better than it is, surely mattered less to Putin than the broader message: For the next month to the final on July 15, Russia is putting its best foot forward and showing a fair-play, gentler side of itself to the world.

Forget that Cold War-like chill in the air in the months that led up to the moment when referee Nestor Pitana of Argentina blew the opening whistle. For 90 minutes, it was old-school football, with long balls hoofed up field and a shortage of dazzling skill. That didn't really matter. ''Dobro pozhalovat'' - welcome in Russian - is, for now, the name of the game.

''Football,'' Putin told the 78,000-strong crowd in his tournament-opening remarks in Moscow's Luzhnniki Stadium, ''has brought us together tonight in a single team.''

That remains to be seen.

In London, Paris and Brussels, government officials may have choked on Putin's proclamation. The World Cup's 32 teams and 64 matches won't sports-wash away the multiple sources of tension that soured relations between the Kremlin and Western capitals in the eight years since FIFA picked Russia as host in 2010, including but not limited to Russia's annexation of Crimea, its military intervention in Syria and assistance to rebels in Ukraine, and the poisoning in Britain of an ex-Russian spy and his daughter.

With the show now underway, it would be churlish not to enjoy the gathering of the global football tribe. And what a gathering it promises to be: Five-time champion Brazil looking to redeem itself after the 7-1 semifinal heartbreak at home in 2014. Its tormentor that day? The 2014 winner Germany, looking as strong as ever. France bubbling like champagne with youthful promise. Cristiano Ronaldo and Lionel Messi both desperate to cap their stellar careers with football's greatest prize of all.

The good news for Russians - those footing the bill of billions for fancy stadiums and other World Cup preening - is that their team isn't as hopeless as many feared and that FIFA's ranking of 70th, the lowest of any of the 32 teams, doesn't accurately reflect its abilities.

Well, not against the 67th-ranked - and frankly awful - Saudis, at least. Not since Russia hammered Cameroon 6-1 in its last group stage match in 1994 have fans in Russian red, white and blue face paint had so much to cheer about at a World Cup.

Russia's other opponents in Group A - Egypt and Uruguay, with their star strikers Mohamed Salah and Luis Suarez - will pose far harder tests. They'll expose whether this Russian team, which has had more than its fair share of injury problems, can become the first post-Soviet squad to get beyond the group stage or whether, against the Saudis, fans were essentially being shown the football equivalent of a Potemkin village - a show that made Russia look better than it really is.

Certainly, when the Saudis were drawn for the opening game against the host, Putin lucked out. More of a judo and ice hockey man than a football fan, the president hasn't been as hands-on with World Cup preparations as he was with the 2014 Sochi Olympics, which were very much his pet project.

But as the goals rained in, Putin's smile seemed smug, like there was nowhere else he'd rather be than at the Luzhniki, with its giant statue of Lenin outside.

If football can deliver a show like this, with victory to boot, he'll take it.

John Leicester is an international sports columnist for The Associated Press. Write to him at jleicester(at)ap.org or follow him at http://twitter.com/johnleicester