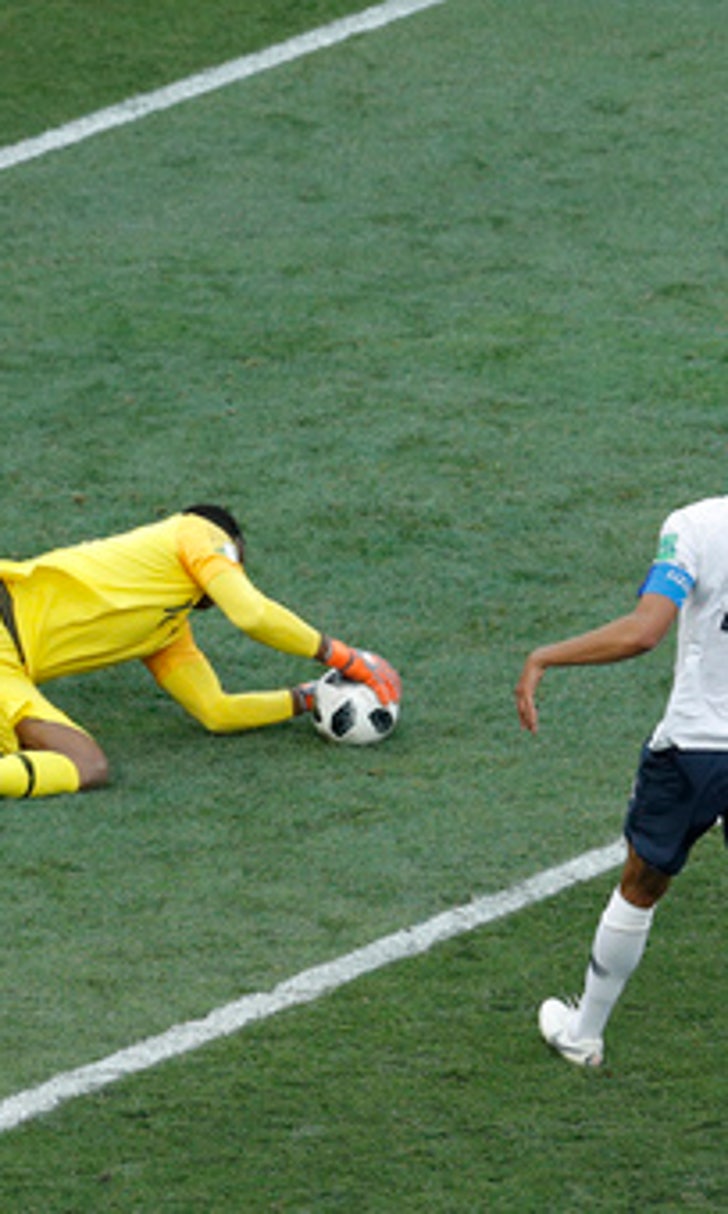 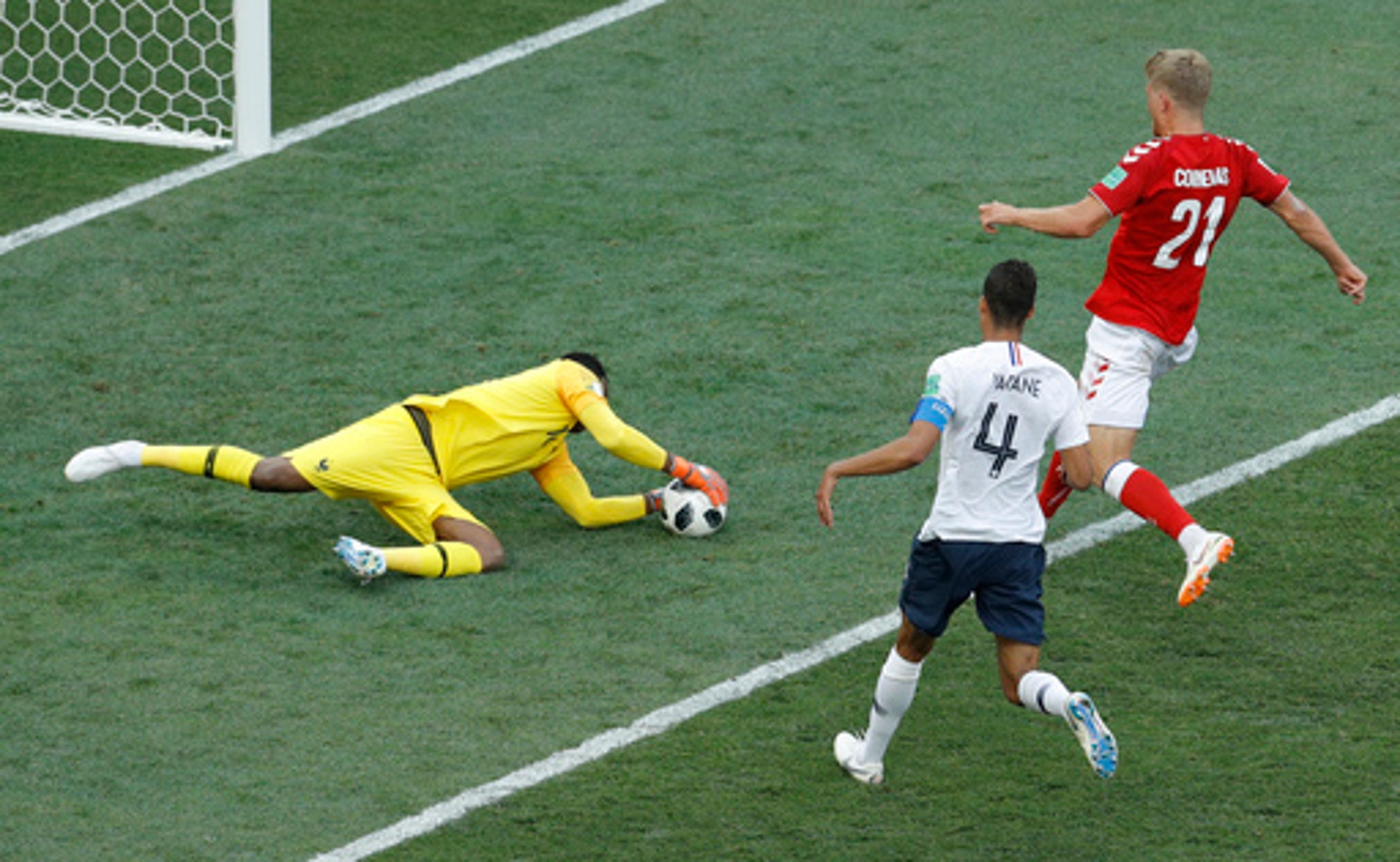 MOSCOW (AP) At the World Cup, a good thing came to a player who waited.

At two World Cups and three European Championships, through 19 major championship matches that must have seemed like an eternity, goalkeeper Steve Mandanda warmed France's bench. He didn't sulk. He didn't kick up a scandal. He didn't walk away and say he'd rather someone else took his place as understudy to France's No. 1 goalkeeper and captain Hugo Lloris.

Instead, he stayed fit, ready and available for the day when France might call on him, crossing his long fingers that it would.

On Tuesday, it finally did.

Mandanda will always remember this World Cup's first scoreless draw, a dull match against Denmark that fans yawned, fidgeted and wolf-whistled through.

In a decade of playing second fiddle on the national team, Mandanda traveled the world, more than a dozen countries from South Africa to Sweden, Ukraine to Denmark, playing 19 exhibition matches and eight World Cup qualifying games but never in the main event.

At 33, he became the oldest Frenchman to make his World Cup debut. He soaked it all in, standing shoulder-to-shoulder with his teammates for La Marseillaise at Moscow's packed Luzhniki Stadium before spitting into his gloves and taking his place between the posts as a butterfly flitted by, as if to congratulate him.

''It's enormous, important. Very satisfying for me personally. A lot of pride,'' he said afterward. ''I'm savoring it. Even if the match didn't please you, I had a whale of a time.''

That France coach Didier Deschamps started his backup goalkeeper for the group-stage match said several things, most notably that the game wasn't very important. A draw suited both sides. It allowed France to qualify as the Group C winner and for Denmark to advance as runner-up.

But it was important for Mandanda, a case of now or never because the chance for him to play won't come around again in the knockout round unless Lloris is unavailable.

Without getting too misty-eyed, fielding the `keeper who made his France debut in 2008 but then saw Lloris supplant him in the pecking order also showed that Deschamps is a straight-up guy who values and rewards loyalty and service.

''It's not to thank him. It's not a gift,'' said Deschamps. ''But it seemed logical to me to offer him this possibility to play a World Cup game and he responded very well on the pitch.''

Having lifted the World Cup himself as France's captain in 1998, Deschamps knows the importance of uniting all 23 members of his squad behind the ambition of winning, including those who don't play. Giving Mandanda memories for a lifetime went down well with other senior members of Deschamps' team. They value the contributions made behind the scenes by the quiet-spoken goalkeeper who, apart from a 2016-2017 interlude at Crystal Palace, has played his club football for Marseille since 2007.

''He patiently waited his turn. Of course, he's a competitor but he is at the service of the group, the team,'' France midfielder Blaise Matuidi said. ''He does a lot of good. We have a lot of young players and he helps them a lot. He manages to communicate with them and gives us advice and that is useful.''

Deschamps also is thinking longer term. Resting Lloris may make him fresher for the knockout stage. The coach said he ran the idea of playing Mandanda past Lloris first and felt that his No. 1 goalkeeper wasn't opposed to a breather.

''A second competition is about to begin,'' Deschamps said. ''The mountain is now ahead of us. But here we are.''

For those who believe such things, the omens look good for France. When France won its first and only World Cup in 1998, it also played Denmark in the last round of group matches, also in Group C. That year, France also won both of its opening games, as it did this time in Russia, and was guaranteed of reaching the last 16 before playing the Danes last. Coach Aime Jacquet rested key players, including his captain, Deschamps - as Deschamps did in this match. And then, as now, Denmark came into the match against France having won its first game 1-0 and having drawn its second match 1-1. Completing the weird set of coincidences: Denmark in 1998, as it does now, also had a man surnamed Schmeichel in goal. That was Peter, father of this Danish team's goalkeeper, Kasper.

Of course, none of that will matter if France loses its next match. But Mandanda, at least, has his special moment to cherish. His 95 minutes on the World Cup pitch felt like a victory of sorts for all of those players who travel to the showcase tournament but don't get to play in it, because there's never room for everyone.

But bravo, Deschamps, for finding room this time.

John Leicester is an international sports columnist for The Associated Press. Write to him at jleicester(at)ap.org or follow him at http://twitter.com/johnleicester