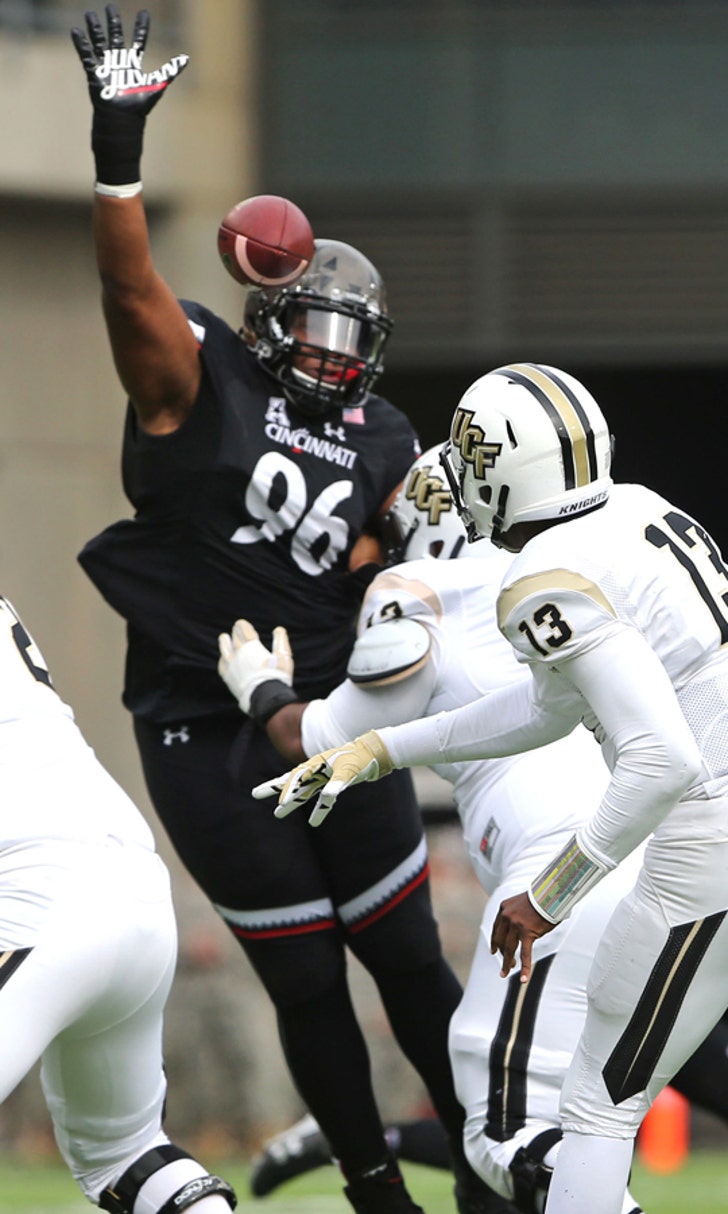 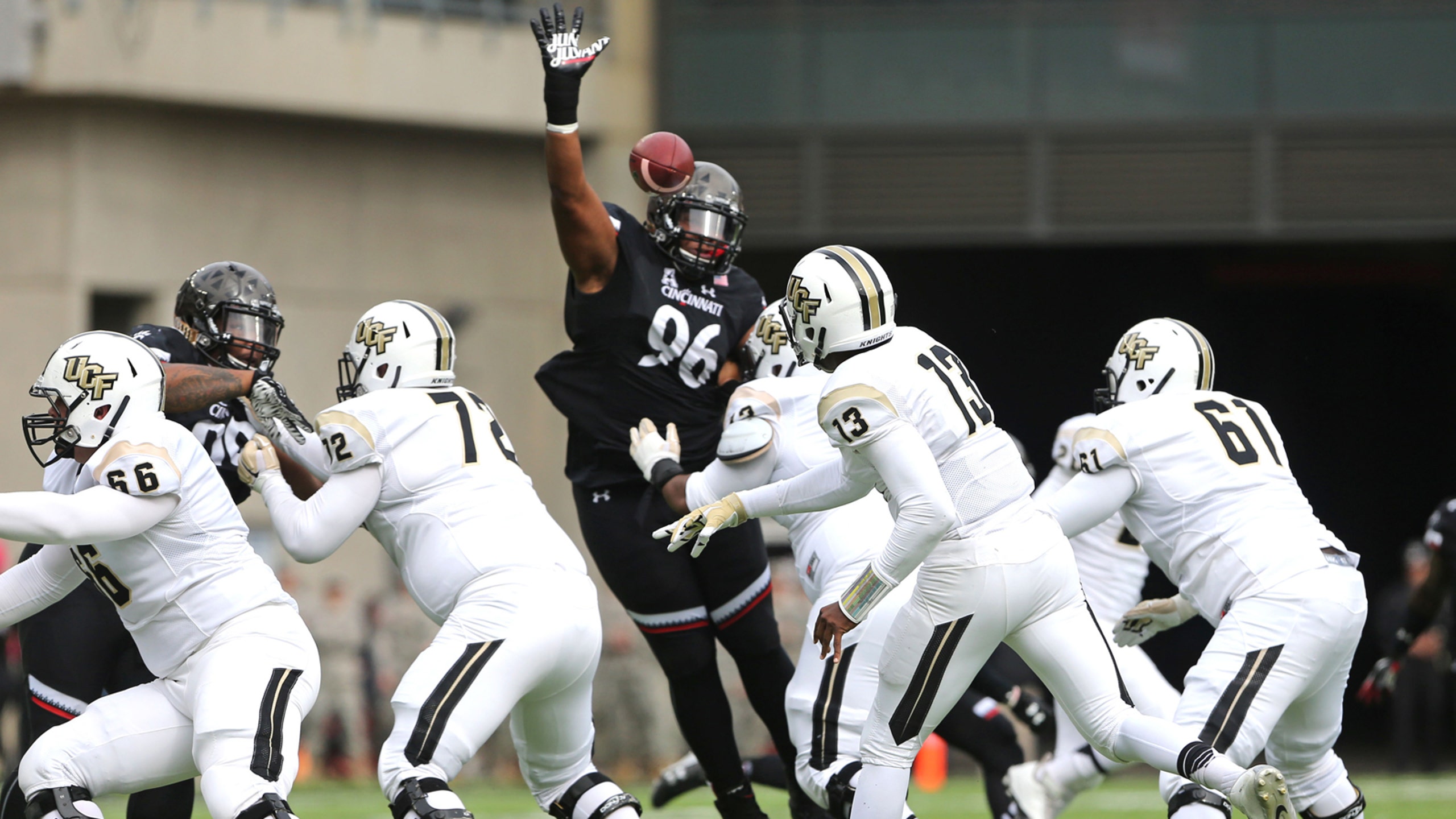 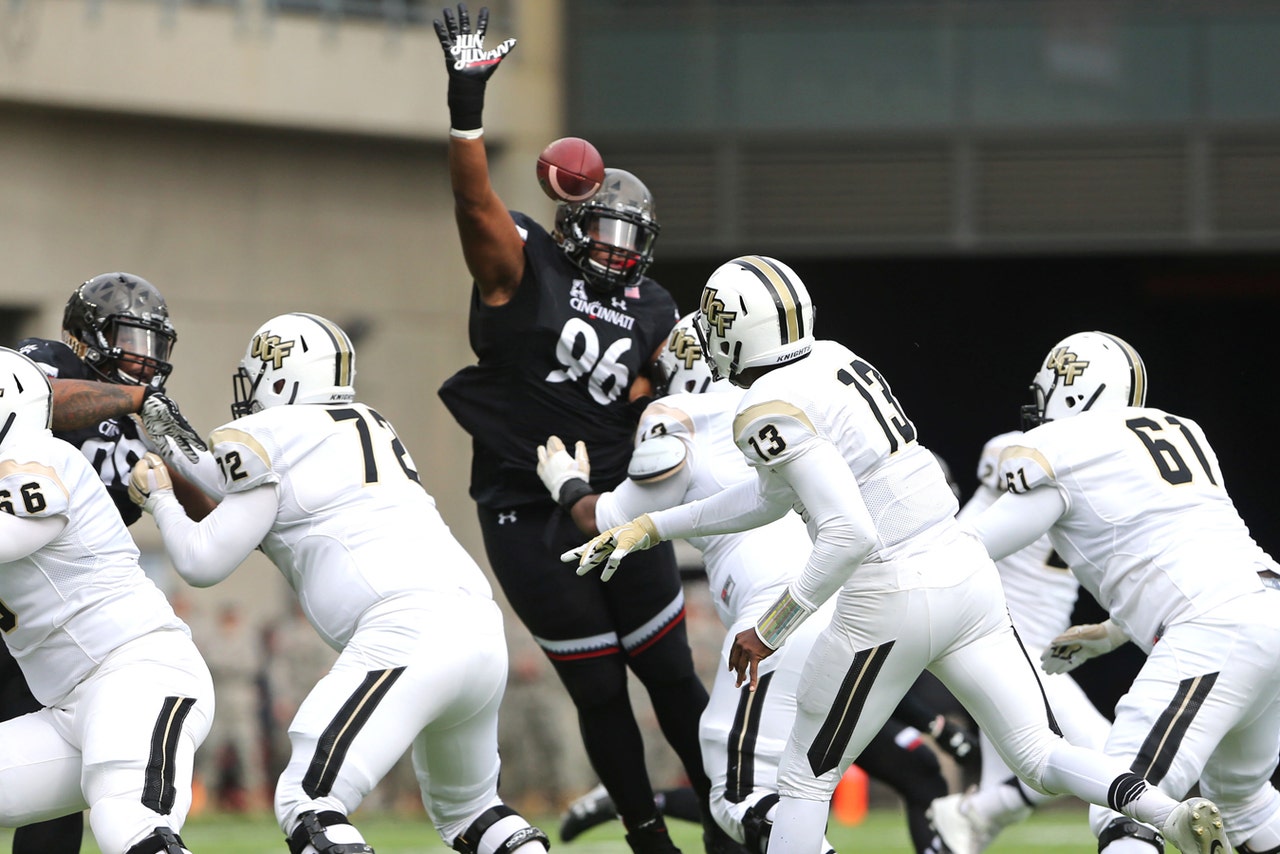 Kiel completed all 15 of his passes for 319 yards and five touchdowns as Cincinnati spoiled Barrett's debut as the interim head coach at Central Florida with a 52-7 win on Saturday.

It was the most attempts without an incomplete pass in the last 20 years in the FBS.

"I didn't know about it until they told me after the game," Kiel said. "It's just huge to be back out there and get into a rhythm."

Barrett, who was the Cincinnati quarterback through 1982, was named interim head coach after George O'Leary resigned after UCF's 59-10 loss to Houston last weekend. Barrett was the Golden Knights' quarterback coach under O'Leary.

"Everything starts with the head coach," said Barrett. "Like I told them in there, I take full responsibility. We've got to get them ready to play, but more importantly we have to get the right people on the field. We are limited in some areas but we've got to find the right people to get on the football field that can do the basic things that we are asking them to do."

Cincinnati head coach Tommy Tuberville had empathy for his colleague.

"You fire a coach in the middle of a season, and you see what you get," Tuberville said. "You don't hurt anybody but those kids out on the field, and I wish them the best. Danny, he's got his hands full in the next three games. Those kids played hard, but you can just tell they weren't focused."

Kiel was 7-for-7 for 158 yards and three touchdowns in the first quarter, then turned the offense over to freshman Hayden Moore, who ran the Bearcats' offense for two games while Kiel recovered from a concussion.

"I had to get my man the record," Kiel said. "Our receivers are the heart and soul of our team. They are so good. They make it easy for me and Hayden. We can throw the ball up and trust them to go get it."

Washington didn't dwell on the record but was happy to set it at home. He extended to 33 games his streak of making at least three catches.

"I tried not to focus on it but everyone was talking about it," Washington said. "I was happy to be able to do it at home in front of my family."

Moore was the victim of a roughing the passer penalty late in the second quarter. Kiel returned to hand off to Tion Green for his seven-yard touchdown run that capped the first half scoring.

Moore did little to hurt himself in Cincinnati's quarterback competition but Kiel's performance is pushing him.

"We'll still have a competition. But it's hard to argue with a guy that went 15-for-15. That's hard to do," Tuberville said.

The Knights (0-9, 0-5) had a first and goal from the Cincinnati 5 with two minutes left in the half but turned the ball over on downs with 35 seconds left and entered halftime trailing 35-0.

Moore and Kiel also split the playing time in the second half with a quarter each. Moore was 11-for-15 for 154 yards and a touchdown. Moore's interception by Shaquill Griffin was the lone turnover for Cincinnati.

"We left a lot of plays on the field," Griffin said. "No matter how bad it is we have to keep pushing."

Matthew Wright had two field goal attempts hit off the goal posts uprights, one in each half for the Knights, who managed 313 yards of offense for the game.

It was 52-0 when C.J. Jones scored from the 1-yard line for the Knights. Jones led UCF with 123 yards on 18 carries, including a 51-yard run that set up his touchdown.

Justin Holman completed 12 of 23 passes for 101 yards and an interception.

Cincinnati had 237 yards rushing and 489 passing for the game. Walk on sophomore Chad Banschbach was the leading rusher for the Bearcats with 75 yards on 18 carries. Luke Wright completed a 16-yard pass to Banschbach.