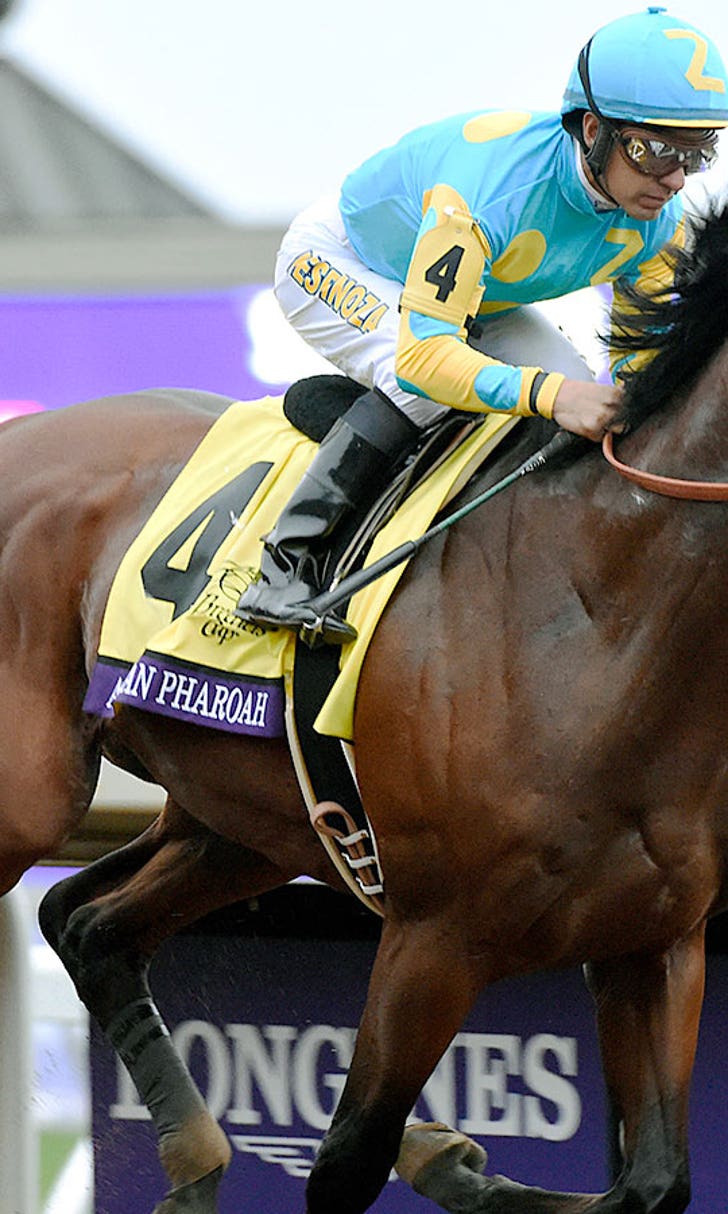 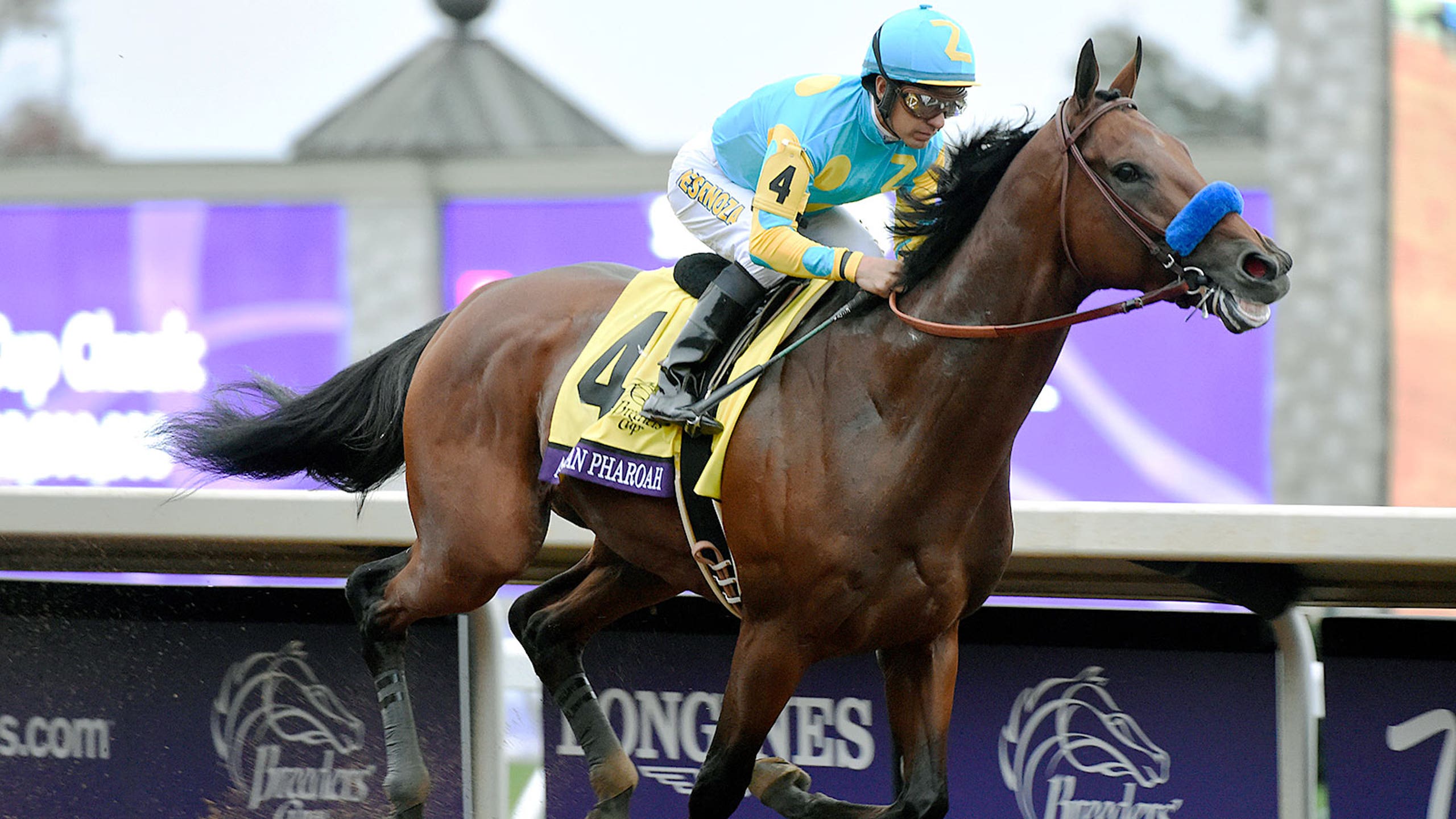 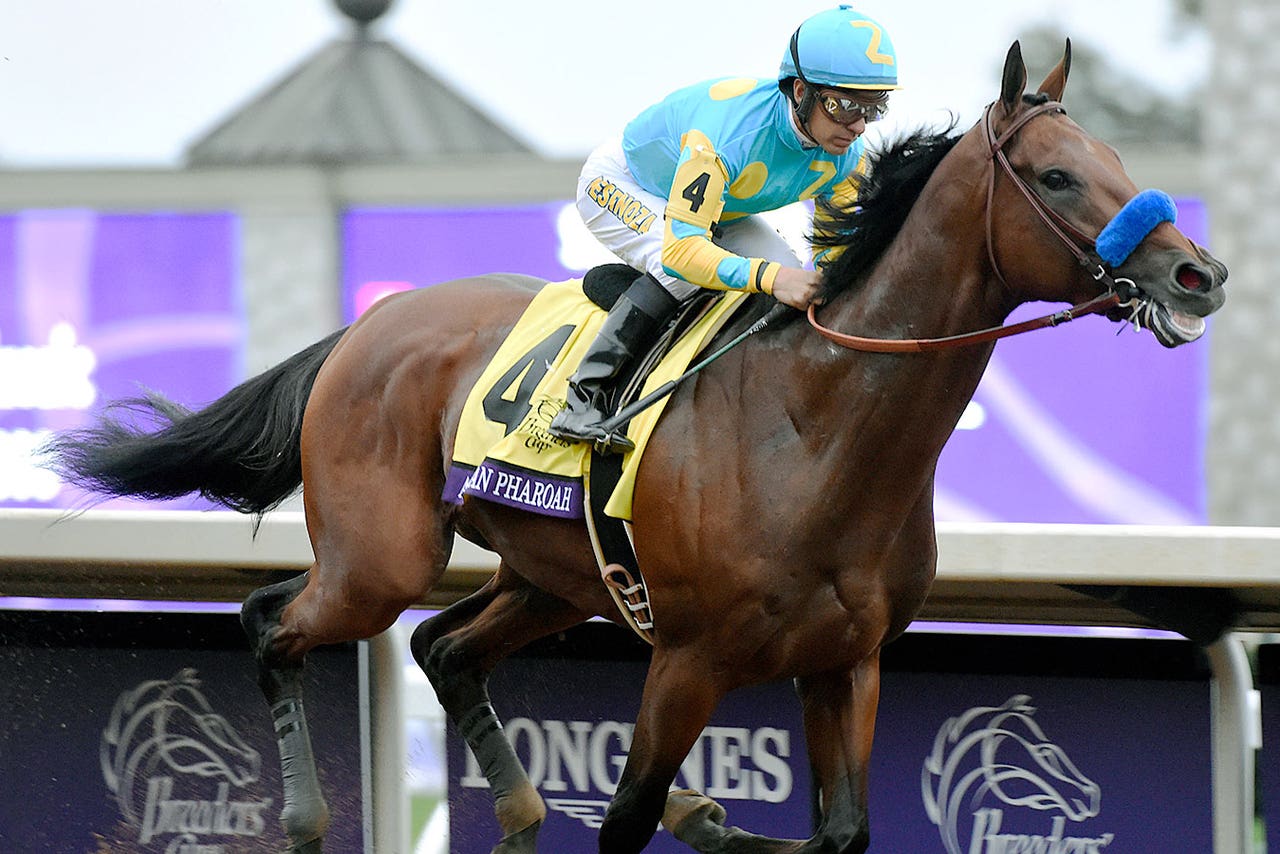 Triple Crown champion American Pharoah took charge out of the gate, winning the $5 million Breeders' Cup Classic by 6 1/2 lengths Saturday in his final race before retirement.

The 3-year-old colt ran 1 1/4 miles in a track-record 2:00.07 as the sentimental 3-5 favorite among the crowd of 50,155 at Keeneland. Fans stood 20-deep all along the rail, cheering and snapping cellphone photos of the superstar horse and jockey Victor Espinoza.

Except American Pharoah didn't hear them. He wears ear plugs to muffle any sounds that might startle him.

"This was for Pharoah," trainer Bob Baffert said. "We wanted him to go out the champion he is."

American Pharoah took on seven rivals after Smooth Roller and champion mare Beholder dropped out. Beholder had the speed and the class to potentially make the race a contest, but a lung ailment sidelined her on Thursday.

It probably didn't matter how many faced American Pharoah on a cloudy, cool day in the cradle of American horse country.

He smashed the old track record of 2:05.36 by more than five seconds.

"The winner is one of the most amazing things I've seen," said Irishman Aidan O'Brien, who trained last-place Gleneagles.

It was a feel-good moment for a sport that has been battered and bruised — all the troubles of declining attendance and drug controversies were wiped away in two magical minutes.

"It's a horse racing fairy tale and I just happen to be in it," Baffert said.

After easing across the finish line, Espinoza took the colt far up the first turn before slowly walking past the grandstand to the winner's circle, accompanied by raucous cheers all the way. The champion even had his own military escort walk him back to his barn.

The fans knew they had just witnessed history, the final chapter in a story that may never be repeated.

American Pharoah put an exclamation point on a brilliant career in which he lost just twice: in his debut and again in the Travers on Aug. 29.

Keen Ice, who vanquished him at Saratoga, finished fourth in the Classic. Tonalist, the 2014 Belmont winner, was fifth, followed by Hard Aces, Frosted and Ireland-bred Gleneagles.

Frosted unexpectedly pressed American Pharoah on the lead in the Travers, leaving him vulnerable to the rally by Keen Ice.

This time, no one could keep up with the champ.

American Pharoah won nine of his 11 career starts, including the first sweep of the Kentucky Derby, Preakness and Belmont in 37 years this spring. He earned a total of $8,650,300 for Ahmed Zayat, the Egyptian-born owner who chose to keep his popular horse in training so fans could see him run.

American Pharoah had already ensured his place in history by ending the Triple Crown drought. He won the Derby by a length, then easily handled a sloppy track in the Preakness to win by seven lengths. In the Belmont, he led all the way en route to a dominating 5 1/2-length victory.

After winning the Haskell Invitational in early August in Zayat's home state of New Jersey, American Pharoah took his show to upstate New York to run in the Travers. His loss by three-quarters of a length raised the question of whether he had peaked, and an emotional Zayat considered retiring him.

But the colt went back to his Southern California base with Baffert and regrouped. He quickly showed he was regaining his old form in training, in between entertaining visitors from children to Julia Roberts alike at his Santa Anita barn.

In a sport rife with jealousy, Baffert earned kudos from his rival trainers for how he handled the horse. Fellow Hall of Famer D. Wayne Lukas popped into the post-race news conference to congratulate Baffert.

"I knew he'd break their heart at the half-mile pole, and he did it," Lukas said. "You had him ready. On behalf of every trainer who gets up and tries to make a living, I want to congratulate you."

American Pharoah was a remarkable blend of exceptional talent and a winning personality. Unlike most high-strung, unpredictable thoroughbreds, he was friendly and patient with fans who wanted to pet and pose with him.

"The kindest, friendliest, happiest, easiest, most brilliant horse I've ever seen in my life," Zayat said. "He connected with people. He loves people. I knew he got it."

Next up for American Pharoah is a new career as a breeding stallion at a farm in Kentucky bluegrass country near Keeneland.

"It's going to be sad to see him go," Baffert said. "But I think he's done enough. He's proved enough."

Turning to his 10-year-old son Bode, the trainer said: "We're going to miss him, aren't we, buddy?"