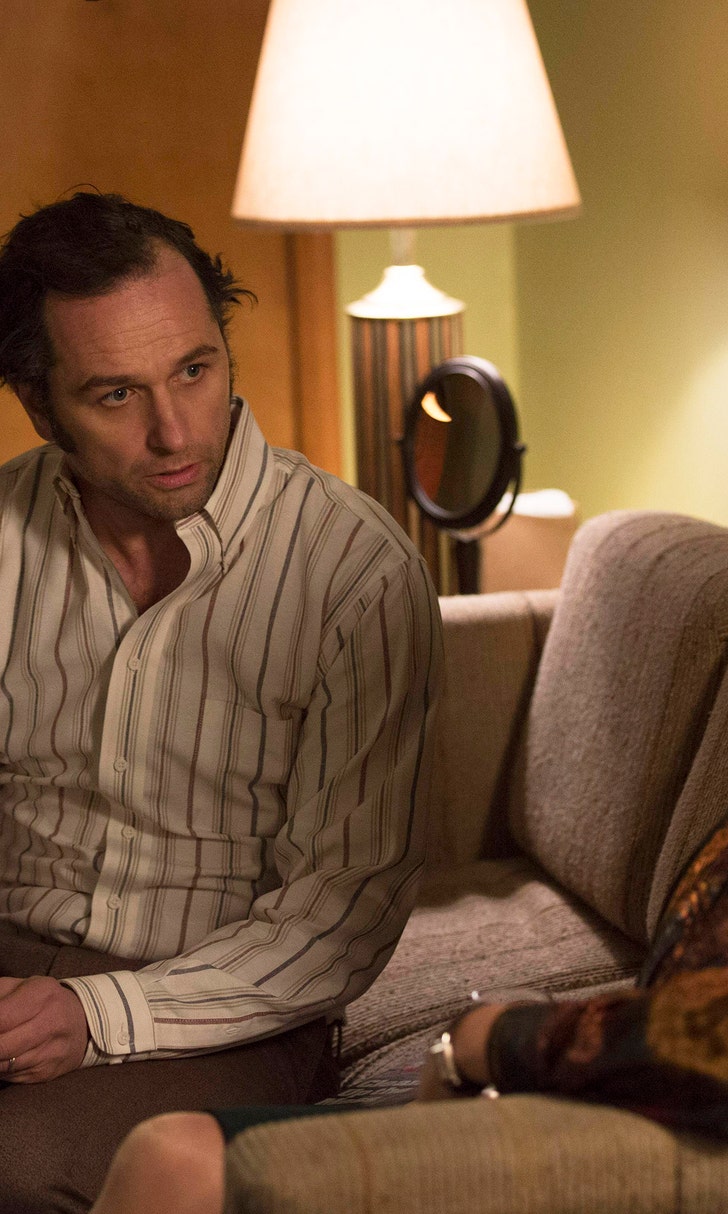 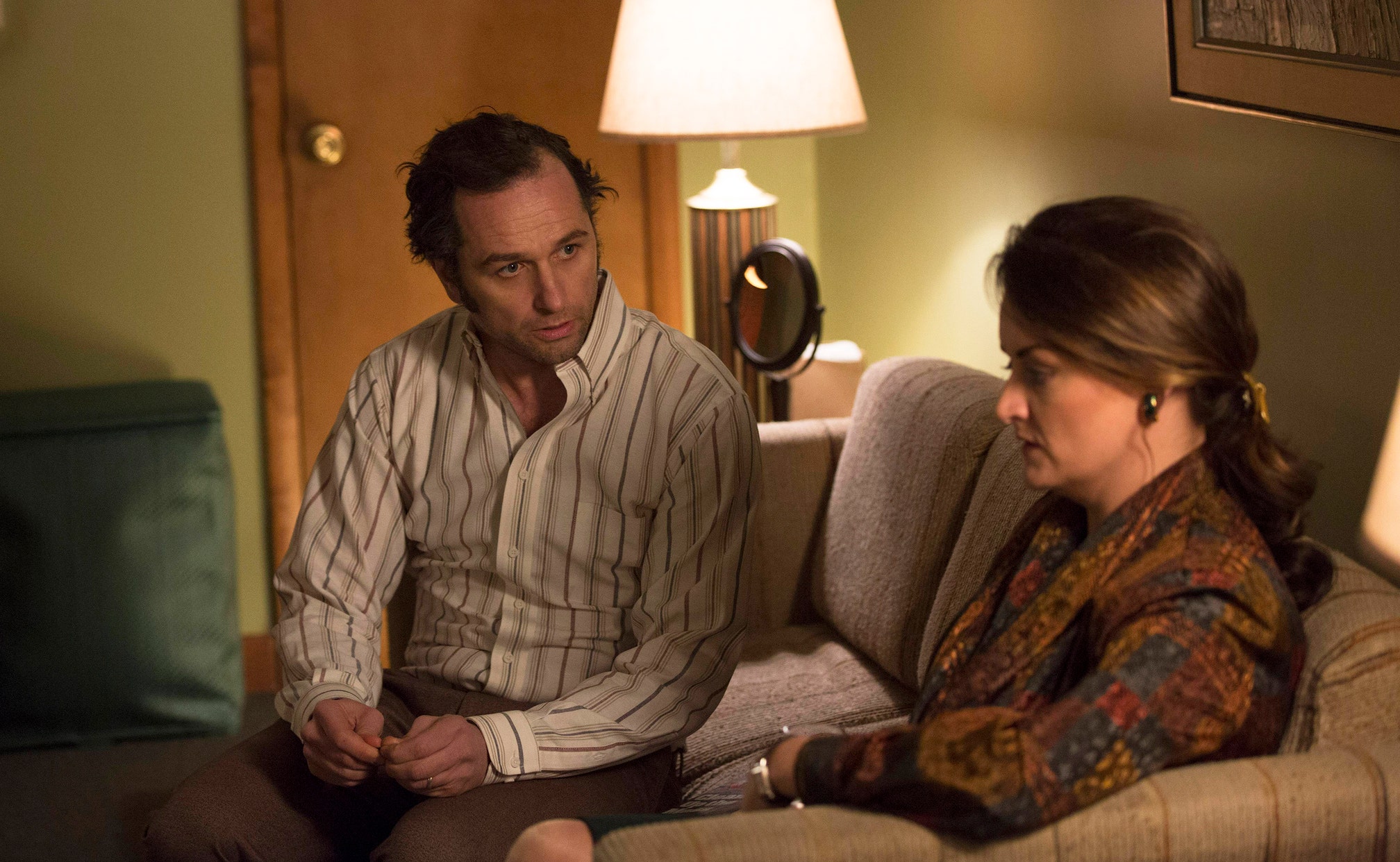 I can't live like this, Clark. I need to be able just to reach my husband. -- Martha Hanson

It seems like something is always coming to a head on The Americans, whether it's Philip and Elizabeth's cover, someone else's freedom, or as was the case tonight, an asset's survival as a character on the show. Following up last week's final minutes, where Nina Sergeevna Krilova was executed, tonight we returned to the long saga of Martha and Clark, which also may be nearing an end.

Usually, we save the music discussion for the end of a review, but this time around, Under Pressure was so well placed and so ultimately perfect for the conditions within the show, it's impossible to continue without referencing it and using it as the very baseline for a discussion. That last five minutes was tremendous, and it set the stage that leaves us all ready for next week's installment. (And of course I thought of David Bowie, and missed him all over again. Not that I ever stopped, but I digress...)

Virtually everyone on the show is currently facing some kind of hardship or a questionable decision. For Stan, he's dealing with a suspicion about Martha's motives and also, though it appears to be remedied, the Sandra-Philip relationship. And now, along with Oleg, we can add the loss of someone very important to both of them, as Nina is gone.

For Philip, the one thing we've increasingly learned about his fake life with Martha is he knows he's completely screwed this woman's life up. She's now on Valium, and she cries almost every time the two are within each other's orbit. Whether he's attracted to her or not has always been far less relevant than the sheer fact that he also knows she's a good person.

While she's an American -- and one working in an office that repulses the Russian side of his brain -- she's really just a lonely woman who reached out for love. And, with that desire, she may have sealed her fate. Perhaps it's just the end of Clark and Martha, but that doesn't jibe with what we've come to expect from this show when someone becomes immediately expendable to the larger goals of the Soviet Union's infiltration of Washington D.C. and the United States as a whole.

It's always been a very dramatic, very difficult portion of the show to watch, because Martha Hanson desperately wants what Clark could never offer her, for there is no Clark at all. She's constantly on a downward trajectory, as if she's walking down a never-ending staircase, leading her further and further away from a normal life. And, as you can see through Matthew Rhys' non-verbal acting throughout the episode, it's weighing on him because not only is he leading her down the staircase...

He built the staircase.

He creates every step, each of them full of lies, half-truths, and complete deceit. And, more and more, it feels quite possible that this woman may actually take her own life. It's possible that's not the case, but there's no way the sham life can continue, even if the Xerox copy issue falls by the wayside or Stan and Dennis buy the adultery excuse. She's got nowhere good to go. The only way the show can fathomably help her is for Clark to disappear into thin air, leaving her empty and alone, but with time to start over.

Meanwhile, Paige is beginning to ask more questions than her parents appear willing to answer, knowing that the more they tell her, the more dangerous her life becomes and the more secrets are in the hands of a confused young woman.

The meeting with Pastor Tim was interesting because of the El Salvador angle, attempting to frame their covert work as something entirely different from what their daughter told him in a moment of weakness. Whether he believed them is one question, but even if he does, if they don't believe he does, he and his wife both have to go. That still feels like the way this ends, but as it's slowed down and the show has given us a few other side plots to chew on, it may keep Kelly AuCoin's character on the show a little longer than some might have anticipated.

Paige, he needs to feel like you still trust him. -- Philip Jennings

Maybe we should take a break. Just so much has been thrown at you, and maybe it's too much. -- Elizabeth Jennings

Paige's new distrust of her spiritual mentor was a bit frustrating, if only because of the obvious hypocrisy of her being angry with him for breaching her trust after spilling her parents' dirty laundry to him in the first place. Perhaps, she's more upset with herself, which only enhances her rate of insomnia and late nights that result in startling her mother or creepily staring at a wall in the dark. Holly Taylor continues to do an excellent job with the role, but tonight I actually wanted a little less of her. Usually that's not the case, but I was so taken with the Martha angle, some of the other stuff felt less necessary.

Henry hung out with his figurative surrogate father and his actual son, playing Trivial Pursuit and coming on a little too strong. Elizabeth does ask a good question when she wonders aloud why it is that her son is spending so much time with an adult, rather than growing his relationships with kids his own age. The reality is, especially with Paige's situation becoming so prevalent, his parents don't have a ton of time for him. He's seeking what he doesn't really have, outside of a rare trip to a bowling alley.

It's sad, but it's accurate. There's nothing untoward from Stan and nothing untoward from Henry at all. These are two people that simply needed each other, even if it belies bigger concerns in their lives. Matthew almost acts like he's somewhat threatened, a bit shocked that Henry has taken up such a big spot in his father's life. However, he's polite and also might understand that the young Jennings boy needs attention and friendship. Now, he's about to see Rocky Horror, and I don't know if that's good for Henry or not. A young Susan Sarandon in a white bra is one of those scenes that cause a young man to grow up faster than he might be prepared to handle.

I only know what my father told me. -- Oleg Burov

One other moment that really stood out tonight was the silent glares of Stan and Oleg through the car window after the latter informs Beeman of Nina's death. While Joe Weisberg always said The Americans is, at its core, about a marriage, it's also about the purpose and ramifications of every choice. In that moment, we see two men on completely opposite sides beginning to think of what's actually right in a world where Nina could take a gunshot to the head. When Oleg is at his brother's funeral and grasps the clump of dirt, you can see he's grieving for more than one. And, when he informs Arkady, he's pulled together, but he's miserable.

That scene at the funeral made me wonder if Oleg has a little "John Wick after the dog dies" in him. However, this is The Americans. It's very unlikely that we see that kind of defection, but if ever the time was right for that kind of a shift, it would be in the wake of Nina's death. He certainly lashed out as his father upon hearing the news.

At the end of the hour, we're left to think of what's to come with Martha. Is she almost blown? Do Elizabeth and Philip now think she's blown, perhaps closer to that line of thinking after Stan introduces Philip to Dennis and they realize he's the one that asked Martha to dinner? If she's blown, what will the Centre order? Is Gabriel's optimism putting everyone in the grasp of more treachery? And, how many Valium would it take to kill her?

This isn't a show that ever brings with it tidings of joy. Not one of those questions is a fun one to think about in the context of the show's universe, but they're all indications of why The Americans is the best show on television. We have so many LOGICAL questions to ask. Our intelligence isn't insulted. We're brought along at the right pace, and our emotions are toyed with in masterful fashion.

That said, watching Elizabeth unable to hide her hatred of Ronald Reagan as she compared him to a clown as she watched his red cheeks on television was very funny. As hard as she tries, she can barely stand to hold her tongue when Reagan is on the screen, and this isn't the first time. But, we needed a laugh during the episode, and we got one.

We haven't quite reached the midway point of the season, but it's been an outstanding start, yet again, from arguably the most reliable series since Breaking Bad. Even Mad Men had a dud once a year or so. I can't recall the episode of The Americans that would fit that description. We're living in a time where the expectations for high-end television are off the charts, and The Americans continually sets the bar. That standard is so far past almost anything else in the genre, and it often requires Hans and Dennis on a street corner doing surveillance to even glimpse it.

Follow me @GuyNamedJason. I too know how to kill a party.