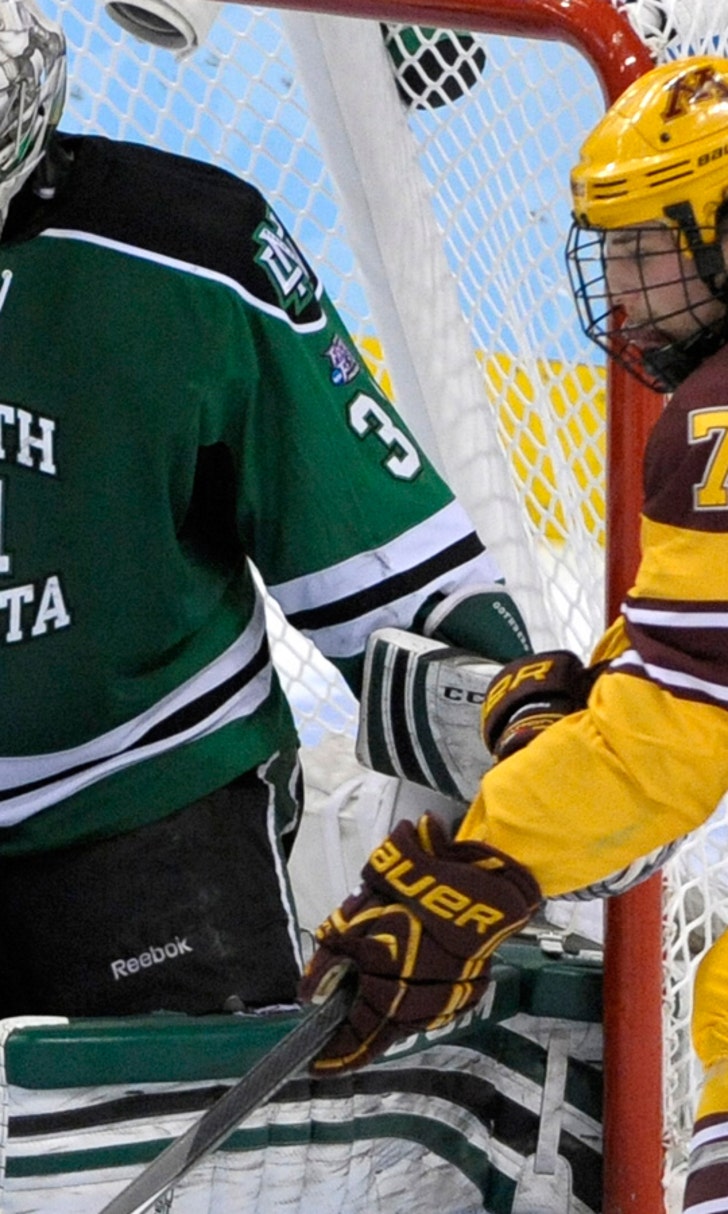 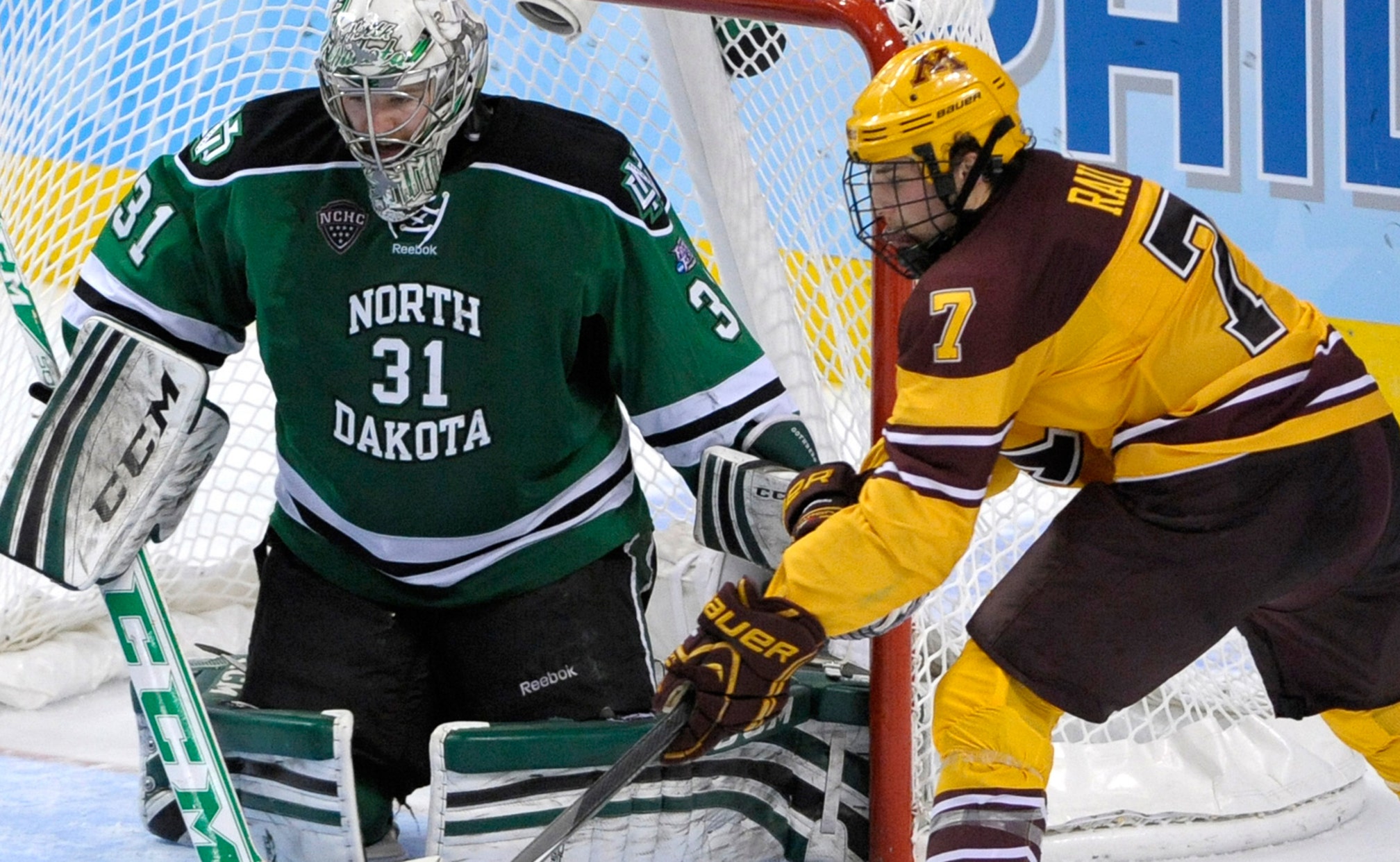 previous story
Mavs told not to go to Africa due to Ebola
next story
Arizona St. caps late comeback with Hail Mary, stuns No. 16 USC 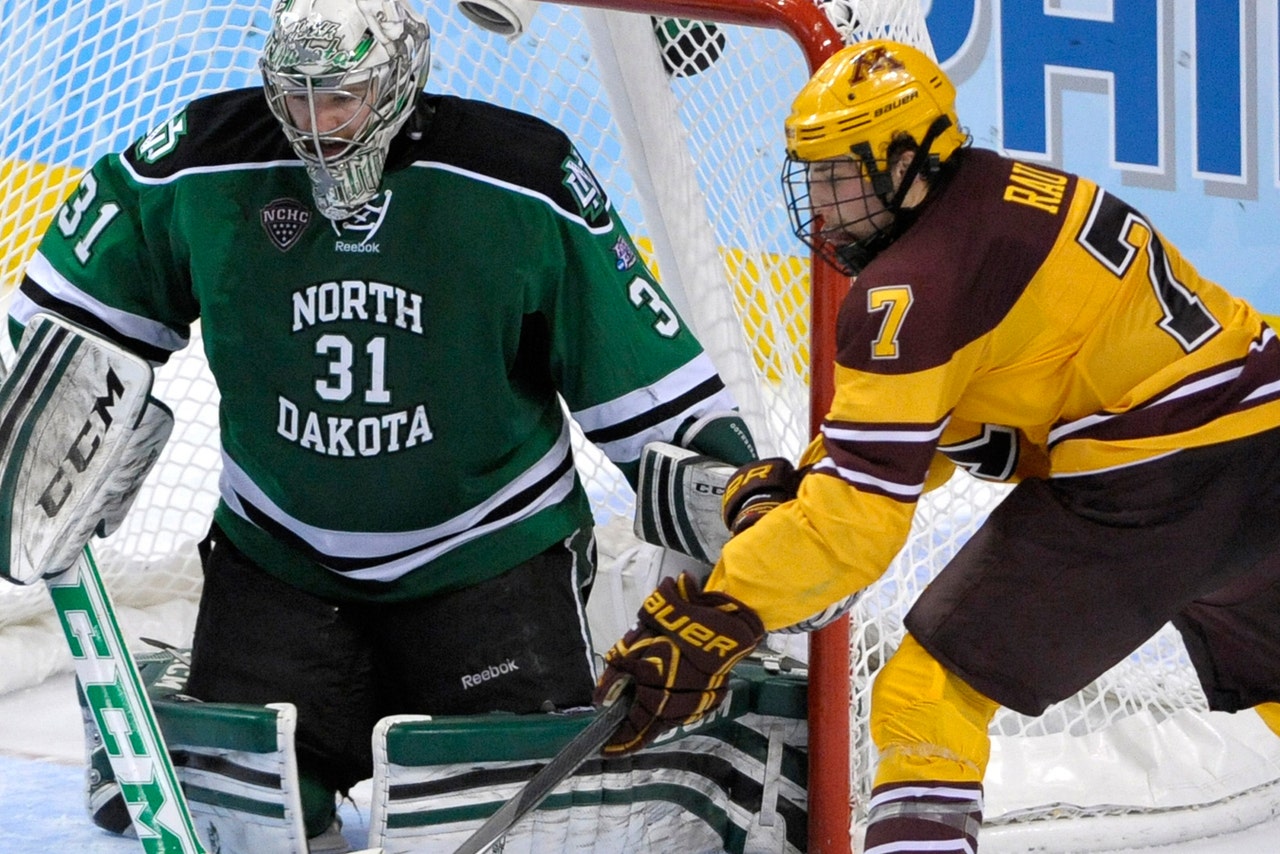 MINNEAPOLIS -- Every Monday when the Gophers show up for practice, coach Don Lucia shows them a goal chart from the previous weekend's games detailing where on the ice successful shots originated.

Some scores come from the point. Others from the faceoff circles. But the overwhelming majority of goals for the No. 1 team in the land come from smack-dab in front of the net, where Kyle Rau continues to chip, scrap and claw his way to a designation as Minnesota's top scorer.

He was the same old Kyle in a 5-0, exhibition rout of Northern Alberta Institute of Technology on Saturday night. The senior first-line center notched a pair of second-period goals by going to the dirty areas and helped the Gophers, ranked No. 1 in the USCHO.com and USA Today/Hockey Magazine polls, dispatch their Canadian opponent before a Mariucci Arena crowd of 8,991.

"That's what he does," Lucia said of Rau. "We need more guys to understand that if you're going to score goals at this level, it's not blowing it by the goalie from 40 or 50 feet. It's being around that five-foot area around the net."

Said teammate Travis Boyd, who notched a goal along with Jack Glover and Christian Isackson: "That's Rau's game. I think that's one of the reasons he's the captain of our team -- he does the hard work, he never takes it the easy way out."

The Eden Prairie product didn't always play with such ferocity near the crease, he said. Even during his time with Sioux Falls of the United States Hockey League, he could get away with a less feisty approach.

But since joining the Gophers, he's learned the value of favoring aggression over finesse.

"That's where all the goals are scored," said Rau, Minnesota's leading returning scorer with 14 goals and 26 assists during last year's national championship game run. "You just go there and see what happens."

Other than reaffirming Rau's grit, getting reigning Big Ten player and goalie of the year Adam Wilcox some early work and allowing Lucia to mix and match his lines frequently, Saturday night's preseason clash didn't afford much in the way of insight. After both the Canadian and American national anthems were played and fans checked their smart phones to decipher the definition of an "Ook" -- NAIT's mascot is named for an Inuit toy that resembles a snow owl -- the teams sloughed through a sluggish first period before Minnesota began assaulting the net.

"We were a little scrambled," Lucia said. "We've got to get the shinny hockey out of them."

Right wing Hudson Fasching and defenseman Jake Bischoff assisted on the first. Fasching corralled his own rebound and slipped the puck around sprawled-out NAIT netminder Kyle Birch to Rau, who shoved the puck into a wide-open net. With 21 seconds left in the period, left winger Connor Reilly tore up the right side of the ice and slapped a pass to Rau's stick tape in front of Birch; Rau tipped it between the Saskatchewan native's leg pads.

Wilcox showered off after the first period and finished with 12 saves. Junior Ryan Coyne had five in the second, and freshman Nick Lehr sealed up the shutout with seven stops in the final period.

"Coxie (Wilcox) was great as usual," Boyd said. "Nothing really new there, but I was really surprised and happy to see Coyner and Lehr get into the net and post shutouts, too."

Minnesota took a 1-0 lead on Glover's first collegiate marker with 9 minutes, 29 seconds left in the first. Justin Kloos carried into the zone and left a drop pass for Glover, which the Benilde-St. Margaret's product buried over Birch's left shoulder.

Isackson and Boyd accounted in the third period for the final tally. On the evening's prettiest play, Isackson threw a spinning backhand into the net's ceiling at the 13:55 mark. Less than 3 minutes later, Seth Ambroz found Boyd streaking toward the left side of the net and snuck him a perfect pass the center from Hopkins wristed home.

The Gophers had a handful of other quality chances, including shots from Steve Johnson in the first and Leon Bristedt in the third that rang off the pipe. NAIT outshot them 12-9 before the first intermission but finished with a 36-24 disadvantage.

Playing their sixth game already this season, the Ooks killed all four Gopher power plays but went scoreless on three man advantages of their own.

Lucia was able to dress four extra skaters and get a good look at some of his freshmen. But with about 90 percent of Minnesota's goals and 85 percent of its points coming back from last season, it's the veterans that will make or break a season that officially commences next Friday at the Icebreaker Tournament in South Bend, Ind, the coach said.

"They're not necessarily going to be put in that front-line role," Lucia said of the six freshmen who dressed Saturday. "We don't need that. We need to find some complementary guys that are going to fit."