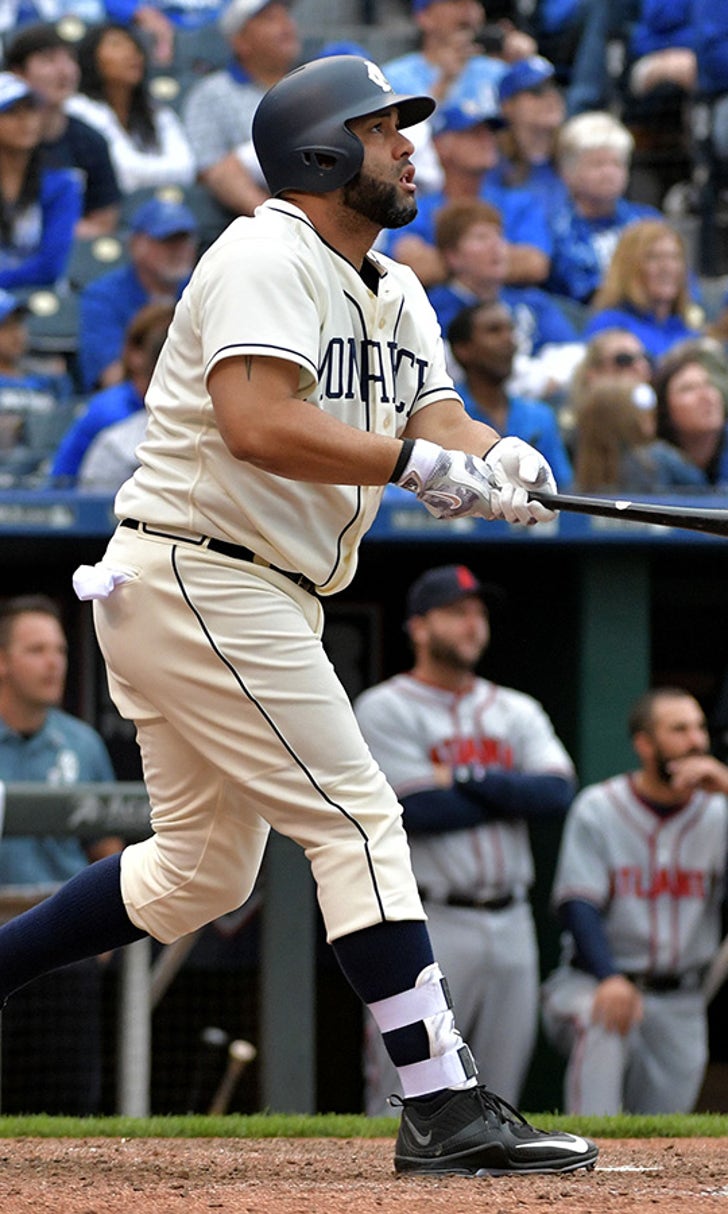 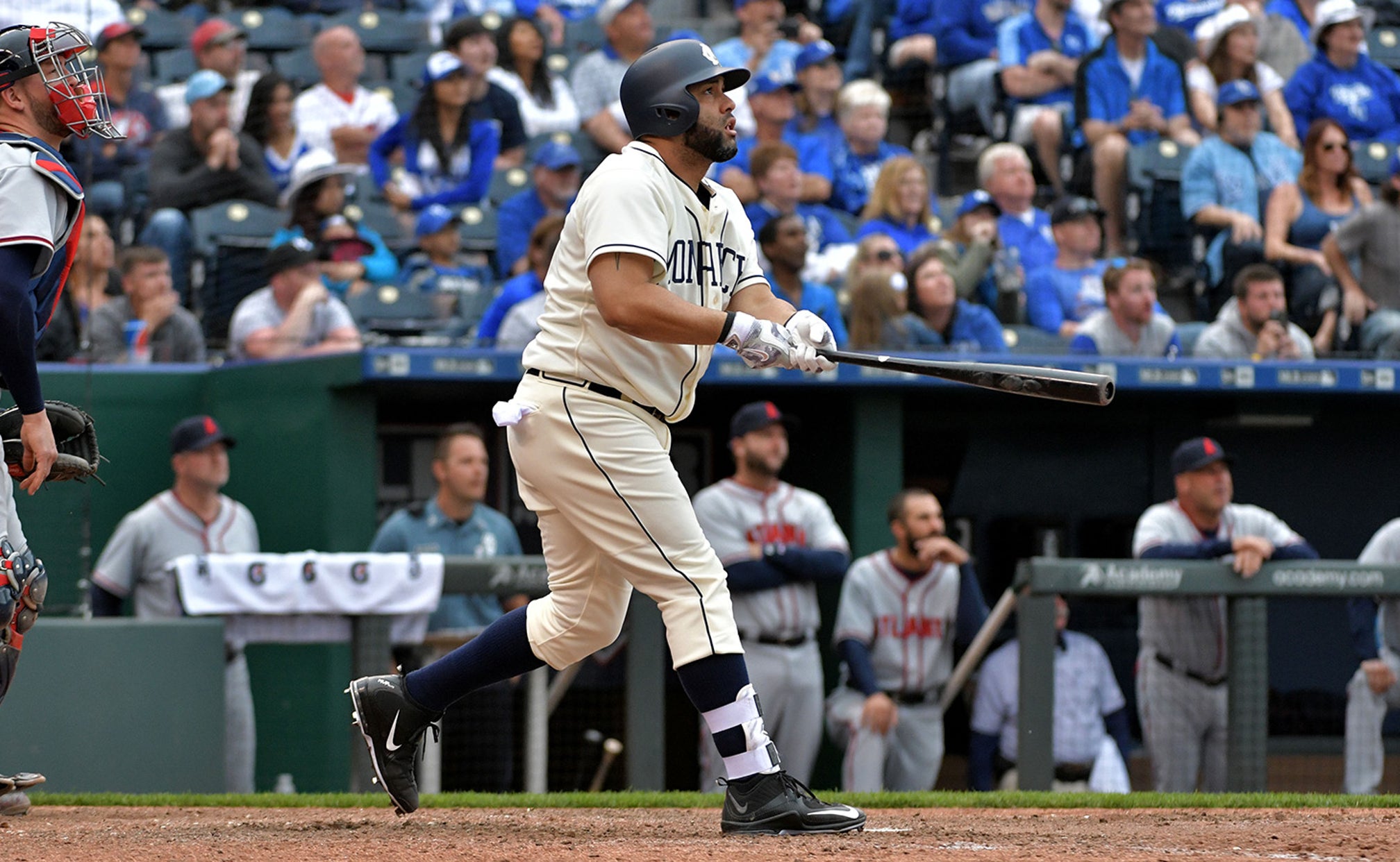 Morales' blast lets Royals walk it off, 4-2 over Braves in 13 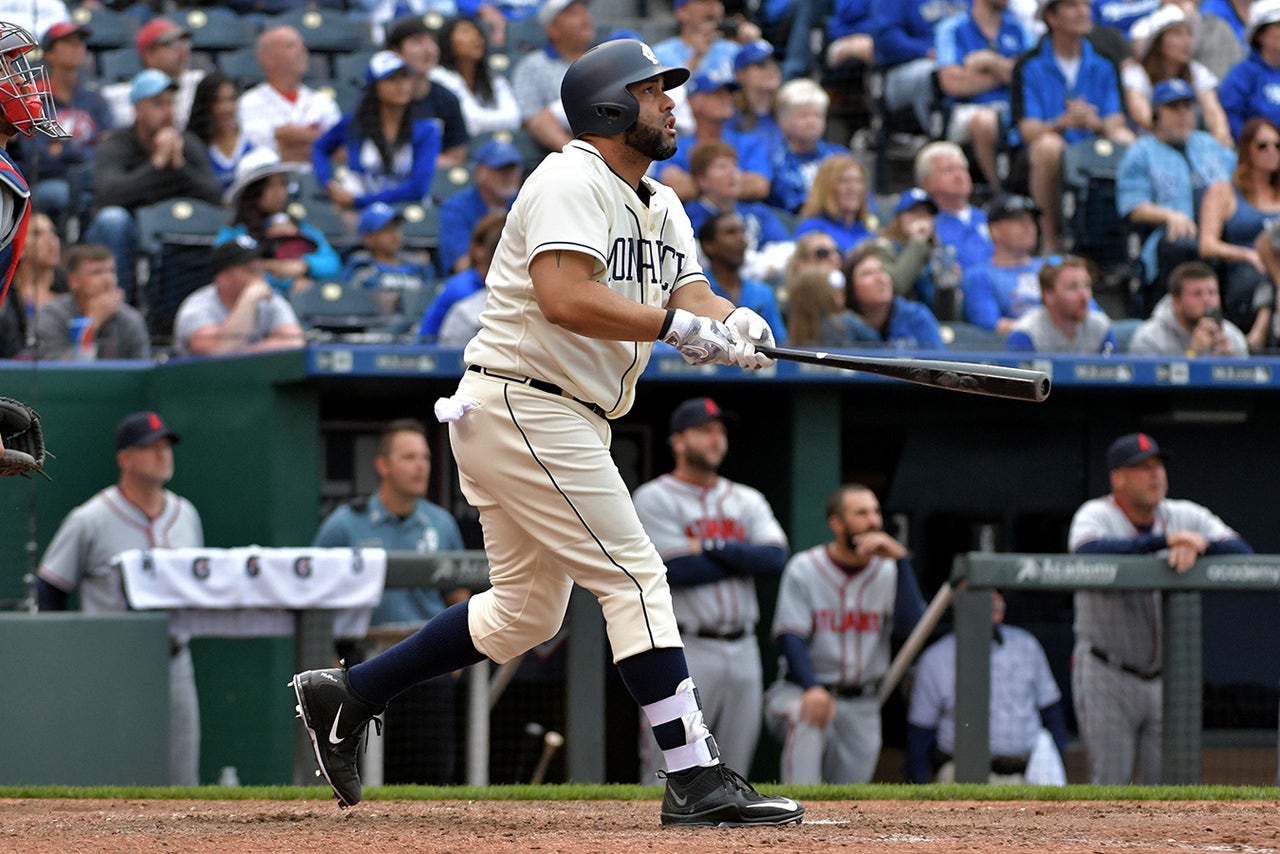 KANSAS CITY, Mo. -- Kendrys Morales has been struggling, especially against right-handers, but he came through huge Sunday.

Morales hit a game-ending, two-run homer with two out in the 13th inning and the Kansas City Royals overcame a rare blown save by Wade Davis to beat the Atlanta Braves 4-2.

Alcides Escobar, who had four hits to match his career high, singled before Morales' blast off right-hander Jason Grilli, who was brought in to induce the switch-hitting Morales to bat lefty. Morales was batting .143 with 21 strikeouts in 105 at-bats against righties but came through with his fifth home run on a full-count pitch.

"I'm real happy with the outcome," Morales said with catching coach Pedro Grifol acting as his interpreter. "We only needed one run, but thankfully, we got two."

Morales hit one to the right-center wall in the sixth that Jeff Francoeur caught.

"I thought the first one was gone and it didn't go," Morales said. "I thought I hit this one pretty good and I'm glad it got out."

The Royals took two of three from the last-place Braves after losing their five previous series. The Braves lost for the 18th time in 23 games and have won only one series this season.

"We've played well, other than this inning where they walked us off," Braves manager Fredi Gonzalez said. "We pitched well, we hit, we battled. We did a lot of good stuff and it's just a shame you walk out of here feeling pretty darn good, but your record, you lost two out of three."

The Royals used nine pitchers, tying a club record for one game, with Chien-Ming Wang (2-0) picking up the victory. Left-hander Eric O'Flaherty (0-3), the sixth of seven Braves pitchers, took the loss.

The Braves rallied to tie it with two runs in the ninth off Davis, who blew his first save since July 12 against Toronto, and was 8 for 8 in save situations this year.

Mallex Smith and Erick Aybar had run-producing singles off Davis. Ender Inciarte led off the inning with a single and then Davis walked Chase d'Arnaud.

"It was kind of a tough inning, but thankfully, the offense and Scotty picked us up," Davis said. "Everybody stepped up, but obviously, I didn't do my job."

Eric Hosmer, who is hitting .388 against right-handers, singled home Escobar in the Royals' first. Escobar led off the inning with a double.

Jarrod Dyson opened the eighth with a double and scored on Escobar's single to finish the afternoon for Braves starter Matt Wisler after 116 pitches. Wisler allowed two runs on eight hits, walked none and struck out seven.

"We could have cashed in in the ninth today, but they came back and battled," Wisler said. "Took me off the hook for it. We're not going to quit and hopefully we can start turning these into Ws."

Hosmer, who had doubled, was thrown out at the plate to end the Royals' sixth when he attempted to score on Salvador Perez's single to left.

Left-hander Danny Duffy, who replaced the injured Kris Medlen in the rotation and was making his first start, threw three innings, allowing one hit, struck out five and walked two before reaching his pitch limit. Duffy, who made 24 starts last season, began the season with 16 relief appearances.

Royals LF Alex Gordon hit second for the first time. He batted fifth 11 times and sixth 25 times in the first 36 games. Dyson made his second start in center as Lorenzo Cain, who had a nine-game hitting streak, got the day off.

Peter Moylan, who faced four batters, became the fourth Australian-born player to appear for the Royals. The others were Justin Huber (2005-07), Graeme Lloyd (2003) and Liam Hendriks (2014).

Royals: 3B Mike Moustakas (fractured left thumb) took flip swings in the indoor cage, his first step beyond dry swings since going on the disabled list May 5.