The formula of Silicon Valley is never likely to change, because it works. When you find something tenable that actually succeeds in its mission, there's a way to nurture those projects without screwing up the engine inside that vehicle. We will talk every week about the fall on your face mentality of this program, as that's the catalyst for the entire experiment.

This week, we saw Jack Barker exit, both Laurie Bream and Monica stand up and show that yes, there is a "fucking thing" they can do about quick cash grabs without any interest in the long term, and Gavin Belson acquire Endframe. Meanwhile, Richard and the Pied Piper crew were able to avoid termination for their Skunkworks failure, and in fact had several moments of optimism that were quickly squashed or altered.

That's what this show has become. It's not just one trip and fall; it's multiples, each week, and people getting back up without retying the laces of their shoes. On most occasions, the shoes are tied together, but they're the dopest J's on the street. The pacing makes each failing short-lived and thus, acceptable, as it can be hard to watch constant misery due to stupidity or other means. In this episode alone, Richard made the case for his platform, Erlich took Big Head to the cleaners, Gilfoyle found it impossible not to try and improve upon the speed of the box, Maleant pulled its offer and then brought it back, but with an insidious catch, and Hooli then bailed Pied Piper out with the 250 million dollar price tag for middle out compression.

Within each of these brief circumstances was some type of stumble down a flight of stairs, but with only flesh wounds remaining behind. Also, as Silicon Valley has moved away from the jokes as the cake itself to the laughs being the icing, it's continued to improve. I'm much more interested in the story, which makes each moment of humor that much sweeter to the taste. For example, while we're all watching each parcel of the plot unfold this week, Gilfoyle and Dinesh are still hurling a few insults at one another, Erlich vs. Fred is in full force, Jared is working on the rat problem, Gavin's mistreating a bulldog, and Belson's spiritual guide is dealing with parking in Lot D. Those sweet little nothings all still exist, but the narrative around them has become so much fun to watch, the entire show is far more satisfying.

But, with that said, Erlich Bachman's bong-coughing fit might be one of the funniest things I've seen in years. It went from normal to abnormal to irritating to wholly obnoxious to pure genius, because it never stopped. At no point was the gag out of its depth. It was naked from the waist down, and had no interest in rushing behind a curtain to hide the naughty bits. It was just damn funny, and at the same time Bachman still was able to get across the point (along with Jared) that Gavin Belson just saved the company's ass while attempting to screw Richard Hendricks. THAT, ladies and gentlemen, was a brilliant scene. It was one of T.J. Miller's best, which is a major compliment.

I'm not entirely convinced we've seen the end of Jack Barker, and as a Stephen Tobolowsky fan, that's just fine by me. He was a black, green, and red numbers guy, and as the CEO, that was what he was hired to do, within reason. Laurie is cut and dry as well, but she's also someone who does seem to care a little more about the artistic or intrinsic as opposed to focusing solely on the quantity of zeroes on a check. It was the right spot to jettison him from that role, because the decisions he was making were shortsighted and bore an enormous cost, like a five-year exclusivity deal with all leverage on the side of the client. It was about getting rich quickly for him, and he found himself in the minority.

And it's fitting to mention Groundhog Day, because within the world of Silicon Valley, the groundhog always sees his shadow, and we eternally relive the same day over and over again. Whether it's fraud or Limp Bizkit loving investors, every good choice Richard or his cohorts make will then be followed by an equal and opposite boneheaded move. It's the modus operandi of Judge, Krinsky, and Altschuler, or it is with this property.

So for the episode to end with a vacant CEO chair - not a return to Richard in control - it's another open-ended point that may not find even a temporary remedy until the end of the season. It's placement brings just a little more depth, a new question to answer, and it ensures Hendricks and the gang remain in an uncertain place. It won't be in a basement along with Pony Tail John, but it's a creaky floor. More than the repeated falls, the characters and their amorphous, shaky future might well be the show's real foundation. And considering the subject matter and the pace of that world, it might be more appropriate than many of us know. 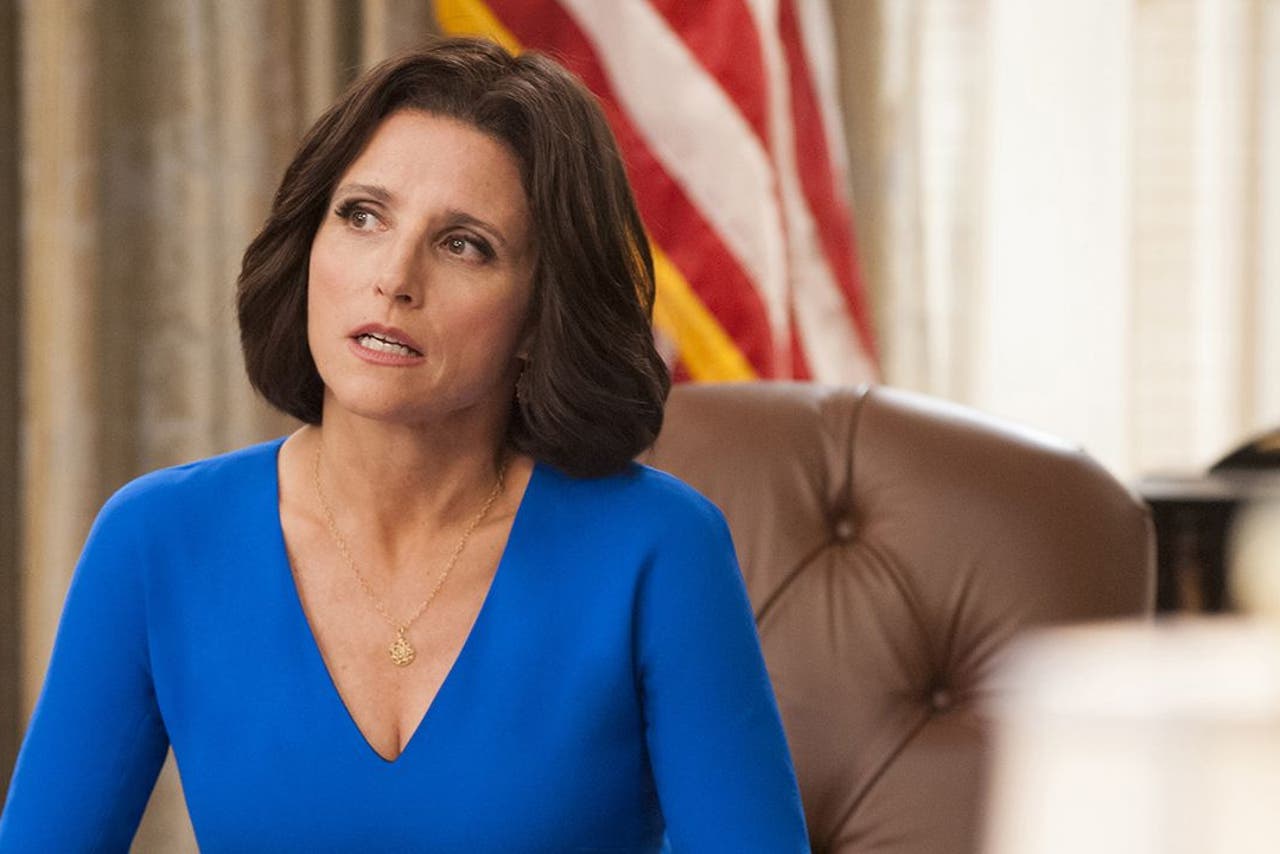 If there's a word that defines this week's Adventures of Selina Meyer, it's selfishness. While the POTUS has undeniably always been a less than sympathetic character, never before has her aura emanated quite this level of narcissism. At times, it was tough to tell whether Selina was able to feel anything for her mother at all, because her mind was on the Nevada recount. While that should have been the reality for Amy and Dan, Jonah and Richard, Ben and Kent, this was perhaps the episode of Veep that most indicated everyone's collective disgust, or at the very least cynicism, with politicians and the circles in which those individuals live.

I couldn't quite feel fully sorry for Selina's daughter, mainly because Catherine is such an irritating character, and it's by design. Her heart might be in the right place, but the way she stares and the facial expressions and the nagging nature of the daughter makes you laugh a little harder when the mother treats her like an extra in a big budget movie. However, when the two Meyer women were talking about "MeMaw," we got illumination into Selina, the oblivious asshole.

"You have no idea what it's like to be the only daughter of a pathological narcissist. I mean all this woman did was criticize me or ignore me."

It was a crafty little piece of dialogue, because it provided family context that grounded the story, while so much of the episode was otherwise spent preparing for the funeral scene and the reveal that Meyer had lost Nevada, and due to the recount and the new votes, had also lost the popular vote. But, on the way there, we saw Catherine listen to a description of herself from a mother who has never had the time or the lasting inclination to give a damn about her. It's not that Selina doesn't care AT ALL, but her emotion is always split between whatever situation she's in, and how that might affect her.

When Kent tells her of her mother's health complications leading to a bit of a bump in her favorables, she can't help but see the value in it, even while Catherine just finished sobbing uncontrollably (and hilariously) in the hallway. That weeping seemed out of place, because it was so over the top, but if you compare it to Erlich's coughing fit in Silicon Valley, it's easy to laugh at both.

If we didn't realize the recount and the newfound votes wouldn't end up breaking for O'Brien, we haven't been paying attention to this show for the last five seasons. Selina Meyer will never get it easy, but in most cases, she still finds a way to get it, even while it's being undercut right in front of her face.

The pseudo-protests from O'Brien and then "Totes the Votes" from Jonah and Richard kept our attention partially focused on the ground effort in Nevada, and we spent a few seconds with Furlong's speech and Charlie's appearance at the funeral. Other than that, this was an even heavier Selina episode than usual, which is what it should have been considering it was the lead-up to her DNR decision, which may also have doomed Mike and the perfect surrogate. We also did see Andrew showcase what a slimy individual he is, even though Monica has a hellacious eggnog recipe.

The timing of the Nevada news leading Selina to be believably sad and unable to complete her eulogy - giving in to Tim McGraw - was one of those spots where Veep as a show really understands how to get the right reaction for the fake constituents while the viewing audience is behind the scenes, fully aware of what bullcrap it actually is. Politics is nasty, but it's also full of gaffes, some larger than others, so it's a perfect landing spot for smart comedy. Perhaps mom's death caused a little emotion, but when the camera cuts to show Ben and Kent in the pews and Cafferty is tearing up, we know what's actually happening and why these people are upset.

Nevada goes to O'Brien, the popular vote goes to O'Brien, and so the fight moves to the Capitol. What that should mean is much more Roger Furlong, a ton of political maneuvering, and likely Tom James speaking out of both sides of his mouth as he works both for and against the top of his own ticket. And The Eagle, hopefully we'll just see a lot of The Eagle, especially after congratulating Selina during the closing credits.

We're one episode away from the midway point of Thrones, Silicon, and Veep. HBO during that ten weeks is absolutely on fire unlike any other network, even those with solid offerings. But it feels like we just got started and we're already 40 percent through the new season. Luckily we aren't wasting time. Veep was clever and subversive this week, really hitting a balance in the serious and the "Chinese ass play" jokes. The only difficulty I have writing the weekly review is there's just not much to criticize. This wasn't my favorite episode of the new season, but it was still good TV.

And the Tim McGraw tune was so painfully terrible to hear during that funeral, it was impossible not to bust out laughing, even while everyone on screen was crying. Had it been "Indian Outlaw," I might still be on the floor.

I'm @GuyNamedJason. I've also been compared to Lazarus and Rasputin.