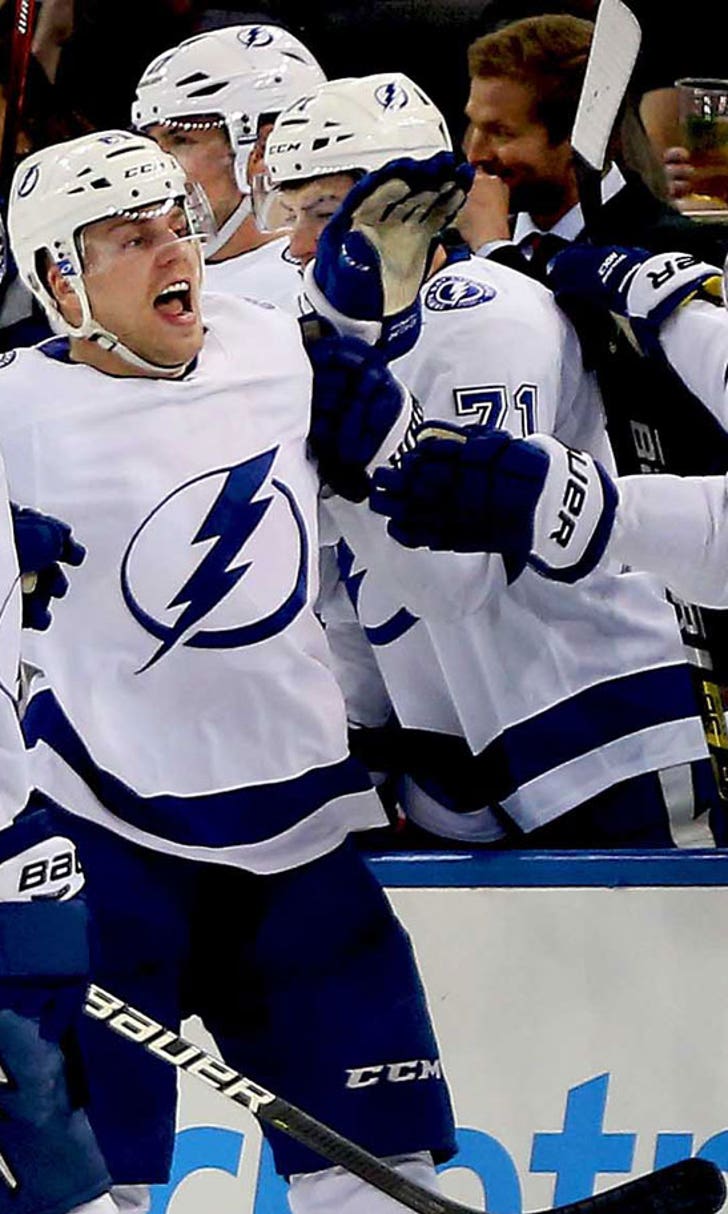 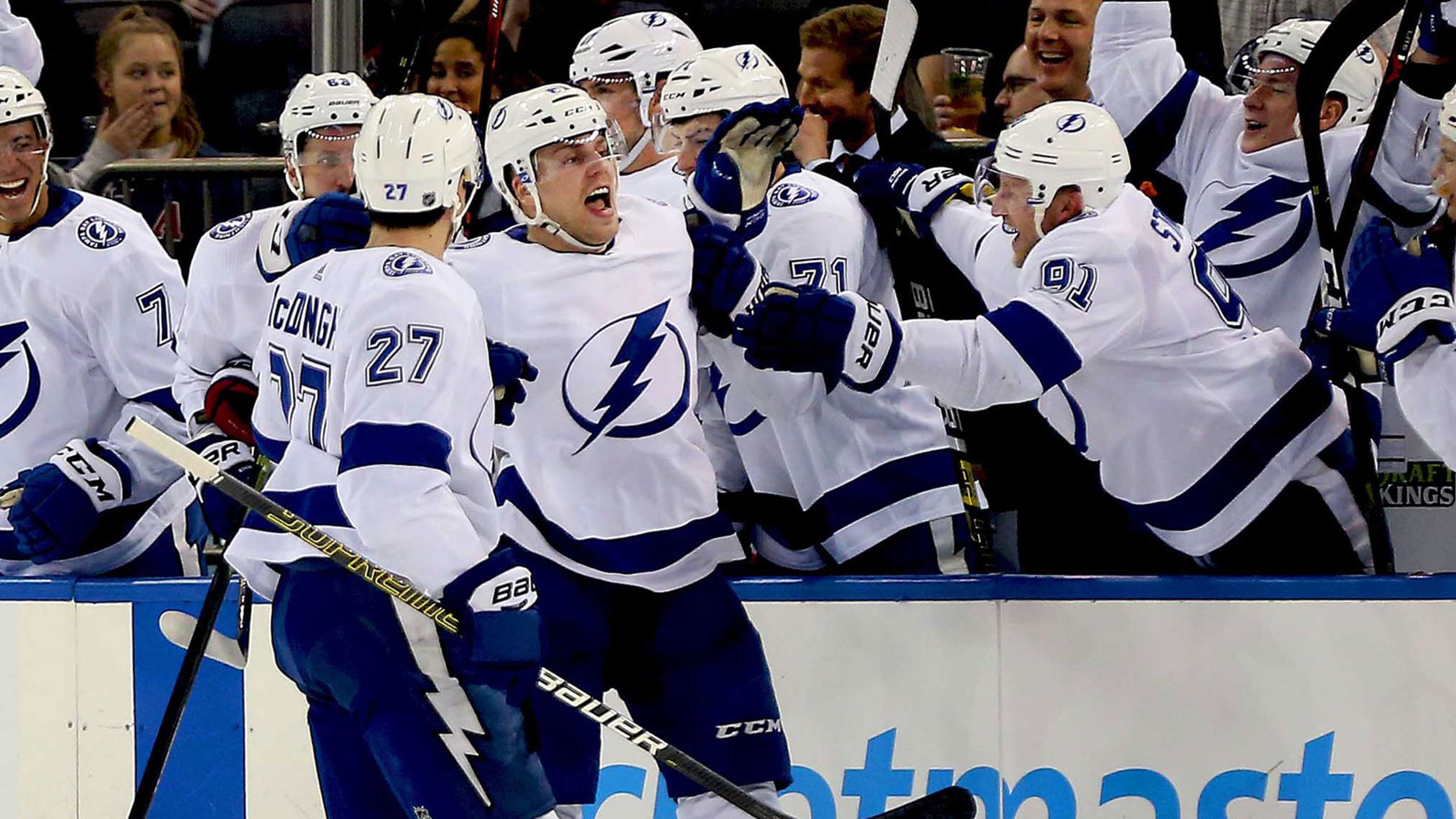 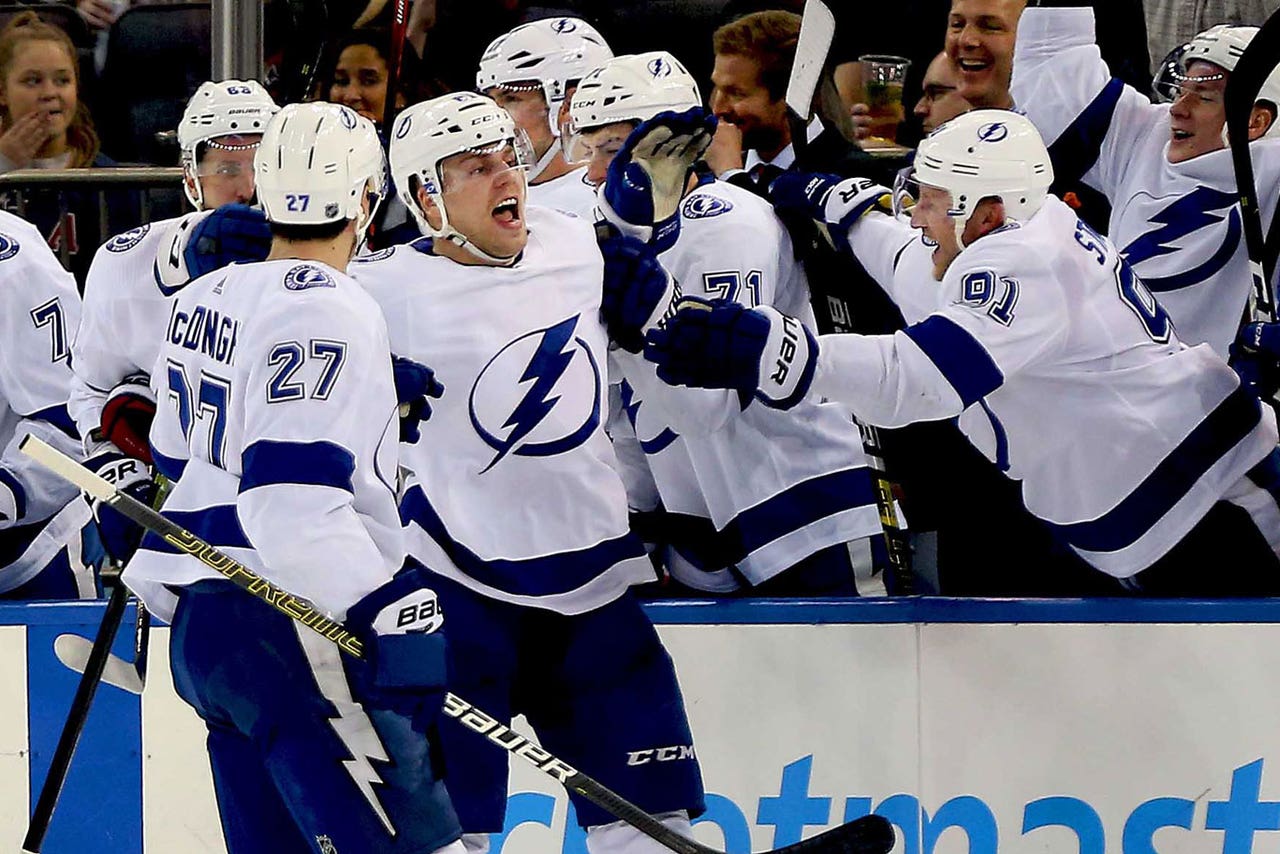 NEW YORK (AP) — The league-best Tampa Bay Lightning are finding different ways to get wins. They needed their goalie to cement their latest victory over the New York Rangers.

Steven Stamkos scored in the second period to give Tampa Bay a three-goal lead, Louis Domingue stopped 31 shots and the Lightning held on to beat the Rangers 3-2 Saturday night.

"We got in our groove after the first," said Domingue, who had 15 saves in the third period to improve to 17-4-0 this season. "Our forecheck has been awesome. We get some huge blocked shots and there you have it."

Domingue got the start after Andrei Vasilevskiy blanked the Islanders 1-0 in a shootout win on Friday night.

Yanni Gourde and Erik Cernak also scored to help the Lightning get their 39th win and become the first team to reach 80 points this season — 15 points ahead of second-place Toronto in the Atlantic Division.

"You want your team to get the lead, extend it and hold onto it," Lightning coach Jon Cooper said. "For the better part of this year, we've been able to do that."

Mats Zuccarello and Kevin Hayes had goals for the Rangers, and Mika Zibanejad had two assists. Henrik Lundqvist finished with 20 saves as New York lost for the second time in three games since the All-Star break.

The Rangers had a chance to tie it when former captain Ryan McDonagh took a tripping penalty with 5:51 left in the third, but they were unable to generate any shots on the ensuing power play. They also pulled Lundqvist for an extra skater with just over two minutes left to no avail.

Gourde opened the scoring at 6:51 of the first, tapping a loose puck past Lundqvist for his 13th. McDonagh — in his second game back at the Garden since he was traded to the Lightning late last season — had an assist on the goal.

Cernak, a 21-year-old defenseman from Slovakia, made it 2-0 with his first career goal at 4:41 of the second, rifling the puck past Lundqvist from the slot. Another former Rangers captain — Ryan Callahan — had an assist.

"It was a long time, 30 games, and it was great to score my first goal," said the 6-foot-4 Cernak, who was drafted by Los Angeles in 2015 and traded to the Lightning two years later. "Hopefully it's not my last one."

McDonagh and Callahan were among five former Rangers skating for the Lightning. The list also included defensemen Dan Girardi and Anton Stralman, and forward J.T. Miller.

Stamkos made it 3-0 with his 28th at 8:33 of the second period with assists to Victor Hedman and Nikita Kucherov, who leads the Lightning with 80 points.

Zuccarello — playing his 500th game for the Rangers and becoming the first player from Norway to reach that milestone — got the Rangers on the scoreboard with 3:43 left in the middle period with his ninth.

Hayes narrowed the deficit to 3-2 when he converted a cross-ice pass from Zibanejad at 6:49 of the third on a power play. After Zuccarello's pass went awry out of the Lightning zone, Lundqvist retrieved the puck and sent it up the ice to Zibanejad. It was the third assist this season for Lundqvist. The Swedish goalie made a dazzling save with six minutes left in the third, denying Callahan on a breakaway with a right pad save.

"We battled hard. We played a really good game," Zuccarello said. "But it's not enough. You've got to win hockey games and we didn't do it."

Domingue made eight saves in the first period, including two stops on Ryan Strome on a breakaway. Domingue stopped the original shot, the blocked Strome's rebound attempt. He also stopped Kreider from in close in the last minute of the third.

"Tonight you could say we deserved to win," Rangers coach David Quinn said. "But it's a result-driven business. You have to find ways to win."