The Coyotes are enjoying their last extended break of the season, going four days between Saturday's shutout win at Edmonton in Mike Smith's return to their next game on Thursday, at home against San Jose.

With the team on a two-game winning streak, it might not be the ideal time for a breather, but the break does give some extra healing time for defenseman and leading scorer Oliver Ekman-Larsson, who has missed the past three games with a shoulder injury.

"He's skating, and we'll see where he is on Wednesday," coach Dave Tippett told ArizonaCoyotes.com. "He's kind of day-to-day, but we'll be careful with him."

The Coyotes (30-32-7) are in 10th place in the West, eight points behind Minnesota for the conference's final postseason berth. They play six of their next seven at home before finishing up with five of their final six games on the road. There are no more head-to-head games with Minnesota or Colorado -- the two games they need to jump to reach the playoffs. Ten of the final 13 games are against teams that are currently in playoff position.

Other notes from the Coyotes' den:

Tippett said Smith and Louis Domingue would divide time in goal for the remaining 13 games of the season, but was short on specifics.

"Both of them will play going forward," Tippett said. "I think Louis has earned the right to continue to play. Mike, obviously, coming back and playing well, that's a good sign. We've got two goaltenders that we feel real comfortable with now.  We'll go game by game."

"I feel good about where my game is at, it's just the body is more the issue than my game itself," Smith said. "The aches and pains that go along with getting back into action I think will slowly decrease the more I get into the games."

"It's not my decision whether or not I play, but Mike played very well last game, he said. "I've been (Smith's) backup before. I know what it is, and I'll be ready when I get told to go." 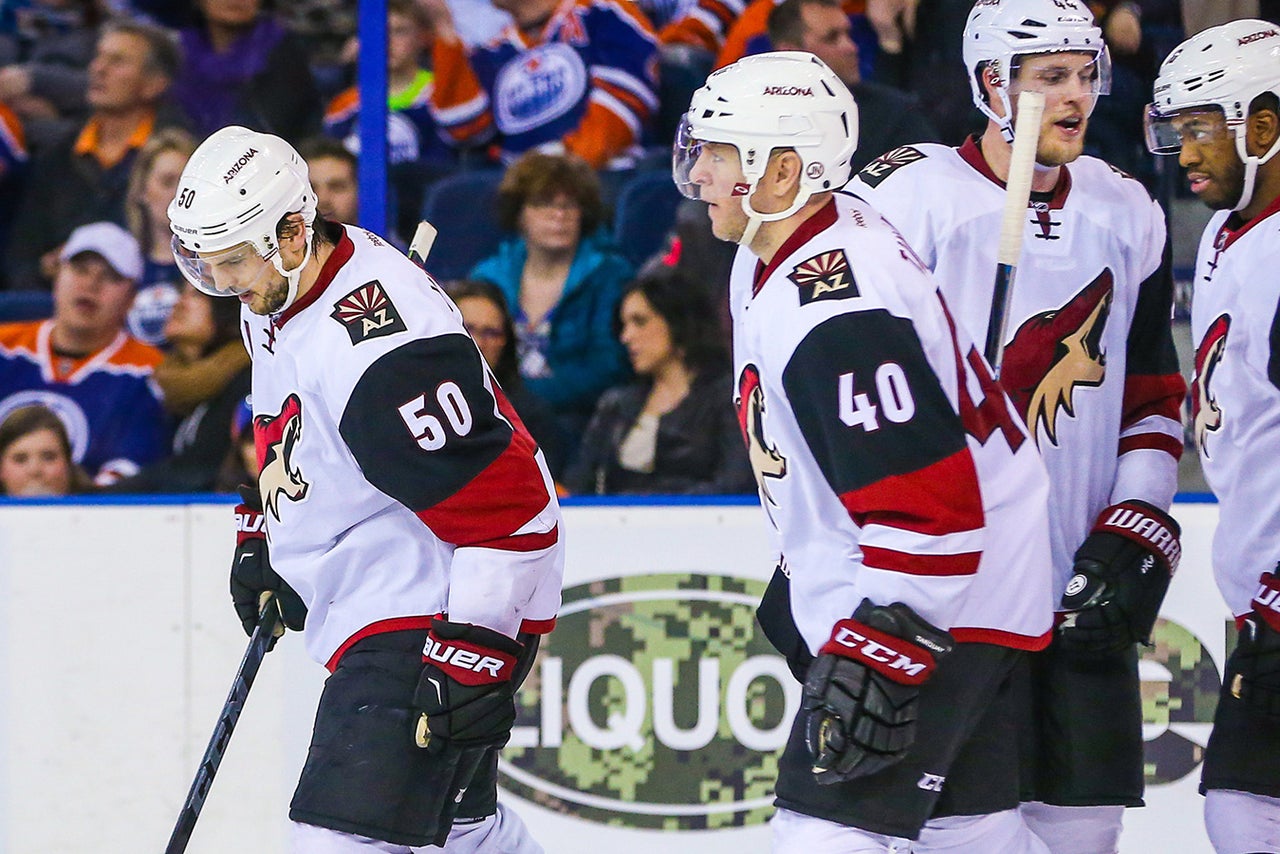 Antoine Vermette (left) has five goals and four assists in five games since being paired with Alex Tanguay and Anthony Duclair on the 'French Connection' line.

VERMETTE HEATING UP SINCE TANGUAY ACQUISITION

Center Antoine Vermette's midseason struggles coincided with the Coyotes' slide from playoff contention in the West, but Vermette has come on strong since being paired with Alex Tanguay and Anthony Duclair after Tanguay's Feb. 29 trade-deadline acquisition.

Vermette has had four goals and five assists in five games playing alongside Tanguay, who has three goals and three assists for the Coyotes.

"It's been a good chemistry," Vermette told ArizonaCoyotes.com. "It's nice to get into a stretch like this."

Vermette has 14 goals and 19 assists for the season.

Coyotes prospect Dylan Strome, picked third in last season's draft, was named hockey's No. 1 prospect in The Hockey News' Future Watch 2016 edition. Strome has 36 goals and 67 assists in 53 games for the Erie Sea Otters in the Ontario Hockey League.

Center Christian Dvorak, playing for the London Knights, leads the OHL with 51 goals in 56 games and ranks second in points with 118. Dvorak was a second-round pick of the Coyotes in 2014 and was named the No. 10 prospect in The Hockey News' annual rankings.

Dvorak was ranked fifth on the magazine's list of Top 10 rising prospects. Left wing Brendan Perlini, the team's No. 1 pick in 2014, is have a difficult season with the Niagara Ice Dogs in the OHL and was third on the list of falling prospects, but GM Don Maloney told Craig Morgan of todaysslapshot.com last month that the team continues to believe Perlini has a bright future.

"We still believe he has front-line NHL talent," Maloney said. "It's up to us to bring it out."