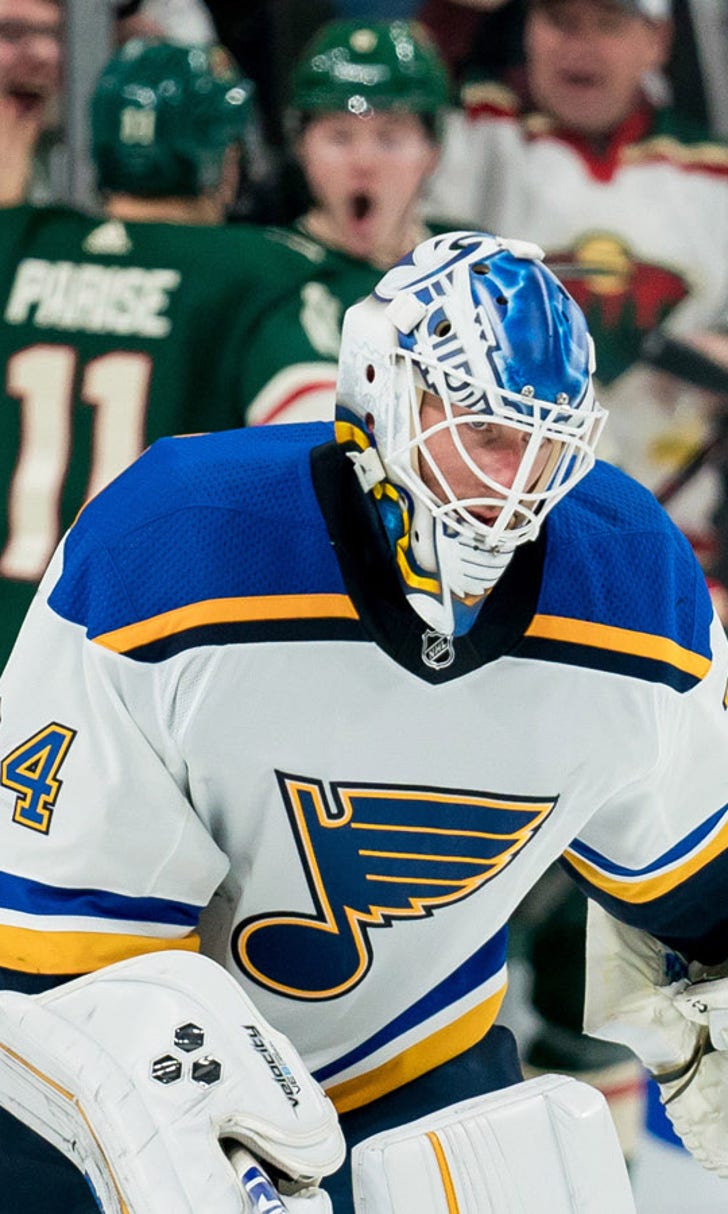 Blues fall 2-1 to Wild in overtime 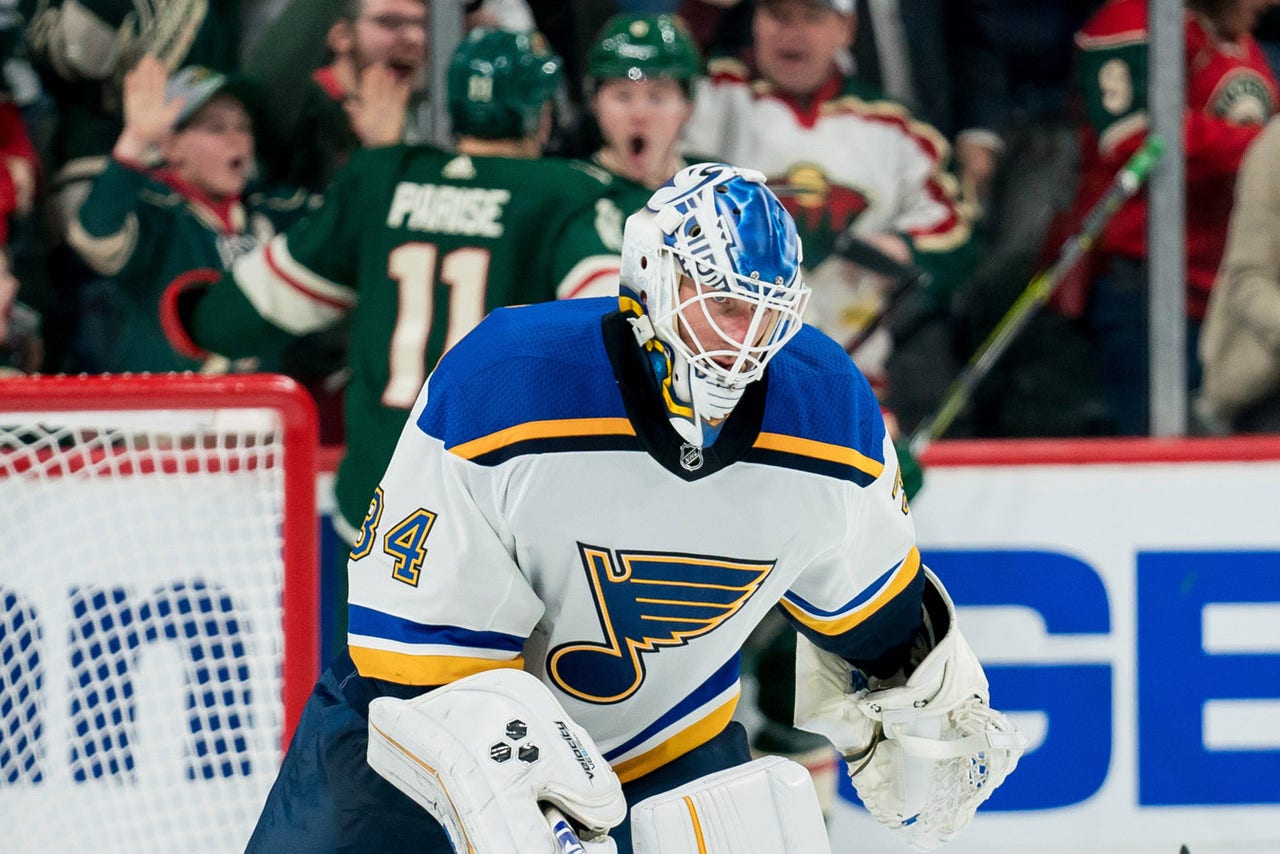 ST. PAUL, Minn. — Struggling to stay above the cut for the playoffs, the Minnesota Wild have already seen two key forwards dealt over the last six weeks.

With a boost from their most recent acquisition, the Wild might have staved off a teardown with this surge toward the NHL's trade deadline.

Ryan Donato scored with 2:31 left in overtime to lead the Wild past the St. Louis Blues 2-1 on Sunday night for their third straight victory.

"There's a lot of good guys on this team, and they're all pushing to get a win," said Donato, who came from Boston in the swap for Charlie Coyle. "It's been a pretty tough road for them in the last couple weeks. I think it was definitely huge for us to get these three wins, and hopefully we can stay hot."

Alex Pietrangelo scored on a power play in the third period and Allen made 33 saves for the Blues, who lost for just the second time in their last 14 games after beating the Bruins in a six-round shootout on the road on Saturday night.

The 22-year-old Donato, who has four points in three games since he arrived, launched his shot from behind the left circle to beat Blues goalie Jake Allen's glove for the winner . The son of 13-year NHL veteran Ted Donato was pleasantly surprised to see coach Bruce Boudreau send him out for duty in the 3-on-3 overtime.

"It's been pretty hectic, but these are experiences that you'll remember, so I'm really happy about that," Donato said. "And thank you to him for having the confidence to put me out there."

Jason Zucker had the first goal, Jonas Brodin had two assists and Devan Dubnyk stopped 27 shots for the Wild, who took three of four games from the Blues in the season series with the only loss a 4-0 decision here one week ago. The Wild have gone one series and done in each of Boudreau's first two years with the team and failed to advance past the second round during their streak of six straight postseason appearances, prompting speculation that new general manager Paul Fenton would continue to dismantle the roster after dealing Nino Niederreiter and then Coyle.

The Wild, though, passed Colorado to retake eighth place in the Western Conference. The Wild have played one more game than the Avalanche.

"Our guys didn't play like they were worried about the trade deadline today," Boudreau said. "They played like they want to make the playoffs."

The Blues, who are 26-15-2 since Craig Berube replaced the fired Mike Yeo as coach, have not only sped past the wild card line but begun to threaten Nashville for second place in the Central Division that comes with home-ice advantage in the first round of the playoffs. The Blues have played two fewer games than the Predators and trail them by five points, so the only action they'll be involved in before the Monday afternoon deadline would likely be to add another piece.

"I think we deserve a chance to go at it, and I'm sure they feel the same way," Allen said, nodding to the front office.

The Blues played past regulation for the third time in four games. They've played 12 times in 20 days.

"We've done a good job managing our rest here. Back-to-backs are always tough," Pietrangelo said. "You've just got to find a way to grind them out."

Eric Staal set up Zucker for his 15th goal, with 8:18 remaining in the second period to end a scoreless streak by the Wild at home at a whopping 187 minutes and 42 seconds. They were shut out here by the Blues a week ago and by Anaheim on Tuesday. Zucker, who was second on the team last season with a career-high 33 goals, scored for just the second time in 18 games.

The Blues picked up the pace after falling behind, though, and 7:26 into the third period they tied it with the man advantage following Ryan Suter's tripping penalty on Vladimir Tarasenko. With 41 seconds left on Suter's sentence to the box, Pietrangelo let a slap shot rip through traffic that grazed Wild center Joel Eriksson Ek's shin guard and past Dubnyk. The Blues had a 16-0 shots advantage after Zucker's goal through Pietrangelo's score.

"It was a big point, for sure. I thought we battled hard, the second half of the game especially," Berube said, adding: "They're a desperate team over there."

NOTES: The Blues have scored four power-play goals in four games against the Wild this season. ... Tarasenko, who assisted on Pietrangelo's goal, has 34 points in 36 career games against the Wild including the playoffs. ... The Wild have allowed a power-play goal in eight straight games, with 10 allowed in 30 chances. ... Wild RW Pontus Aberg did not return to action after playing 5:30 in the first period due to an illness.