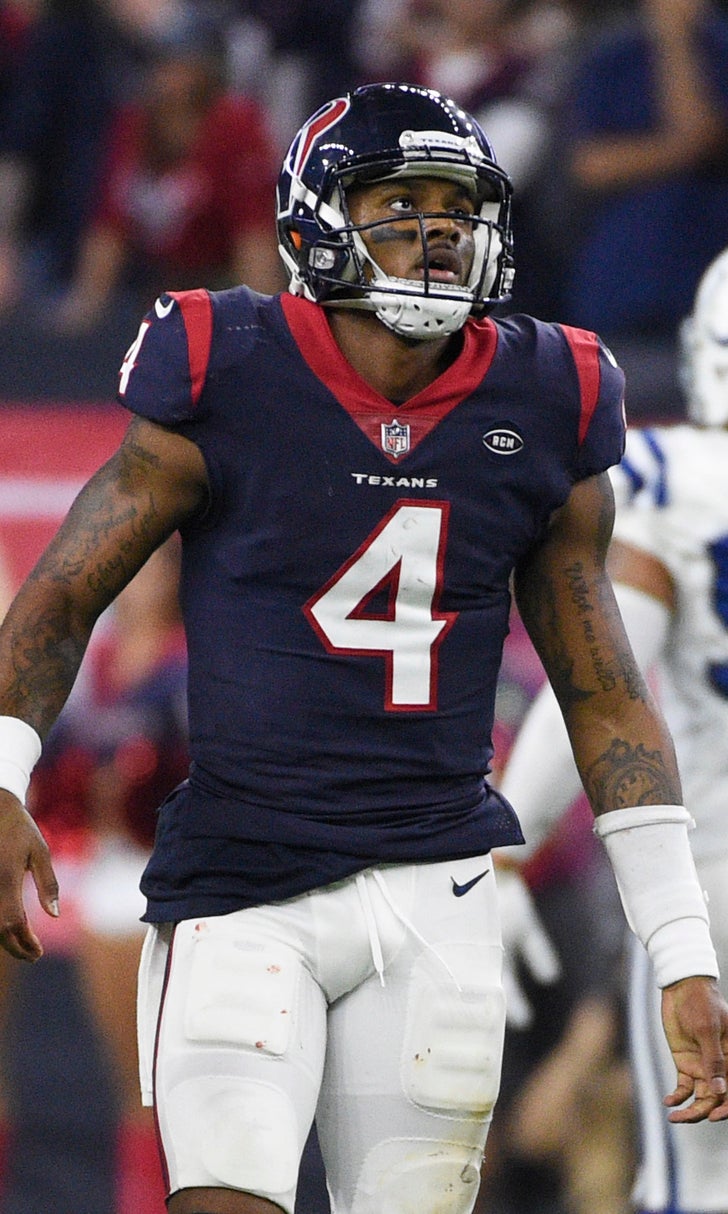 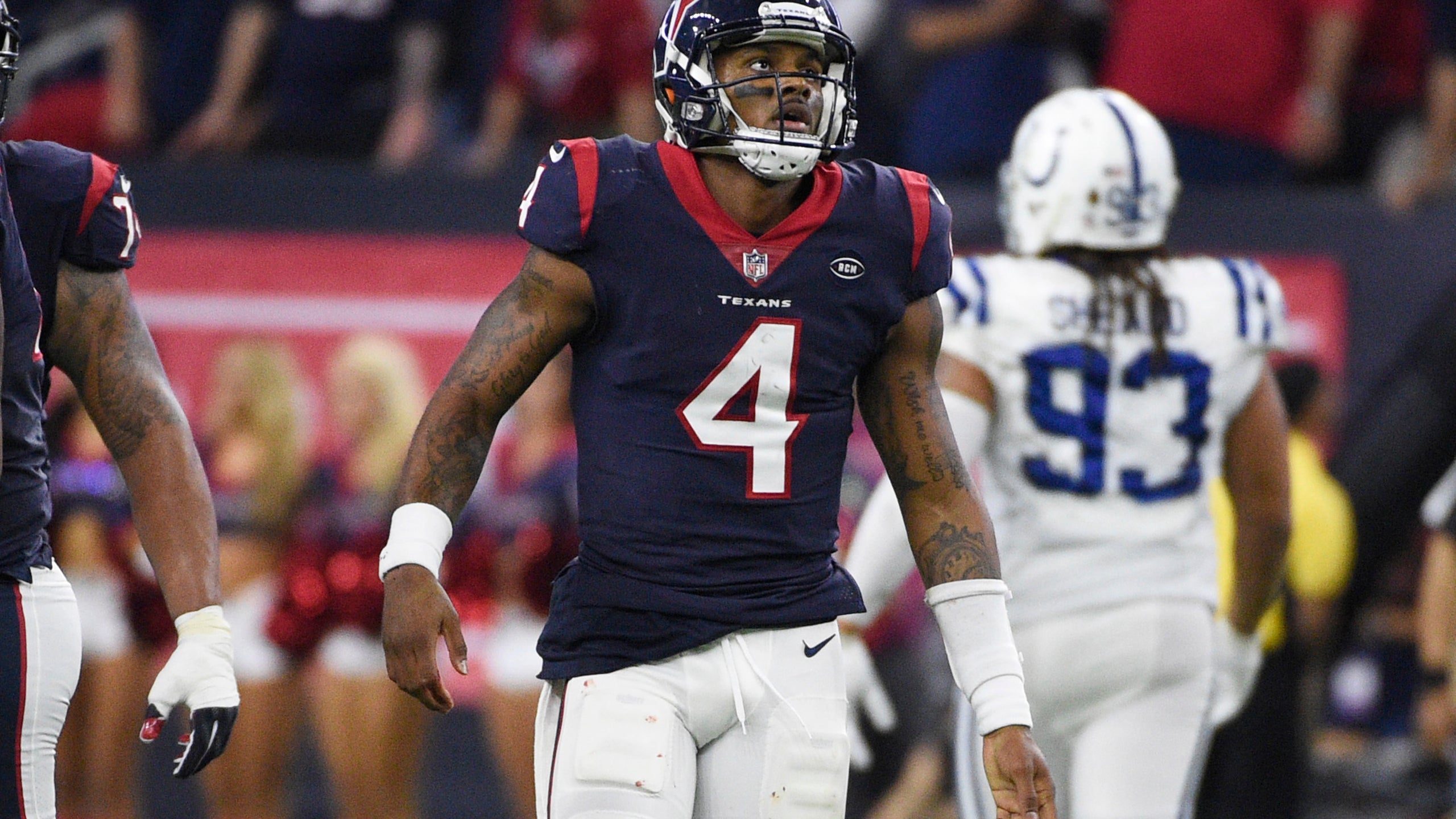 Texans look to bright future with Watson after playoff exit

HOUSTON (AP) — Houston's impressive turnaround after a 0-3 start ended in disappointment with a loss to the Indianapolis Colts in the wild-card round.

Still, the Texans remain optimistic about their future because they're confident they've finally found their franchise quarterback in Deshaun Watson after years of misfires at the position.

Watson's play has been a revelation for a team that has started 11 different quarterbacks since 2011. The 12th overall pick in the 2017 draft started each game this season after he was limited to just seven games as a rookie after tearing a knee ligament in practice.

He was disappointed that he was unable to move the offense effectively on Saturday, but is looking forward to what this team can do next year and beyond.

While the Texans know they'll have Watson for the next few seasons, they have a big decision to make on the other side of the ball with defensive end Jadeveon Clowney becoming a free agent. The top overall pick in the 2014 draft shook off injuries that plagued the early part of his career to make the Pro Bowl in each of the past three seasons.

Clowney joined J.J. Watt to form one of the league's most fearsome pass rushing duos this season and he had nine sacks after having a career-high 9½ last season.

O'Brien wouldn't say what their plans for Clowney are, but he had plenty to say about his development as a player.

"I think very highly of him," O'Brien said. "I think he's a disruptive player ... when he feels good, health-wise, and he's ready to rock and roll, he's hard to handle. Him in combination with J.J. and the other guys, it's a tough front."

If the Texans can't or don't want to work out a long-term deal with Clowney they could use the franchise tag to keep him in Houston for one more season. Clowney said he hasn't thought much about free agency, but that he'd like to remain with the Texans.

"We were a lot better than what we played (Saturday)," he said. "Of course I want to come back and show everybody that with this team. But that's up to them."

Along with getting Watson back after a season-ending injury, the Texans also received a boost from the return of Watt after he'd played just eight games over the previous two seasons because of injuries.

The three-time NFL Defensive Player of the Year earned All-Pro honors in a season when he had 61 tackles, led the AFC with 16 sacks, had 25 quarterback hits, 18 tackles for losses and forced a career-high seven fumbles, which tied for the most in the NFL. It's his fourth season with at least 15 sacks, which ranks second in NFL history behind Hall of Famer Reggie White, who had five.

"The last two years all I wanted to do was just play," he said. "I just wanted to play and not even necessarily at the highest level. I just wanted to play. Now it's exciting to be back where I'm playing at a very high level and I say: 'OK I don't want to just play. I want to be dominant and great and the best.'"

Also on Sunday, receiver Demaryius Thomas spoke to reporters for the first time since a season-ending Achilles tendon injury on Dec. 23. Thomas was traded from Denver in October after Will Fuller tore a knee ligament.

The four-time Pro Bowler has one year remaining on a five-year, $70 million contract signed in 2015 and it's unclear if the Texans will want to keep him on the roster with such a high salary.

"That's a tough injury," O'Brien said. "He knows that. He's (over) 30 years old. That's not easy to come back from, but he's going to work hard. He wants to play again. He made that statement to me, and we'll see how it goes moving forward."

The Texans are also looking ahead to this year's draft where they'll have three picks in the top two rounds after not having a draft pick until the third round last year because they shipped their top two picks away to get rid of Brock Osweiler and trade up to get Watson in 2017.

But O'Brien said he'd need a little time before he starts thinking about the future after how his team's season ended on Saturday.

"I'm not trying to overstate this (but) I felt terrible about (Saturday) that I couldn't get that team to play better than they did," he said. "That's something that will stick with me for a long time, and I've got to figure that out. But definitely, at some point in time pretty soon here I'll get a second wind and get excited about helping (general manager) Brian (Gaine) (with) ... the draft."