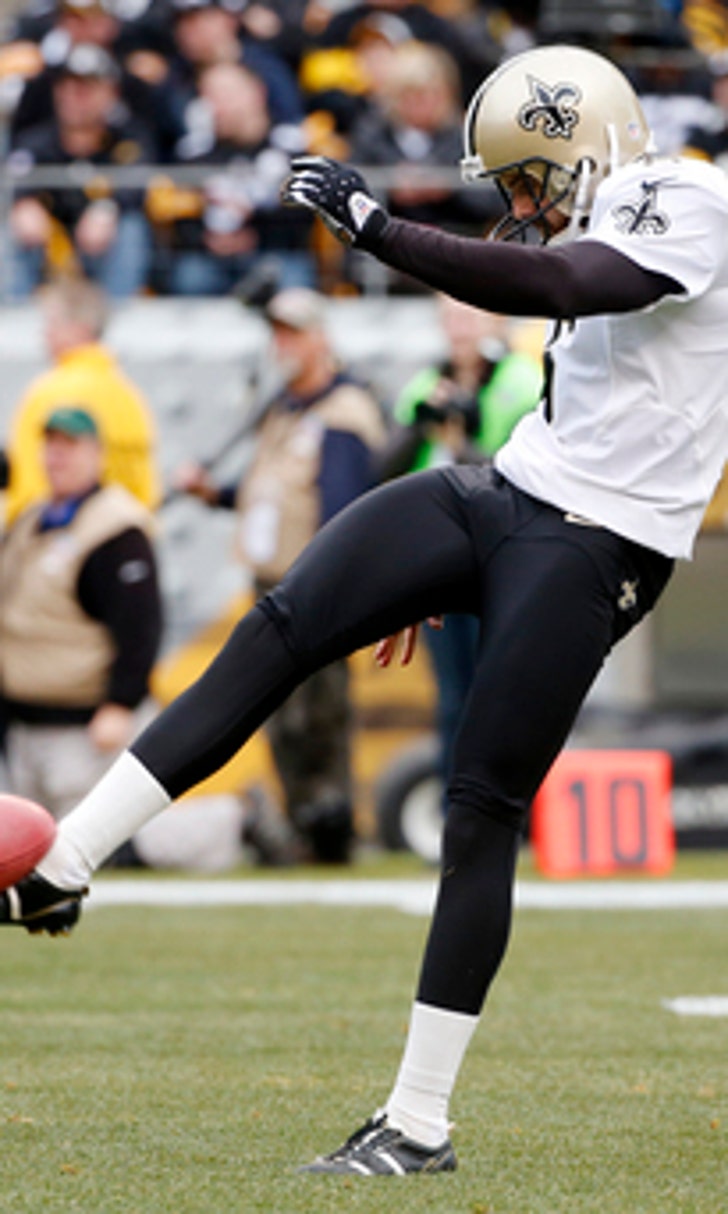 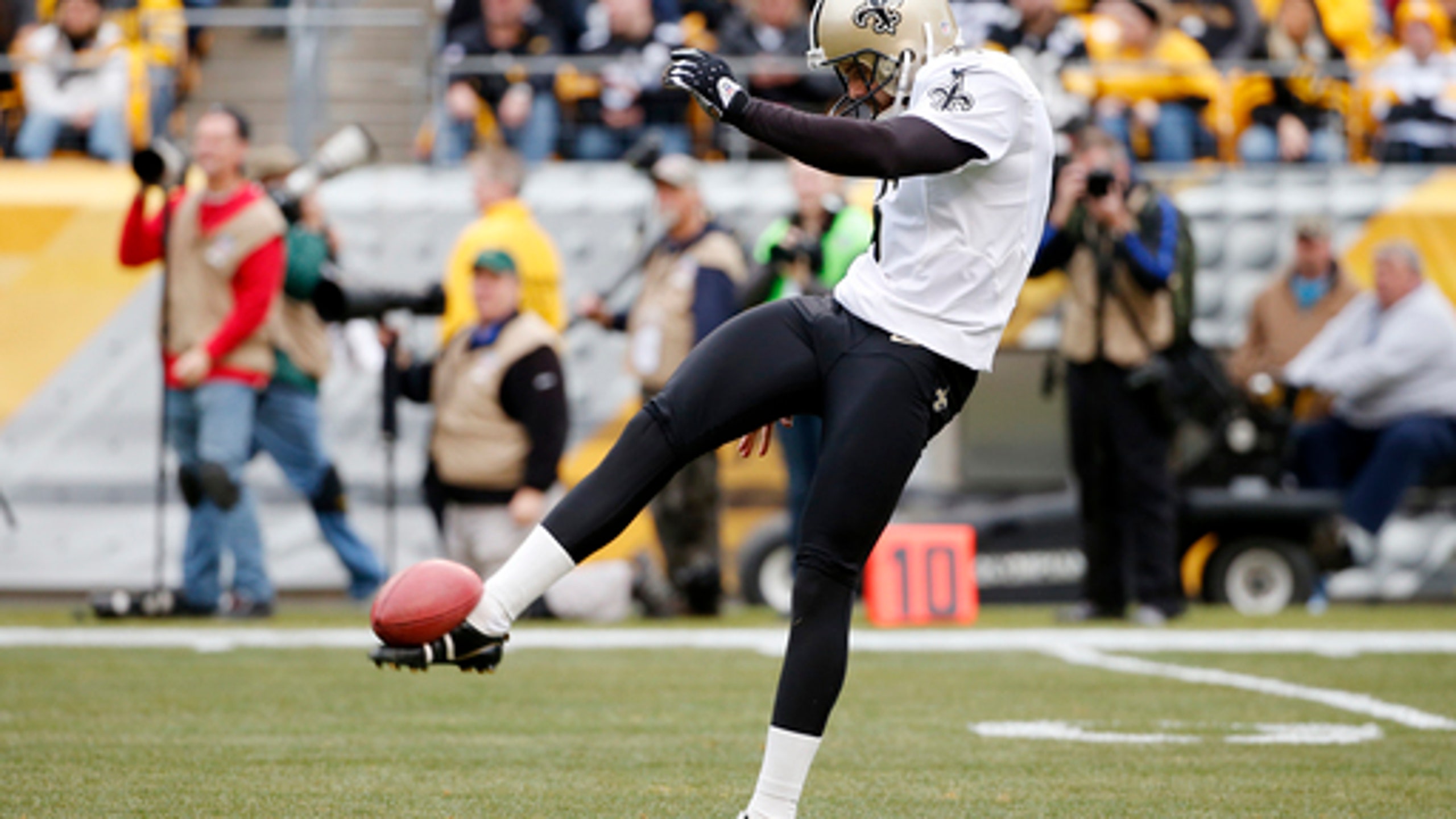 Saints' Morstead aiming for a career-high in key stat

While the punts that traveled 57 and 53 yards in the air demonstrated his leg is as strong as it was when New Orleans made a trade in order to draft him in 2009, Morstead said those kicks might have looked better than they were because of good coverage downfield.

''I'd give myself a C,'' Morstead said Wednesday when asked how he'd grade his performance during New Orleans' victory over the Chargers in Los Angeles last weekend. ''But we're in preseason and a lot of guys enjoyed covering downfield.''

While the 6-foot-4, 235-pound Morstead looks as fit as ever at age 31, he's hoping a more evolved approach and more refined techniques can produce the best net average of his career.

''You can't control every aspect of a punt play,'' Morstead said. ''Once it leaves your foot, it's not up to you.''

Establishing elite consistency as a ball-striker is Morstead's main goal. More predictable punts are easier to cover, he said, particularly if they land near a specified sideline right around the time the rest of the punt team arrives at that spot.

''I just want to punt spirals to the corners. If you do that, it's really hard to do punt returns,'' Morstead said. ''If I can put it where I say it's going to be, (other punt team members) can do their job at an elite level as well.''

As an example, Morstead points back to his rookie season out of SMU, when he could punt the ball as high and far as ever, but his net average was a career-worst 36 yards per punt because of a lack of accuracy leading to longer returns.

''Just because you can kick it high doesn't mean you're going to be successful. You still have to depend on other players,'' Morstead said. ''And the way that we punt now, directionally, it helps me have a sense of more control of the play, especially when my trajectory's good and it's high and not so far.''

Morstead has had one Pro Bowl selection in 2012, when the average length of his punts were 50.1 yards and his net average was 43.2 yards, both career highs.

Last season, Morstead had a net average of 42.4, the fourth best mark of his eight seasons. This season, has his sights set on a career-high 44.2 net average.

He wants to finish in the top five in net punting, but cares somewhat less about being selected to another Pro Bowl or being named All-Pro.

''It's a great honor,'' Morstead said, but stressed that accomplishing what coaches ask of him situationally is his priority, knowing that creating more of an edge in field position could be crucial for a team that saw seven of its nine losses last season come by six or fewer points.

''It's fun to feel valued at whatever job you're doing and (know) that it could potentially be the difference in the game,'' Morstead said.

Receiver and punt returner Ted Ginn, acquired in free agency from division rival Carolina this offseason, said he has long admired Morstead and now views him as one of the toughest punters in the NFL against which to execute a good return.

''I've studied him so much at Carolina, I feel like I'm his shadow. That guy is awesome,'' Ginn said. ''The way that he does things with his foot is amazing. ... That's something that you don't see in this league.''

Morstead also wants to retain his job as the holder on field goals, although he understands why coaches might prefer re-acquired backup quarterback Chase Daniel to take over.

''It's nice having a guy that can throw and be the threat of a fake,'' said Morstead, whose mother is English and who learned rugby and soccer in his youth. ''My best spiral is an underhand (rugby-style) throw, then my punt - and then my overhand throw.''

Still, Morstead stressed that he practices passing, just in case.

Notes: C Max Unger, who passed his physical last week, participated fully in practice for the first time this preseason after being activated from the team's physically unable to perform list. He's been recovering from foot surgery in May. ... Ginn also returned to practice after missing time last week. ... Those not practicing on Wednesday included LB Stephone Anthony, DE Alex Okafor, and CB Sterling Moore.

Three Ideas For Russ & The Seahawks
Martin Rogers presents three options to address Russell Wilson’s displeasure with the way things are being handled in Seattle.
3 days ago

The Brady Plan
Before he released a workout video, Saints QB Drew Brees' retirement seemed like a done deal. Instead, might he follow Tom Brady's path?
3 days ago