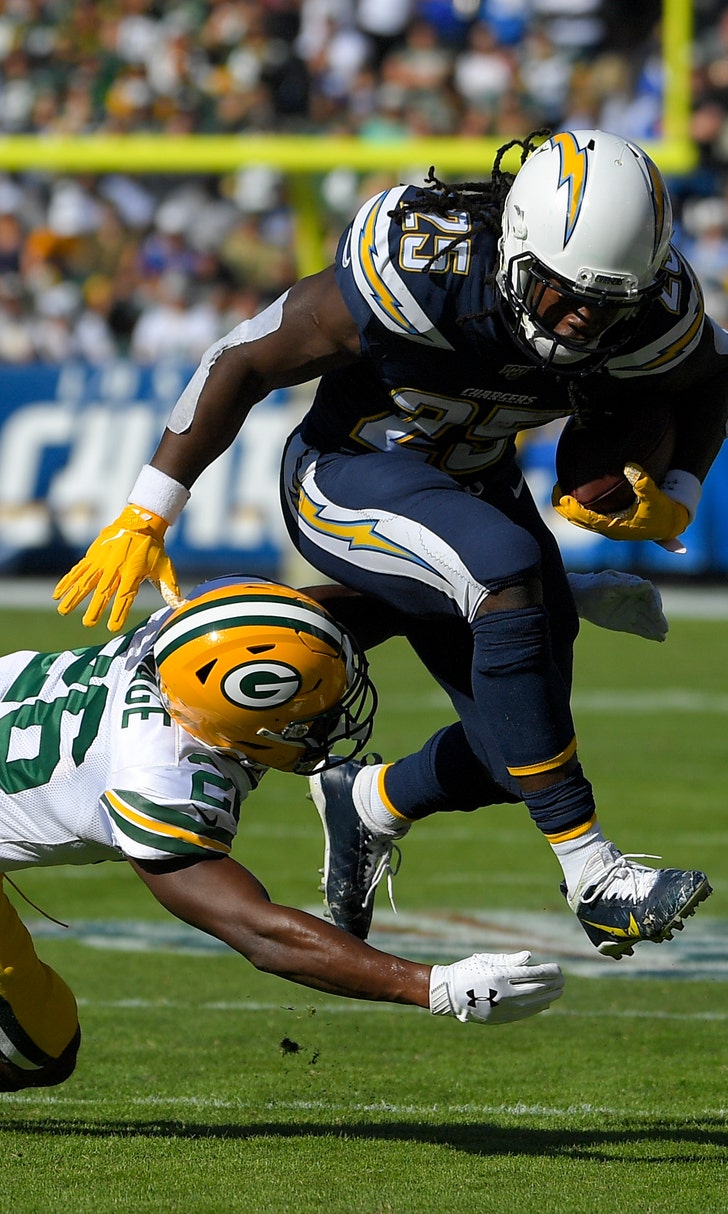 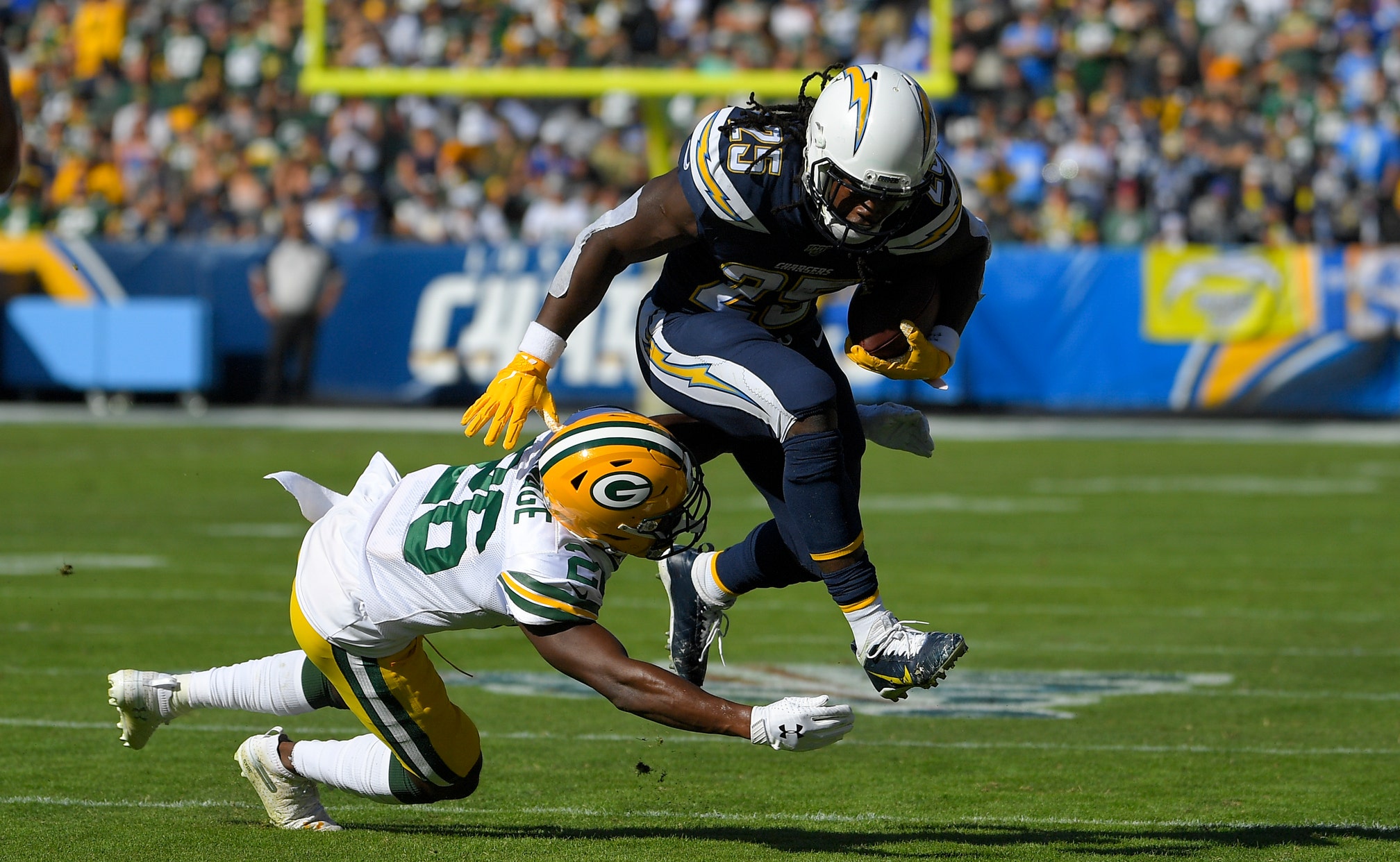 previous story
Titans struggled to get Henry involved early, fall to 4-5
next story
Colts' Jacoby Brissett is latest starting QB to get hurt

CARSON, Calif. (AP) — Just when the Los Angeles Chargers' season looked lost, they put together their best game of the year against one of the league's top teams.

Melvin Gordon scored two touchdowns and the defense held Green Bay's Aaron Rodgers to one of his worst outings as the Chargers dominated the Packers on Sunday, winning 26-11.

"For whatever reason we do better when it's a little bit 'the Chargers don't have a chance.' I don't know why. I don't think anyone gave us a chance in this one," said Philip Rivers, who got his first win over Green Bay. "I wish we did better when everyone thought we were really good like the beginning of the season. All three phases did a heck of a job."

Green Bay came in as the second-best team in the NFC but had its four-game winning streak snapped to fall to 7-2.

"This was a good slice of humble pie for us. We're kind of rolling, 7-1, and starting to listen to the chatter maybe a little too much," said Rodgers, who threw for 161 yards, his fifth-lowest total when he plays all four quarters.

For the first time this year, the Chargers (4-5) looked like a team that won 12 games and made the playoffs last season.

The offense was balanced and moved the ball consistently in Shane Steichen's first game as coordinator, and the defense kept Aaron Rodgers and the Packers out of the end zone until midway through the fourth quarter. Michael Badgley kicked four field goals in his first game back from injury.

Steichen, who was promoted after Ken Whisenhunt was fired last Monday, called a good game as the Chargers held the ball for nearly 36 minutes and averaged 6.5 yards per play. Los Angeles didn't have a three-and-out on any of its nine possessions and only had to punt once.

The running game, which had been held under 40 yards in four straight games, had a season-high 159 yards. Gordon, who came in averaging only 2.5 yards per carry, had 80 yards on 20 carries and Austin Ekeler added 12 carries for 70 yards.

"We established the run and committed to it. It was giving them enough opportunities," Chargers coach Anthony Lynn said. "Shane did an outstanding job. I thought he was aggressive when he needed to be. He prepared well all week and the players have confidence in him. Everyone stepped up and did what they had to do."

Most of Gordon's carries came in the second half, including a pair of 1-yard TDs off left guard in the third and fourth quarters. He also had the play of the game when he hurdled over Green Bay defensive back Chandon Sullivan during a 16-yard gain in the third quarter.

"I was finally in a groove," Gordon said. "We got a chance to actually try to seal the game with the run, so I was definitely excited about that."

Rivers completed 21 of 28 passes for 294 yards, and Mike Williams had the first 100-yard receiving day in his three-year career with three receptions for 111 yards.

Defensively, the Chargers pressured Rodgers all day with minimal blitzing and sacked him three times. Joey Bosa and Melvin Ingram each had 1½ sacks. Bosa has 5½ sacks in his past three games.

"A lot of four-man rushes, and they got after us a little bit up front. We've got to get back to protecting and throwing the ball out in time and being accurate," said Rodgers, who completed 23 of 35 passes.

Rodgers got most of his yards in the final 15 minutes after he was held to a career-low 61 yards through three quarters. He found a wide-open Jamaal Williams for a 10-yard touchdown with 6:21 remaining and then ran it in for the 2-point conversion.

Packers running back Aaron Jones came in averaging 137.8 scrimmage yards in his past four games but was held to 29 yards (30 rushing, minus-1 receiving). Davante Adams had seven receptions for 41 yards after missing the last four games because of turf toe.

Los Angeles dominated the first half on both sides of the ball but could not get into the end zone as Badgley supplied all the points with field goals from 29, 40 and 34 yards. The Chargers gained 250 yards in the first half and had a pair of scoring drives that started inside their 10. They gave up only 50 yards defensively, the first time since 2011 they had allowed that few in the first half.

It was only the third time under Rodgers — and first time since 2013 — that the Packers have had 50 yards or fewer in the first half.

"Really when you look at it, at the half we were pretty fortunate to only be down 9-0," Packers coach Matt LaFleur said. "Our defense did a good job of keeping the Chargers out of the end zone. Offensively, there was no rhythm whatsoever."

The Chargers beat the Packers for the second time in 12 meetings and the first time since 1984.

Chargers: OT Sam Tevi and LB Denzel Perryman both suffered knee injuries and did not return. Badgley kicked for the first time since the preseason after missing eight games with a groin injury.

Packers: Host Carolina next Sunday. Green Bay is 4-1 at home.

Chargers: Travel to Oakland for a Thursday night game against the Raiders.