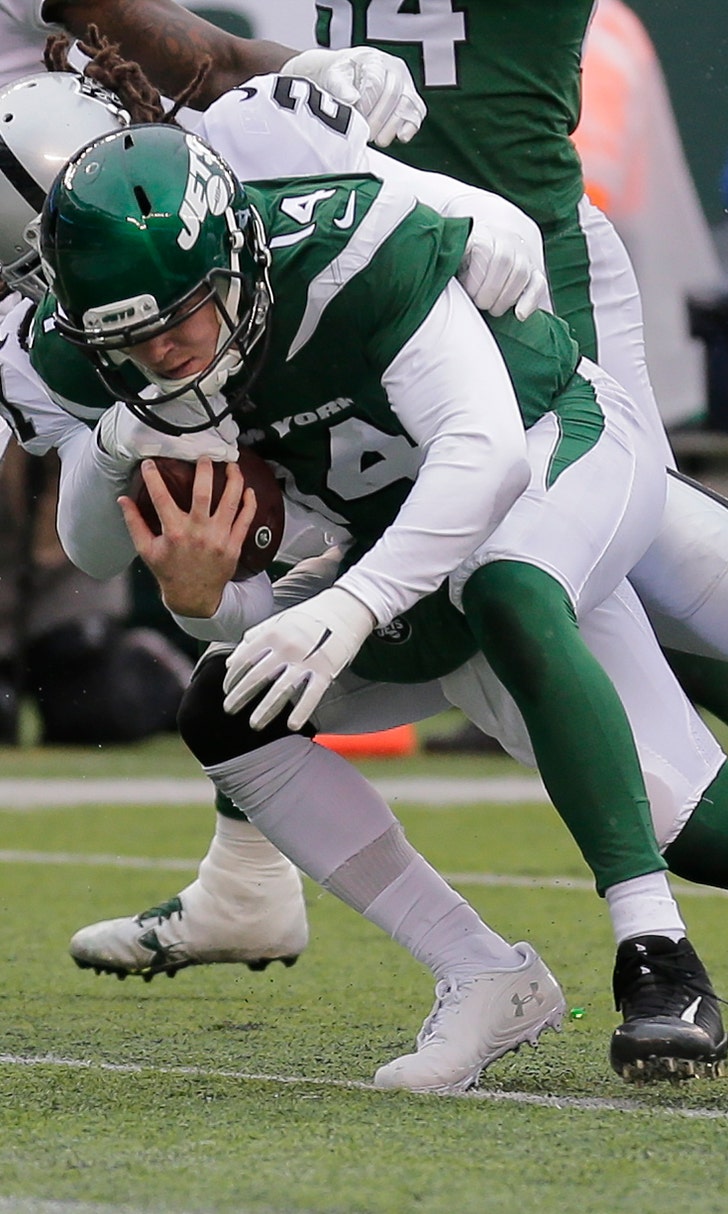 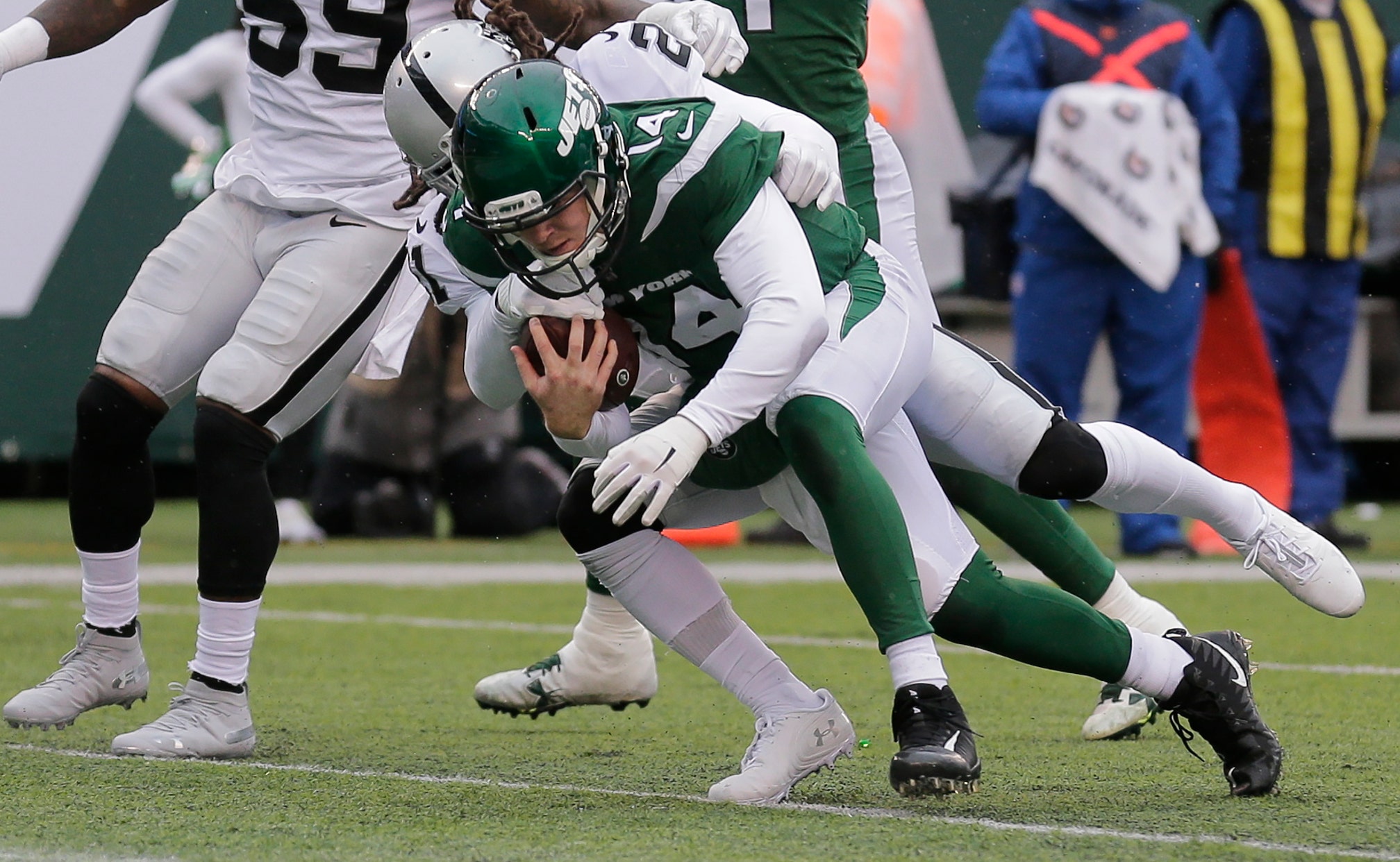 EAST RUTHERFORD, N.J. (AP) — Jamal Adams and the New York Jets heard all the rowdy Raiders fans during pregame warmups, booing them and acting as if they were in Oakland.

Then the Jets silenced them quickly with a dominant home victory.

Sam Darnold threw two touchdown passes and ran for another score, leading the Jets past the Raiders 34-3 on Sunday for their first three-game winning streak in over two years.

“I’m not going to lie to you, when we came on to the field, we felt disrespected,” Adams said. “We got booed in our own home stadium by the Oakland fans. We came back into this locker room and it was a hell of a talk.”

Adams wouldn’t divulge what was said, but the playmaking safety acknowledged he “sparked it off.”

Whatever was said, it worked.

Brian Poole returned an interception 15 yards for a TD and the rest of the defense made things miserable for Derek Carr, who was pulled by coach Jon Gruden with just under two minutes left in the third quarter.

The Raiders (6-5) came into a rain-soaked MetLife Stadium on a three-game winning streak with an eye on a possible AFC West first-place showdown at Kansas City next week. Instead, they got outplayed by a suddenly resurgent Jets (4-7) team that pulled away in the second half.

“We got our butts kicked,” Carr said. “There’s no other way around that. They got after us from start to finish. Hopefully, it’s an eye opener.”

Darnold was 20 of 29 for 315 yards — the fourth 300-yard game of his career — with TDs to Robby Anderson and Ryan Griffin in another efficient outing that helped New York to its first three-game winning streak since Weeks 3-5 of the 2017 season. The Jets didn’t punt until the 2-minute mark of the third quarter.

Coach Adam Gase took Darnold out in the closing minutes and had backup David Fales finish.

And all those boisterous Raiders fans? Most were gone by then.

“I don’t want to sound very arrogant or too cocky, but I think they came in a little too happy,” Adams said of Raiders fans. “I think they thought it was going to be an easy game.”

New York took a 13-3 lead into halftime and came out quickly in the second half.

On the Jets’ third play of the third quarter, Braxton Berrios took a short pass from Darnold on a slant and zipped down the field for 69 yards before being pushed out of bounds at the 1. Darnold found a wide-open Ryan Griffin for a touchdown on the next play.

The Jets’ No. 1-ranked run defense then came up big on Oakland’s first possession of the second half, stuffing Alec Ingold for no gain on fourth-and-1 from the Raiders 39.

New York took over and used some razzle-dazzle, Darnold handing off to Bilal Powell, who flipped it to Jamison Crowder — who then tossed it back to the Jets quarterback. Darnold then threw to Anderson, who reached up for a 30-yard gain. Three plays later, Darnold connected with Anderson again for a 1-yard touchdown.

On the Raiders’ next possession, Carr’s first-down pass was deflected by Neville Hewitt and landed in Poole’s hands. The Jets cornerback ran it in from 15 yards, giving New York a 34-3 lead.

Carr lasted one more series before being pulled for Mike Glennon. Carr finished 15 of 27 for 127 yards with the pick-6.

Rookie Josh Jacobs, fourth in the NFL in rushing, was held to 34 on 10 carries. The Jets came in allowing a league-low 79.1 yards rushing, and gave up 68 to Oakland.

“You ever been on a boat that’s sinking?” Gruden asked. “It’s not happy. It’s not pleasant. It’s adversity. It’s football. You’ve got to respond to adversity. We didn’t do a good enough job as coaches rallying our troops today.”

Trailing 3-0 after Daniel Carlson’s 48-yard field goal, the Jets appeared to score a touchdown on their opening drive for a team-record fifth straight game. But Darnold’s 8-yard pass to Demaryius Thomas was wiped away by a questionable penalty when officials called Daniel Brown for offensive pass interference after a video review. New York settled for a tying 24-yard field goal by Sam Ficken.

The Jets then benefited from what appeared to be another shaky call on their next drive. Darnold was sacked by Maxx Crosby from the 9, but Maurice Hurst was called for roughing the passer; officials ruled he dived on the pile late. Instead of a huge loss of yardage and down, it put the ball at the Raiders 4. Darnold faked the handoff to Le’Veon Bell, then kept the ball, ran up the middle and trucked through D.J. Swearinger for a 4-yard touchdown that gave New York a 10-3 lead early in the second quarter.

“I had someone in my way at the goal line,” Darnold said, “and I just did what I could to get into the end zone.”

Carr fell to 2-9 in his career in games that started with the temperature below 50 degrees.

The temperature at kickoff at the Meadowlands was 43 degrees.

Jets: Rookie RT Chuma Edoga will have an MRI on Monday after he left early in the second quarter with an injured left knee. He was helped off the field without putting any weight on the leg and didn’t return.

Raiders: stay on the road to face AFC West-rival Kansas City next Sunday.

Jets: take on the Bengals at Cincinnati next Sunday.