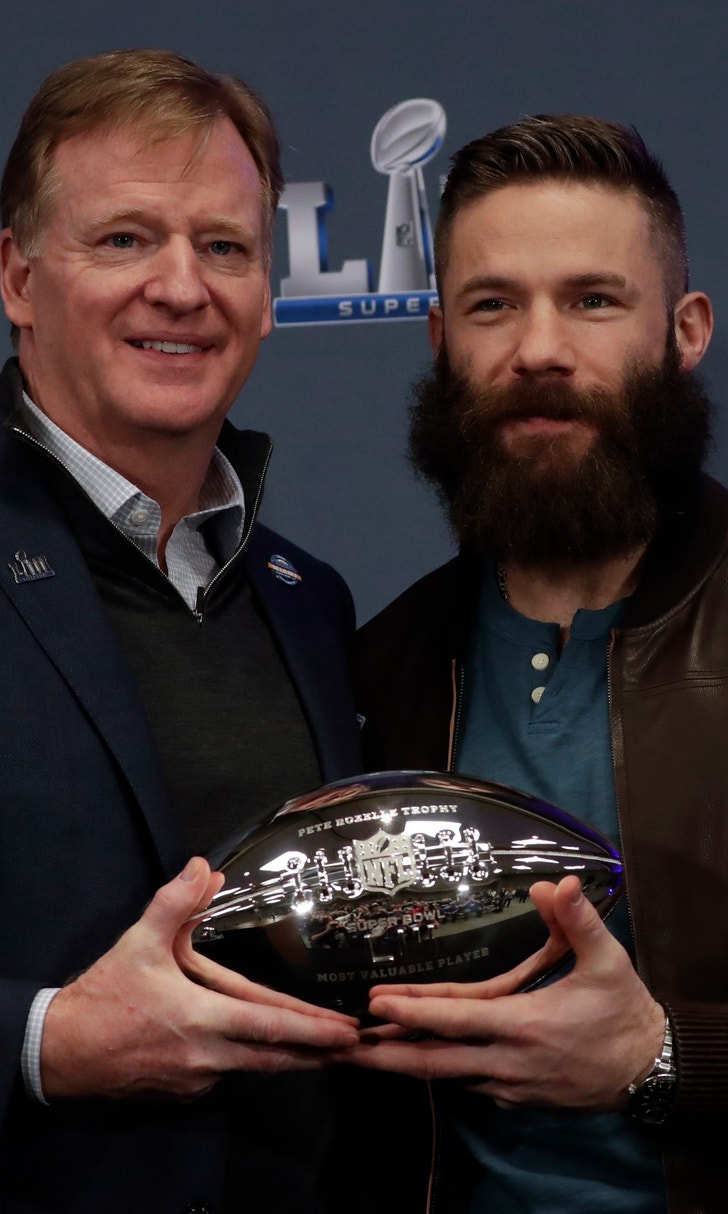 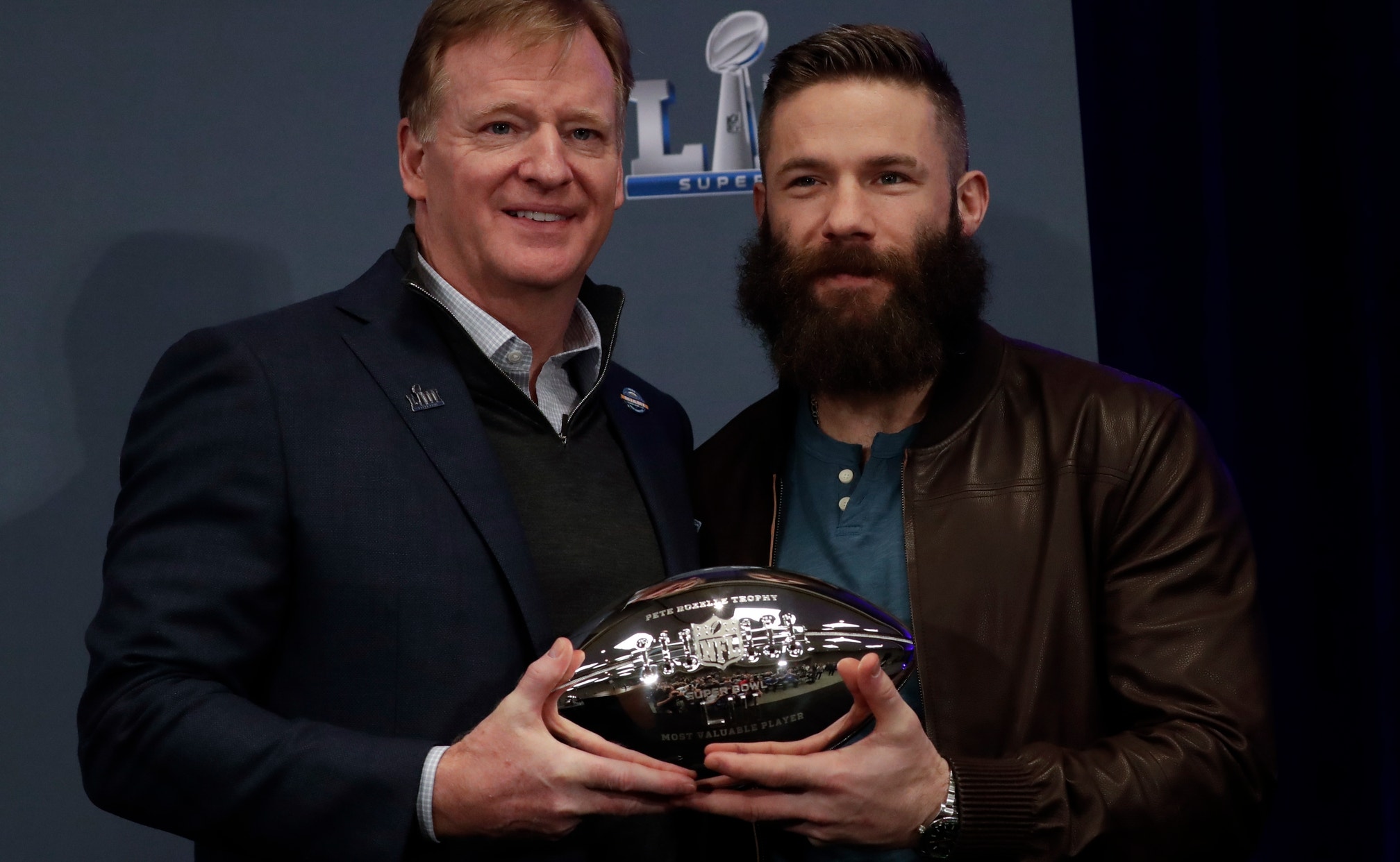 A diminutive guy with a bushy beard, picked in the final round of the draft, defying the odds to become one of the NFL's top receivers.

And, now, a Super Bowl MVP.

But let's not forget one other fairly important element to this story:

Edelman was honored Monday for his 10-catch, 141-yard performance the previous night, the only discernable bright spot offensively in a dreary Super Bowl won by the New England Patriots. Commissioner Roger Goodell — the same guy who said with a straight face five days earlier that Colin Kaepernick's two-years-and-counting banishment from the league for protesting social injustice was merely a football decision made independently by 32 franchises — was all smiles as he handed Edelman his silver, football-shaped prize known as the Pete Rozelle Trophy.

"Well deserved. Extraordinary performance, and not just last night, but his performance in postseason has been simply off the charts," Goodell said. "Julian, congratulations. Come on up and get your trophy."

There was no mention of Edelman being suspended for the first four games of the season after testing positive for a performance-enhancing substance.

In his brief opening remarks, the receiver talked of the "ups and downs" the Patriots had been through, what he called "just the ebbs and flows of the season."

Then came the first question.

"You missed last year (with a torn ACL), you come back this year and have a four-game suspension, talk about fighting back through adversity and coming out on the other end as the Super Bowl MVP," the reporter said, a tone of admiration In his voice. "What did that mean to you, through all the work that you put in?"

Coming off a serious knee injury, there's no doubt Edelman worked extremely hard to make it back at age 32, when there was plenty of skepticism that he'd ever be as effective as he was before.

But it's also worth noting that Edelman gave his rehab an illicit boost by taking a PED, undoubtedly looking to improve the odds of returning to the field on the downside of his career.

Edelman apologized for his mistake, expressed the usual confusion that all cheaters rely on when they're caught, but never revealed the substance in question. He served the suspension and returned to put up roughly the same prorated numbers as he did in 2016, before his injury, catching 74 passes for 850 yards and six touchdowns over the final 12 games of the regular season.

He was even better in the playoffs.

Edelman hauled in nine catches for 151 yards in a divisional-round victory over the Los Angeles Chargers. He had seven receptions for 96 yards in the thrilling overtime triumph at Kansas City in the AFC championship game. Finally, he provided an offensive spark in the lowest-scoring Super Bowl ever, helping the Patriots knock off the Los Angeles Rams 13-3.

Now, if Edelman was a Major League Baseball player or an Olympic athlete, he probably wouldn't have had a chance to shine on the big stage.

The MLB's doping policy has a provision that prevents anyone who tests positive from taking part in the postseason that year, even if they've already served their full penalty. The extra sanction was added in 2014 after All-Stars Jhonny Peralta and Nelson Cruz returned from doping suspensions in time to participate in the playoffs, which rightfully angered other players.

The World Anti-Doping Agency went down the same path, doubling the potential penalty for a first-time doping offender from two to four years, a way of ensuring that those blatantly caught cheating would have to miss the next Olympics.

But the NFL has never shown it's all that serious about stamping out doping, nor has the players union. At the very least, those who test positive for PEDs should face an eight-game suspension — half the regular season — and a postseason ban. Stricter testing rules, in line with international standards, should also be imposed, perhaps in tandem with relaxed restrictions on pot use and approval of medical marijuana to help deal with the chronic pain so many current and former players must endure.

Those of us in the media should also take a hard look at whether there are racial overtones to the way we look at those who violate the rules.

Edelman faced little real criticism over his doping violation, perhaps because he's usually gushed over with that convenient stereotype applied to so many white players: undersized, not as talented as those around him, someone who makes up for it with his intelligence and work ethic. There are undoubtedly fans, and perhaps even members of the media, who feel Edelman was merely showing just how dedicated he is to the game by doing whatever it took to get back on the field after a serious injury.

He was rightly lauded for his accomplishments — but let's not forget that other thing.