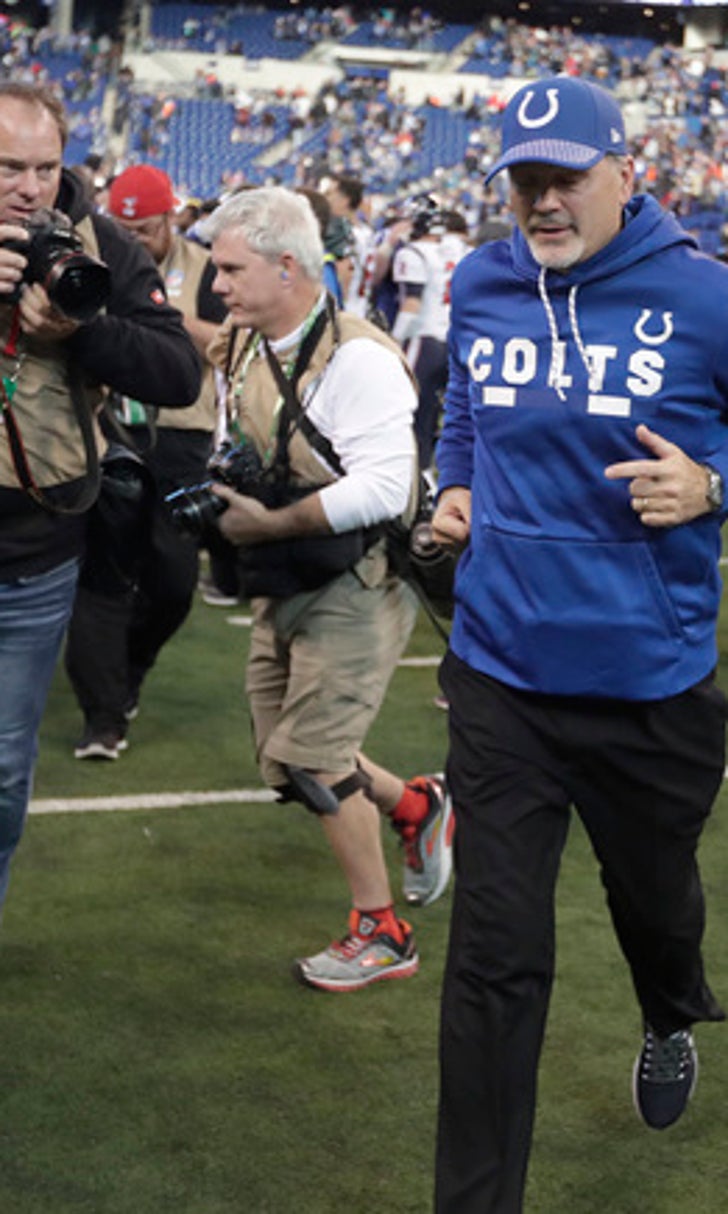 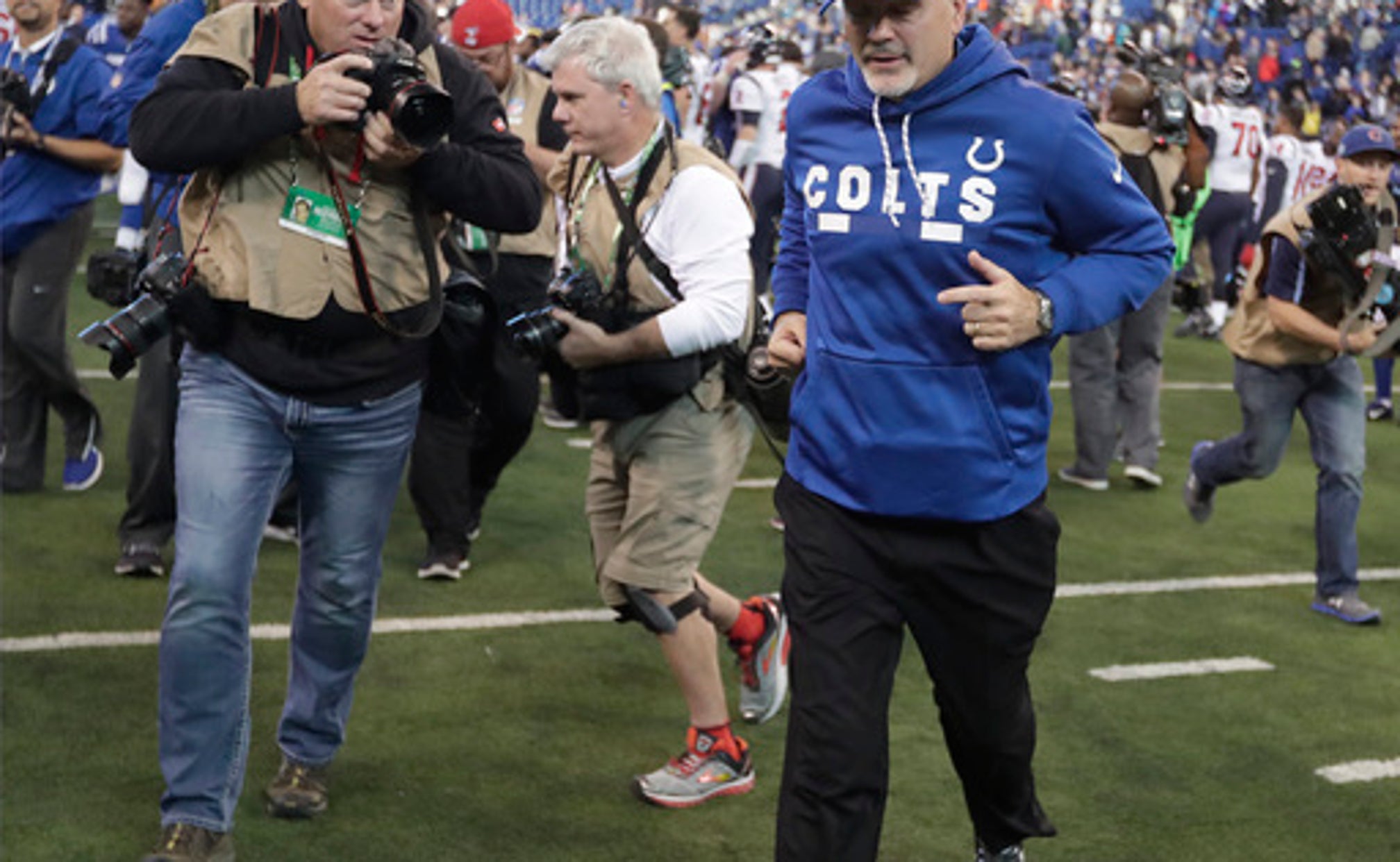 previous story
Dolphins owner says Gase, top personnel execs will be back
next story
Vikings get to 13-3 for playoff bye by beating Bears 23-10 (Dec 31, 2017)

And now it has cost him a job.

The win ended a six-game losing streak but couldn't cloak the fact Indy missed the playoffs three consecutive years, the first time that's happened since a seven-year drought from 1988-94, or finished with its first losing record in six years.

''Chuck Pagano provided Colts fans with many exciting wins and memories as head coach of the Colts,'' team owner Jim Irsay said in the statement. ''Throughout his tenure in Indianapolis, he impacted the lives of the players he coached, those who he worked with in the organization and Colts fans across the globe. Chuck's first season was one of the more inspirational stories in NFL history as he courageously battled and overcame leukemia. As a result, his CHUCKSTRONG Foundation has raised millions for cancer research. We are thankful for Chuck's contributions to our franchise and community and we wish him, Tina and the entire Pagano family nothing but the best moving forward.''

It was the worst kept secret in town.

Almost from the moment the Colts (4-12) were eliminated from playoff contention, speculation ramped up about Pagano's ouster being only a matter of time.

Even Pagano hinted at the move Wednesday when he referred to Sunday's game as the ''last rodeo.''

And before his postgame meeting with Irsay, Pagano sounded more resigned to his fate than he did either of the last two years when his job status also was tenuous.

''Call me crazy, but I'm a believer to the core. You know, I don't know what tomorrow brings. I don't know what the next hour brings,'' Pagano said. ''But I do know I'm very grateful to Jim Irsay and to the Irsay family. His unwavering commitment is second to none in football, and he's given us everything we needed to be successful. And I'm very grateful for the opportunity he gave me.''

Pagano wasn't entirely at fault for this season's results.

When Luck started every game during his first three seasons, the Colts won 11 games each year, reached the playoffs three times and advanced one step deeper in the postseason each year.

When the injuries struck, Indy crashed. The three-time Pro Bowl quarterback missed 26 of 48 games since 2015, and the result was consecutive 8-8 finishes before this season's (4-12) debacle during which Luck never took a snap.

But to an owner who has grown accustomed to playing games deep into January, Luck's absence wasn't enough of a reason to give Pagano yet another chance - especially after essentially putting Pagano on notice last January that he expected a playoff appearance after firing general manager Ryan Grigson.

''He (Irsay) is like all of us. He wants to win,'' Pagano said in October after the Colts were shut out for the first time since 1993.

It wasn't just the playoff absences.

As the 2017 season wore on, the shrinking home crowds became a gauge of fan sentiment.

But there were plenty of good moments, too.

The 57-year-old Colorado native presided over one of the greatest single-season turnarounds in league history in 2012, turning a 2-14 team that was supposed to be the NFL's worst into an instant playoff contender while waging a courageous public battle against leukemia. When Pagano missed 12 games to undergo chemotherapy, the tag-team coaching tandem of Pagano and offensive coordinator Bruce Arians delivered a nine-game improvement before losing to eventual world champion Baltimore in the wild-card round.

Arians was voted AP Coach of the Year.

For the most part, Indy dominated inside the division, going 25-11 while setting an NFL record with 16 straight wins over division foes.

But the rest of the league exposed Indy's flaws and Pagano's teams lost 22 times by at least two touchdowns.

The unraveling began in 2015 when many thought the Colts could make a Super Bowl run and Luck first got hurt.

Forty-year-old backup quarterback Matt Hasselbeck filled in admirably for Luck, who missed nine games with injuries. Hasselbeck went 5-3 as the starter and somehow the Colts managed to finish 8-8.

After the season, Irsay gave Pagano a second chance and a four-year contract extension. But with Luck starting 15 of 16 games, the Colts posted another 8-8 mark.

A third bad season was just too much to keep the player's coach around.

Many talked about their reverence for Pagano and how he did important things, like showing up to weddings other coaches did not. At times, it made a difference on the field.

The first game Pagano missed after being diagnosed with leukemia, receiver Reggie Wayne risked an NFL fine by wearing orange gloves, the color associated with leukemia awareness, and almost single-handedly willing the Colts to a come-from-behind win over Green Bay.

When Pagano returned for the regular-season finale, Houston running back Arian Foster honored the Colts coach by tapping the ''Chuckstrong'' sign after scoring a touchdown.

''He always fights for you, he's a player's coach. You dream of playing for a coach like that,'' receiver T.Y. Hilton said. ''He's a very emotional guy, that's what we love about him. He almost made everybody cry.''

Eventually, though, it came down to business and Irsay made the call.