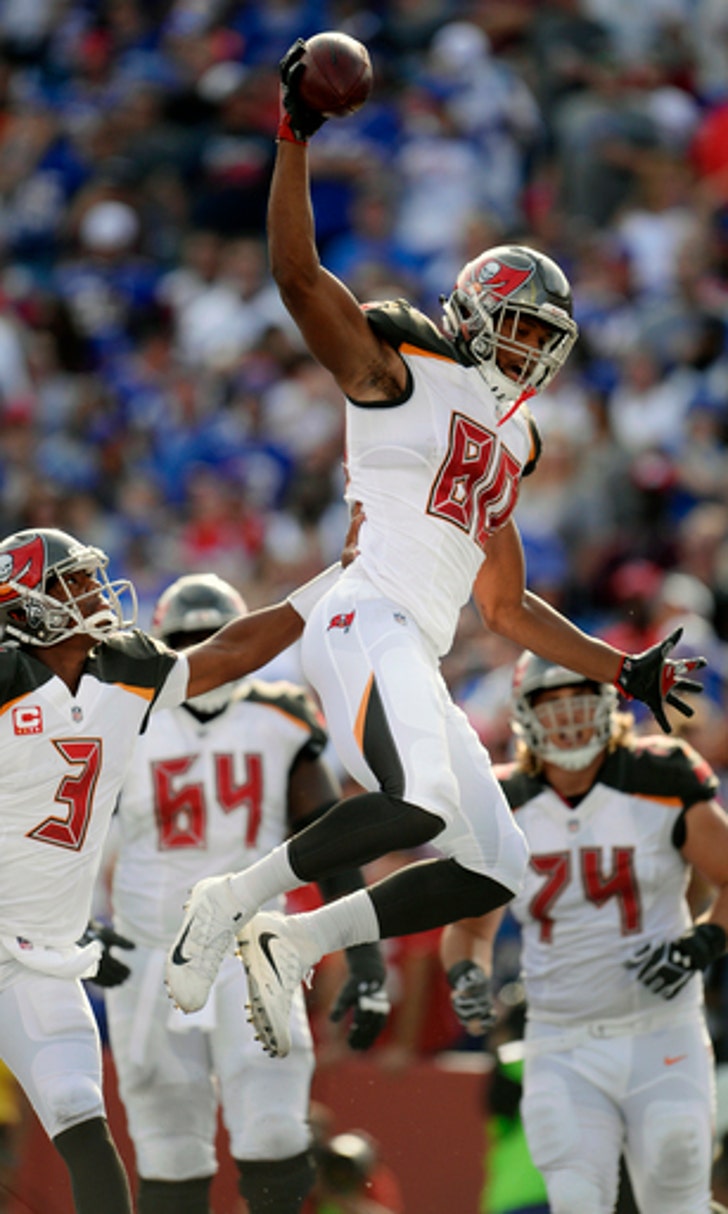 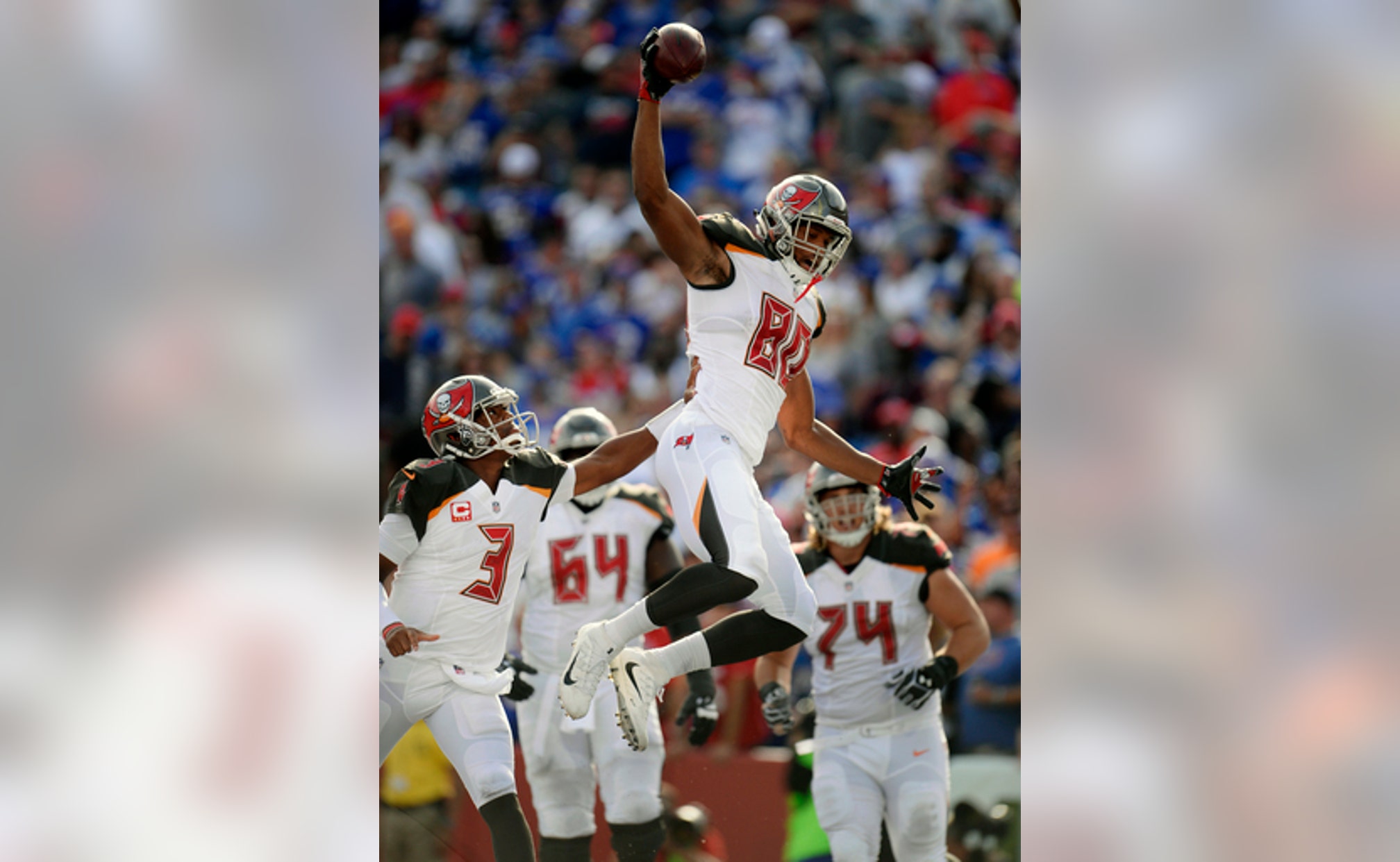 The next time White took the field, he stripped the ball from Tampa Bay receiver Adam Humphries to set up Stephen Hauschka's 30-yard field goal with 14 seconds left to secure Buffalo's 30-27 win over the Buccaneers on Sunday. The Bills erased a 27-20 deficit by scoring twice in the final 2:28.

''Some of these wins aren't the prettiest, but we're finding ways to win,'' said White, Buffalo's first-round draft pick out of LSU. ''I wouldn't want to play with another group of guys. No one's confidence wavered when we went down by that 7-point thing.''

Bills running back LeSean McCoy overcame his own miscue. Bouncing back from a lost fumble, McCoy scored his second touchdown on a 7-yard run to tie the game at 27.

Add it up and the Bills (4-2) have a winning record through six games for just the fourth time since their 17-season playoff streak began.

''I thought there is a lot of heart in this football team,'' said Sean McDermott, who became Buffalo's first rookie head coach to win his first three home games. ''To me, that really personifies this city. Heart. Toughness. Blue-collar.''

The Buccaneers (2-4) found another way to lose in dropping their third straight game.

Now they proved incapable of holding a lead a week after falling behind 31-0 in a 38-33 loss at Arizona. And it was a skid that began with a 19-14 loss to New England in a game kicker Nick Folk, since released, missed three field-goal attempts.

Winston showed no signs of a sprained throwing shoulder that sidelined him during the first drive against Arizona. He finished 32 of 44 for 384 yards passing and three touchdowns. He threw an interception and also lost a fumble.

Humphries blamed himself for losing the ball as he was running up the right hash on a bubble screen.

''It felt like momentum was in our favor. Just wanted to get off to a quick start,'' said Humphries. ''To come back and have a two-minute drive to win the game, yeah, it hurts.''

The Bucs appeared to take control when Evans had a step on White to make a right-toe-dragging 12-yard catch just inside the right sideline in the end zone to put them ahead 27-20 with 3:14 remaining.

Taylor finished 20 of 33 for 268 yards receiving and a 22-yard touchdown to Logan Thomas. He also overcame a fourth-quarter deficit for just the third time in his career and with an injury-depleted group of receivers. Starting tight end Charles Clay is sidelined with a left knee injury, while receiver Jordan Matthews played sparingly in returning to action three weeks since breaking his right thumb.

Thompson led Buffalo with four catches for 107 yards. Buffalo signed Thompson on Tuesday, a week after he had been cut by Chicago.

MCCOY ON THE RUN

McCoy, who also scored on a 1-yard run, ended a six-game scoreless drought that matched the longest of his career and dated to the final game of last season. He finished with 91 yards rushing - the most he's had since gaining 110 in a season-opening 21-12 win over the New York Jets.

Hauschka tied an NFL record by making 12 consecutive field goals from 50 yards or longer by hitting a 52-yarder put Buffalo up 20-13 with 13:31 left in the fourth quarter. The record is shared by Blair Walsh, Robbie Gould, Justin Tucker and Matt Prater. The Bills signed Hauschka in free agency this offseason after he spent the previous six seasons in Seattle. He's not missed an attempt from beyond 50 yards since missing a 50- and 52-yarder in a 35-6 win over Arizona on Dec. 21, 2014.

DeSean Jackson made an acrobatic catch while also preventing an interception. Facing 2nd-and-6 at Buffalo's 46, Winston threw a pass over the middle that was initially picked off by E.J. Gaines, who had a step on Jackson. Jackson, however, punched the ball loose , turned and caught it for what led to a 14-yard gain.

Buccaneers: None to report.

Bills: Cornerback EJ Gaines did not return after hurting his hamstring injury midway through the third quarter. Gaines was hurt while attempting to defend Jackson on a 60-yard catch negated by a holding penalty against tackle Donovan Smith. Safety Jordan Poyer hurt his knee on the final play of the game.