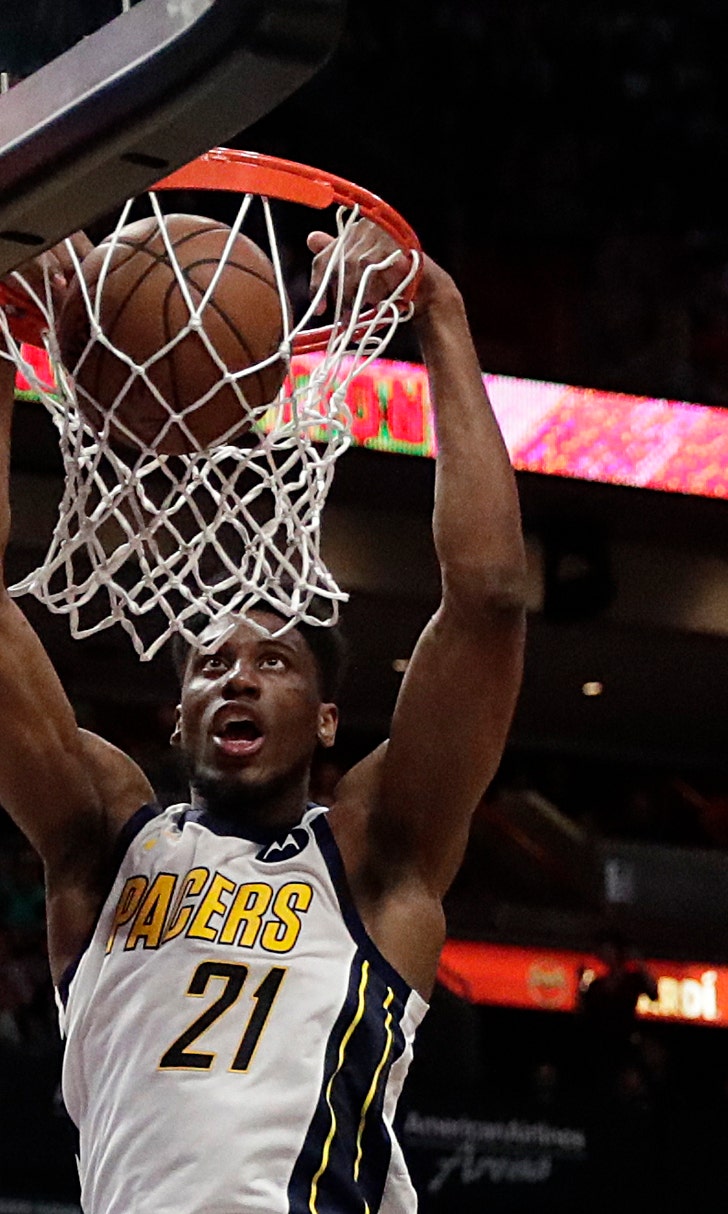 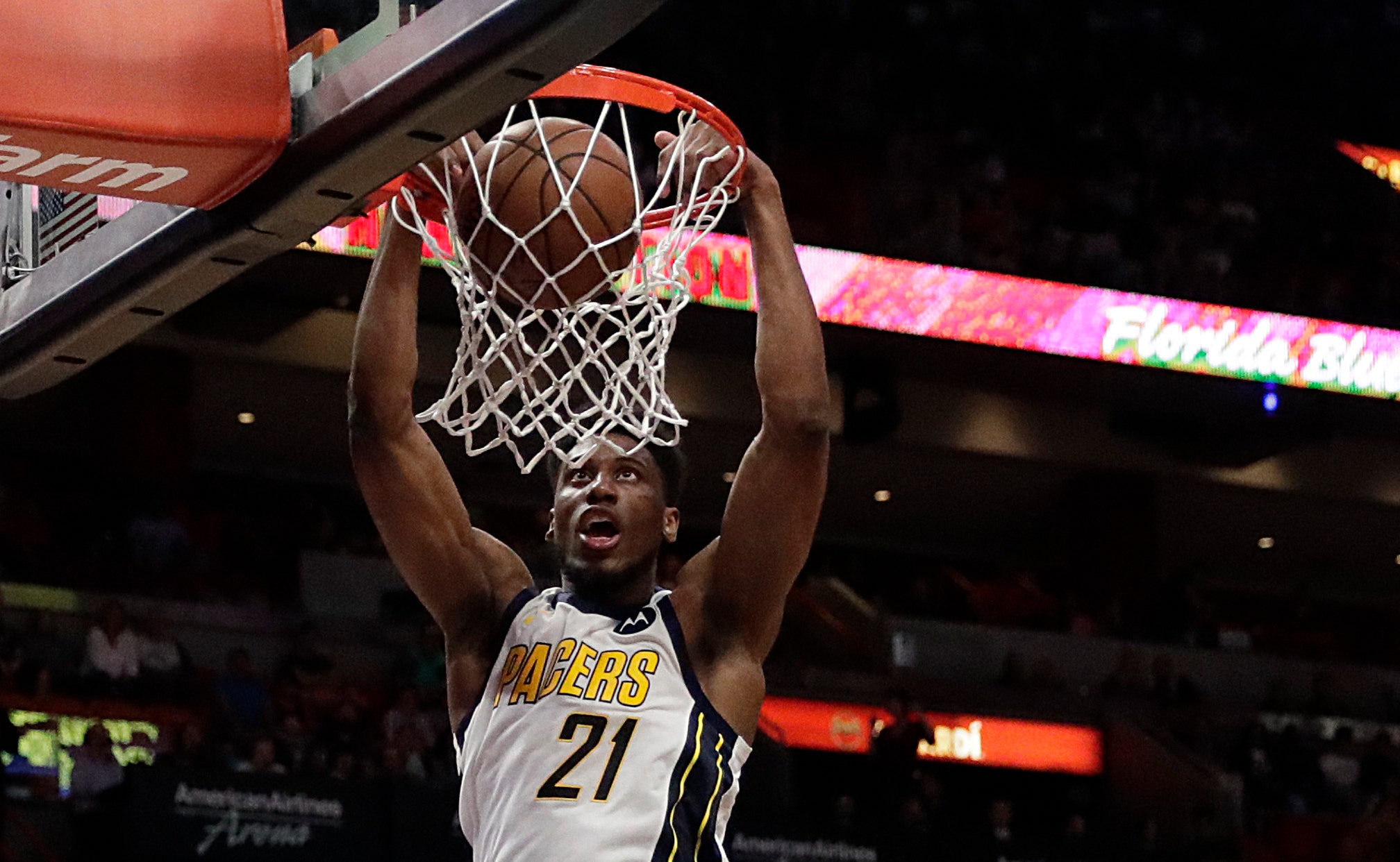 INDIANAPOLIS (AP) — When Victor Oladipo crashed to the floor in late January, the silence inside Bankers Life Fieldhouse was deafening.

Teammates quietly expressed best wishes to their injured teammate as he was wheeled off the court on a stretcher. Fans wondered aloud if this was just another chapter in Indianapolis' injury curse that has claimed Peyton Manning, Paul George and Andrew Luck during the previous eight years. League insiders debated how far the Pacers would slide in the Eastern Conference standings.

Somehow, after four consecutive losses, Indiana turned the page and won six of its next seven games heading into the All-Star break, still third in the East.

"We're just going out there and playing basketball," point guard Darren Collison said. "We're keeping the game simple and easy. Everybody is confident. It's getting closer to playoff basketball."

After tinkering with his lineup for a few games, coach Nate McMillan settled on a rotation that looks remarkably similar to what he used prior to Oladipo's season-ending right knee injury.

Starting forwards Thaddeus Young, a co-captain, and Bojan Bogdanovic reasserted themselves as leaders — just like when the Pacers went 7-4 without Oladipo in November and December.

Kevin Pritchard, the Pacers president of basketball operations, refused to panic. Instead of making a blockbuster deal at the trade deadline or looking toward next season, he simply added a future second-round pick for trade leverage and signed veteran guard Wesley Matthews, someone McMillan coached for two seasons in Portland. The deal, McMillan said, came with understanding Matthews would start.

And then, just like last season, Oladipo became the voice for Indiana's surprise turnaround.

"I'm not sure how important it was for them but it was important for me because I felt they needed to hear my voice and let them know that I'm good," Oladipo said recently, describing a pregame meeting he had with his teammates Feb. 2 in Miami. "I told them that we're at our best when people don't believe in us. I reminded them how good they are, that everyone was overreacting but they didn't need to. They're capable of doing very special things, even when I'm not there."

A few hours later, Indiana's longest losing streak in 13 months ended with a 95-88 victory over the Heat. Since then, they've been virtually unbeatable.

They closed out that four-game road trip with a 109-107 victory at New Orleans then blew out the two Los Angeles teams after returning home. They rolled past Cleveland and Charlotte before blowing a fourth-quarter lead against Milwaukee. The Pacers return to action Friday when the Pelicans come to town.

Replacing a two-time All-Star at midseason is never easy, especially one who won last season's steals title and one who is capable of pouring in more than 20 points per game.

But what the Pacers have done is rely on the key same elements that helped them make the playoffs and nearly eliminate LeBron James in the first round last season when everyone else wrote them off as a lottery team.

"They're really good defensively, really committed at that end of the floor and if you do that every night, you're going to have a chance," Bucks coach Mike Budenholzer said. "It seems like they have a great chemistry. They've got a good mix of players that play hard and play together."

Last February, with the Pacers in playoff contention and presumably in position to upgrade, nearly half the team's players asked Pritchard not to do a thing so they could finish the season themselves. He heeded their advice then just as he did during the offseason and earlier this month.

Rather than trying to replace Oladipo with a star, Pritchard went with his gut instinct and decided to let this roster play it out with only the addition of Matthews.

Indiana plays 10 of its final 24 games against teams in the top five of each conference, including a brutal eight-game stretch in March during which they face Denver and Oklahoma City twice and play at Golden State and Boston.

Then, of course, where Oladipo's presence will be sorely missed.

"What we'll miss most is him getting a bucket down the stretch," Collison said. "Teams that don't have a best player like that struggle with that. But we know what we have to do."

And Oladipo is convinced the Pacers will do just that — with or without him.

"When things get tough, I hope I can do whatever I can to help them get back on track," he said. "But they're more than capable of doing good things without me."

Victor Oladipo
share story
those were the latest stories
Want to see more?
View All Stories
Fox Sports™ and © 2021 Fox Media LLC and Fox Sports Interactive Media, LLC. All rights reserved. Use of this website (including any and all parts and components) constitutes your acceptance of these Terms of Use and Updated Privacy Policy. Advertising Choices. Do Not Sell my Personal Info