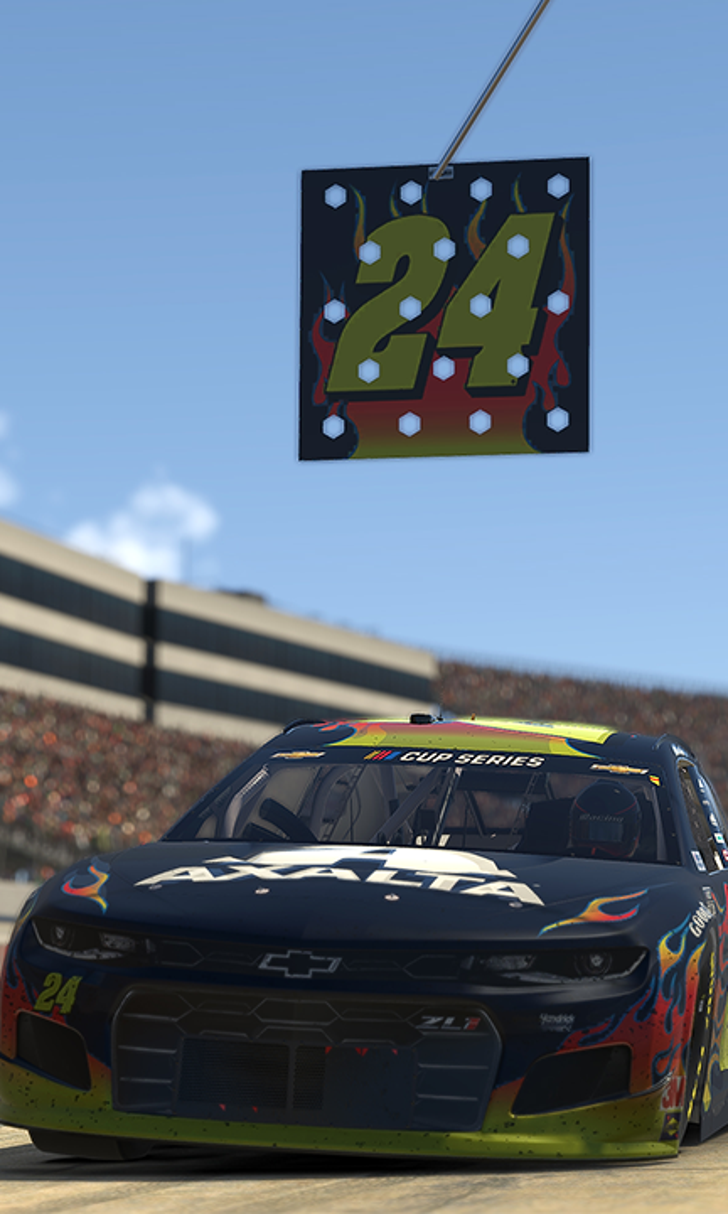 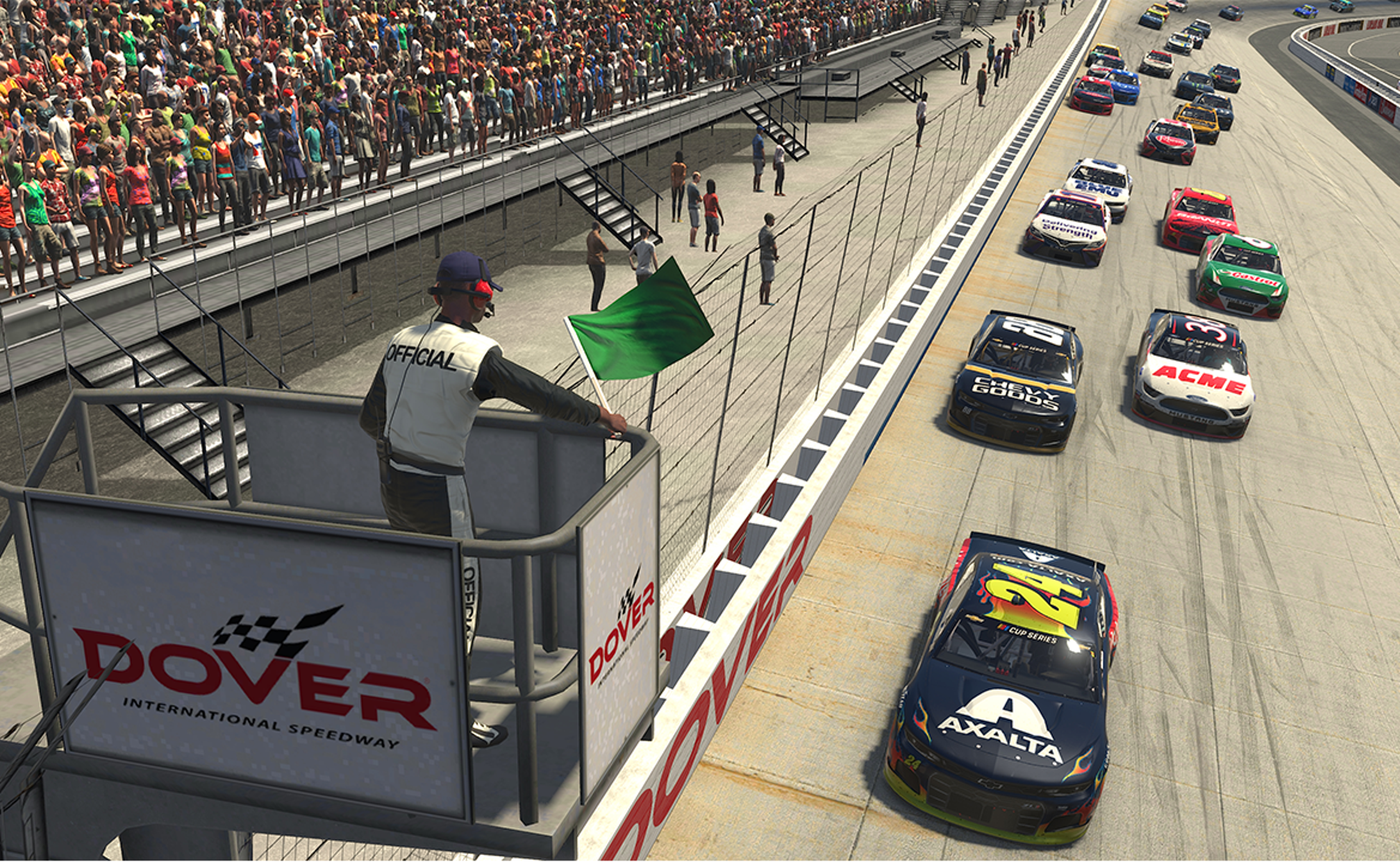 Experience has ruled the virtual track, and this week was no different.

"The concentration finally breaks on William Byron's face, and the joy and excitement of winning another iRacing event starts to show up."

Coming in close from behind another accomplished iRacer and virtual Texas Motor Speedway winner Timmy Hill passed the checkered line in third place.

Hill brought his lucky charm, Gigi, along for the ride today, but unfortunately his furry friend was not enough to give him the edge.

Today was no cakewalk for these drivers, and even in virtual reality, Monster Mile lived up to it's name – the day was filled with countless crashes and cautions.

The first wreck came early, as No. 96 Daniel Suarez got loose off of turn two and took out quite a few drivers in his wake – but check out seven-time Cup Series Champion Jimmie Johnson with the smooth save.

"In all, I've got seven cars involved."

Our third place finisher Timmy Hill showed you why he's a former virtual champion today, and with his expert moves, he slid past No. 75 Henderson Motorsports driver Parker Kligerman – but unfortunately with it, he sent Kligerman spinning out.

The question we're all asking ourselves: Was Gigi at the wheel?

"Timmy did a nice job getting a run off of turn four ... that's a low percentage pass there."

Kligerman just couldn't catch a break as we had another monster wreck – Cup Series driver Matt DiBenedetto was also involved, along with FOX pit reporter Regan Smith. Getting caught in the middle of a big one is never fun, and Smith joined us to air his grievances.

"They cleaned me out ... they're wrecking out on pit road in front of me right now. It's getting out of control right now."

Despite his trials and tribulations, Kligerman stayed positive, blessing us with his virtual jokes.

Amidst the countless crashes and stoppages, it was no surprise experienced drivers lead the pack – even with 50 laps to go, the first and third place finishers, Byron and Hill were neck and neck.

"There's a tough battle going on up here, up front – William Byron trying to take the lead back from Timmy Hill, and is going to do so."

There were still many laps to go and multiples wrecks that ensued, as Hill and Byron battled back and forth, but in the end, Byron held on to his No. 1 spot and drove right to Victory Lane.

And, of course, he had to celebrate with some donuts.

It was no surprise the seasoned iRacer finished on top at a difficult track like Dover, and we got to hear his thoughts on his finish post-race.

"It was fun, enjoyed it. I've enjoyed this iRacing series that we've had going, but definitely ready to get back in my normal car as well, but this has taught me a lot in the last few weeks, so it's been fun."

2015 NASCAR Camping World Truck Series champion Erik Jones – despite not coming out on top – had a great day at Dover and is ready for next weekend.

"Pretty solid race for us, our best run so far in the iRacing series. Awesome to get a good finish ... and I had a chance to get up there and contend for a win, which was pretty cool."

Among all those wrecks, not everyone had as great of a day as Jones – but don't worry, they still had a good time.

No. 4 Ford Mustang driver Kevin Harvick debriefed after his difficulties on the track:

"Holy wow, that was a lot of wrecking ... it's hard to miss wrecks at Dover. We hung in there today, and we plowed away, just kept fixing the car ... and it's been a lot of fun."

We have our final virtual race next weekend, and, boy, are we finishing out with a bang!

We're taking you back to historic North Wilkesboro, where NASCAR hasn't been since 1996 – you'll want to tune in Saturday, May 9 at 3 pm ET on FOX.

And there might even be a special guest appearance by the last champion to be crowned at the North Carolina Speedway, legendary driver Jeff Gordon.

"I said Talladega is the only race I'm going to do in iRacing – I don't know that news is exciting. I may have to come back for North Wilkesboro ... I mean come on, I won the last race there. I must know something about that place."