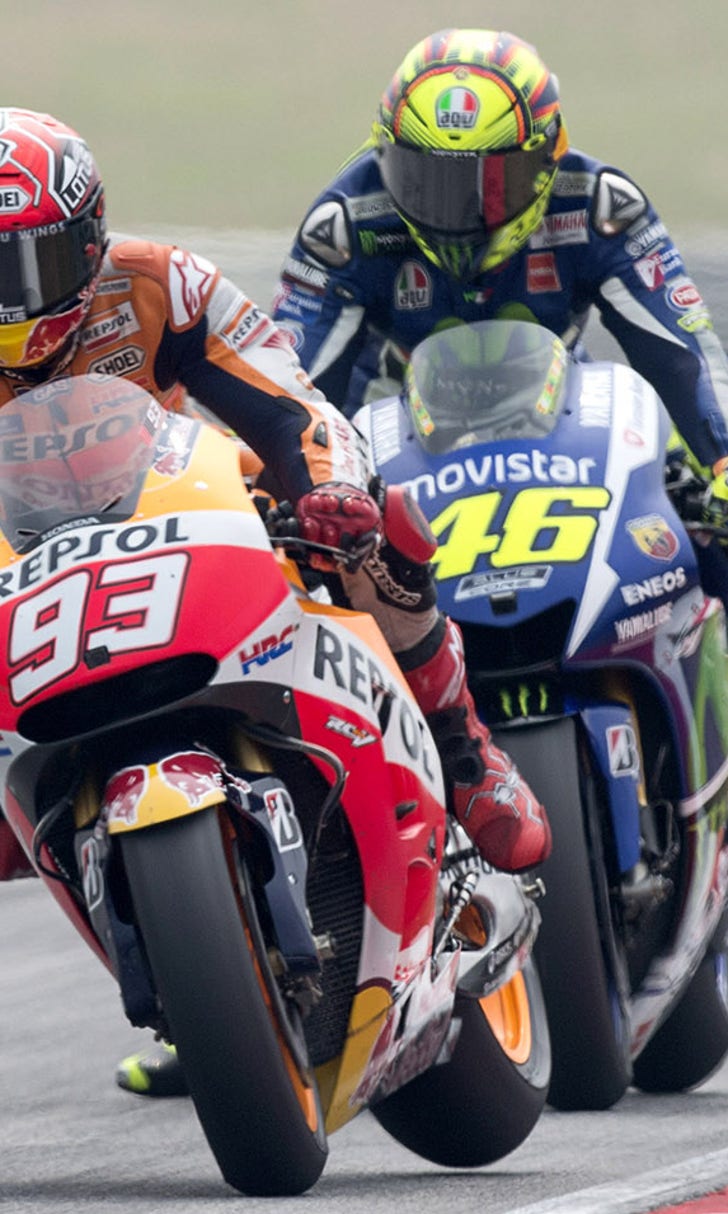 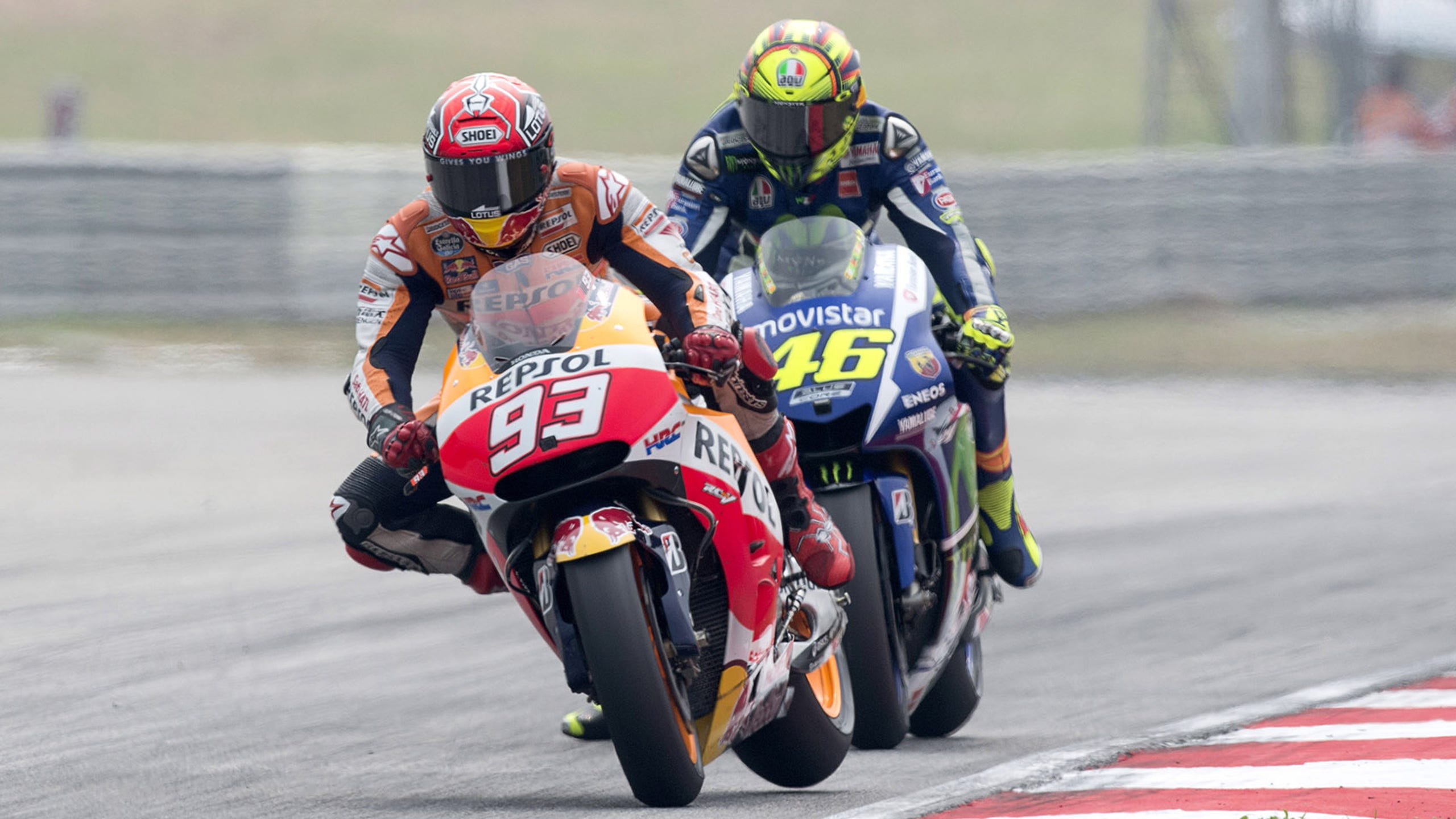 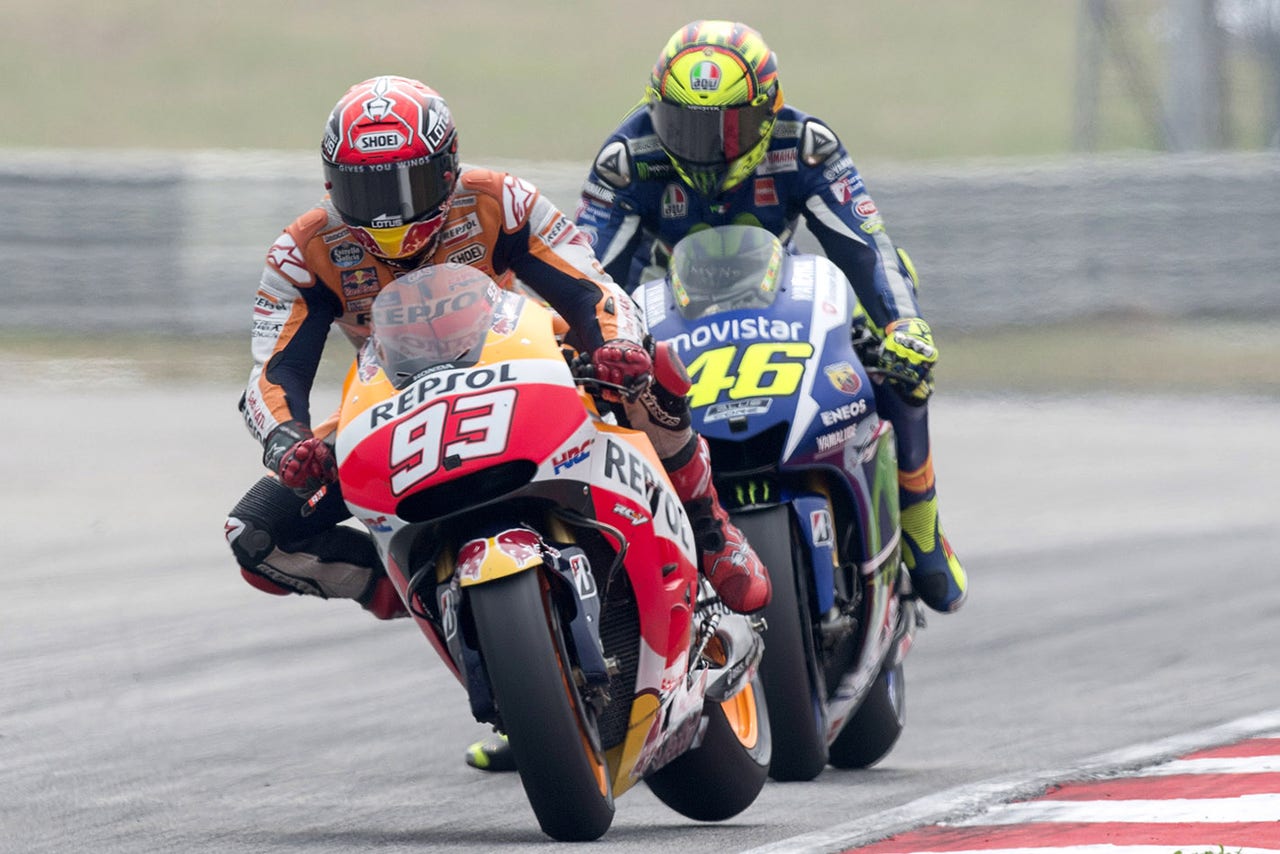 The massive meltdown between Rossi and Marquez at Sepang has opened a deep divide between two bike racing superstars.

Honda's claim that a "sudden impact" on Marquez's front brake lever caused his crash is set to add further tension in advance of this Sunday's season finale at Valencia.

In a dramatic move, Rossi has asked for a temporary suspension of his rear-of-grid start penalty at the Valencia GP from the Court of Arbitration for Sport (CAS) in Switzerland.

The penalty was imposed by Race Direction, and confirmed by the FIM Stewards, after Rossi intentionally pushed Marquez off the racing line at Turn 14, causing him to crash.

Shuhei Nakamoto, vice-president of the Honda Racing Corporation, says Marquez's claim that his front brake lever was deliberately hit by Rossi's leg is supported by the data.

"It is clear that Valentino intentionally pushed Marc towards the outside of the track, which is out of the rules, therefore Marc had no other option other than to run wide," said Nakamoto in explaining the Sepang incident.

"We believe that this pressure was a result of Rossi's kick. The data acquisition from Marc's bike is available if anybody from Dorna, the FIM or media want to check."

At the post-race hearings in Sepang, Rossi denied kicking out at Marquez and race officials said video evidence was inconclusive.

Marquez won the Phillip Island race by passing Lorenzo on the final lap, and thus robbing him of five points.

Adding fuel to the fire, Nakamoto has reminded Rossi that it is not unfair for two riders to race competitively, even if one is not fighting for the world championship.

Back in 2010 at Motegi, it was Rossi, out of title contention, who staged a brutal contest with Yamaha teammate Lorenzo who was in the process of wrapping up his first world championship.

"Valentino was out of the race for the title (Motegi 2010) but had a great battle with his teammate Jorge," Nakamoto said.

"After the race, when Jorge complained about Valentino being too aggressive and with no meaning as he was out of the championship, Valentino commented: "I said to Yamaha, what do you expect from me, to arrive behind? If I know this, I will stay at home."

"We totally agree with Valentino's approach and will always support our riders to achieve the best results possible.

"At Sepang, Marc simply wanted to take the best result possible for him and his team, it's not in his nature to settle for fourth place when there is a chance to fight for third."

After 17 races, Rossi carries at seven-point lead over Lorenzo into the finale at Valencia.

Rossi's legal bid to CAS to free him of the rear-of-grid penalty shows just how desperate he is, at 36, to win an eighth MotoGP world title.