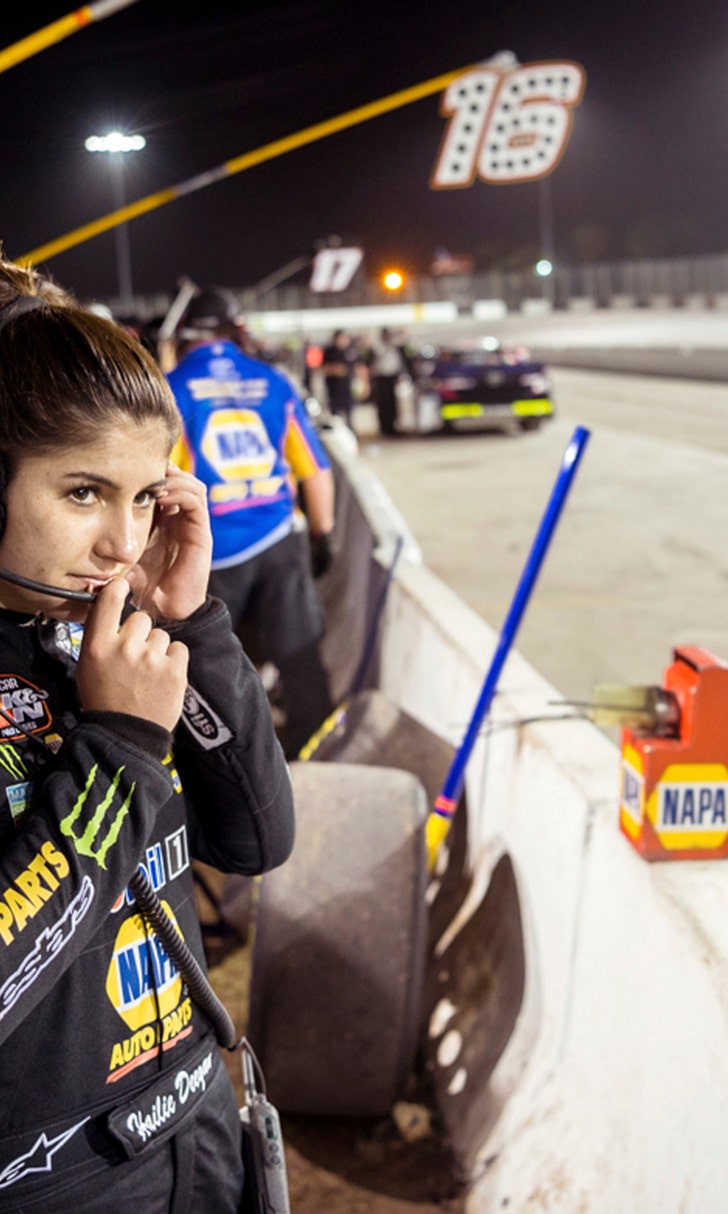 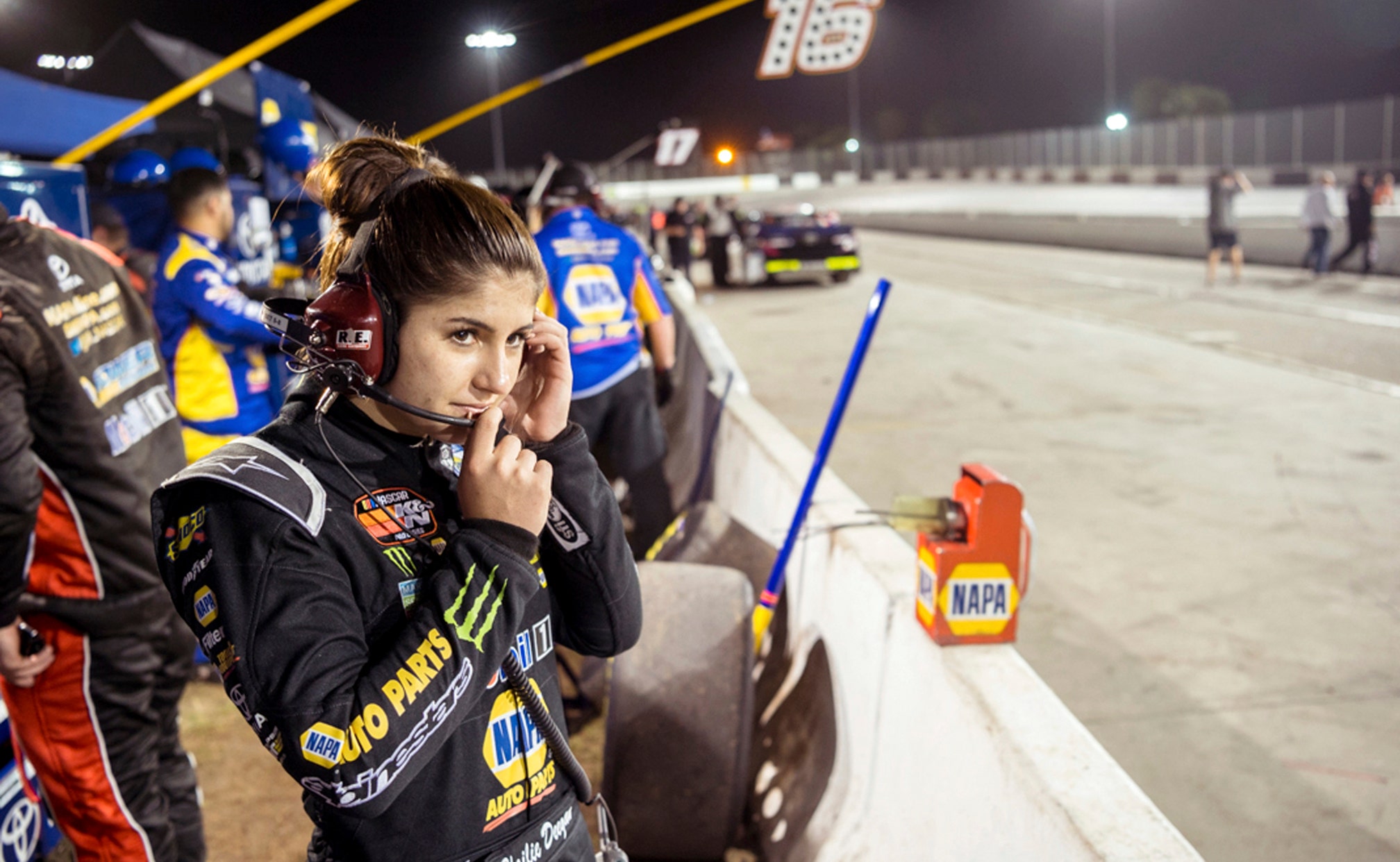 GRANITE CITY, Ill. (AP) — There are three questions that Hailie Deegan gets from everybody she comes across, and while she insists they're not necessarily annoying, they certainly are persistent.

The first is about NASCAR star Kevin Harvick, who gave the young driver a shout-out after they raced against each other in a small event earlier this year. The second is about her favorite driver, and the last is about what it's like being the next coming of Danica Patrick.

It's probably best to take them in reverse order.

First, she explains, there is little in common between Deegan and the most well-known female driver in motorsports. Deegan is the daughter of motocross legend Brian Deegan, which means she grew up on dirt — not in IndyCar — and is trying to work her way through stock car's lower levels.

Second, she's a big fan of Kyle Busch, which says a lot about her personality. Busch is loathed by many NASCAR fans for his bad-boy attitude, but the 17-year-old Deegan loves that the 2015 Cup Series champ brings an edgy, almost heel-like quality to racing.

And finally, she thought it was pretty cool that Harvick thought so highly of the teen from Temecula, California.

"It was crazy," she said during a break between recent practice sessions at Gateway Motorsports Park near St. Louis, where Deegan was preparing for that night's race in the K&N Series.

"He was one of the first to talk about me publicly in the NASCAR world," Deegan said, "so that was cool. But I'm with Toyota, so my favorite drivers have to be Toyota drivers."

Yes, it was officials from the auto manufacturer that decided there was enough promise in Deegan to lure her away from a promising off-road truck career to the world of stock cars.

Deegan spent some time testing last year with Bill McAnally, and a deal was struck to race a full K&N schedule this season. And while she's racing against other drivers with years of experience on ovals and road courses, Deegan has more than held her own, leading laps last week at the Las Vegas dirt track and twice finishing second while building a strong case for rookie of the year.

"It's funny," Deegan said, "because coming into this year we were like, 'OK, our goal is to run top five.' And now it's like, 'I want to win.' It's fun to see how your goals change so quickly."

Then again, moving quickly is part of Deegan's DNA.

She grew up going to motocross races with her dad, a 10-time X-Games medalist and founding member of the Metal Mulisha. Brian Deegan became a cult icon for the crazy stunts he pulled on a motorcycle, to say nothing of the devastating crashes that left him with broken bones too numerous to count. Eventually he moved from two wheels to four, embarking on a successful off-road truck career.

While other little girls were playing with dolls, Hailie Deegan was always in dad's back pocket at the track, and it seemed almost inevitable that she would end up behind the wheel.

She was 8 when she climbed into her own truck the first time. She won a championship and quickly moved up the ranks, reaching the pro level a couple years ago — which meant young Hailie was at the same start line as her old man.

There was no trash-talking, though. Good-natured ribbing, maybe, but mostly just support.

"He's the reason I'm good at this," Hailie Deegan said. "He's always like, 'If you're not 110 percent into this you're not going to make it.' So I train my butt off when I'm off the track. I work out all the time. I'm always watching film. I practice all the time. I have a dirt oval in my backyard that I practice on, and a road course. I race late models, go karts. Anything I can get in."

Her workout regimen is documented on Deegan's social-media accounts, where she has about 13,800 followers on Twitter and 216,000 followers on Instagram. Her hectic schedule is summed up by this: After leaving Gateway last month, she hopped a plane to sponsor appearances, than jetted to Wisconsin to run her truck in one of the biggest races of the season at Crandon International Off-Road Raceway.

Then it was back to a late model on pavement, and another K&N race a couple weeks later.

"She's just got a great knowledge of racing," McAnally said. "Her dad has done an amazing job building a foundation. She can tell you what she needs out of a car to feel comfortable, to go fast. We have kids who have won some big races, and have years and years of experience, and this is her first season, so to do what she's done this season is quite impressive."

Her dedication is evidenced by the fact she graduated high school with straight-As at 16, allowing her to spend more time racing. Deegan and McAnally both pump the brakes when it comes to a rapid rise in NASCAR, though. Deegan is still the new kid in the garage, and in an age when sponsorships are drying up and finding a competitive ride is harder than ever, the road to racing's pinnacle has never been tougher.

"She's used to driving through it and over it, and quite successfully, but this is different," McAnally explained. "She's learning. She's paying her dues."

She doesn't mind, either.

Deegan knows NASCAR is a more lucrative career path than off-road trucks, which is a big reason why she made the leap. But she also transitioned to pavement because it's something new.

At truck races, she's Brian Deegan's daughter. At stock car races, it's almost the opposite.

"Coming here, it's like, people don't even connect it," she said. "Some people say, 'I didn't realize you were Brian Deegan's daughter.' It's my own world and it's my own racing."

That may be why she bristles, ever so slightly, when Patrick's name is brought up. Patrick retired earlier this year.

In other words, she's OK being the next Deegan. Not the next Danica.

Deegan isn't sure where her career goes next, though the natural arc would be another year in the K&N or ARCA series, then a jump to the Truck Series and eventually the Xfinity Series. Maybe in five or so years, everything will align and she'll be racing alongside Harvick in the Cup Series.

But at the moment, she's simply just enjoying herself.

"This stuff is just fun," Deegan said. "I'm the person who likes to try new things. This is a new thing. I've been racing off road for seven or eight years, and I feel like I've enjoyed that a lot, but I wanted to try something new and this is all new to me."