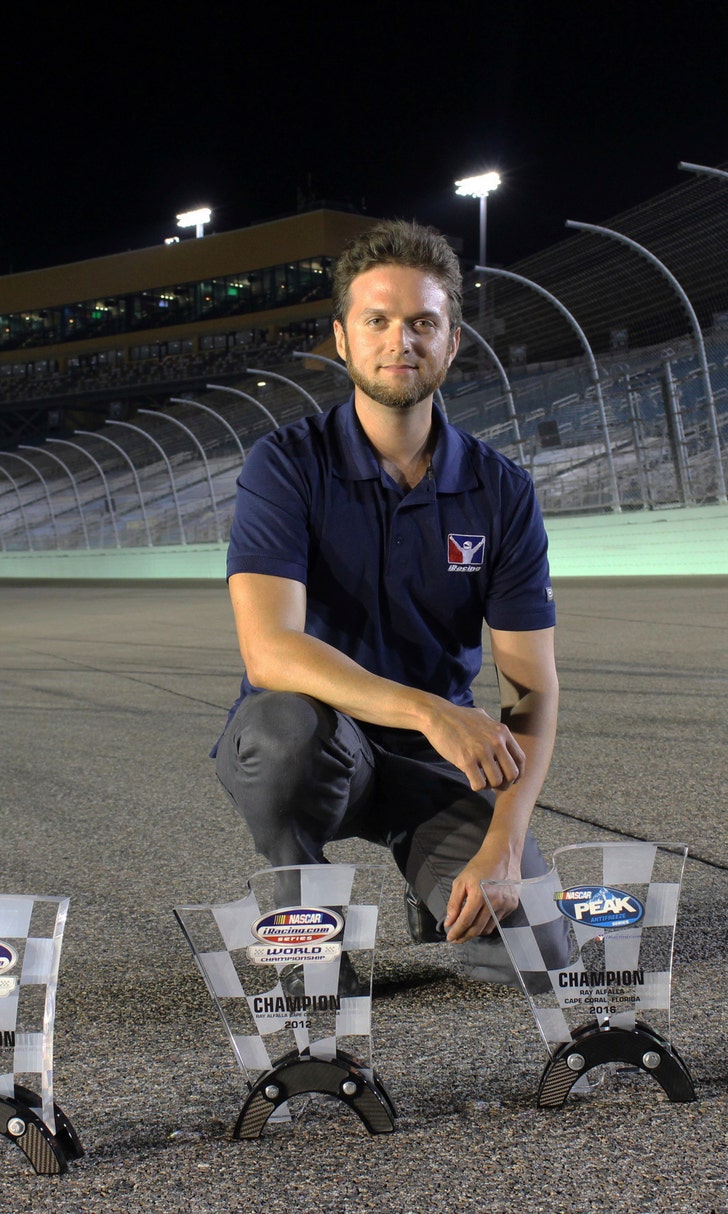 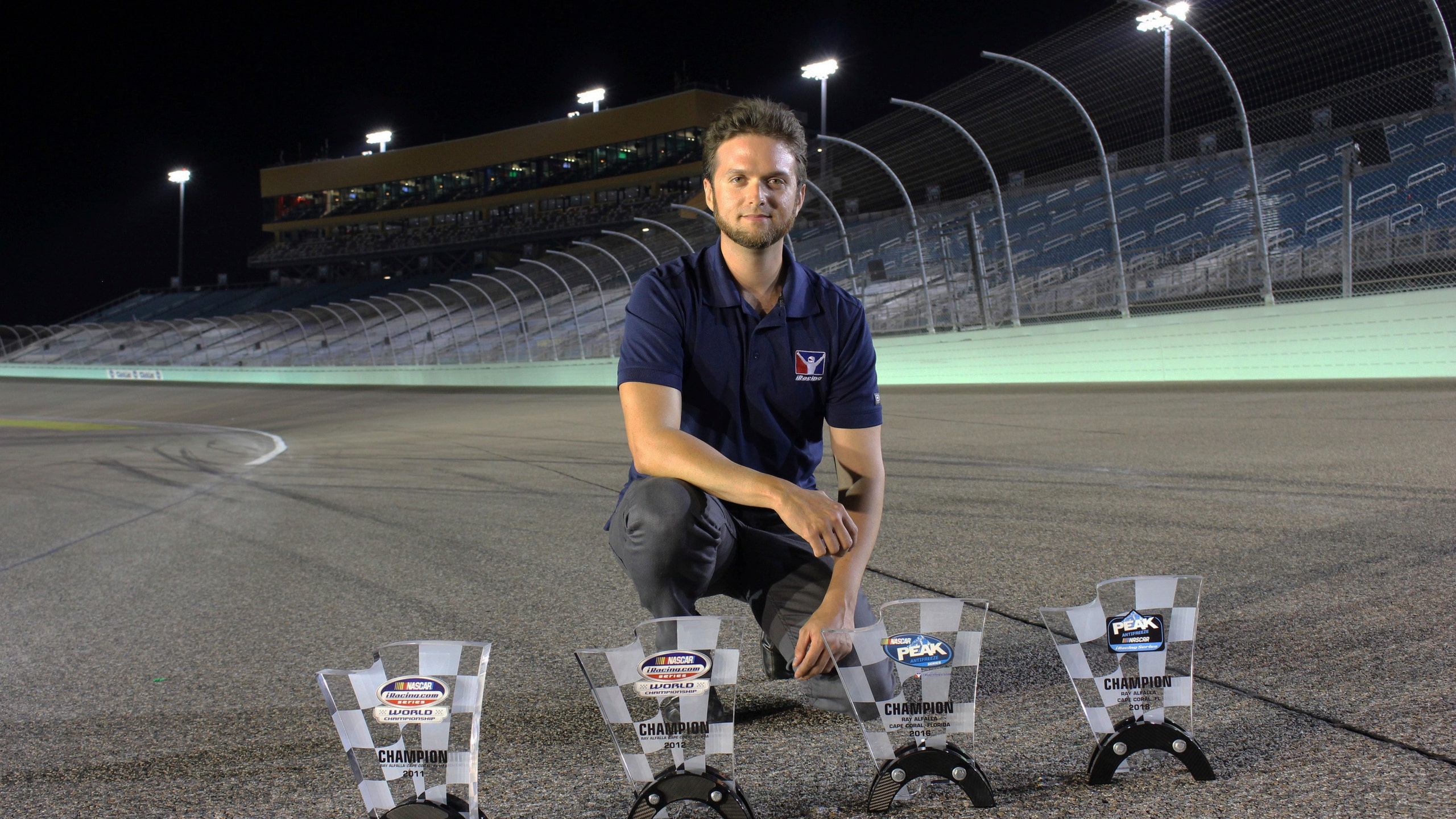 Drivers, connect your Wi-Fi! iRacing a hit in NASCAR

DAYTONA BEACH, Fla. (AP) — Ray Alfalla got hooked on NASCAR in the late 1990s after his family left Cuba and settled in the Miami area. He's the type of die-hard fan the sagging sport craves — a kid who dreamed of racing who's now an adult that settles in each weekend to catch each bump-and run moment.

He rarely misses a race. And for someone who's never worn a firesuit, he's won a few, too.

Alfalla took the checkered flag at Charlotte and Richmond — lost a heartbreaker at Phoenix, once — and he hoisted a championship trophy on the stage at Homestead just like Cup Series star Joey Logano.

Alfalla is in the elite class of drivers who have mastered iRacing , an online simulation of the real deal each week in NASCAR. The paint schemes on stock cars, the cockpit view of thick traffic, the detail of the tracks down to each tunnel turn, bridge and banking, are all so realistic it's like watching a NASCAR race from an in-car camera on broadcast TV.

Dale Earnhardt Jr. plays. So does Denny Hamlin, Bubba Wallace and scores of drivers in the NASCAR garage who grab a wheel for fun and or even use it as a scouting tool for the race ahead. William Byron might be just another shaggy-haired 21-year-old kid in college had he not started iRacing when he was 13. Byron was captivated by the game, which helped spark his passion for real racing and start a career that took him to the pole of Sunday's Daytona 500.

"Does Michael Jordan play basketball without practicing? I think it's the weirdest thing that our sport goes out there with no practice and goes and races," Byron said. "I try to use it as much as I can."

The real stars here are regular fans like Alfalla, a 29-year-old mail carrier who put his stamp on iRacing with the kind of record most drivers would envy: four iRacing championships, 24 wins and $50,000 in career prize money. Alfalla, who started online racing in 2003, said he never raced more than go-karts and found it cheaper to play Mario Kart than chase a NASCAR career.

"You don't need huge funds to go racing," Alfalla said. "You just need a computer and an internet connection."

Beats scrambling for sponsorship just to secure a ride.

Launched in 2008, iRacing is primed for its biggest growth yet. The eNASCAR PEAK Antifreeze Series hiked its prize pool to $100,000 and boosted its credibility with the addition of NASCAR teams that include Joe Gibbs Racing, Wood Brothers Racing and JR Motorports. There was a 40-player draft — the first in iRacing history — and each gamer selected earned a $500 bonus. The Wood Brothers have won at least one NASCAR race in each of the last six decades and NASCAR's oldest team had another first — the first pick of the draft, and it selected, of course, Alfalla .

iRacing President Tony Gardner said there are 85,000 active members spread over dozens of series and the company is turning a profit (though he declined to reveal financials).

"The product is so good now," Gardner said. "It's time to get more eyes on it."

Earnhardt, with his nearly 2.5 million Twitter followers, did his part and plugged the series and the stream on his feed for Tuesday night's season opener . Zack Novak won the race and $1,000 for Roush Fenway Racing at the video version of Daytona International Speedway.

The season is only 18 races long and only the top courses are selected. No repeats. There is a 30-minute qualifying session before each race. The races can be found on iRacing.com, NASCAR.com, Facebook, YouTube and Twitch. Gardner said the best races hit six-figure views but that number was expected to leap with NASCAR's involvement.

Just like in NASCAR, beginners race in low-level series and can advance through the ranks to the elite Peak series. iRacing memberships can start at $6.50 a month or $55 per year and the suggested materials include a force feedback steering wheel and pedals (from $200 to over $1,000) that can be plugged into any USB port. Alfalla says he spends about five hours practicing each week to defend his series championship, which this season comes with a $40,000 prize. Alfalla is currently testing a new steering wheel made by a manufacturer he declined to name.

Not a virtual NASCAR fan? No worries. There are simulation series that include Porsche GT3 cars, the World of Outlaw dirt series, a sprint car series, Rallycross and GTE endurance races.

Parker Kligerman, who has 14 career Cup starts and is trying to qualify for the Daytona 500, is a staunch iRacing advocate and teamed with retired star Jeff Burton to form the Burton Kligerman eSports sim team.

"Our sole mission is to help grow this series," Kligerman said. "It's not like we have the overhead of a real race team with cars and people and such. But we can put our capital behind things that will simply grow the series. It's a pretty cool thing and that's why I think it can be successful."

The sim series skews toward the coveted 18-to-34 demographic, the fan base esports and real sports all are chasing for a share of the entertainment dollar. The top iRacing drivers should get added exposure and a bit of a cool factor if they are affiliated with a NASCAR team.

"It makes everything more real to the drivers," Gardner said. "It's a real sport now with the teams involved."

How real? Kligerman said today's iRacing kids who spend hours behind the wheel could morph into NASCAR's stars of tomorrow.

"I believe that sim racing has the power to lower the barrier to entry in motorsports," he said. "At some point, someone will go from the console game, to iRacing, to the Peak eSports championship to real NASCAR. That will happen. In our lifetime, that will happen."