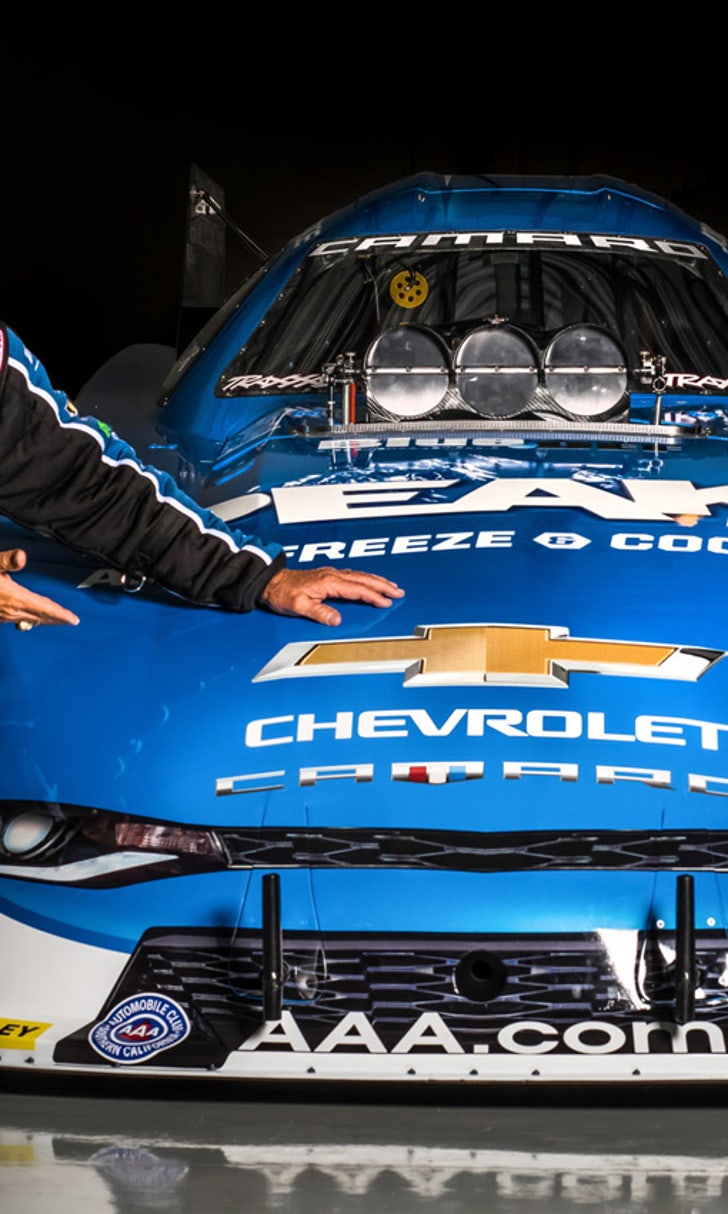 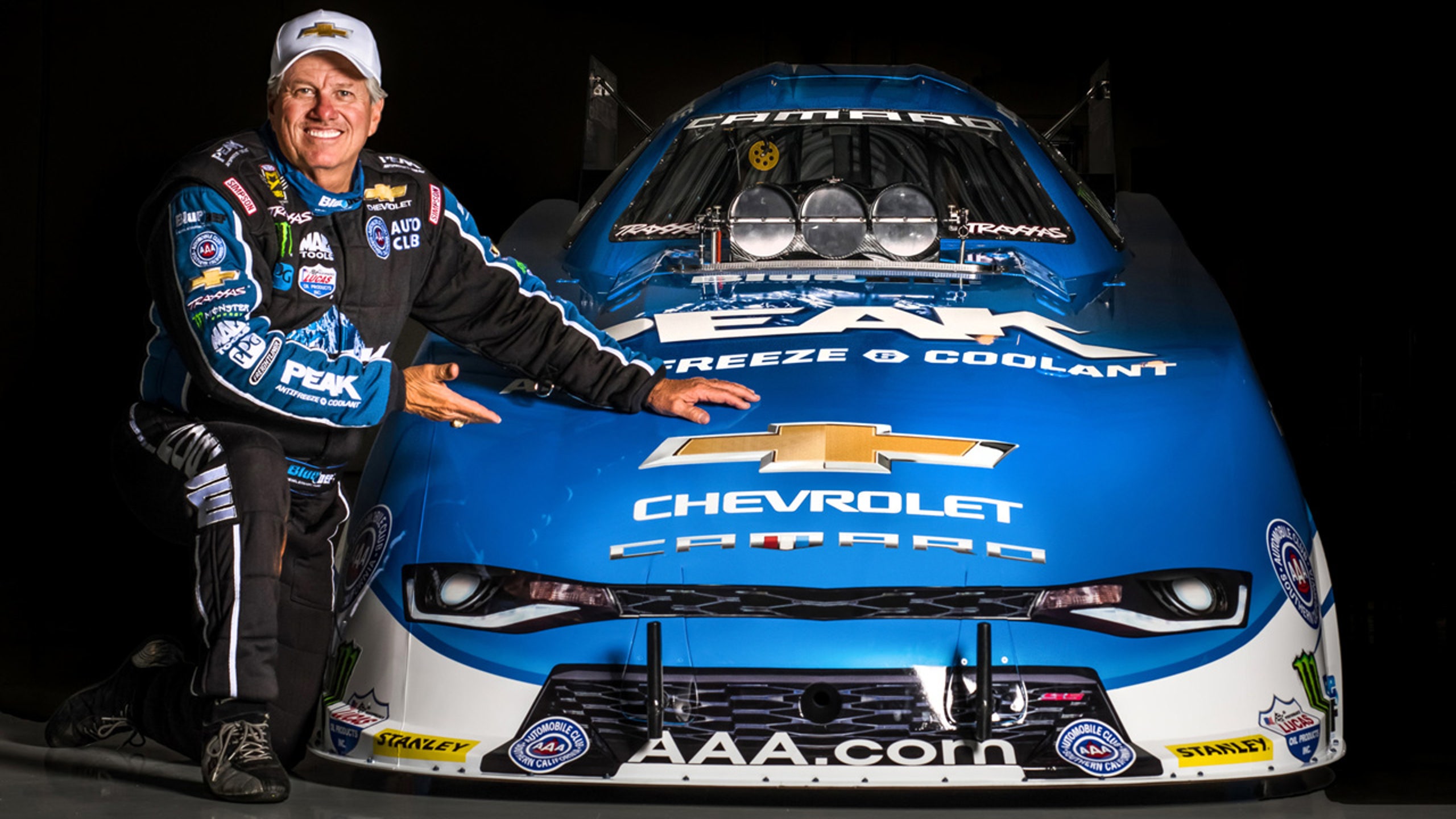 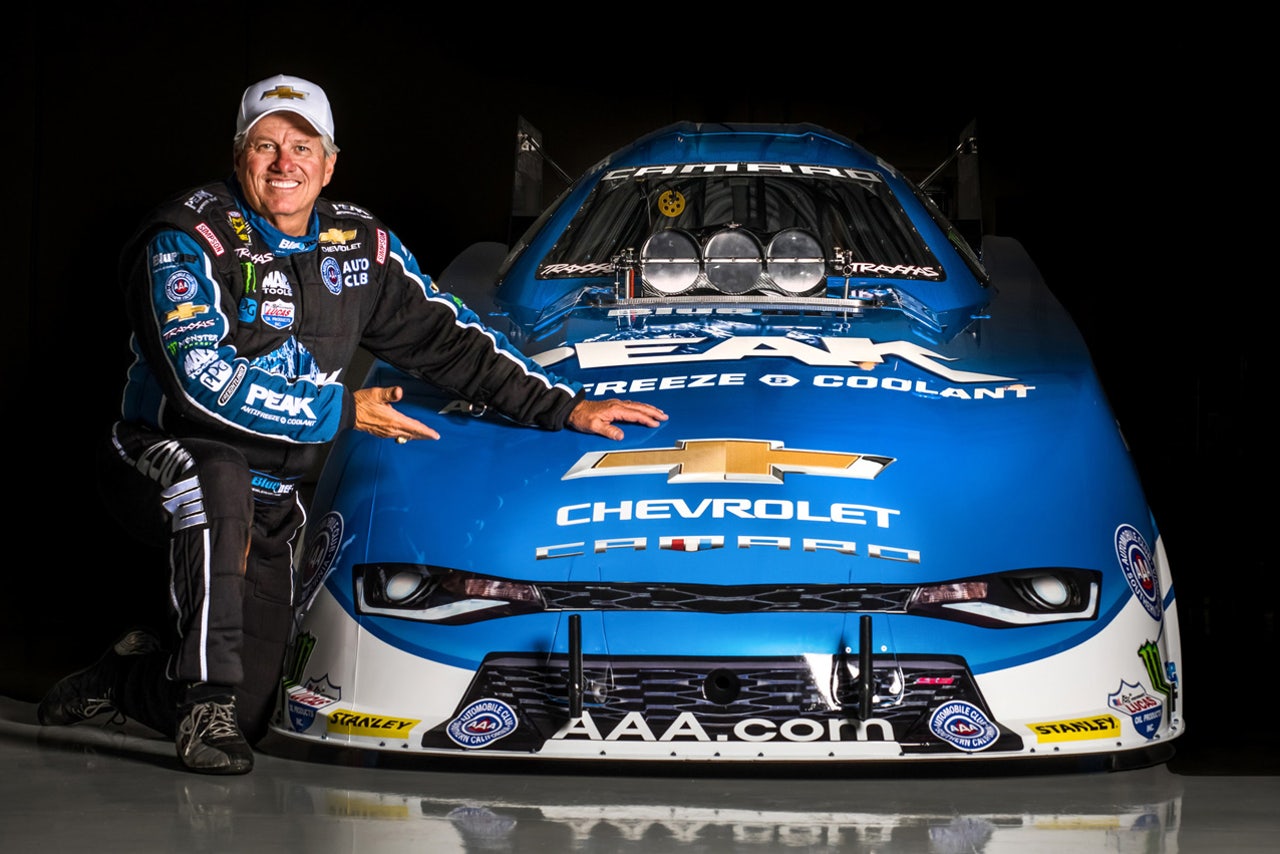 John Force can finally file away the snide remarks.

For the first time since the NHRA drag-racing legend made the switch to Chevrolet at the beginning of 2015, Force will not be driving "Mustaro" or a "Camastang."

The 16-time champion Force and Chevrolet unveiled a brand-new Camaro design during a Tuesday news conference at the John Force Racing shop in Brownsburg, Ind.

“We’re real excited about it; there’s a number of reasons why," Force said. "The car we race on the track is a car that we intend to sell the fans. So we want to be in 100 percent. And Chevrolet took it from the 2015 SS Camaro and went to work on it almost a year ago. Everything was done right."

Force's 2015 version was a carbon-fiber shell modified from its existing Ford Mustang base into a Camaro using the standard bodyline rules enforced by the NHRA.

Force and his team had no other choice but to take this route until the new design was completed. The Camaro SS Force unveiled Tuesday marks Chevrolet's first official, from scratch, Funny Car body since the Monte Carlo introduction in 2004.

“I started my career in a Chevrolet, and I couldn’t be more excited to put this new Camaro SS Funny Car on the track,” said Force. “With all the assistance from Chevrolet, it not only looks great, it’s designed to perform better than anything we’ve had before, with a shape that should help us get down the track quicker and with greater stability.”

The team conducted computational analysis and scale-model wind tunnel testing to help give the new body the airflow management qualities necessary to deliver the downforce required by the 10,000-horsepower supercharged race car, as it accelerates from 0 to 330 mph in less than 4 seconds -- and in a mere 1,000 feet.

Among the unique aerodynamic elements is a new, integrated front splitter that helps direct more air over the body to increase downforce.

Better visibility is an asset which excited Force.

"We have the blower injector out of the windshield; got it out where it belongs," Force explained.  "It doesn’t put the thing right up in your face, but the biggest reason for that was for explosions.

"If it explodes, if the blower comes off, it rips everything out of it, then it’s a body swap. Whereas now, out there, we’ve also built in some new technology to release the air all the way around it when it explodes. Nobody has ever had that."

As Force alluded, the design also incorporates new, dual blow-out – or “burst” – panels, safety devices that relieve underbody pressure to help keep the body on the chassis in the event of an engine failure.

"We have some pretty tricked looking stuff just for safety. I’m proud of it; I’m proud of the way Chevrolet stepped up. First of all, I thank them for giving us a manufacturer to work with. And then to step up and build a car, it’s a big expense. It’s a big project.”

Force confirmed second and third Camaro bodies are destined for Robert Hight and then Courtney Force. The delivery timetable for those bodies is undetermined at this time.

Force will race the very first new body in Topeka, Kan., this weekend, first with Chevrolet livery on it for promotional reasons before converting over to Peak to finish the event.

"Pretty good 'ol race car, but we wanted an original built by us, built for an American by an American; that’s what we did,” Force concluded.

Bobby Bennett is the Publisher/Editor of CompetitionPlus.com, a leading independent online drag racing magazine, since 1999. For the latest in dragster news worldwide, visit www.competitionplus.com or follow on Twitter @competitionplus. 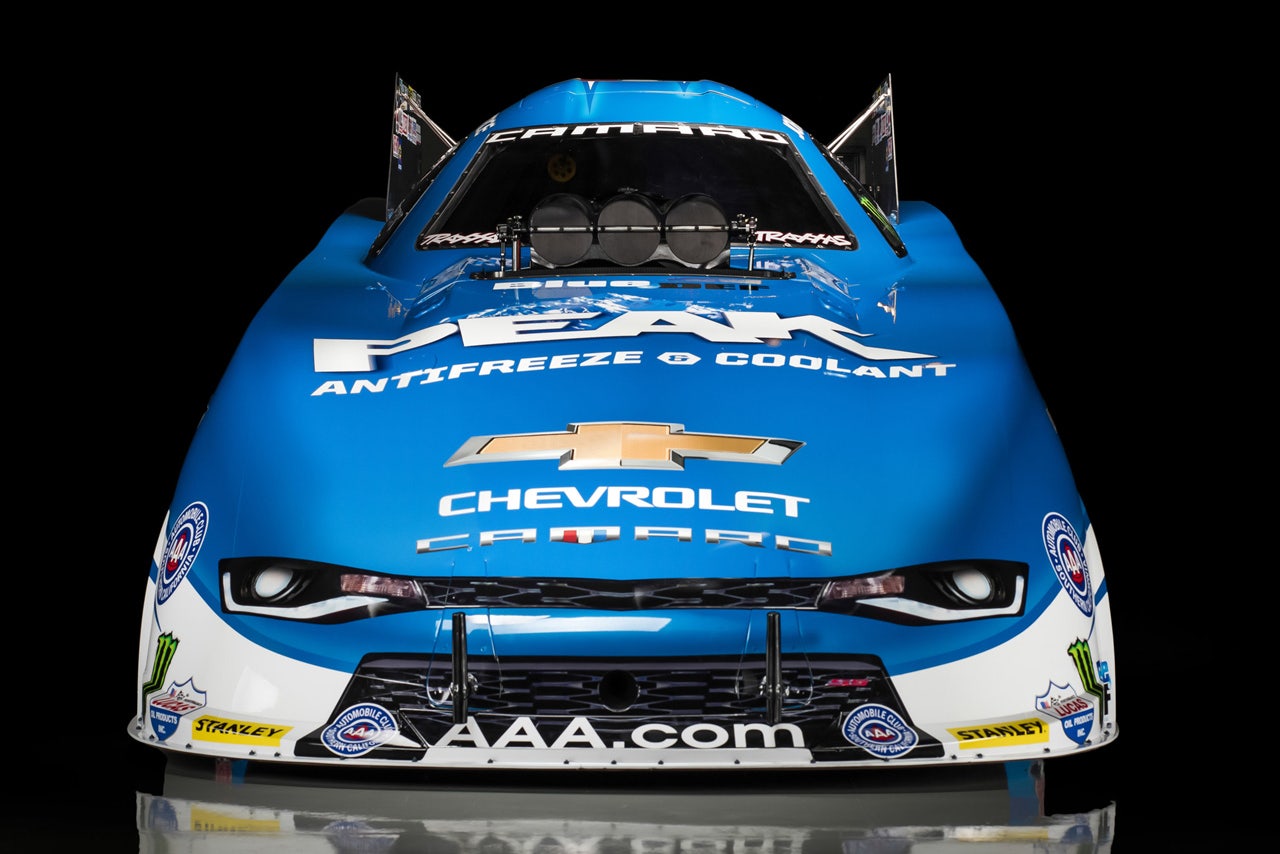 The new Funny Car body is the first based on the sixth-generation Camaro SS. 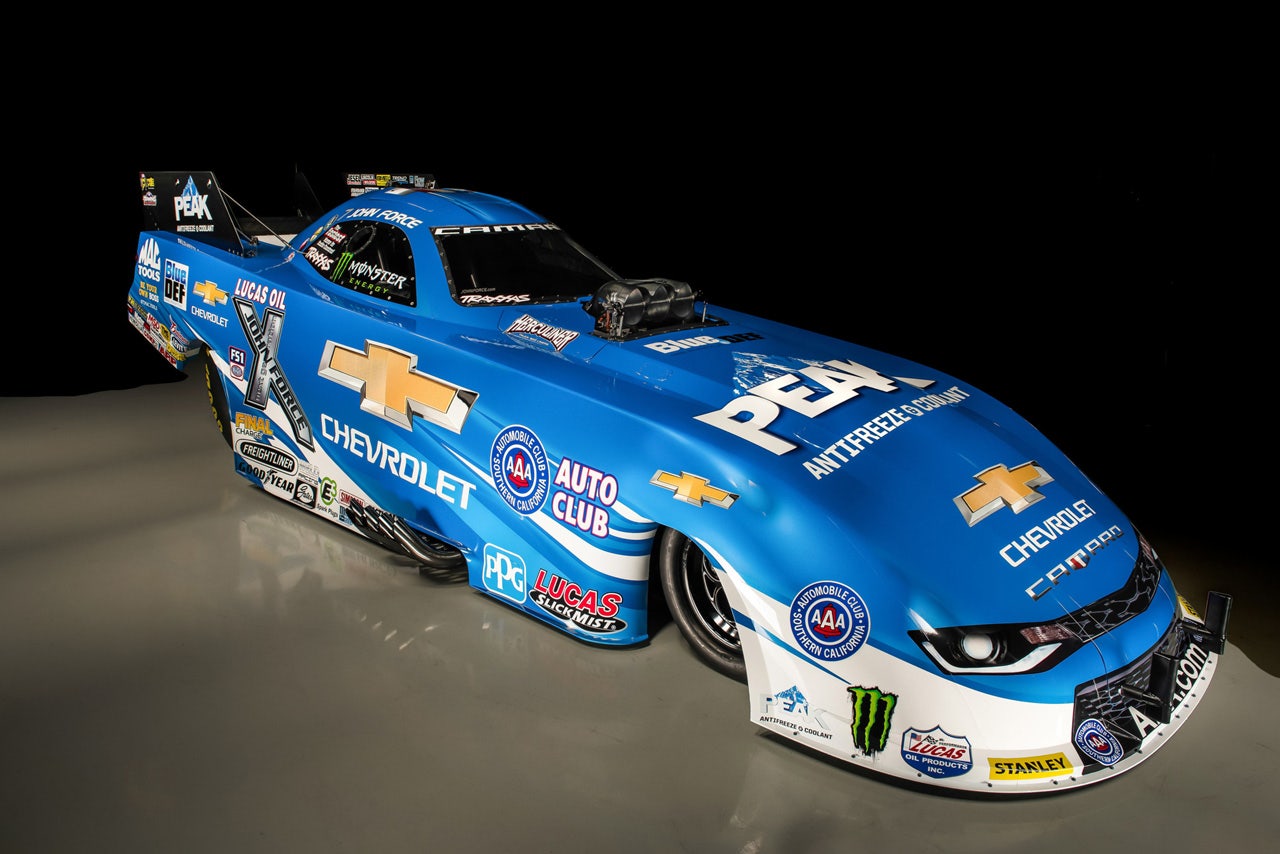 John Force will race the new Funny Car this weekend at the NHRA Kansas Nationals in Topeka, Kansas. 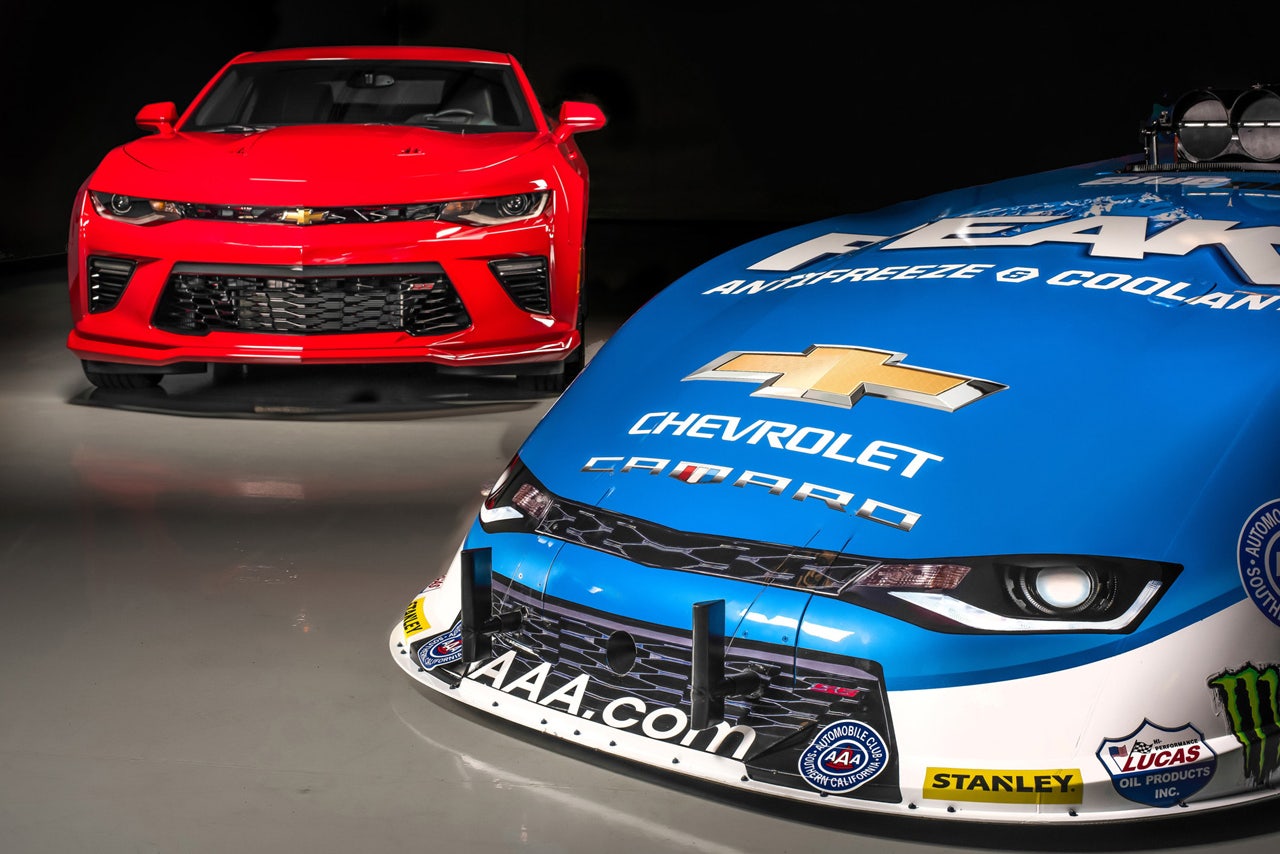 The new Funny Car body is displayed next to the sixth-generation Camaro SS.

Formula One World Championship
share story
those were the latest stories
Want to see more?
View All Stories
Fox Sports™ and © 2021 Fox Media LLC and Fox Sports Interactive Media, LLC. All rights reserved. Use of this website (including any and all parts and components) constitutes your acceptance of these Terms of Use and Updated Privacy Policy. Advertising Choices. Do Not Sell my Personal Info