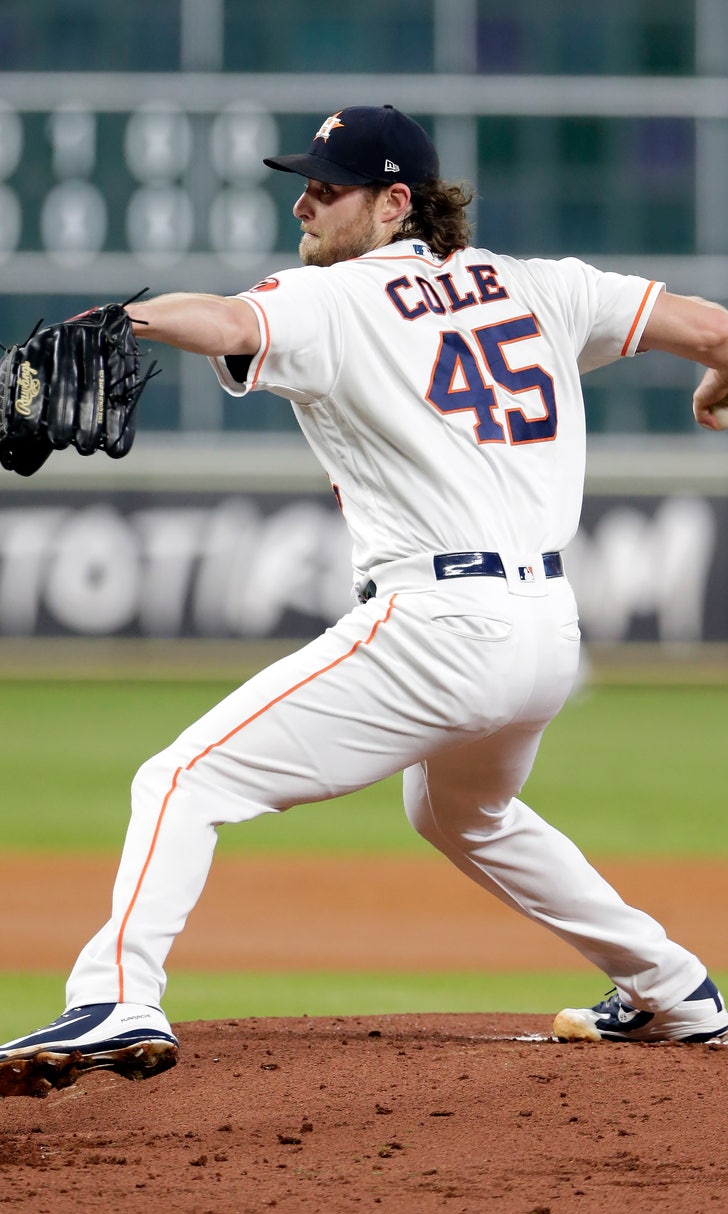 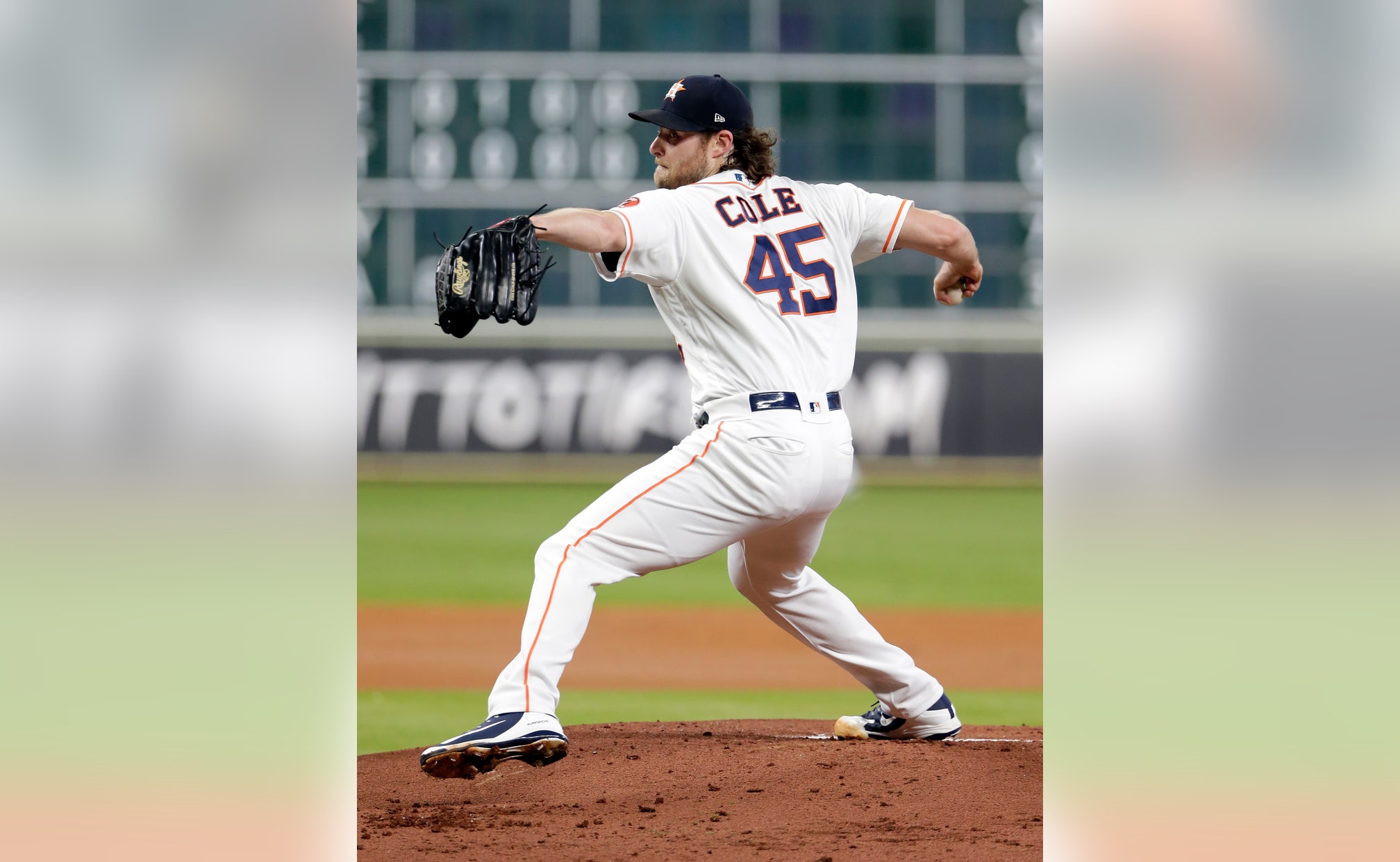 But his offense made sure he didn't take a loss either.

George Springer broke a tie with a bloop RBI single in Houston's three-run seventh inning and the Astros rallied for an 8-6 victory to extend their winning streak to six.

The game was tied at 3-all in the seventh when Joey Wendle tripled off Cole on a grounder to right field. There was one out in the inning when a grounder by Jesús Aguilar skipped just past a diving Aledmys Díaz and into left field for a single to send Wendle home and make it 4-3.

Cole dropped down into a squatting position and pounded his fist into his glove as he saw the ball roll into the outfield.

But the Astros got him off the hook to keep his career-long 11 game winning streak intact with the rally in the bottom of the inning. Diego Castillo (2-8) took over for starter Ryan Yarbrough and walked Yuli Gurriel with no outs. Diaz then doubled on a line drive to left field and Gurriel slid into home just in front of the tag to tie it up again.

There was one out in the inning and runners on first and second when Springer knocked a ball into shallow center field. Second baseman Eric Sogard sprinted and dived to try and grab it but it dropped just past him to allow a run to score and Houston to take a 5-4 lead.

"We played good defense and we were forced to answer a few blows by them and credit to them for those blows," Cole said. "When you play good teams you're not going to be able to be perfect, especially when they put good swings on good pitches. So for us to answer back and to keep the pressure on as we get deeper into the game is what we need to do."

Jose Altuve then grounded into a force out that left Springer out at second. But Sogard, who struck out four times Wednesday, threw the ball into the Astros dugout for an error while trying to turn a double play, sending another run home.

Alex Bregman had three hits and an RBI and Gurriel hit a two-run homer which tied it in the fourth. The Astros tacked on two more runs in the eighth on an RBI single by Martin Maldonado and a bases-loaded walk.

Cole allowed six hits and four runs in 6 1/3 innings, but did not factor into the decision.

"He throws every pitch with intensity," Hinch said. "I think it's too generic to say he's really focused now early but he comes out and sets a tone that is close to second to none."

He struck out 14 to tie a season high and set a franchise record with his 15th double-digit strikeout game this season, besting J.R. Richard who had 14 such games in both 1978 and 1979.

Will Harris (4-1) struck out three in 1 1/3 scoreless innings for the win. Roberto Osuna allowed a two-run homer to Willy Adames with one out in the ninth to cut the lead to 2, but retired the next two batters to end the game.

"I thought his game plan was really, really good," manager Kevin Cash said. "You don't make that lineup go quiet for five and six innings like he did without having some good stuff. Mixing and changing speeds and he did that again tonight."

Cleanup hitter Ji-Man Choi hit a two-run homer, but the top three batters in Tampa Bay's lineup went 1 for 12 with 10 strikeouts as the Rays lost their fourth in a row.

Cole walked Choi to start to start the second and he advanced to second base on a balk. He took third on a wild pitch before the Rays took a 1-0 lead on a sacrifice fly with one out by Wendle.

Choi's homer to the bullpen in right-center came with one out in the fourth to make it 3-0.

Houston cut the lead to 2 in the fourth on an RBI single by Bregman. Gurriel's home run came with two outs in the inning to tie it at 3-all.

Rays: CF Kevin Kiermaier was out of the lineup for a second straight game with rib pain after being injured on Sunday. The Rays hope he can return on Thursday.

Astros: RHP Brad Peacock was placed on the injured list with right shoulder soreness on Wednesday. Hinch said he doesn't think the problem is serious but wanted to give him time to rest and get over it in hopes of having him healthy as the regular season winds down and the playoffs approach.

RHP Zack Greinke (14-4, 2.83 ERA) will start for Houston in the series finale on Thursday. Greinke is 4-0 with a 2.45 ERA in four starts since a trade from the Diamondbacks on July 31. The Rays have not announced a starter.