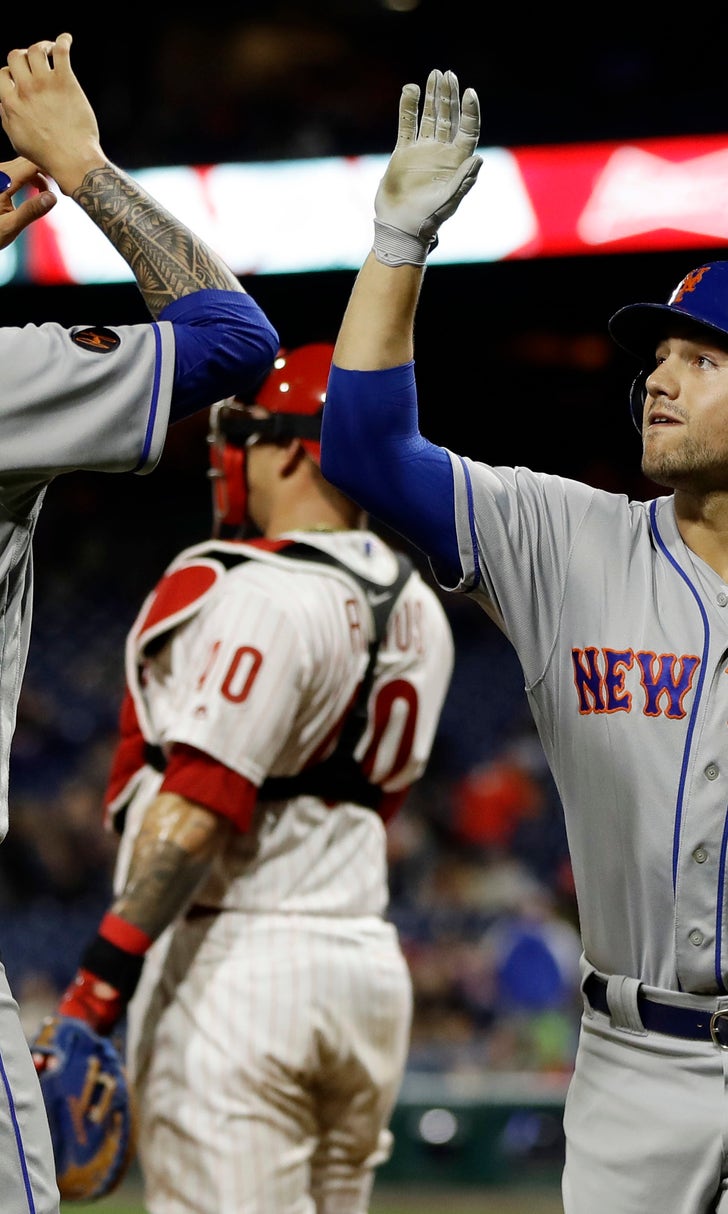 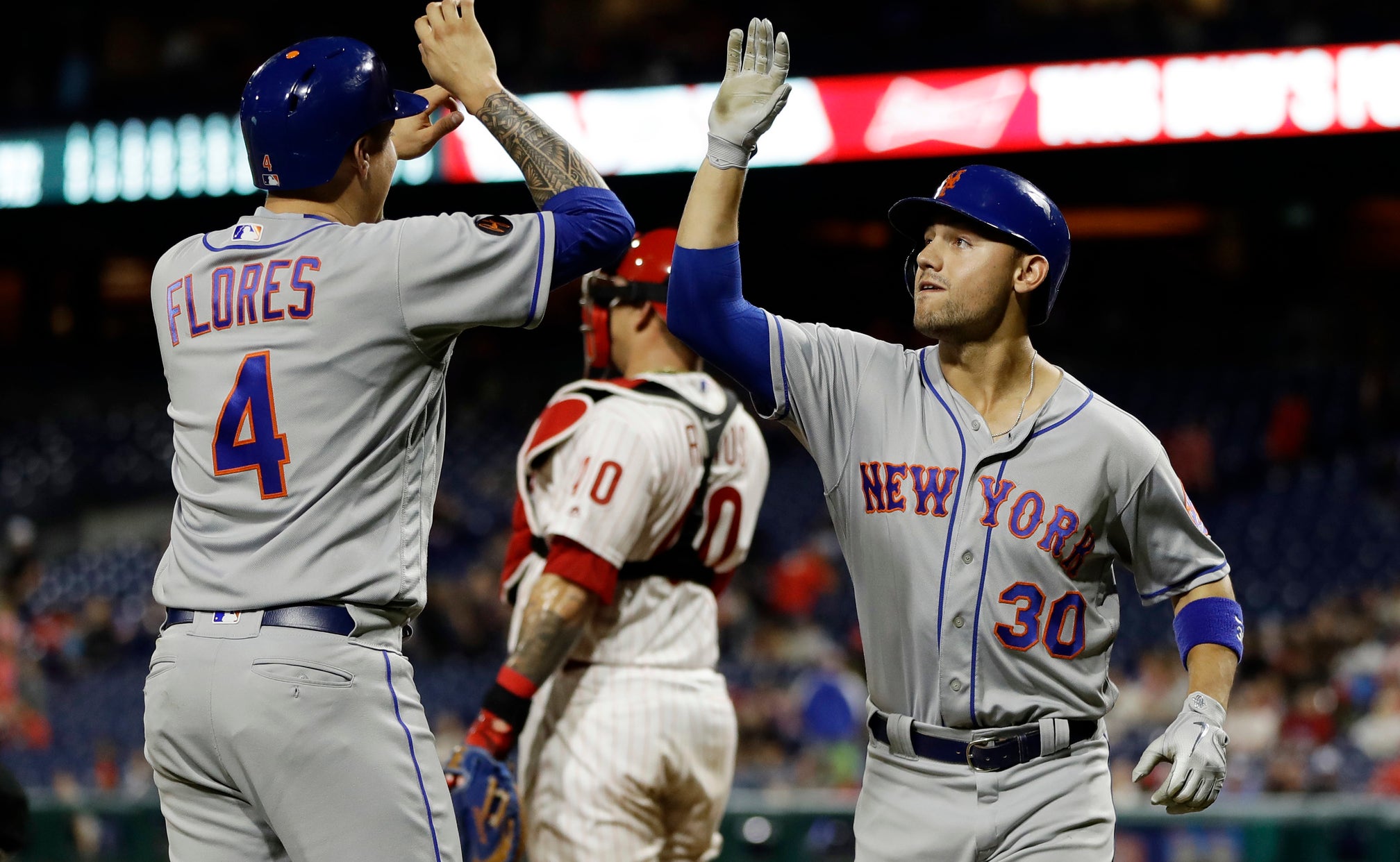 PHILADELPHIA (AP) — If this was it for Zack Wheeler, he finished strong and — probably most importantly — healthy.

Wheeler pitched seven solid innings for his career-best 12th win in what may have been his final start of the season, Michael Conforto had a career-high six RBIs and the New York Mets beat the fading Philadelphia Phillies 9-4 on Monday night.

Wheeler (12-7) allowed four runs and three hits to become the first Mets pitcher since Steve Trachsel in 2001 to record nine wins after the All-Star Game. Since the break, the right-hander is 9-1 with a 1.68 ERA in 11 starts.

New York was eliminated from playoff contention Monday night when St. Louis beat Atlanta. Callaway wants to be cautious with Wheeler and said he would discuss with Mets management whether he makes another start.

The right-hander is three innings shy of his career best, the 185 1/3 he threw in 2014 before injuries halted his promising career. Wheeler didn't pitch at all in the majors in 2015 or 2016 following Tommy John surgery, and was limited to 86 1/3 innings last season due to a stress reaction in his pitching arm.

"We want to make sure we're taking care of the player," Callaway said.

Wheeler, who opened the season in the minors, is relieved to be pitching and feeling so well.

"It's been smooth sailing for the most part this year," he said.

Asked if he wanted to continue to pitch, Wheeler said, "Still feeling good. It's not my call. I'll leave it up to those guys."

Conforto, after a rocky start, also is feeling good. The Mets outfielder already has 22 RBIs this month, giving him 75 for the season.

"If I put the work in and stayed positive, I knew at some point it would come around," he said. "It feels like I'm not searching so much. It took five months I guess, but I finally got it."

Conforto had a two-run single in the fifth, an RBI double in the seventh and a three-run homer in the ninth for the Mets, who have won seven of 11 and are 26-17 over their last 43 games. Conforto has 45 RBIs since the All-Star break, second-most in the NL over that span behind Milwaukee's Christian Yelich.

"This is the Michael Conforto everyone wants to see," Callaway said. "This is one of the better players in the league when he's going like this."

The Phillies, as a team, have been heading in the opposite direction.

J.P. Crawford had a three-run triple for the Phillies, whose slim playoff chances took another hit. Philadelphia is 6½ games back of first-place Atlanta in the NL East and five games out of the wild card. The Phillies have lost eight of 11.

Conforto's two-out double in the seventh off Tommy Hunter (4-3) snapped a 4-all tie and helped the Mets continue their mastery of Philadelphia.

Wheeler didn't allow a hit until Wilson Ramos' leadoff single in the fifth that caromed off the glove of diving second baseman Jeff McNeil and into short right field. Wheeler then gave up a single to Nick Williams and hit Odubel Herrera with a pitch to load the bases. Crawford cleared them with a triple to right, and Cesar Hernandez's sacrifice fly scored Crawford to tie it at 4.

The Mets took a 4-0 lead against Jake Arrieta. Austin Jackson's RBI double in the second got New York on the board, and the Mets scored three more runs in the fifth on Amed Rosario's sacrifice fly and Conforto's single to center.

Arrieta was tagged for four runs and nine hits in five innings.

Philadelphia's Carlos Santana walked in the second inning to reach 100 for the season for the third time in his career. He has 101 walks after a sixth-inning free pass.

Phillies: 3B Maikel Franco (neck) missed his fifth straight game. Kapler said he expects Franco to return in two or three days. ... Williams (shoulder) returned to the lineup after sitting out the last three games. . INF Asdrubal Cabrera left in the fifth inning with a left calf strain. He will be re-evaluated on Tuesday.

Zack Wheeler
share story
those were the latest stories
Want to see more?
View All Stories
Fox Sports™ and © 2020 Fox Media LLC and Fox Sports Interactive Media, LLC. All rights reserved. Use of this website (including any and all parts and components) constitutes your acceptance of these Terms of Use and Updated Privacy Policy. Advertising Choices. Do Not Sell my Personal Info