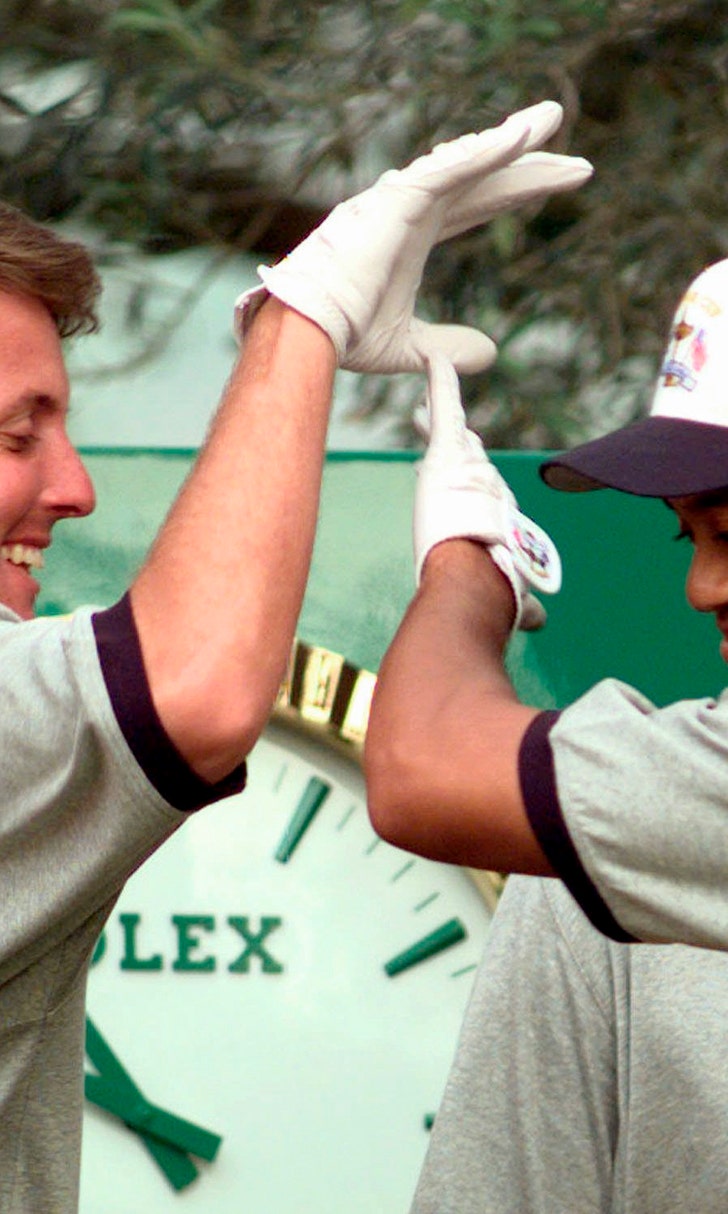 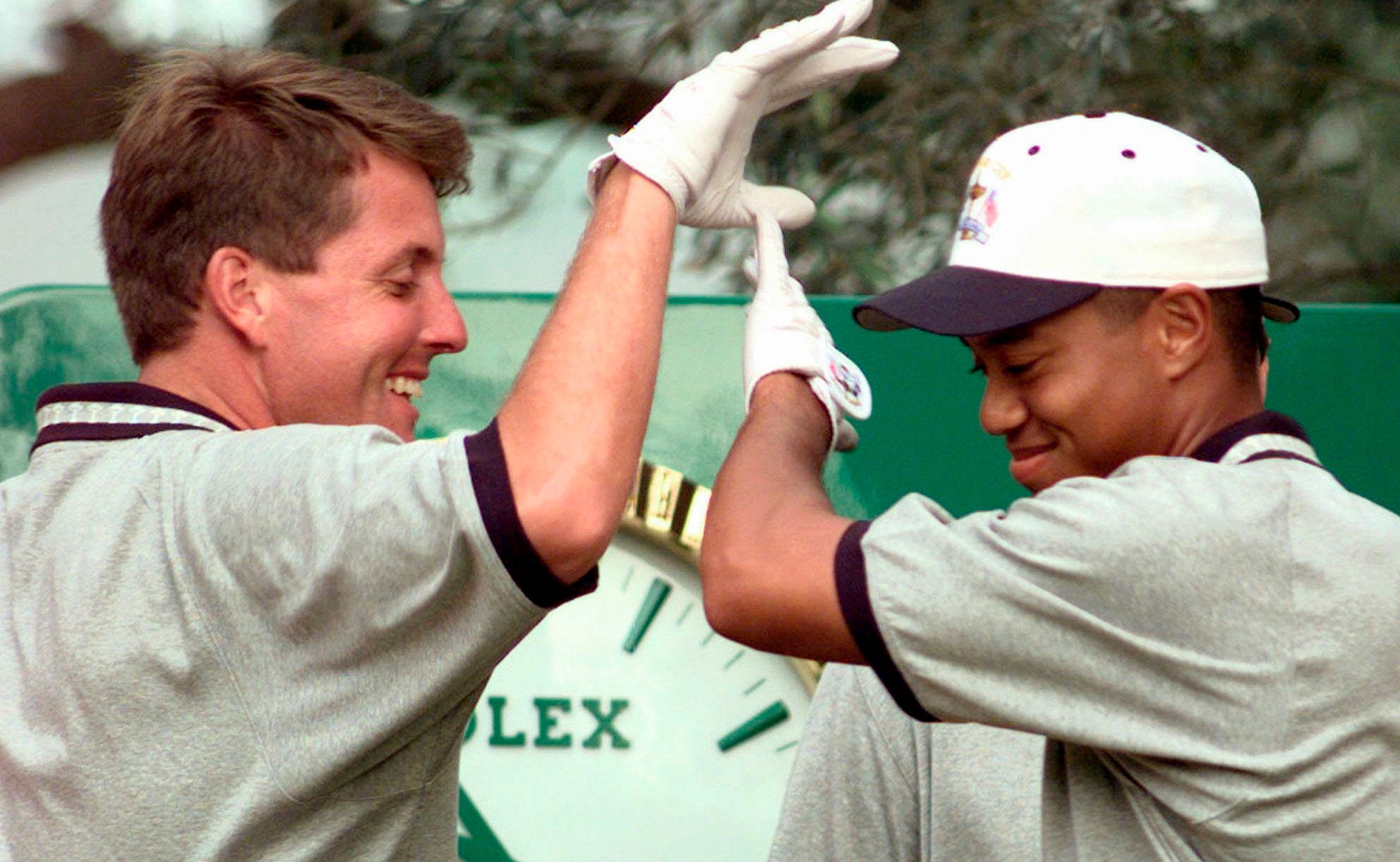 Mickelson gets a final try at winning Ryder Cup in Europe

ATLANTA (AP) — Keegan Bradley was never more nervous than the moments before his Ryder Cup debut. He had the opening tee shot in foursomes at Medinah against Sergio Garcia and Luke Donald, a European tandem that had never lost in four matches against some of America's best players.

"I was worried I would not be able to hit the ball," Bradley said.

At least he had the calming influence of his partner, Phil Mickelson, the most experienced American on the team.

"Phil walks over to me and says, "Listen, I don't want an 8- or a 9-iron into this green. I want a sand wedge,'" Bradley said. "It made me laugh, and I absolutely hammered that drive. He had a sand wedge and we made birdie."

Mickelson is 48, the oldest player on the U.S. team that travels to France to try to end 25 years of losing the Ryder Cup on European soil. He is No. 25 in the world, the lowest ranking of the 12 Americans on the team. He has one victory in the last five years and 113 starts on the PGA Tour.

It's hard to imagine a Ryder Cup without him.

And the five-time major champion has never wanted to be on a Ryder Cup team more than this one.

"It's obvious that the one thing that has been missing is for our team to go over to Europe and win," Mickelson said "I've very excited about the team this year. I'm excited to be part of this team. We have some incredible players, great leadership and a really special opportunity to do something we haven't done in a long time."

He's had five chances to be part of a winning team in Europe, including 2002 when he lost a key singles match to Phillip Price, the No. 119 player in the world. What makes this so significant, beyond the record he set for playing on his 12th team, is that he might not get another.

"This is most likely my last chance to go over to Europe and to be a part of a winning U.S. team," he said.

He is the oldest player at Le Golf National. He finished 10th in the Ryder Cup standings with only one victory over the last five years, the first time he has failed to qualify.

He was an easy choice as a captain's pick.

"He's someone that knows the inner workings of our team room and provides a spark," U.S. captain Jim Furyk said. "I think he's a lot of fun in the team room and has a knowledge of the other players that will significantly help a lot of folks on our team."

One possible pairing is Tony Finau, one of three Ryder Cup rookies for the Americans.

Mickelson has taken on seven players who were Ryder Cup rookies over the years, from David Duval at Brookline to Anthony Kim at Valhalla to Dustin Johnson at Celtic Manor and most recently Bradley at Medinah.

That comes from time, and that might be Mickelson's greatest legacy.

As stellar as he has been in his career — 46 victories worldwide, five majors — Mickelson has always had to settle for second-best of his generation behind Tiger Woods. Lefty has never reached No. 1 in the world. He has never won a PGA Tour money title, a FedEx Cup or a scoring title. He has never been player of the year.

But he has one record Woods can't touch, and it will be tough for anyone to match.

He qualified 11 straight times for the Ryder Cup. His 12th appearance is more than any player, breaking Nick Faldo's record of 11.

"I knew how special Phil was when we were kids and playing in college," Furyk said. "But to be able to play at that elite level for as long as he has, to be that consistent for 25 years, is an impressive feat and one that will be very difficult to be equaled."

Mickelson's first one was in 1995 at Oak Hill, when he won matches with Corey Pavin and Jay Haas and won his singles match for a 3-0 debut. Over the years, he has had 55 teammates in the Ryder Cup, from Curtis Strange and Ben Crenshaw to Justin Thomas and Bryson DeChambeau.

Seven of them went on to become captains. He has had 15 partners in team sessions.

"That was probably the first time I was around him socially," Curtis Strange said of the '95 matches. "I got to see the Phil that everybody loves in the locker room. He had that boyish humor and was full of energy to play — not play golf, just play."

Mickelson has only been part of three winning teams — 1999, 2008 and 2016 — and while he holds the record for most Ryder Cups, his legacy can be cemented if the Americans return home from France with the trophy.

No matter what he does inside the ropes, Mickelson would be a big part of that from the last Ryder Cup in Europe.

For a guy whose career was built upon high-risk shots, no risk was greater than speaking out publicly after the 2014 loss in Scotland against one of the game's most popular figures — Tom Watson — and criticizing the PGA of America for going away from a formula that worked.

It led to a Ryder Cup Task Force, and Mickelson had the strongest voice. What emerged was a system that gave players more input on how the captains are picked, how the players qualify for the team and how to develop continuity.

And now it's time to talk with his clubs.

Mickelson has plenty at stake at Le Golf National. He calls it an opportunity, but it probably will be his last one.

One thing hasn't change, no matter the history. Mickelson is not afraid to fail.

"He knows where he will stand in the history of the game, possibly the top 10 of all time," said Tom Lehman, a Ryder Cup rookie with Mickelson in 1995 and his captain in 2006 in Ireland. "He has confidence and belief in himself, and with that comes a lot of swagger and a lot of ability to be Phil and not worry about anything."