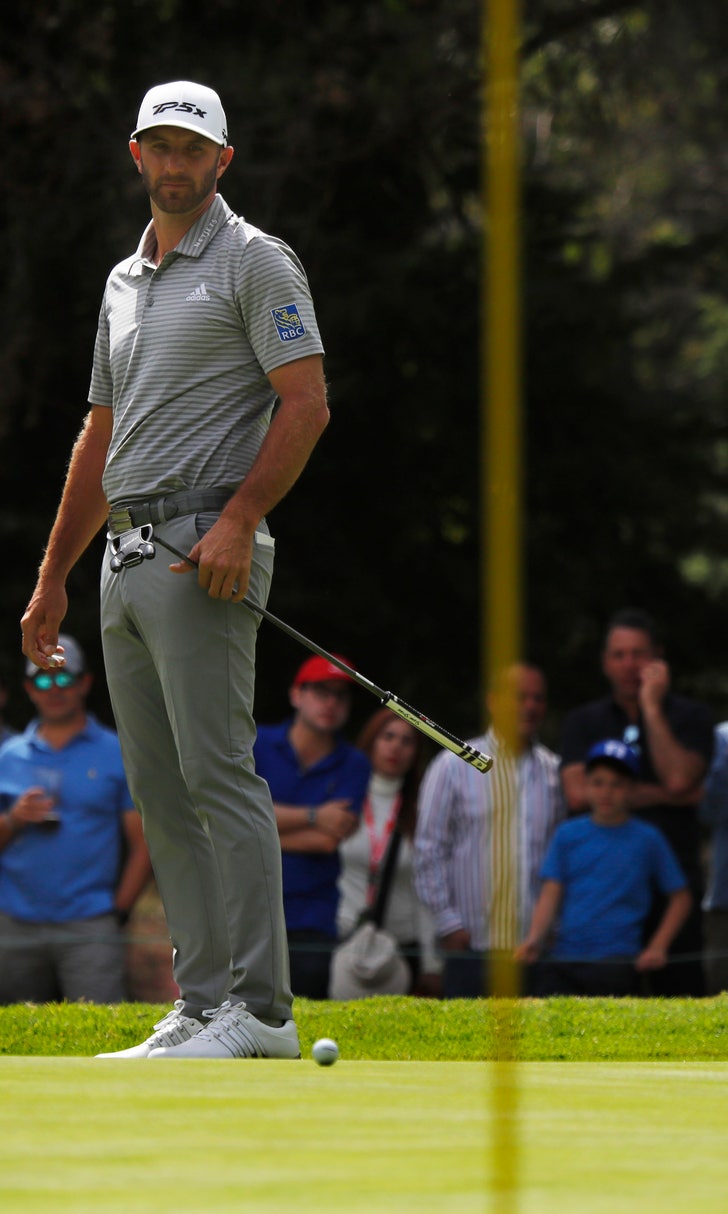 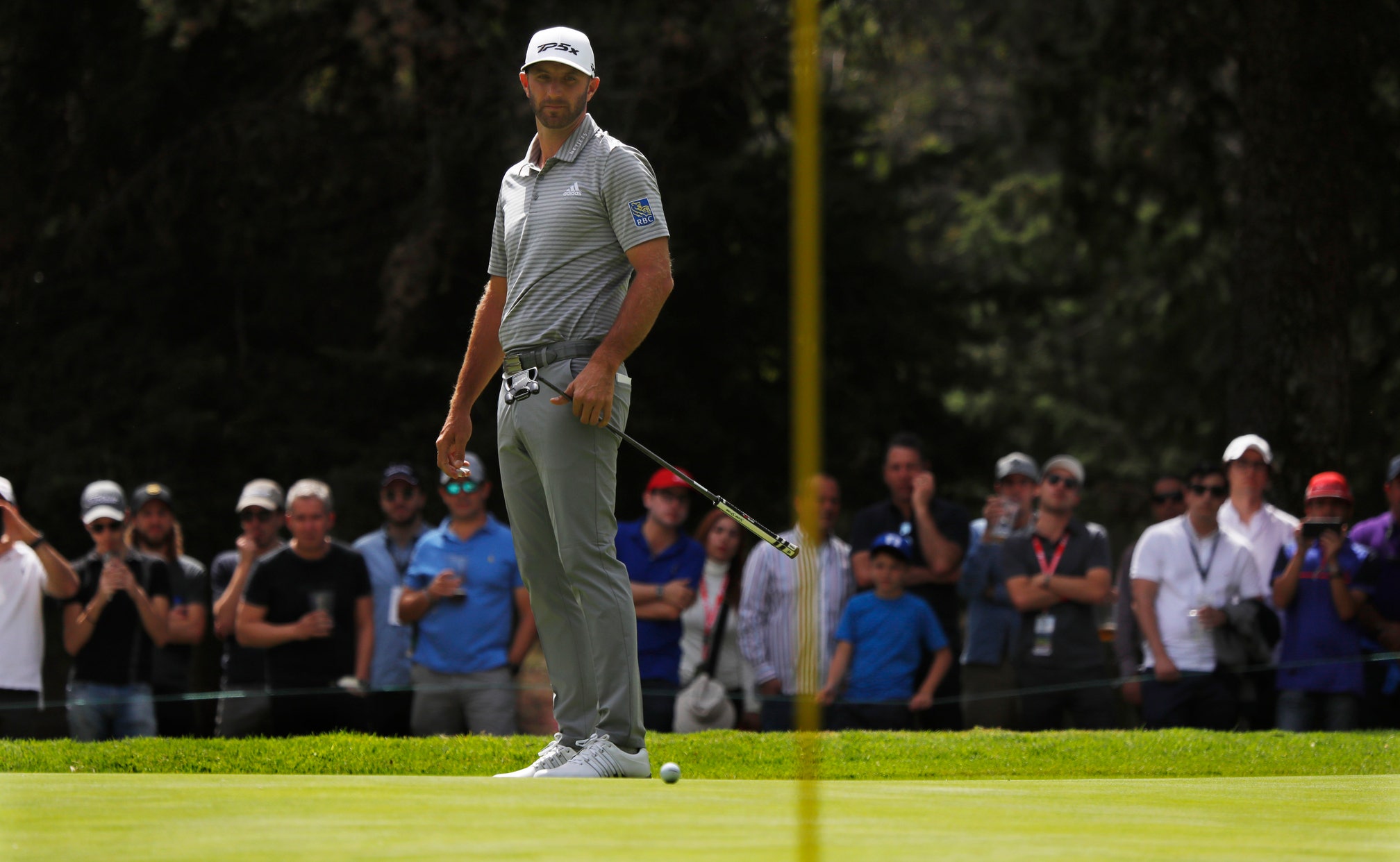 MEXICO CITY (AP) — Tiger Woods delivered the shot that had the gallery buzzing. Dustin Johnson produced the golf that left everyone chasing him.

Johnson made it through another round at the Mexico Championship without a bogey, and he was so efficient Friday that he putted for birdie on every hole, one of them from just on the fringe. It added to a 4-under 67 and a two-shot lead over Rory McIlroy and Matt Kuchar going into the weekend.

The memorable moments belonged to everyone else, not all of them good.

Woods started to figure out Chapultepec Golf Club a little better in his second full round and made a collection of medium-length birdie putts for a 66 that got him back in the game, though still six shots behind.

He would have liked one more, especially with the shot he hit at the end of his round. From a bunker right of the ninth fairway, a tree in his path, Woods sliced a 9-iron from about 130 yards that caught the left side of the green with so much spin that it zipped sideways at the pin and rolled 10 feet by. He settled for a par.

"The ball was sitting down just enough where I didn't think I could clear that tree," Woods said. "I ended up going back to the 9-iron and realized, 'Geez, I've really got to slice this thing.' So I opened up and gave it as much of a cut motion as I possibly could. And it worked out."

Johnson was at 11-under 131 on a course where he won two years ago, when he was No. 1 in the world and playing the best golf of his career. Johnson feels he is heading in that direction again, and the course suits him — not for the length or how far he hits it in altitude, but for the thinking required.

"It makes you focus. You've got to think," he said. "And you're doing a lot of calculations with the numbers and trying to figure out how far the ball is going to actually go. So I enjoy it. It's pretty narrow, but it's tree-lined, so I do like that."

McIlroy (70) appeared to be the one to chase when he started with two straight birdies. He lost one shot when he went for the green on the par-5 sixth and his shot caromed off the hill and into the water. The real trouble came at No. 9 when he had a 15-foot birdie putt from the fringe. He ran it by the hole, caught the lip on his par putt and saw it roll just under 5 feet away, and he missed again. Four putts from 15 feet led to double bogey, and McIlroy's momentum was gone.

His attitude didn't change, though. He was two off the lead and liked where he was.

"It's funny, I had breakfast with a few of the boys that played later yesterday and they said it was going to be hard to hole putts in the afternoon, and they were right," McIlroy said. "I had a couple go the opposite way on me. I missed a couple short ones. But overall, I stayed patient. After I made the double on 9, I sort of righted the ship and made a lot of pars and made one birdie.

Kuchar, going for the Mexican double having won the Mayakoba Classic last fall, started with four straight birdies on his way to a 67. But it was the guy in his own group, Tommy Fleetwood, who had the best start of the day.

Fleetwood drove onto the green at the par-4 opening hole and made a 20-foot eagle putt. He hit driver on the 384-yard second about 40 yards from the green, picked his spot and knocked that in for a second straight eagle.

It was the first time a player started a round eagle-eagle on the PGA Tour since Sean O'Hair in 2009 at this World Golf Championship when it was at Doral.

How about three in a row? Next for Fleetwood was a par 3.

"I missed the green," he said.

He wound up with a 65 that catapulted him into a tie for fourth with Sergio Garcia (66), four shots behind.

Rickie Fowler had a 73, a reasonable score considering he had a triple bogey and a double bogey on his card, one shank that he couldn't imagine hitting and one penalty that left him fuming about the new rules.

Fowler hit a high shank with a wedge on the 10th hole, his first of the day, over the fence. But when he went to drop, he forgot the new rule requires a drop to be made from the knee. He dropped from the shoulder, realized his mistake on the green and received a one-shot penalty.

"It's on me. I took the shot. It was no big deal," Fowler said. "But I think with the new rules that have been put in place, it's not doing any favors for our sport."

He said it was "terrible" new rule and expects it to be changed.