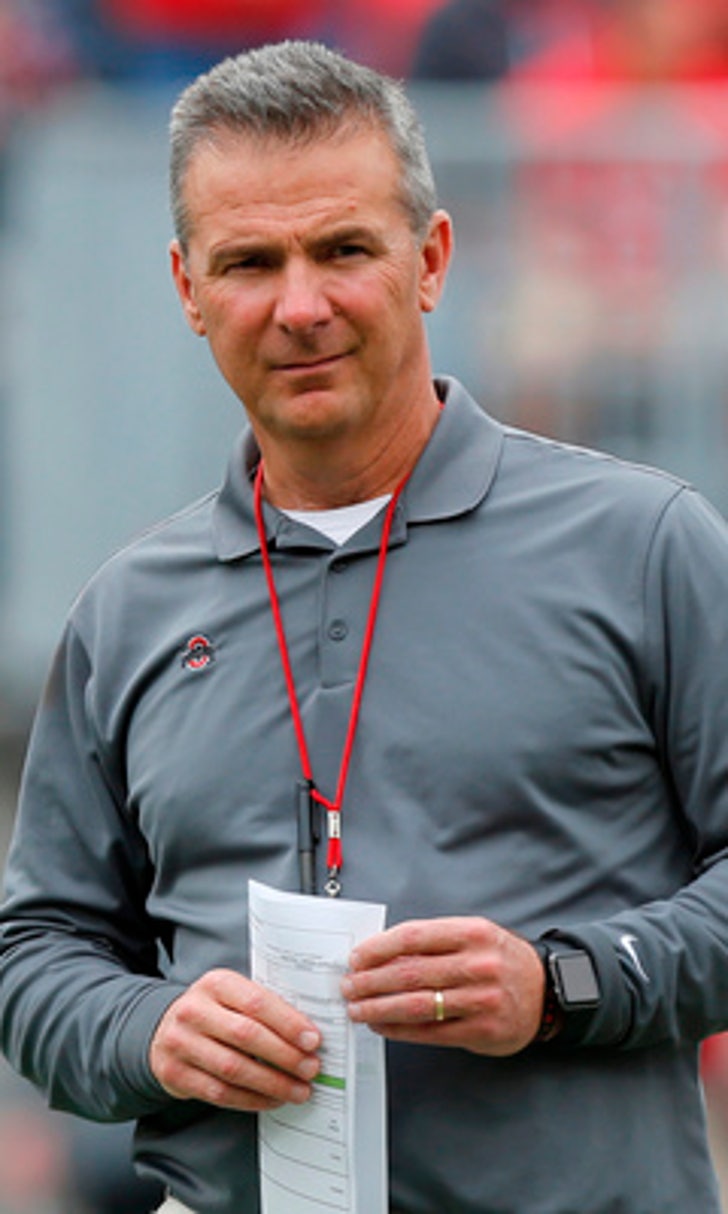 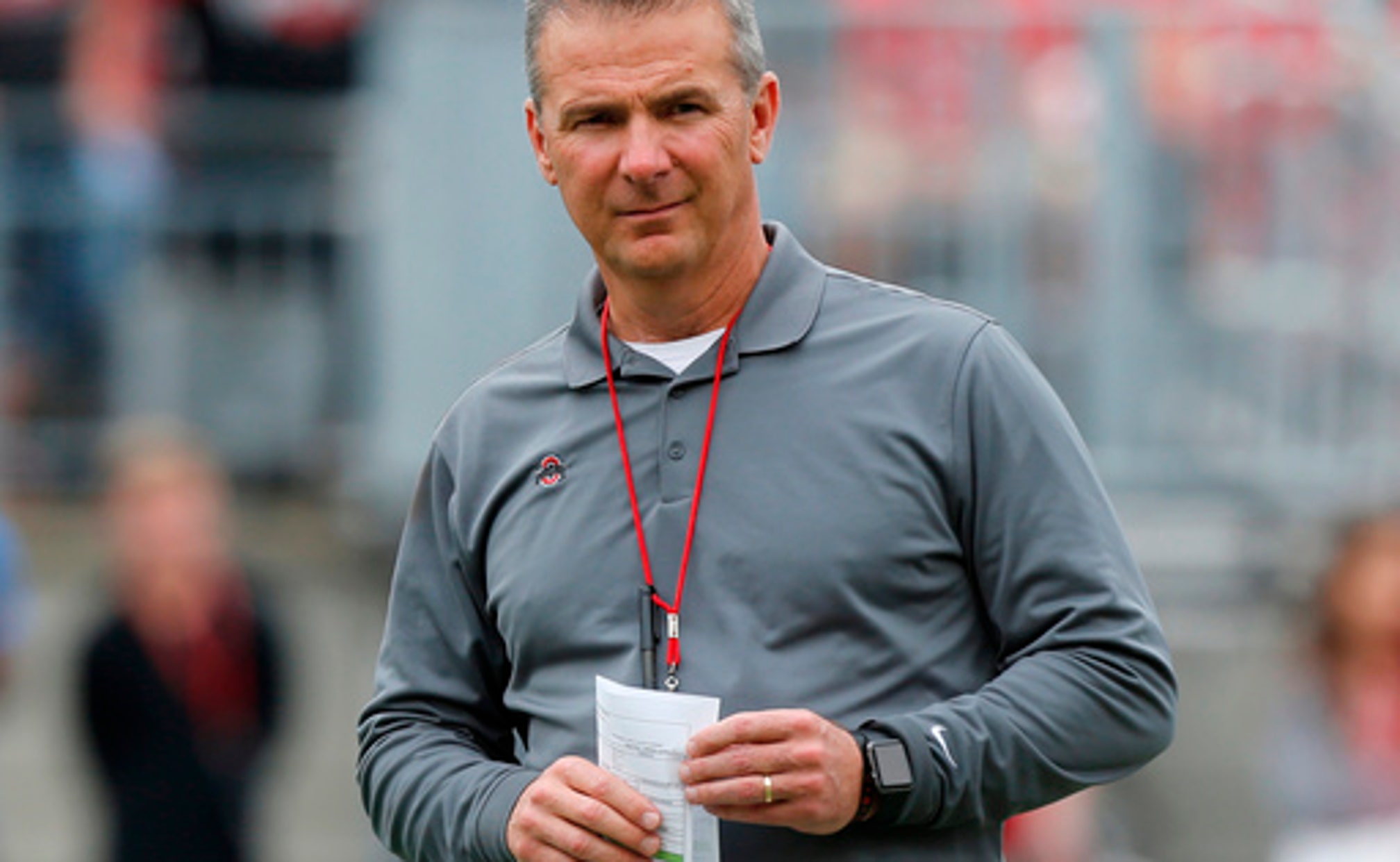 The Latest: Ohio State to open camp with Meyer on leave

The university released a statement Thursday night announcing the formation of the six-member ''independent board working group.''

Meyer was put on paid administrative leave on Thursday following a report that Meyer's wife Shelley knew about 2015 abuse allegations against former assistant Zach Smith made by his then-wife Courtney. Meyer told reporters he didn't know about the 2015 allegations until just before Smith was fired last month.

The university is trying to determine what Meyer knew and when he knew it, and if he failed to report the allegations against Smith to officials.

Former Ohio State linebacker Chris Spielman says the school's only choice was to put coach Urban Meyer on paid leave during an investigation over the handling of a longtime assistant who has been accused of domestic violence.

Spielman says Meyer needs and deserves to be heard from at the appropriate time, adding that Urban and Shelley Meyer are great people who do a lot for the community.

The former NFL linebacker and TV analyst says Meyer knows Ohio State's program is bigger than any one individual.

Meyer is on leave while Ohio State investigates what he knew about 2015 abuse allegations against fired assistant Zach Smith. Meyer told reporters last week he didn't know anything about the 2015 allegations, but Smith's ex-wife Courtney this week produced text messages she shared with Shelley Meyer about that incident.

Students were reacting to a university investigation of head football coach Urban Meyer regarding his handling of a domestic abuse complaint against a now-fired assistant.

Nate Stewart, a doctoral student in education policy from Detroit, said Meyer should be fired if he knew about abuse allegations leveled against assistant coach Zach Smith in 2015.

Stewart said: ''We have to end this toxic environment of putting football ahead of everything else.''

Monica Sun, a fourth-year biology major from Chicago, said she was upset by the news since Meyer is the face of Ohio State football. She said: ''It doesn't reflect well on him if he chooses to hide something to better a football game or to better a football career, rather than an individual person's safety and mental well-being.''

Ohio State will try to determine what Meyer knew about 2015 abuse allegations against former assistant Zach Smith and when he knew it.

The Ohio-based restaurant chain announced this week that Meyer would appear in ads as the ''head breakfast coach.'' But that partnership was nullified Thursday amid a university investigation into Meyer's handling of domestic abuse allegations against a former assistant coach.

The company tweeted that it was ''suspending the current partnership with Urban Meyer and removing all related content pending the results of the official Ohio State University investigation.''

Ohio State is investigating claims that Meyer's wife knew about 2015 allegations of abuse against former Buckeyes assistant Zach Smith, who was fired last week. Meyer told reporters he didn't know about the 2015 allegations until just before Smith was fired.

The clerk's office in Delaware County says the next hearing on the case is now scheduled for Sept. 14. The office didn't know why the Friday hearing was canceled and attorneys for Zach Smith and ex-wife Courtney didn't respond to messages left Thursday.

Courtney Smith was granted a temporary restraining order on July 20 after accusing her ex-husband of stalking and intimidation. Zach Smith hasn't been charged with assaulting her or convicted of a crime.

Smith was a longtime assistant to coach Urban Meyer, who is now being investigated by the university for his handling of 2015 allegations of domestic abuse by Smith. Meyer is on paid administrative leave.

Jay Paterno, the son of late Penn State coach Joe Paterno, came out in defense of Urban Meyer, writing in a blog post that ''We should wait for facts'' before calling for the Buckeyes' coach to be fired.

Joe Paterno's career four-decade career as Penn State coach ended when he was swept up into the Jerry Sandusky child sexual abuse scandal. Paterno was fired amid questions about how much he knew about Sandusky's past crimes and whether he acted appropriately with allegations he was told of by an assistant coach.

Paterno writes: ''As Penn Staters, we've seen the forces of innuendo, implication and allegation damage the lives and careers of good innocent people.'' He says Americans should demand more.

Paterno was an assistant coach to his father and is currently an elected Penn State trustee.

Ohio State plans to keep reporters away from its football team while it investigates coach Urban Meyer's handling of a longtime assistant accused of domestic violence.

The university canceled a media availability set for the opening of preseason practice on Friday.

Ohio State had planned to allow the media to watch and record the first part of practice on Friday and then interview selected players and coaches afterward. But that changed Thursday, with a spokesman saying in an email that ''due to the ongoing investigation, football coaches and student-athletes will not be available for interviews until further notice and all practices will be closed.''

Ohio State is investigating claims that Meyer's wife knew about 2015 allegations of abuse against former Buckeyes assistant Zach Smith, who was fired last week. Meyer told reporters last week that he didn't know about the 2015 allegations until just before Smith was fired.

A contract extension given to Ohio State coach Urban Meyer in March could provide grounds for the university to fire him over the handling of a longtime assistant accused of domestic violence.

The extension signed March 27 added a requirement to Meyer's contract that he immediately report any ''known violations'' of Ohio State's sexual misconduct policy. The contract lists ''intimate violence and stalking'' as violations.

Meyer is on administrative leave while Ohio State investigates claims that Meyer's wife knew about 2015 allegations of abuse against former Buckeyes assistant Zach Smith, who was fired last week.

Meyer previously told reporters last week that he was never told anything about the incident that resulted in injuries to Smith's ex-wife, Courtney.

Ohio State expects to open fall camp as scheduled on Friday - but without coach Urban Meyer.

Meyer was put on administrative leave on Wednesday over the handling of a longtime assistant who has been accused of domestic violence. Co-offensive coordinator Ryan Day will run the team while Ohio State investigates claims that Meyer's wife knew about 2015 allegations of abuse against former Buckeyes assistant Zach Smith, who was fired last week.

Meyer told reporters last week that he didn't know anything about the incident that resulted in injuries to Smith's ex-wife, Courtney.

Meyer's wife, Shelley Meyer, is an instructor at Ohio State and a registered nurse.

Both Meyers could be in violation of Ohio State's Title IX sexual misconduct policy on reporting allegations of domestic violence made of university employees.

Coincidentally, Zach Smith is scheduled for a hearing Friday on a domestic protection order his ex-wife sought on July 20. His attorney didn't respond to messages Thursday.

Urban Meyer's Ohio State program has been one of the best in college football and for the most part has avoided major off-field issues and player behavior problems that tarnished his championship teams at Florida.

Now Meyer appears to be in jeopardy of losing his job as Buckeyes coach over the handling of a longtime assistant who has been accused of domestic violence.

Ohio State placed Meyer on paid administrative leave Wednesday while it investigates claims that his wife knew about allegations of abuse against former Buckeyes assistant Zach Smith, who was fired last week.

Courtney Smith said she did not know if Shelley Meyer told Urban Meyer about the allegations against Zach Smith, who has never been convicted of a crime or charged with assaulting his ex-wife.

Zach Smith's attorney, Brad Koffel, said in a statement to ESPN: ''Once he gets his chance to tell his side of events, don't be surprised when it is corroborated by every police who ever responded to Ms. Smith's calls.''

What You Need to Know: Big Ten Begins
Here comes the Big Ten, featuring a top 25 matchup and the return of Justin Fields in its debut weekend.
19 hours ago