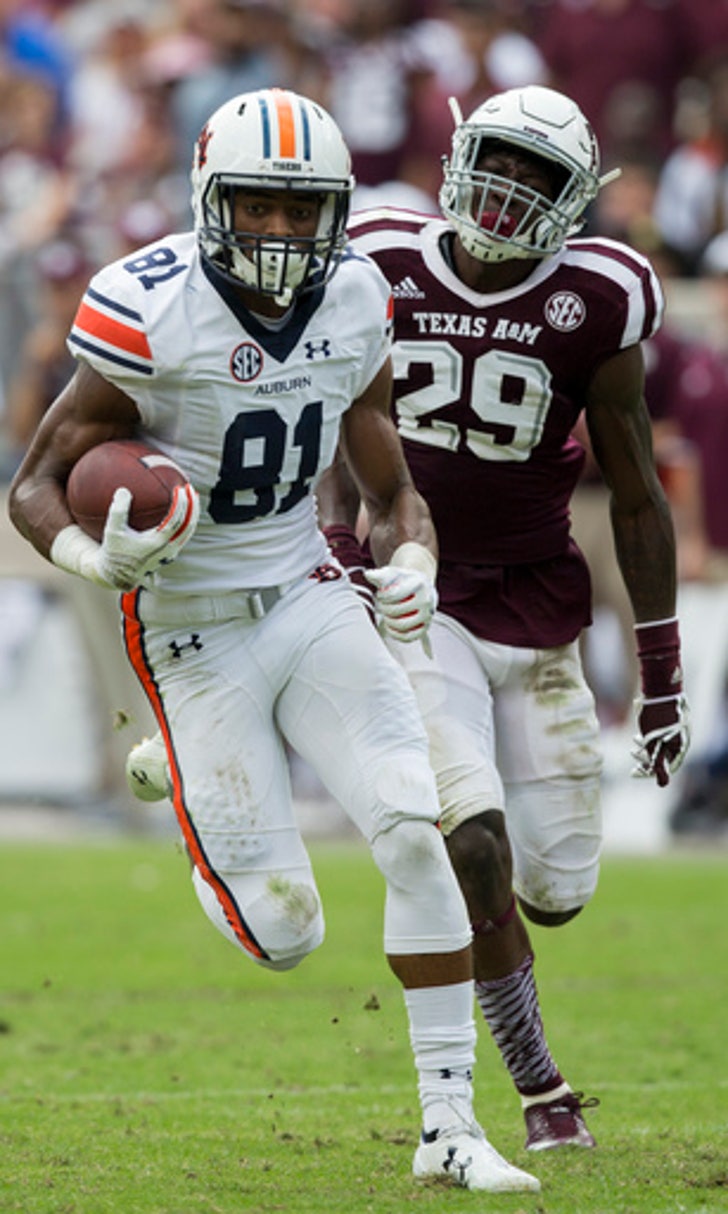 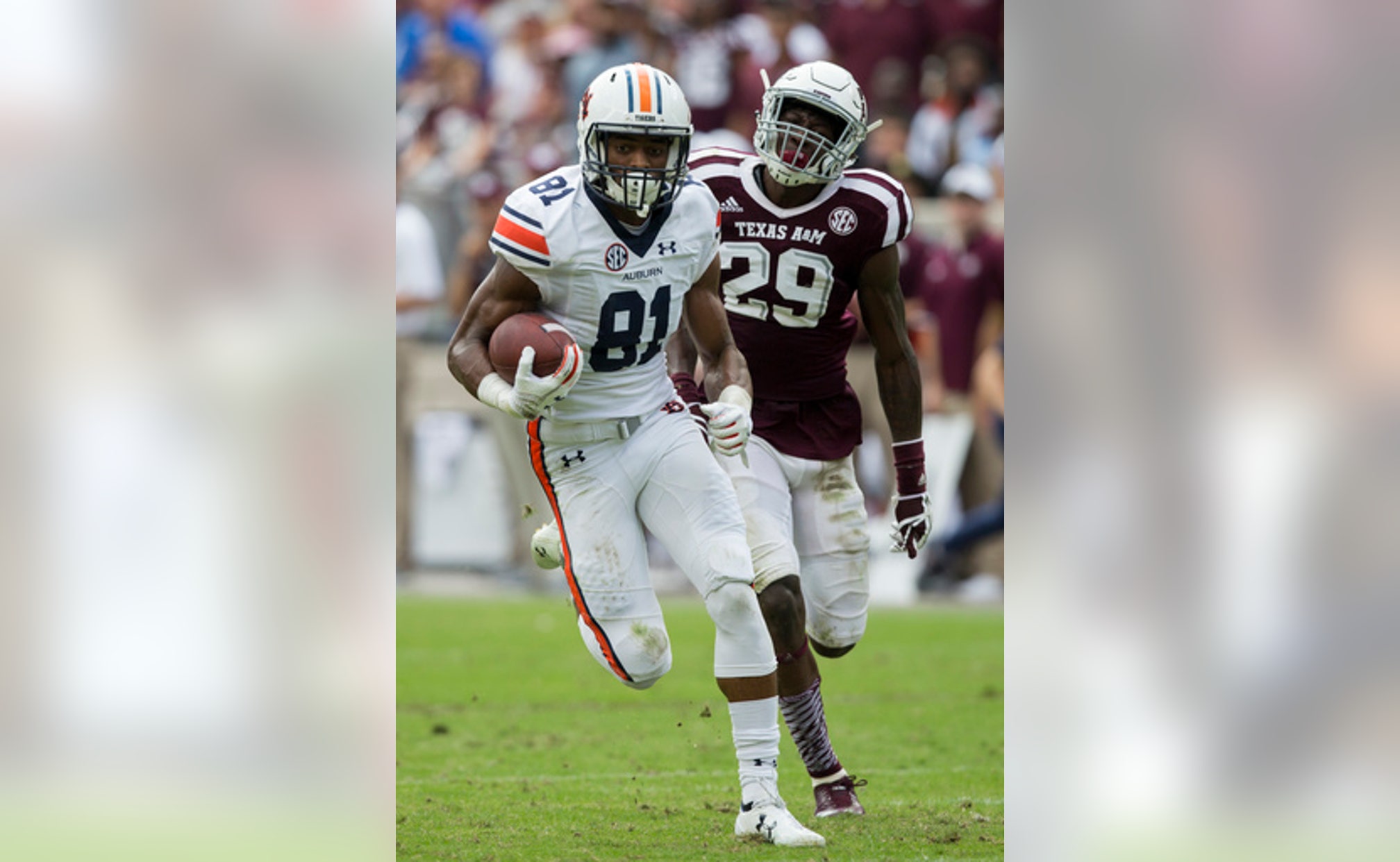 COLLEGE STATION, Texas (AP) When Auburn coach Gus Malzahn has had championship teams in the past he's seen the players take things up a notch this time of year.

In a win over Texas A&M on Saturday he saw that quality in his 16th-ranked team, and it left him feeling encouraged with a huge test looming next week against No. 2 Georgia.

Jarrett Stidham threw for 268 yards and three touchdowns as Auburn pulled away in the second half and cruised to a 42-27 win over Texas A&M.

Kerryon Johnson added 145 yards rushing and a touchdown and provided a highlight-reel play with a nifty one-handed catch for an 11-yard gain on third down in the fourth to keep a drive going.

Eli Stove capped that possession with a 4-yard touchdown run that pushed the lead to 42-20 to put the game out of reach. That possession came after Auburn's defense stopped the Aggies on fourth down from the 4.

''We talked about a championship urgency,'' Malzahn said. ''This time of year the championship teams we've had have found ways to raise their level. And the defense did that in that area - in that spot right there - and the offense followed it up ... that makes you feel real good.''

Auburn (7-2, 5-1 Southeastern Conference, CFP No. 14) led by eight at halftime and made it 28-13 when Stidham connected with Ryan Davis on a 4-yard touchdown reception early in the third quarter.

The Aggies (5-4, 3-3) were forced to punt on their next drive and Shane Tripucka, who had a punt blocked for a touchdown in the first half, didn't get this one off cleanly either and it went just 16 yards to give Auburn good field position.

Malzahn thought that the blocked punt for a touchdown was one of the most important plays of the game.

''It changed the whole momentum of the game going into halftime,'' he said of the play that put the Tigers up 21-13.

Darius Slayton beat A&M's defenders for the second time soon after that, and Stidham found him for a 46-yard reception to set up a 2-yard TD run by Johnson to extend the lead to 35-13.

Coach Kevin Sumlin benched freshman quarterback Kellen Mond in the second quarter after went 5 for 11 for 16 yards. Nick Starkel, who opened the season as the starter before breaking his ankle in the opener, took over and threw for 184 yards and two scores.

''It was time to give somebody else a chance and I think Nick took advantage of that today,'' Sumlin said.

AUBURN: The Tigers handled business against unranked Texas A&M, but will need to improve and limit big plays if they hope to compete against Georgia next week and top-ranked Alabama later this month.

TEXAS A&M: Sumlin said that Starkel ''earned his spot back'' on Saturday and will start next week for A&M. He said Saturday was the first day that Starkel seemed like he was back to form after recovering from his ankle injury.

Former A&M star Myles Garrett, who was selected first overall by Cleveland in this year's NFL draft, served as honorary captain on Saturday. The defensive end was off this weekend because the Browns had their bye.

With Saturday's loss, the best the Aggies could finish with is eight wins. If they do, it would be the fourth straight year where they've had eight wins, raising questions about when they'll take the next step under Sumlin. The sixth-year coach admitted that it's disappointing that they haven't been able to improve each year, but added that he can't worry about that while coaching such a young team.

The Tigers should maintain their spot in the poll or could move up with several ranked teams playing each other later on Saturday as they head into next week's matchup with the Bulldogs.

TEXAS A&M: The Aggies take a break from SEC play when they host New Mexico next Saturday before traveling to Mississippi on Nov. 18.

Alabama Steamrolls Auburn In Iron Bowl
The Crimson Tide were in national title form despite Nick Saban's first career absence, as the offense couldn't be stopped.
5 days ago

Tough To Go Against The Tide
Top-ranked Alabama has looked unstoppable. Can rival Auburn find any way to stop the Tide in Saturday's Iron Bowl?
November 26

A Blueprint For Georgia?
The No. 4 Bulldogs shut down rival No. 7 Auburn once more, and might have showed their three keys to success along the way.
October 3
those were the latest stories
Want to see more?
View All Stories
Fox Sports™ and © 2020 Fox Media LLC and Fox Sports Interactive Media, LLC. All rights reserved. Use of this website (including any and all parts and components) constitutes your acceptance of these Terms of Use and Updated Privacy Policy. Advertising Choices. Do Not Sell my Personal Info