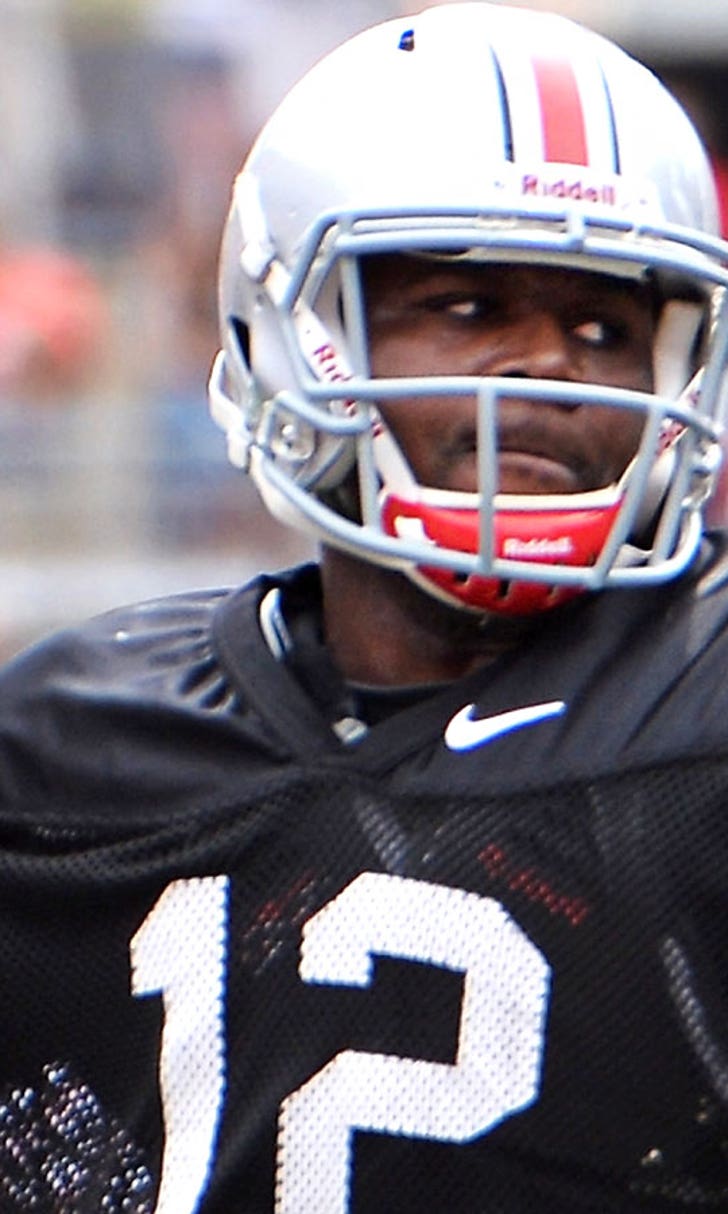 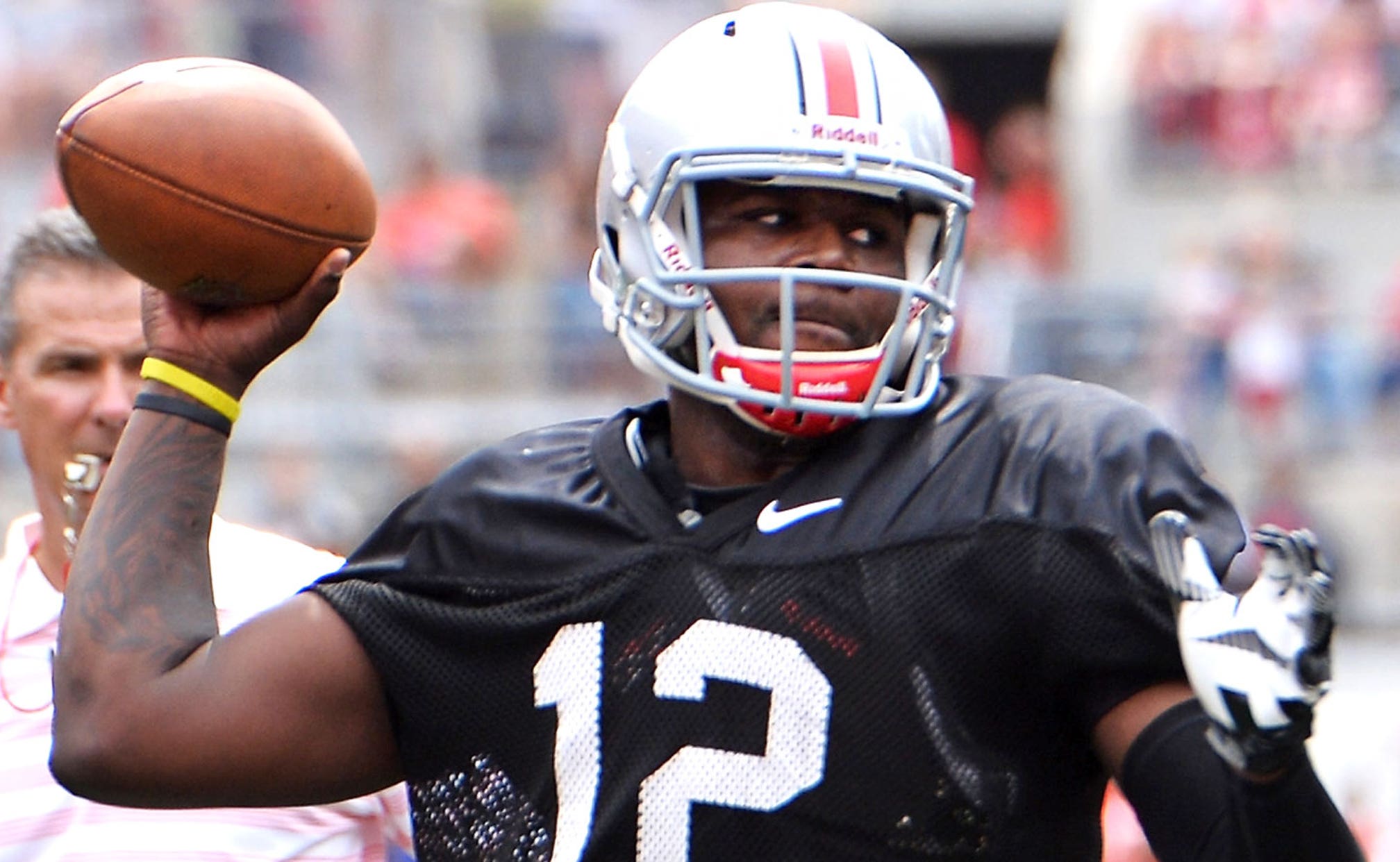 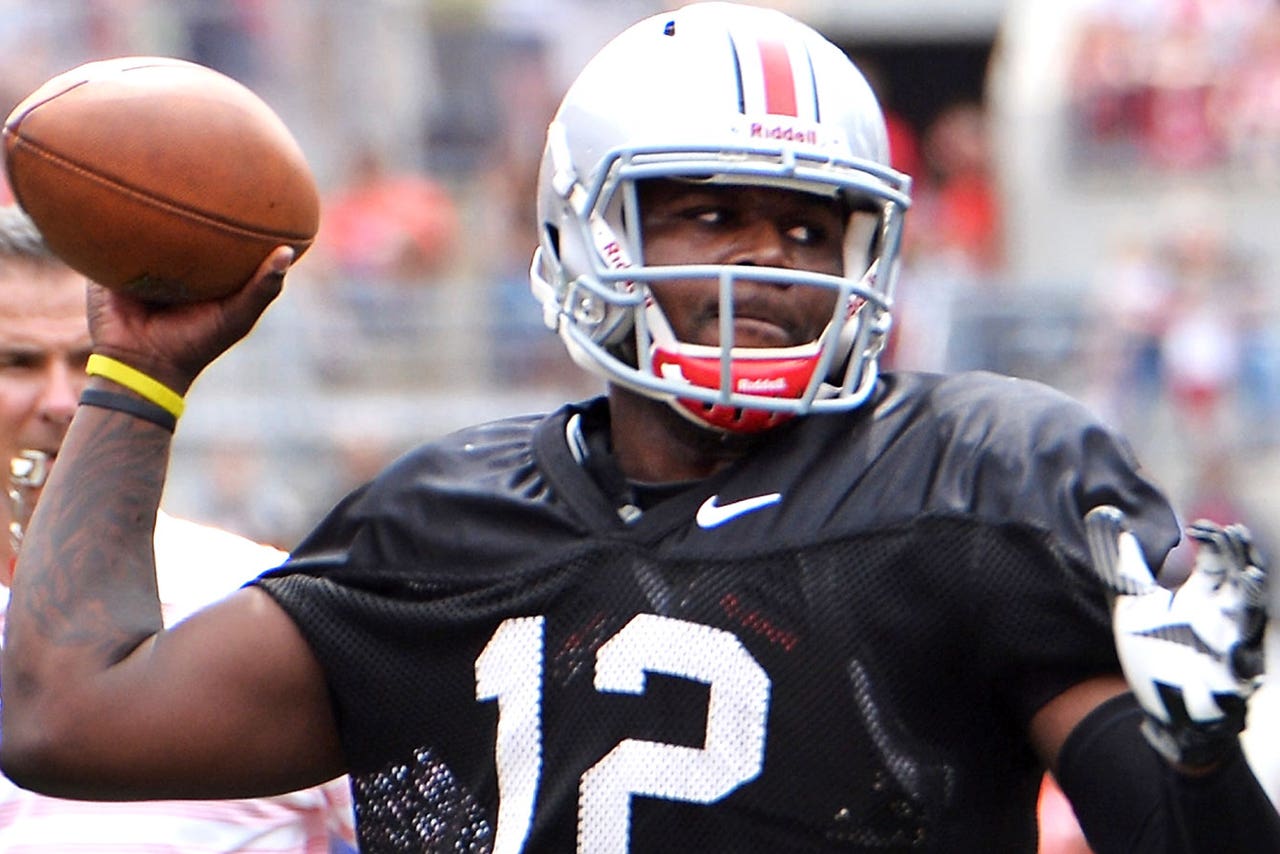 Already a statewide celebrity after guiding Ohio State to three postseason wins and the national championship last season, Cardale Jones made the most of his very first collegiate start at home.

The senior-to-be completed 19 of 42 passes for 304 yards and two touchdowns to Corey Smith to lead the Gray to a 17-14 win over the Scarlet before a national spring-game record crowd of 99,391 at Ohio Stadium.

Jones also won a halftime quarterback challenge. But he was far from perfect, throwing two interceptions and being sacked three times.

Coach Urban Meyer was enthused about what specific players did in 15 spring workouts, but not so much by how far the Buckeyes progressed.

''As I just told our players is that we did not improve as a team. That was not a good team out there. As a team, that's much worse than what you saw in January, obviously,'' he said, referring to the Buckeyes' 42-20 win over Oregon in the College Football Playoff championship game. ''But we did individually get better.''

Defense dominated the spring game as the offenses were hampered by injuries. Erik Smith intercepted two passes and Nick Conner picked off a pass and forced a fumble for the Gray, while Joey Bosa, Adolphus Washington and Donovan Munger had sacks for the Scarlet.

Many of the Buckeyes' top players did not see action because they are recovering from surgery or injuries, including tailback Ezekiel Elliott (hand), quarterbacks Braxton Miller (shoulder) and J.T. Barrett (broken ankle), wide receiver Michael Thomas (groin) and several starting linemen.

The game, with tickets costing $5 for admission and $15 for a reserved seat, was played under sunny skies with temperatures in the 70s. The attendance surpassed the 95,722 at the 2009 spring game at Ohio Stadium, the previous high.

Jones, who took over after Miller missed the season and Barrett was hurt in the Michigan game, was off limits to tacklers and he passed on almost every down.

''Early, he was missing on a few things,'' said offensive line coach and co-coordinator Ed Warinner. ''He was just a little bit off early and then he got some rhythm and hit some big plays.''

Jones, who could have elected to go into the NFL Draft but decided to return for his final year of eligibility, hit Smith on a 58-yard scoring pass with a minute left in the half and then won the game with a 37-yard throw to Smith with 3:43 remaining in the final period with a running clock.

Much of the action did not take place during the glorified practice. There was a circle drill before the game in which players squared off at midfield and attempted to block each other, with All-American defensive end Bosa bumping helmets with offensive tackle Taylor Decker. A quarterbacks challenge at halftime featured Jones and Barrett against former Buckeyes Heisman Trophy winner Troy Smith, with Jones winning the distance competition with a 74-yard heave. There were also races to determine if students could outrun the fastest Ohio State players (they could not, with Elliott edging Miller with the students far behind) and there was also a pushup contest featuring students at midfield.

Fourth-string quarterback Stephen Collier tossed a 35-yard scoring pass to Terry McLaurin at the end of the half to cut the lead to 10-7.

Collier, who was 15 of 33 for 157 yards with three interceptions, flipped a shovel pass to Parris Campbell for a 3-yard touchdown on the last play of the third quarter.

Even the game had light moments. At one point in the first quarter, Tyvis Powell - Jones' roommate - intercepted one of Jones' passes and returned it 38 yards before being run out of bounds by Jones. Powell then pretended to take a selfie while hugging his roomie.